Pasadena, Calif.—The brain—awake and sleeping—is awash in electrical activity, and not just from the individual pings of single neurons communicating with each other. In fact, the brain is enveloped in countless overlapping electric fields, generated by the neural circuits of scores of communicating neurons. The fields were once thought to be an "epiphenomenon" similar to the sound the heart makes—which is useful to the cardiologist diagnosing a faulty heart beat, but doesn't serve any purpose to the body, says Christof Koch, the Lois and Victor Troendle Professor of Cognitive and Behavioral Biology and professor of computation and neural systems at the California Institute of Technology (Caltech).

New work by Koch and neuroscientist Costas Anastassiou, a postdoctoral scholar in biology, and his colleagues, however, suggests that the fields do much more—and that they may, in fact, represent an additional form of neural communication.

"In other words," says Anastassiou, the lead author of a paper about the work appearing in the journal Nature Neuroscience, "while active neurons give rise to extracellular fields, the same fields feed back to the neurons and alter their behavior," even though the neurons are not physically connected—a phenomenon known as ephaptic (or field) coupling. "So far, neural communication has been thought to occur almost entirely via traffic involving synapses, the junctions where one neuron connects to the next one. Our work suggests an additional means of neural communication through the extracellular space independent of synapses."

Extracellular electric fields exist throughout the living brain. Their distant echoes can be measured outside the skull as EEG waves. These fields are particularly strong and robustly repetitive in specific brain regions such as the hippocampus, which is involved in memory formation, and the neocortex, the area where long-term memories are held. "The perpetual fluctuations of these extracellular fields are the hallmark of the living and behaving brain in all organisms, and their absence is a strong indicator of a deeply comatose, or even dead, brain," Anastassiou explains.

Previously, neurobiologists assumed that the fields were capable of affecting—and even controlling—neural activity only during severe pathological conditions such as epileptic seizures, which induce very strong fields. Few studies, however, had actually assessed the impact of far weaker—but very common—non-epileptic fields. "The reason is simple," Anastassiou says. "It is very hard to conduct an in vivo experiment in the absence of extracellular fields," to observe what changes when the fields are not around.

To tease out those effects, Anastassiou and his colleagues focused on strong but slowly oscillating fields, called local field potentials (LFP), that arise from neural circuits composed of just a few rat brain cells. Measuring those fields and their effects required positioning a cluster of tiny electrodes within a volume equivalent to that of a single cell body—and at distances of less than 50 millionths of a meter from one another; this is approximately the width of a human hair.

"Because it had been so hard to position that many electrodes within such a small volume of brain tissue, the findings of our research are truly novel," Anastassiou says. Previously, he explains, "nobody had been able to attain this level of spatial and temporal resolution."

An "unexpected and surprising finding was how already very weak extracellular fields can alter neural activity," he says. "For example, we observed that fields as weak as one volt per meter robustly alter the spiking activity [firing] of individual neurons, and increase the so-called 'spike-field coherence'"—the synchronicity with which neurons fire. "Inside the mammalian brain, we know that extracellular fields may easily exceed two to three volts per meter. Our findings suggest that under such conditions, this effect becomes significant."

What does that mean for brain computation? At this point we can only speculate, Koch says, "but such field effects increase the synchrony with which neurons become active together. This, by itself, enhances the ability of these neurons to influence their target and is probably an important communication and computation strategy used by the brain."

Can external electric fields have similar effects on the brain? "This is an interesting question," Anastassiou says. "Indeed, physics dictates that any external field will impact the neural membrane. Importantly, though, the effect of externally imposed fields will also depend on the brain state. One could think of the brain as a distributed computer—not all brain areas show the same level of activation at all times.

"Whether an externally imposed field will impact the brain also depends on which brain area is targeted," he says. "During epileptic seizures, the hypersynchronized activity of neurons can generate field as strong as 100 volts per meter, and such fields have been shown to strongly entrain neural firing and give rise to super-synchronized states." And that suggests that electric field activity—even from external fields—in certain brain areas, during specific brain states, may have strong cognitive and behavioral effects.

Ultimately, Anastassiou, Koch, and their colleagues would like to test whether ephaptic coupling affects human cognitive processing, and under which circumstances. "I firmly believe that understanding the origin and functionality of endogenous brain fields will lead to several revelations regarding information processing at the circuit level, which, in my opinion, is the level at which percepts and concepts arise," Anastassiou says. "This, in turn, will lead us to address how biophysics gives rise to cognition in a mechanistic manner—and that, I think, is the holy grail of neuroscience." 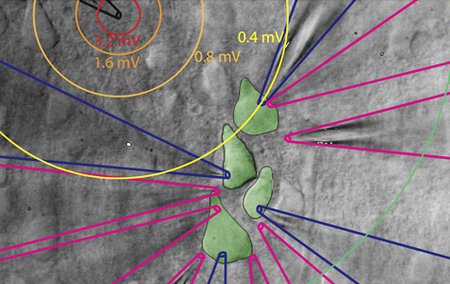 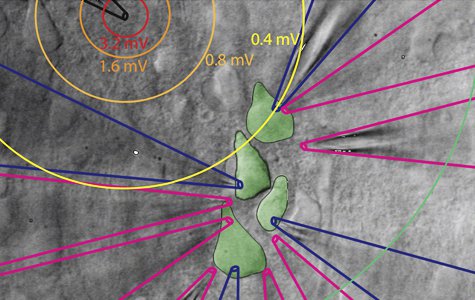