The Neural Codes for Body Movements

A small patch of neurons in the brain can encode the movements of many body parts, according to researchers in the laboratory of Caltech's Richard Andersen, James G. Boswell Professor of Neuroscience, Tianqiao and Chrissy Chen Brain-Machine Interface Center Leadership Chair, and Director of the T&C Brain-Machine Interface Center of the Tianqiao and Chrissy Chen Institute for Neuroscience at Caltech. Understanding this neural code could help improve the lives of people with paralysis or with motor deficits from neurological diseases such as a stroke.

The findings appear in a paper available online in the July 20 edition of Neuron.

The motor cortex, the region of the brain that governs movement, lies at the end of the sensory-to-motor pathway and controls the muscles of the body. Earlier on that pathway is the posterior parietal cortex (PPC), a high-level cognitive area that encodes the intention to move. When a person intends to drink from a glass of water, for example, the signal for this intention in the PPC is transmitted to the motor cortex, which sends signals down the spinal cord and to the proper limbs. In 2015, Andersen and collaborators successfully implanted tiny prosthetic devices into the PPC of paralyzed patients; these so-called neuroprosthetics measure the movement intentions of the patient—to pick up a cup to take a drink, for example—and execute those movements accurately with a robotic arm.

For the current work, the researchers aimed to discover how the PPC encodes and organizes neural information about other body movements, such as grasping a cup with the left versus right hand, or imagining versus attempting certain bodily movements.

To do this, the researchers implanted a four-by-four-millimeter chip composed of 96 electrodes into a subdivision of the PPC called the anterior intraparietal area (AIP), to measure the neural activity of a tetraplegic human who volunteered to take part in a brain-machine interface clinical trial. Traditionally, the AIP has been thought to specialize in grasping objects. However, the researchers found that AIP coded for more than just grasps.

"We found that different neurons in the AIP were indeed selective for different grasps, but we also found activation for shoulder or hand movements, whether imagined or attempted, and for either side of the body," Andersen says. "In fact, a portion of the cells were even tuned to speech movements. This was truly amazing to find so much information contained in such a small population of neurons."

"This compact code was made possible by so-called mixed encoding," says co-lead author Tyson Aflalo, senior scientific researcher at Caltech and executive director of the T&C Brain-Machine Interface Center. "In mixed coding, single neurons will respond to a diverse mixture of actions, or variables. For instance, a single neuron may respond for imagined movement of both the left hand and right shoulder. One breakthrough of our study is that we found that mixed-codes can be highly structured."

Previous descriptions of mixed coding assumed that variables were randomly mixed among neurons. However, Andersen's team discovered that there is a highly structured organization of the mixing of variables that is determined by the part of the body, or effector, being moved.

"The effectors are encoded in a largely independent manner within the neural population—a property we call functional segregation," says Caltech graduate student and co-lead author Carey Zhang. "Body side and cognitive strategy—whether the subject attempted or only imagined movement—are organized (highly correlated) within the effector representations. For instance, if a neuron responds to a right hand attempted movement activation, it is also more likely to respond to a left hand attempted movement."

"The functional segregation of effectors may provide for more efficient neural computations and learning," says Andersen. "For instance, because hand dynamics are similar for the left and right hand, learning with one hand should easily be transferred to the other."

Thanks to the functional segregation, Zhang says, learning a new hand gesture only affects the hand and would not produce spurious movements of the shoulder, for example.

According to the researchers, this area of the PPC is likely still primarily oriented toward grasp processing. However, the PPC is connected to many other areas—it is a so-called association cortical area—and thus the multitude of body signals may reflect the coordination of multiple cortical areas. This provides an advantage from a neural prosthetics perspective, Andersen says, as a small implant sampling a small number of neurons can provide information for many types of intended movements.

The overlap of the cognitive strategies of imagined and attempted movement has important implications. "Athletes such as gymnasts often imagine sequences of movements and use that for training," Aflalo says. "We have found that this imagination is actually activating the same neural circuits that govern the movement itself—though not in an entirely identical way, so we can still tell them apart."

"The hope is that this understanding of the neural code in the PPC can be applied not only to paralysis but to other kinds of motor deficits from neurological diseases, such as difficulty moving after a stroke," says Andersen. "That's our main thrust, to improve the lives of people with traumatic brain injury, strokes, peripheral neuropathies, and other kinds of paralytic diseases." 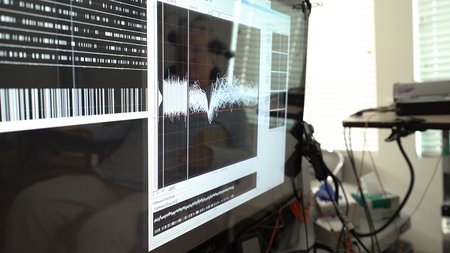 The study participant watches the activity of one of her neurons in real time. Brain-machine interfaces can interpret the neural activity of a subject's thoughts and translate them into robotic movement. Credit: Caltech 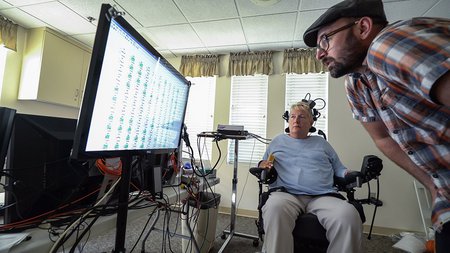 Tyson Aflalo, senior scientific researcher at Caltech and executive director of the T&C Brain-Machine Interface Center, discusses with the study participant how her neurons were responding during a task. Credit: Caltech
Image Gallery Lightbox 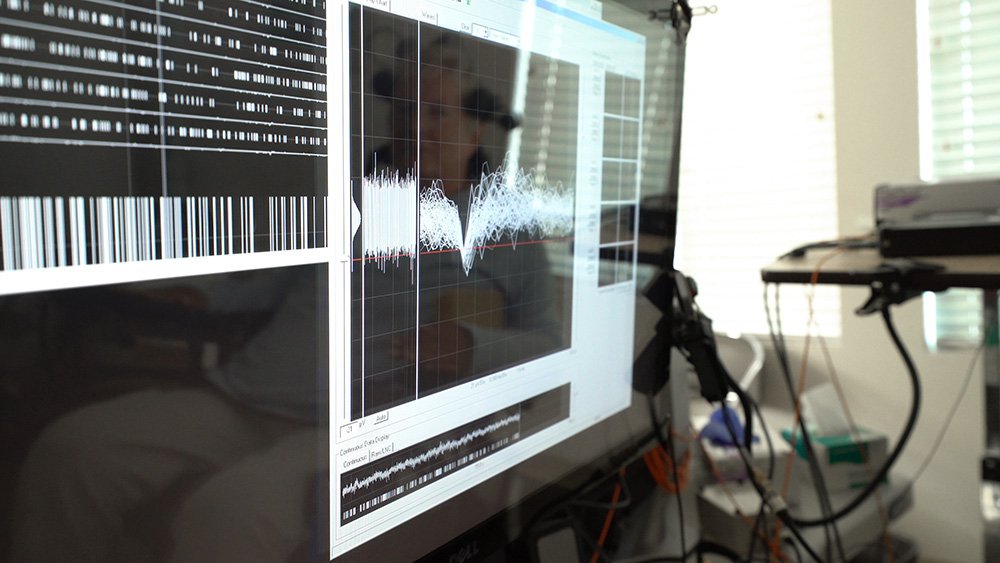 The study participant watches the activity of one of her neurons in real time. Brain-machine interfaces can interpret the neural activity of a subject's thoughts and translate them into robotic movement.
Credit: Caltech
Download Full Image 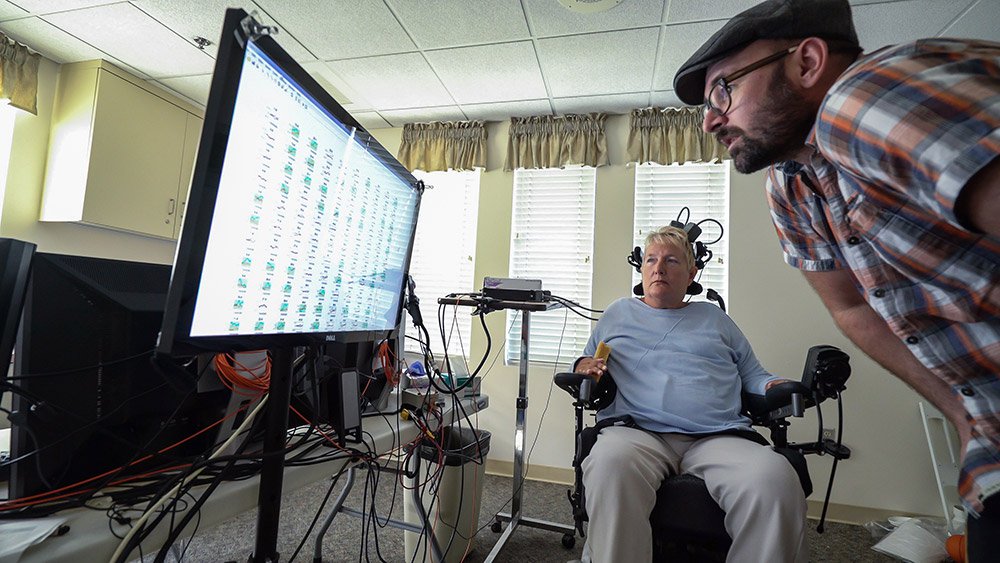 Tyson Aflalo, senior scientific researcher at Caltech and executive director of the T&C Brain-Machine Interface Center, discusses with the study participant how her neurons were responding during a task.
Credit: Caltech
Download Full Image