Skip to main content
Home  /  About  /  News  /  A Mind-Controlled Exoskeleton

Richard Andersen has received a grant from the National Science Foundation's Frontier program to develop a brain-machine interface that could translate the neural intention to walk into the movement of prosthetic legs. The work is a collaboration between Caltech, the Keck School of Medicine of USC, and the University of California, Irvine (UCI). The principal investigator is professor Payam Heydari, UCI professor of electrical engineering & computer science. The technology is still in its developmental phases, but could one day help paraplegics to walk again.

"People with spinal cord injuries do not have sensation in their legs, and must look at their feet when using manually controlled prosthetic legs since they do not receive normal sensory feedback," says Andersen, James G. Boswell Professor of Neuroscience, T&C Chen Brain-Machine Interface Center Leadership Chair, and director of the T&C Chen Brain-Machine Interface Center. "This makes it difficult to use such an exoskeleton. However, the brain-machine interface we are working on will be bidirectional: it allows neurons to control an exoskeleton, and also gives neurons the feedback of sensation in the region of the brain's cortex where the leg is represented. The stimulation-based sensory feedback is the main component of our lab's involvement in the project."

"The present approach develops a technological solution to paralysis by creating a new path for the brain to interact directly with the external environment," says co-investigator Charles Liu, professor of clinical neurological surgery at the Keck School of Medicine of USC and director of the USC Neurorestoration Center. "This novel approach will synergize with parallel strategies such as neural repair and optimization."

"The goal of this multidisciplinary project is to create an implantable system that can enable patients with spinal cord injury to walk and regain feeling in their legs by circumventing the damaged portion of the spinal cord," says Heydari. 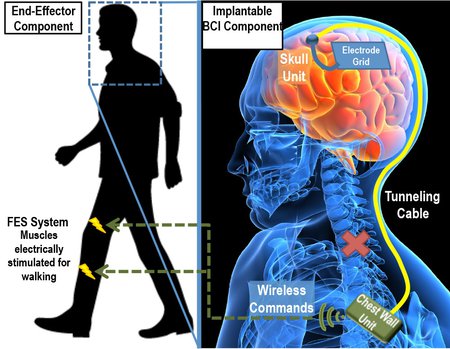 A schematic of how a brain-machine interface might interact with prosthetic legs. Credit: Courtesy of Payam Heydari
Image Lightbox 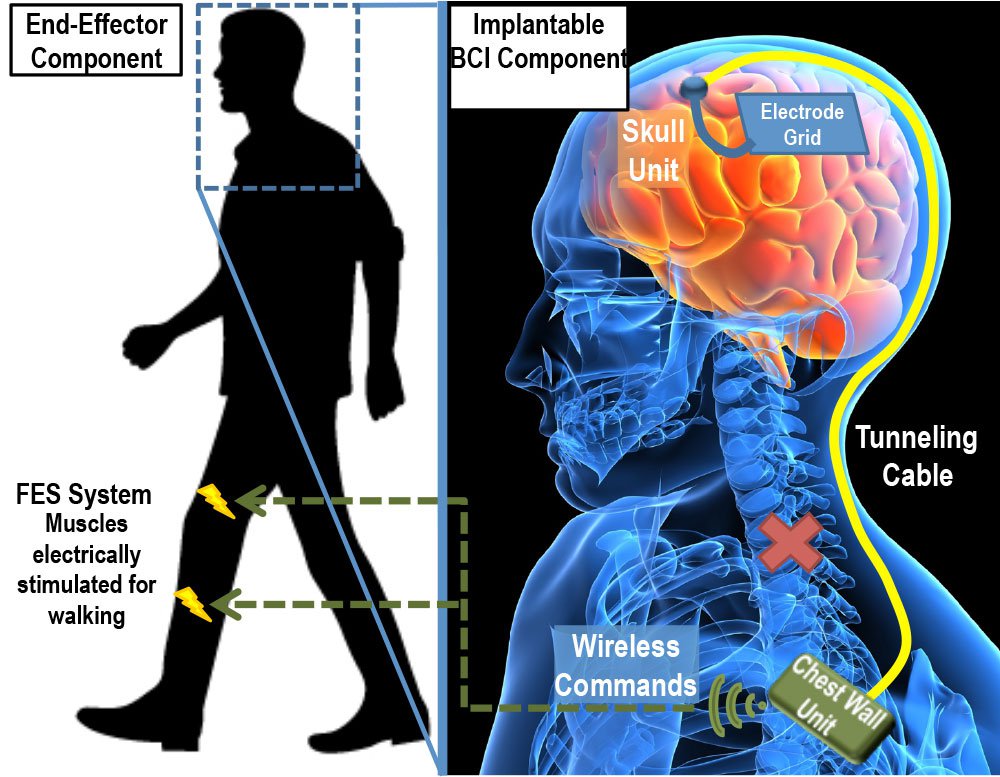