Skip to main content
Home  /  About  /  News  /  Megafloods: What They Leave Behind

Megafloods: What They Leave Behind

South-central Idaho and the surface of Mars have an interesting geological feature in common: amphitheater-headed canyons. These U-shaped canyons with tall vertical headwalls are found near the Snake River in Idaho as well as on the surface of Mars, according to photographs taken by satellites. Various explanations for how these canyons formed have been offered—some for Mars, some for Idaho, some for both—but in a paper published the week of December 16 in the online issue of Proceedings of the National Academy of Sciences, Caltech professor of geology Michael P. Lamb, Benjamin Mackey, formerly a postdoctoral fellow at Caltech, and W. M. Keck Foundation Professor of Geochemistry Kenneth A. Farley offer a plausible account that all these canyons were created by enormous floods.

Canyons in Malad Gorge State Park, Idaho, are carved into a relatively flat plain composed of a type of volcanic rock known as basalt. The basalt originated from a hotspot, located in what is now Yellowstone Park, which has been active for the last few million years. Two canyons in Malad Gorge, Woody's Cove and Stubby Canyon, are characterized by tall vertical headwalls, roughly 150 feet high, that curve around to form an amphitheater. Other amphitheater-headed canyons can be found nearby, outside the Gorge—Box Canyon, Blue Lakes Canyon, and Devil's Corral—and also elsewhere on Earth, such as in Iceland.

To figure out how they formed, Lamb and Mackey conducted field surveys and collected rock samples from Woody's Cove, Stubby Canyon, and a third canyon in Malad Gorge, known as Pointed Canyon. As its name indicates, Pointed Canyon ends not in an amphitheater but in a point, as it progressively narrows in the upstream direction toward the plateau at an average 7 percent grade. Through Pointed Canyon flows the Wood River, a tributary of the larger Snake River, which in turn empties into the Columbia River on its way to the Pacific Ocean.

Geologists have a good understanding of how the rocks in Woody's Cove and Stubby Canyon achieved their characteristic appearance. The lava flows that hardened into basalt were initially laid down in layers, some more than six feet thick. As the lava cooled, it contracted and cracked, just as mud does when it dries. This produced vertical cracks across the entire layer of lava-turned-basalt. As each additional sheet of lava covered the same land, it too cooled and cracked vertically, leaving a wall that, when exposed, looks like stacks of tall blocks, slightly offset from one another with each additional layer. This type of structure is called columnar basalt.

While the formation of columnar basalt is well understood, it is not clear how, at Woody's Cove and Stubby Canyon, the vertical walls became exposed or how they took on their curved shapes. The conventional explanation is that the canyons were formed via a process called "groundwater sapping," in which springs at the bottom of the canyon gradually carve tunnels at the base of the rock wall until this undercutting destabilizes the structure so much that blocks or columns of basalt fall off from above, creating the amphitheater below.

This explanation has not been corroborated by the Caltech team's observations, for two reasons. First, there is no evidence of undercutting, even though there are existing springs at the base of Woody's Cove and Stubby Canyon. Second, undercutting should leave large boulders in place at the foot of the canyon, at least until they are dissolved or carried away by groundwater. "These blocks are too big to move by spring flow, and there's not enough time for the groundwater to have dissolved them away," Lamb explains, "which means that large floods are needed to move them out. To make a canyon, you have to erode the canyon headwall, and you also have to evacuate the material that collapses in."

That leaves waterfall erosion during a large flood event as the only remaining candidate for the canyon formation that occurred in Malad Gorge, the Caltech team concludes.

No water flows over the top of Woody's Cove and Stubby Canyon today. But even a single incident of overland water flow occurring during an unusually large flood event could pluck away and topple boulders from the columnar basalt, taking advantage of the vertical fracturing already present in the volcanic rock. A flood of this magnitude could also carry boulders downstream, leaving behind the amphitheater canyons we see today without massive boulder piles at their bottoms and with no existing watercourses.

Additional evidence that at some point in the past water flowed over the plateaus near Woody's Cove and Stubby Canyon are the presence of scour marks on surface rocks on the plateau above the canyons. These scour marks are evidence of the type of abrasion that occurs when a water discharge containing sediment moves overland.

Taken together, the evidence from Malad Gorge, Lamb says, suggests that "amphitheater shapes might be diagnostic of very large-scale floods, which would imply much larger water discharges and much shorter flow durations than predicted by the previous groundwater theory." Lamb points out that although groundwater sapping "is often assumed to explain the origin of amphitheater-headed canyons, there is no place on Earth where it has been demonstrated to work in columnar basalt."

Closing the case on the canyons at Malad Gorge required one further bit of information: the ages of the rock samples. This was accomplished at Caltech's Noble Gas Lab, run by Kenneth A. Farley, W. M. Keck Foundation Professor of Geochemistry and chair of the Division of Geological and Planetary Sciences.

The key to dating surface rocks on Earth is cosmic rays—very high-energy particles from space that regularly strike Earth. "Cosmic rays interact with the atmosphere and eventually with rocks at the surface, producing alternate versions of noble gas elements, or isotopes, called cosmogenic nuclides," Lamb explains. "If we know the cosmic-ray flux, and we measure the accumulation of nuclides in a certain mineral, then we can calculate the time that rock has been sitting at Earth's surface."

At the Noble Gas Lab, Farley and Mackey determined that rock samples from the heads of Woody's Cove and Stubby Canyon had been exposed for the same length of time, approximately 46,000 years. If Lamb and his colleagues are correct, this is when the flood event occurred that plucked the boulders off the canyon walls, leaving the amphitheaters behind.

Further evidence supporting the team's theory can be found in Pointed Canyon. Rock samples collected along the walls of the first kilometer of the canyon show progressively more exposure in the downstream direction, suggesting that the canyon is still being carved by Wood River. Using the dates of exposure revealed in the rock samples, Lamb reconstructed the probable location of Pointed Canyon at the time of the formation of Woody's Cove and Stubby Canyon. At that location, where the rock has been exposed approximately 46,000 years, the surrounding canyon walls form the characteristic U-shape of an amphitheater-headed canyon and then abruptly narrow into the point that forms the remainder of Pointed Canyon. "The same megaflood event that created Woody's Cove and Stubby Canyon seems to have created Pointed Canyon," Lamb concludes. "The only difference is that the other canyons had no continuing river action, while Pointed Canyon was cut relatively slowly over the last 46,000 years by the Wood River, which is not powerful enough to topple and pluck basalt blocks from the surrounding plateau, resulting in a narrow channel rather than tall vertical headwalls."

The paper presenting these results is entitled "Amphitheater-Headed Canyons Formed by Megaflooding at Malad Gorge, Idaho." The work was supported by grants from the National Science Foundation and NASA. 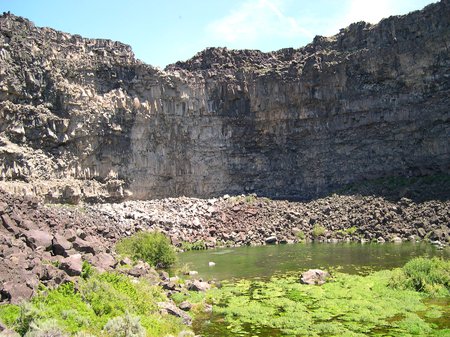 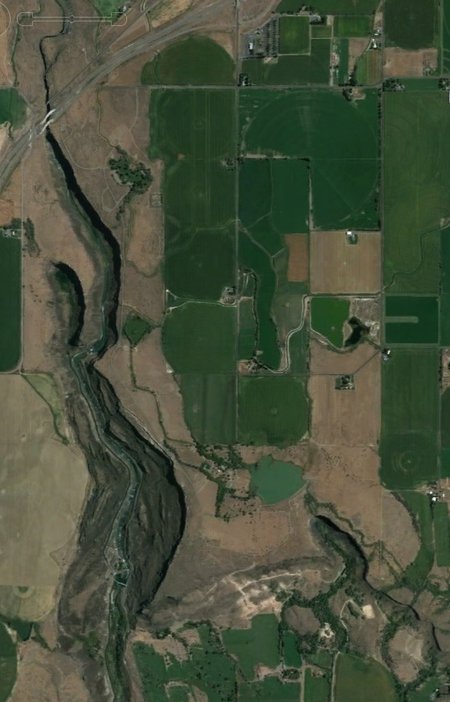 Aerial view of Malad Gorge State Park. Stubby Canyon is on the left; just next to it is Pointed Canyon. In the right foreground is Woody's Cove. Credit: Google Earth 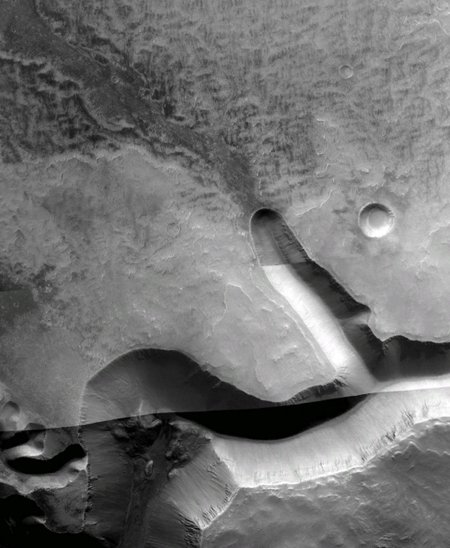 A mosaic image of an amphitheater-headed canyon in the Echus Chasma region on Mars taken by the Context Camera aboard the Mars Reconnaissance Orbiter.. Credit: NASA
Image Gallery Lightbox 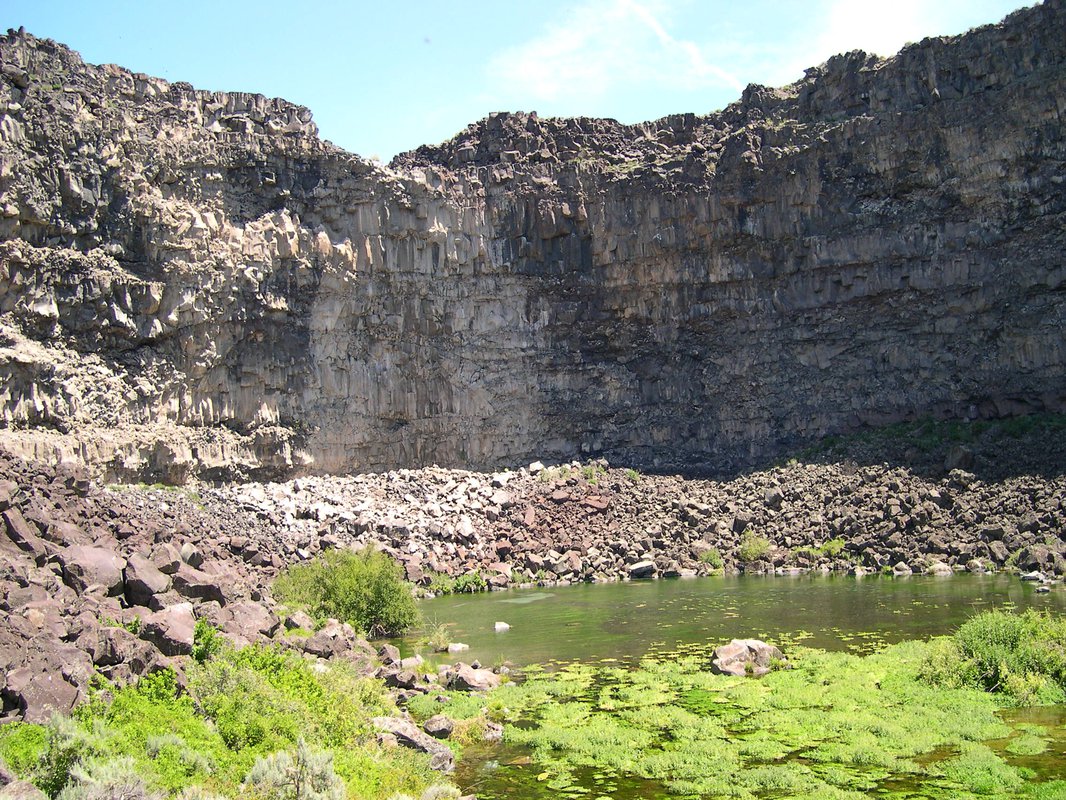 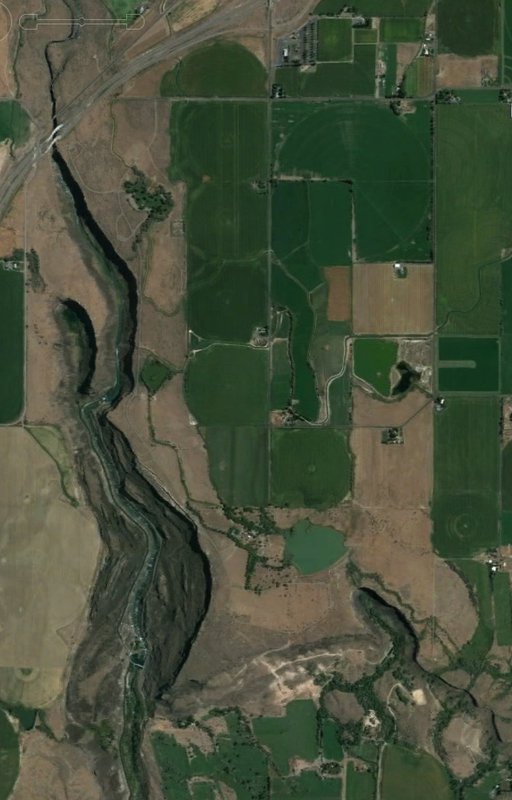 Aerial view of Malad Gorge State Park. Stubby Canyon is on the left; just next to it is Pointed Canyon. In the right foreground is Woody's Cove.
Credit: Google Earth
Download Full Image 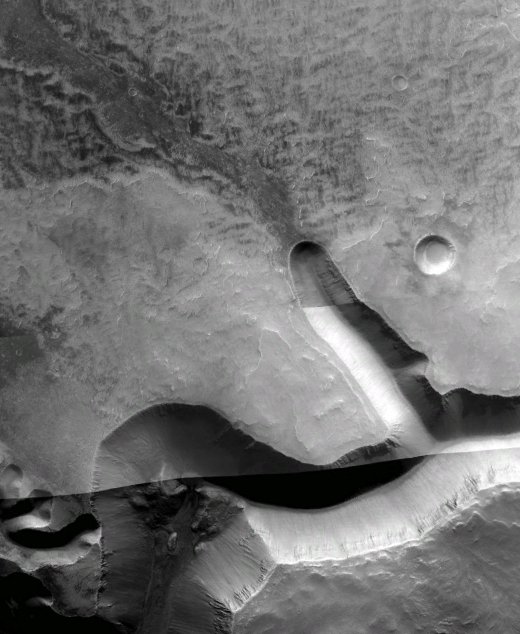 A mosaic image of an amphitheater-headed canyon in the Echus Chasma region on Mars taken by the Context Camera aboard the Mars Reconnaissance Orbiter..
Credit: NASA
Download Full Image