PASADENA—Biologists at MIT and Caltech have uncovered the chemical details of a mechanism that cells use to commit suicide. The work appears in the August 28 issue of the journal Science.

According to David Baltimore, president of Caltech and a Nobel Prize-winning biologist, his lab at MIT has succeeded in describing how roundworms known as nematodes kill off unwanted cells. The work is especially interesting, Baltimore says, because human beings have very similar proteins to those causing cell suicide in nematodes and, in fact, his lab can often substitute human proteins for the same results.

"All cells contain the machinery to commit suicide," Baltimore said prior to publication of the paper. "You can see this in a wide variety of events, such as a tadpole's resorption of its tail, local ischemia in a stroke victim's brain, and tissue destruction after a heart attack.

"Cell suicide is also one of the great protections against cancer." According to the current paper in Science, a common type of apoptosis, or cell suicide, involves three stable proteins found in nematode cells. These proteins are normally quiet, but can be readily triggered by death signals in such a way that the cell digests itself.

The three proteins are known as CED-3, CED-4, and CED-9. None of these proteins alone will kill cells, the research shows, but the three interact in such a way that CED-4 can signal CED-3 to begin the destruction process, while CED-9 acts as an inhibitor to CED-4.

The general outline of this particular pathway of apoptosis was discovered by MIT professor Robert Horvitz some years ago, but the details have never been understood until now, Baltimore says.

"We did all of this with proteins from a nematode where the pathway was first found, but the proteins all have human homologs," Baltimore says. These are Apaf-1, which is very similar to CED-4; Bcl-2, which is a homolog of CED-9; and mammalian cysteine protease zymogens that are analogous to CED-3.

Therefore, the cascade of reactions in nematode cells could very well resemble the manner in which the human body can cause cancerous cells to self-destruct. The work was supported by the National Institutes of Health. In addition to Baltimore, the authors are Xiaolu Yang and Howard Y. Chang. Yang is currently at the University of Pennsylvania. 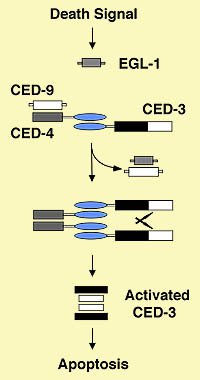 How a nematode cell commits suicide.