ME72: Live and In-Person Once More

Robots from five teams battled one another on the Ramo Auditorium stage on March 10 in a welcome return of a Caltech institution.

The all-day competition was the final exam for the ME72 Engineering Design Laboratory course, which is taught by Michael Mello (PhD '12), a teaching professor of mechanical and civil engineering in the Division of Engineering and Applied Science. Each year, students in the two-term class are asked to design and build robots that meet particular criteria with the goal of having the machines square off in a design competition at the end of the second term.

This was the 37th annual edition of the competition, which—in the years before the pandemic—always drew large crowds of student spectators as well as attention from media outlets. The pandemic did not completely halt ME72, although it did force Mello to adopt an online format for last year's course and the design competition.

The 2020 competition, in which amphibious robots fought for control of towers and a rotating center island in the pond adjacent to Caltech Hall, took place just before education on campus went remote. For 2021, students designed robots with CAD (computer assisted drafting) software. Paul Stovall, supervisor of the Mechanical Engineering Shop, shipped the students manufactured parts based on their designs. Students then individually assembled robots at home and demonstrated functionality to their peers and course instructors through Zoom.

It was not the usual process, but it allowed the course to survive and gave students an opportunity to experience the industrial design–manufacturer–supplier process.

"Fifteen intrepid students signed up in a truly unusual year," Mello says. "But had we not had this course at all, I would've lost a lot of legacy." 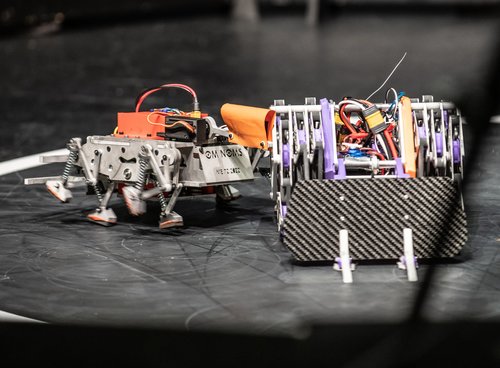 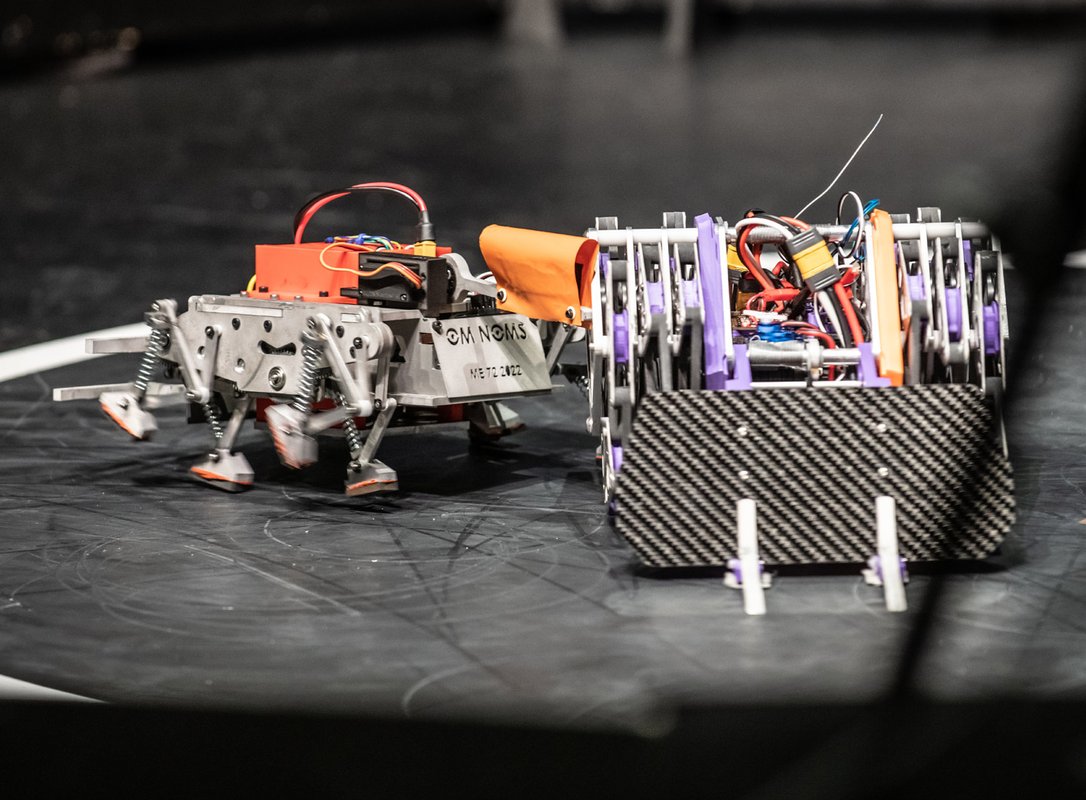 Five of the top graduates of the 2020–21 course became the teaching assistants for this year's course, performing the critical work of designing and building the competition space.

For the 2021–22 class, students—masked and vaccinated—were able to return to working together in person at the Jim Hall Design and Prototyping Lab in the sub-basement of the Eudora Hull Spalding Laboratory of Engineering. This year's challenge was based on an international competition known as "SumoBot," in which robots attempt to push one another out of a ring in a mechanical approximation of the Japanese wrestling sport of sumo.

Student teams designed and built multiple robots suited for three classes of competition: autonomous wheeled robots; radio-controlled wheeled robots; and radio-controlled Strand Bots. Robots in the latter category, like those created in 2021's ME72 challenge, are based on the "Strandbeests" created by Dutch artist Theo Jansen. They do not have an international robot sumo counterpart and thus were unique to this year's ME72 experience.

In this case, the ring (or "dohyō") included a thin metallic layer that allowed students to integrate magnets into the chassis of their bots to give them additional traction.

Five teams of six to seven students each competed: MAJOR SSAƧƧ, MATAWARI, OM NOMS, PAGE AGAINST THE MACHINE, and PIZZA TIME. Dozens of students filled Ramo to observe the event, which was also livestreamed. 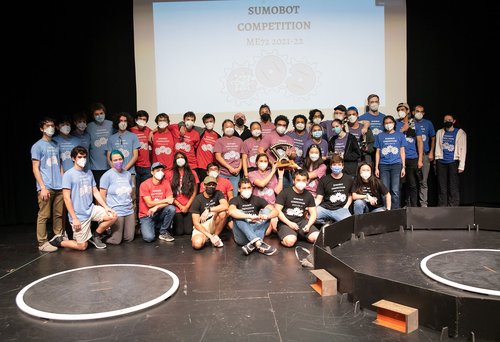 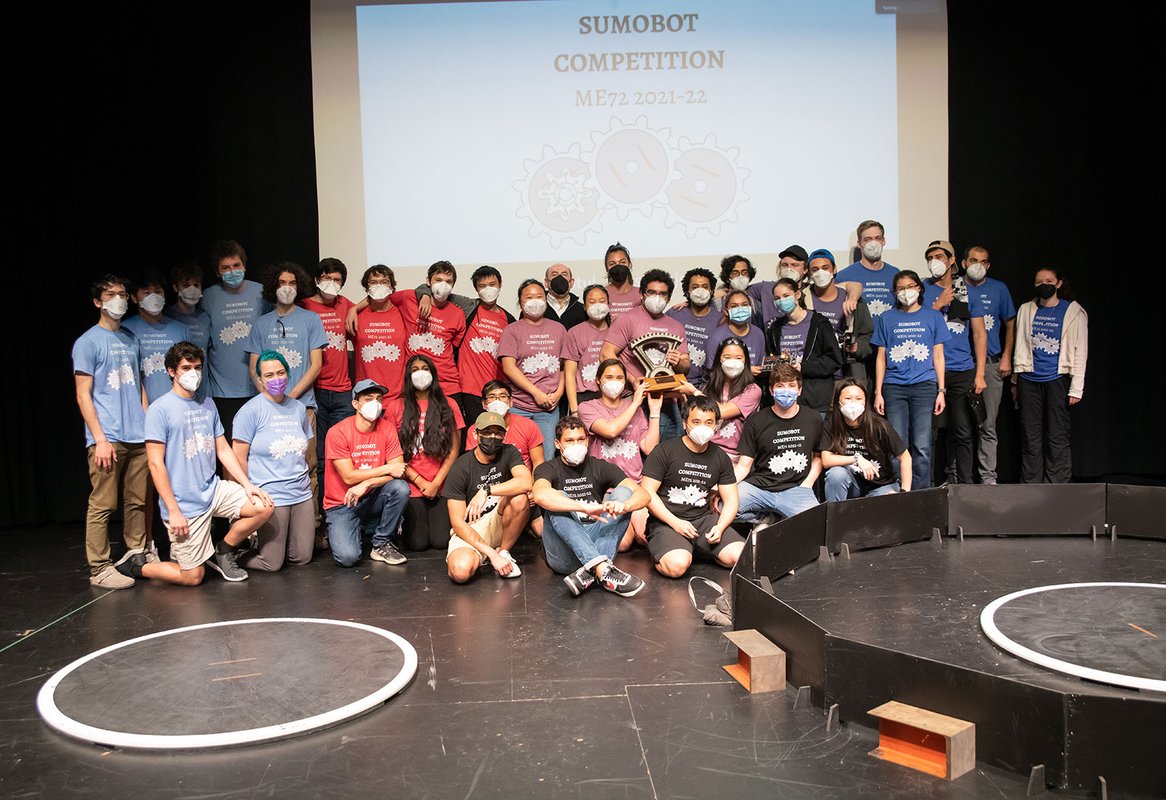 MAJOR SSAƧƧ put up a strong showing throughout, although PIZZA TIME—whose robot had been damaged in a previous bout—managed to knock MAJOR SSAƧƧ out of the ring and spark hopes of an underdog victory. However, MAJOR SSAƧƧ won the day with a decisive final victory. Behind the scenes, the student teams scrambled to continually repair their damaged robots after each bout to keep their fighters competitive.

Overall, Mello says he is proud of all of the robots his students built.

"I think we could enter some of these bots in an international competition and do pretty well," he says.