Since the early 1960s, Konishi was a leader in the field of avian neuroethology—the neurobiological study of natural behavior, such as prey capture by owls and singing in songbirds. In his laboratory at Caltech, Konishi advised dozens of graduate students and postdoctoral scholars. His team worked extensively on the auditory systems of barn owls, which use their acute hearing to home in on prey on the ground, even in total darkness. He first theorized and then showed experimentally that young birds initially remember a song learned from a "tutor" bird, usually a parent, and use the memory as a template to guide the development of their own song.

"The passing of my former PhD adviser Mark Konishi is a huge loss not only to the many friends, colleagues, and students of his, but to the entire research community and to Caltech," says Ralph Adolphs (PhD '93), Bren Professor of Psychology, Neuroscience, and Biology. "Mark's distinguished career was notable, among other things, for running essentially two labs at Caltech: one on understanding how the brains of songbirds learn and produce song, the second on understanding how the brains of owls allow them to hunt rustling rodents even in complete darkness."

"Mark's laboratory was characterized by an emphasis on complete freedom, and that spawned independence and creativity," Adolphs continues. "When I started as a graduate student, I was terrified, since I knew nothing. When I came back as faculty to Caltech in 2004, I felt I knew how to run things, and it was because of my experience with Mark's paramount emphasis on ideas and pursuit of the big open questions.

"For me, Mark Konishi's attitude toward science, and his influence on those he mentored, exemplifies exactly what Caltech is all about: tackling what you really want to find out, not what somebody tells you to find out," Adolphs adds. "Of course, the constraints in doing science are different nowadays than they were in the 1980s. But I hope that Mark's spirit will help us to keep these ideals in mind. The very first 10 minutes of my first conversation with Mark—at the time merely interviewing to be his graduate student—were telling. I asked him a lot of questions, to most of which he replied, 'I don't know.' After 10 minutes, he reflected and said: 'I can promise you just one thing. That you will have fun doing science.' That I did, and I will be forever grateful to Mark for it."

Konishi was born in Kyoto, Japan, on February 17, 1933, the only child of two silk weavers. Konishi's future scientific interests in animal behavior were foreshadowed by his childhood hobbies. "As the only child, my best playmates were animals including insects, fish, rabbits, and dogs," he wrote in a 2008 autobiography for the Society for Neuroscience.

During high school, Konishi joined his school's mountaineering club and led the school's biology club. According to Konishi's autobiography, these club activities helped him "come out of [his] only-child cocoon." Influenced by his high school biology teacher, he applied and was accepted to Hokkaido University in Sapporo, Japan. There, he discovered an interest in neurophysiology, and he conducted research studies on the behavior of snails, marine invertebrates, and birds.

After receiving his Bachelor's and Master's of Science degrees at Hokkaido, Konishi attended UC Berkeley for his PhD. It was on the ship crossing to the United States that Konishi chose to begin using the name "Mark," because of the letters it shared with his given name, Masakazu. At Berkeley, working with Professor Peter Marler, Konishi focused his doctoral research on the idea of central coordination: how complex behaviors, like a bird's singing, can be coordinated by a central neural system.

As he wrote in his autobiography:

Konishi spent several years in Germany as a postdoctoral researcher before beginning an assistant professorship at Princeton, where he began to study owls. When he moved to Caltech in 1975, Konishi brought 21 owls with him.

While at Caltech, Konishi and his collaborators made significant discoveries about the neural bases of behavior in owls and songbirds.

"Mark and his protégés demonstrated that the brains of barn owls possess a three-dimensional map of space constructed from auditory information, thus showing that owls can 'see' the world with their ears," Dickinson says. "This research helped establish how all brains, including ours, use sensory information to construct elaborate maps of the environment. Other work in Mark's lab helped determine how young male songbirds learn and practice the songs of their fathers so they can reproduce those precise melodies later in life to attract females. This research helped establish songbirds as important models for understanding motor learning and language acquisition."

Dickinson adds, "Mark Konishi was instrumental in establishing Caltech as an early powerhouse in neuroscience through the uncompromising quality of his research and his ability to recruit some of the brightest minds to his laboratory. Caltech is extremely fortunate to include Mark as part of its intellectual history. Like all great scientists, his legacy will impact generations of students."

Shinsuke Shimojo, Caltech's Gertrude Baltimore Professor of Experimental Psychology, says Konishi meant a great deal to many scientists, including himself, who Konishi helped bring to Caltech.

"How lucky I was! I learned from him that human sensory systems have to be understood in a broader comparative, biological context. But more critically, I learned from him how a scientist's life can be happy and creative at the same time. He was a great mentor and a superb adviser to colleagues. His ability to view the long run certainly guided Caltech biology and neuroscience significantly. He was always gentle, creative, and calmly humorous. His spirit will not only be remembered but will continue to guide us in this challenging period," Shimojo says.

Konishi was the Bing Professor of Behavioral Biology until his retirement in 2013. From 1977 to 1980, Konishi served as the executive officer for biology in the Division of Biology and Biological Engineering (then the Division of Biology). He was a recipient of numerous awards, notably: the F. O. Schmitt Prize (1987), the International Prize for Biology (1990), the Lewis S. Rosenstiel Award from Brandeis University (2004), the Edward M. Scolnick Prize in Neuroscience from MIT (2004), the Gerard Prize from the Society for Neuroscience (2004), the Karl Spencer Lashley Award from the American Philosophical Society (2004), and the Peter and Patricia Gruber Prize in Neuroscience from the Society for Neuroscience (2005). He was a member of the American Academy of Arts and Sciences, the National Academy of Sciences, and the International Society of Neuroethology, for which he served as president from 1986–89.

"Mark was a champion of behavioral neuroscience, a leading figure, and someone who embodied Caltech's unique way of doing science," says Gilles Laurent, a former Caltech faculty member now at the Max Planck Institute for Brain Research. "His support of idiosyncratic approaches to neuroscience, his mentoring of so many now-leading neuroscientists, and his founding of experimental research areas and contributions to them are all lasting monuments of experimental neuroscience. On top of this, Mark was a shining example of humility, kindness, humanity, and verbal sobriety, with touches of subtle yet very sharp humor."

Konishi's autobiography, written for the Society for Neuroscience's The History of Neuroscience, Volume 6, can be found here: https://www.sfn.org/about/history-of-neuroscience/autobiographical-chapters

An abbreviated version of this obituary was originally published on July 24, 2020. 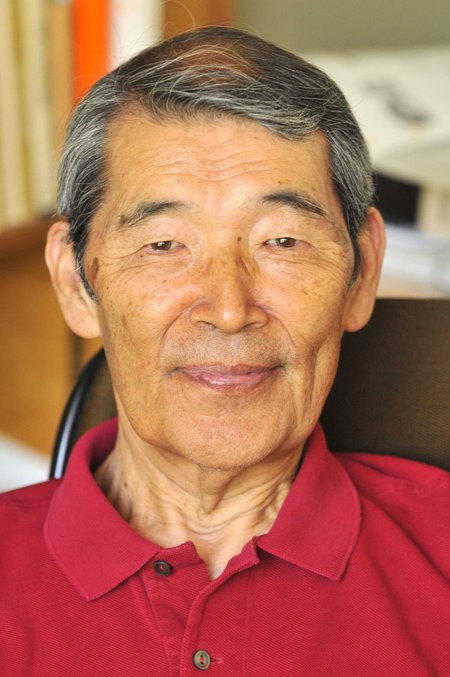 "My mother used to say that I should not do anything for her after her death, because she could not see it. True, I shall not be able to see what will be written about me. So, here is my version that I can see." —From the opening of Mark Konishi's autobiography Credit: Caltech
Image Lightbox
Subscribe
The Caltech Weekly