Maple Seeds and Animals Exploit the Same Trick to Fly

PASADENA, Calif.—The twirling seeds of maple trees spin like miniature helicopters as they fall to the ground. Because the seeds descend slowly as they swirl, they can be carried aloft by the wind and dispersed over great distances. Just how the seeds manage to fall so slowly, however, has mystified scientists.

In research published in the June 12 issue of the journal Science, researchers from Wageningen University in the Netherlands and the California Institute of Technology (Caltech) describe the aerodynamic secret of the enchanting swirling seeds.

The research, led by David Lentink, an assistant professor at Wageningen, and Michael H. Dickinson, the Zarem Professor of Bioengineering at Caltech, revealed that, by swirling, maple seeds generate a tornado-like vortex that sits atop the front leading edge of the seeds as they spin slowly to the ground. This leading-edge vortex lowers the air pressure over the upper surface of the maple seed, effectively sucking the wing upward to oppose gravity, giving it a boost. The vortex doubles the lift generated by the seeds compared to nonswirling seeds.

This use of a leading-edge vortex to increase lift is remarkably similar to the trick employed by insects, bats, and hummingbirds when they sweep their wings back and forth to hover. The finding means that plants and animals have converged evolutionarily on an identical aerodynamic solution for improving their flight performance.

To measure the flow of air created by swirling seeds, the scientists built plastic models of the seeds with radii of about five inches, or 5 to 10 times larger than a maple seed. The seeds were spun through a large tank of mineral oil using a specially designed robot, modified from a device at Caltech called "Robofly." Previously, Robofly helped to determine the aerodynamic forces that keep insects aloft.

The size of the model seed, the speed at which it spun through the tank, and the viscosity of the oil were chosen so that the characteristics of the fluid flow generated by the model were identical to those produced by real maple seeds—just flowing through oil instead of air.

Next, the scientists used a powerful laser to create a sheet of light that illuminated tiny glass beads added to the oil. They then used a camera to capture images of the motion of the beads as the model seed spun through the tank. The images revealed the presence of a tornado-like vortex lying near the front leading edge of the spinning seed. Force measurements attached to the model showed that the swirling vortex created extra lift that would act to slow the descent of a seed as it spun to the ground.

To verify the results from the robot seed models, the team built a wind tunnel at the Wageningen University to examine the flow created by real maple seeds as they spin freely. Smoke was used to visualize the flow of air around the spinning seeds. These studies of 32 specimens confirmed that real seeds do indeed produce a vortex that generates exceptionally high lift, and that the vortex is aerodynamically similar in structure to the vortex made by the flapping wings of insects, bats, and hummingbirds when they hover.

The research might have implications for the design of swirling parachutes—which have been designed by space agencies to slow the descent of future planetary probes exploring the atmospheres of planets such as Mars—and of micro-helicopters.

"Maple seeds could represent the most basic and simple design for a miniature helicopter, if the swirling wing could be powered by a micromotor," says Lentink. Single-rotor helicopters have been built and flown successfully with wing spans of roughly a meter, but never at the scale of a maple seed.

"There is enormous interest in the development of micro air vehicles, which, because of their size, must function using the same physical principles employed by small, natural flying devices such as insects and maple seeds," says Dickinson. For example, Lockheed Martin attempted to develop inexpensive "maple seed drone cameras" that could be deployed in large numbers for surveillance, "although the project is no longer funded," Lentink says.

"This is still an open challenge for future aerospace engineers, and our aerodynamic study of maple seeds could help design the first successful powered 'maple' helicopters," he adds. Over the past four years, Lentink, an aerospace engineer, has designed operational flying, flapping, and morphing micro air vehicles, inspired by his insect and bird flight research.

The other coauthors of the paper, "Leading-Edge Vortices Elevate Lift of Autorotating Plant Seeds," are W. B. Dickson of Caltech and J. L. van Leeuwen of Wageningen University. The research at Caltech was supported by the Netherlands Organization for Scientific Research and the National Science Foundation.

Go to /assets/619-mapleseed.mp4 for a video showing the vortex on top of a flying maple seed. 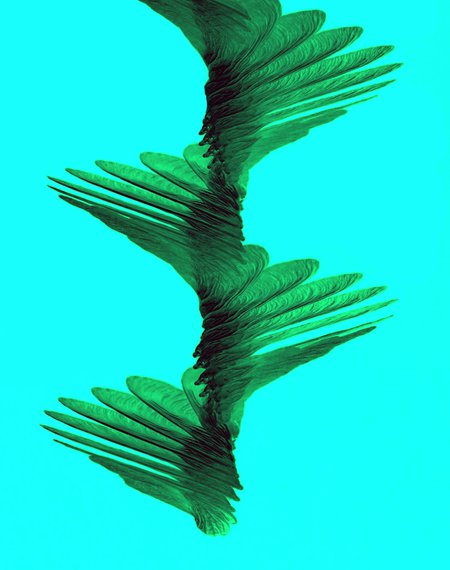 The flight path of a maple seed visualized in a composite multi-flash photograph. Autorotating seeds slow their descent by exploiting the low pressure generated by a vortex that forms at the leading edge of their spinning wing. A similar leading edge vortex also elevates the lift of insect, bat, and hummingbird wings, suggesting it represents a convergent aerodynamic solution in the evolution of flight performance. Credit: Courtesy of David Lentink
Image Lightbox 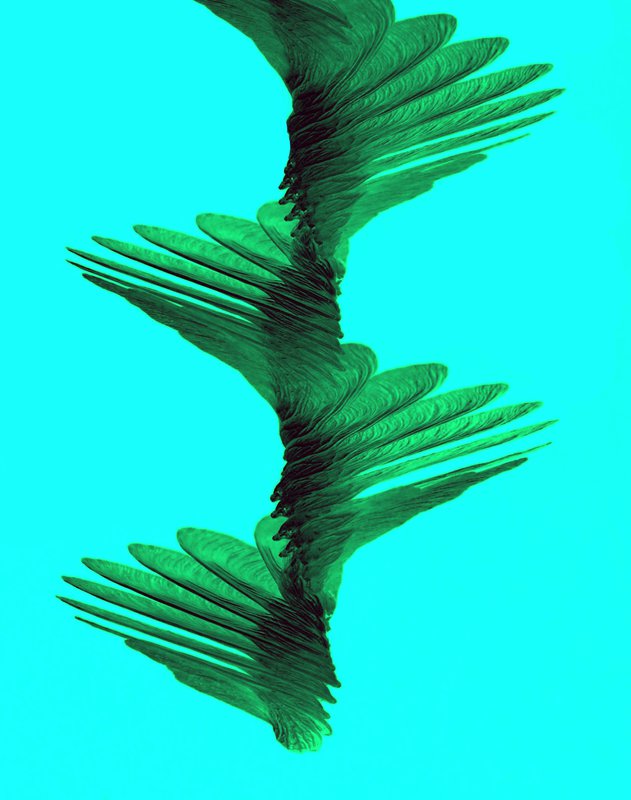 The flight path of a maple seed visualized in a composite multi-flash photograph. Autorotating seeds slow their descent by exploiting the low pressure generated by a vortex that forms at the leading edge of their spinning wing. A similar leading edge vortex also elevates the lift of insect, bat, and hummingbird wings, suggesting it represents a convergent aerodynamic solution in the evolution of flight performance.
Credit: Courtesy of David Lentink
Download Full Image
Subscribe
The Caltech Weekly