Like all metals, silver, copper, and gold are conductors. Electrons flow across them, carrying heat and electricity. While gold is a good conductor under any conditions, some materials have the property of behaving like metal conductors only if temperatures are high enough; at low temperatures, they act like insulators and do not do a good job of carrying electricity. In other words, these unusual materials go from acting like a chunk of gold to acting like a piece of wood as temperatures are lowered. Physicists have developed theories to explain this so-called metal–insulator transition, but the mechanisms behind the transitions are not always clear.

"In some cases, it is not easy to predict whether a material is a metal or an insulator," explains Caltech visiting associate Yejun Feng of the Okinawa Institute for Science and Technology Graduate University. "Metals are always good conductors no matter what, but some other so-called apparent metals are insulators for reasons that are not well understood." Feng has puzzled over this question for at least five years; others on his team, such as collaborator David Mandrus at the University of Tennessee, have thought about the problem for more than two decades.

Now, a new study from Feng and colleagues, published in Nature Communications, offers the cleanest experimental proof yet of a metal–insulator transition theory proposed 70 years ago by physicist John Slater. According to that theory, magnetism, which results when the so-called "spins" of electrons in a material are organized in an orderly fashion, can solely drive the metal–insulator transition; in other previous experiments, changes in the lattice structure of a material or electron interactions based on their charges have been deemed responsible.

"This is a problem that goes back to a theory introduced in 1951, but until now it has been very hard to find an experimental system that actually demonstrates the spin–spin interactions as the driving force because of confounding factors," explains co-author Thomas Rosenbaum, a professor of physics at Caltech who is also the Institute's president and the Sonja and William Davidow Presidential Chair.

"Slater proposed that, as the temperature is lowered, an ordered magnetic state would prevent electrons from flowing through the material," Rosenbaum explains. "Although his idea is theoretically sound, it turns out that for the vast majority of materials, the way that electrons interact with each other electronically has a much stronger effect than the magnetic interactions, which made the task of proving the Slater mechanism challenging."

The research will help answer fundamental questions about how different materials behave, and may also have applications in technology, for example in the field of spintronics, in which the spins of electrons would form the basis of electrical devices instead of the electron charges as is routine now. "Fundamental questions about metal and insulators will be relevant in the upcoming technological revolution," says Feng.

Typically, when something is a good conductor, such as a metal, the electrons can zip around largely unimpeded. Conversely, with insulators, the electrons get stuck and cannot travel freely. The situation is comparable to communities of people, explains Feng. If you think of materials as communities and electrons as members of the households, then "insulators are communities with people who don't want their neighbors to visit because it makes them feel uncomfortable." Conductive metals, however, represent "close-knit communities, like in a college dorm, where neighbors visit each other freely and frequently," he says.

Likewise, Feng uses this metaphor to explain what happens when some metals become insulators as temperatures drop. "It's like winter time, in that people—or the electrons—stay home and don't go out and interact."

In the 1940s, physicist Sir Nevill Francis Mott figured out how some metals can become insulators. His theory, which garnered the 1977 Nobel Prize in Physics, described how "certain metals can become insulators when the electronic density decreases by separating the atoms from each other in some convenient way," according to the Nobel Prize press release. In this case, the repulsion between the electrons is behind the transition.

In 1951, Slater proposed an alternate mechanism based on spin–spin interactions, but this idea has been hard to prove experimentally because the other processes of the metal–insulator transition, including those proposed by Mott, can swamp the Slater mechanism, making it hard to isolate.

In the new study, the researchers were able at last to experimentally demonstrate the Slater mechanism using a compound that has been studied since 1974, called pyrochlore oxide or Cd2Os2O7. This compound is not affected by other metal–insulator transition mechanisms. However, within this material, the Slater mechanism is overshadowed by an unforeseen experimental challenge, namely the presence of "domain walls" that divide the material into sections.

"The domain walls are like the highways or bigger roads between communities," says Feng. In pyrochlore oxide, the domain walls are conductive, even though the bulk of the material is insulating. Although the domain walls started out as an experimental challenge, they turned out to be essential to the team's development of a new measurement procedure and technique to prove the Slater mechanism.

"Previous efforts to prove the Slater metal–insulator transition theory did not account for the fact that the domain walls were masking the magnetism-driven effects," says Yishu Wang (PhD '18), a co-author at the Johns Hopkins University who has continuously worked on this study since her graduate work at Caltech. "By isolating the domain walls from the bulk of the insulating materials, we were able to develop a more complete understanding of the Slater mechanism." Wang had previously worked with Patrick Lee, a visiting professor at Caltech from MIT, to lay the basic understanding of conductive domain walls using symmetry arguments, which describe how and if electrons in materials respond to changes in the direction of a magnetic field.

"By challenging the conventional assumptions about how electrical conductivity measurements are made in magnetic materials through fundamental symmetry arguments, we have developed new tools to probe spintronic devices, many of which depend on transport across domain walls," says Rosenbaum.

"We developed a methodology to set apart the domain-wall influence, and only then could the Slater mechanism be revealed," says Feng. "It's a bit like discovering a diamond in the rough."

The paper, titled, "A continuous metal-insulator transition driven by spin correlations," was funded by the Okinawa Institute, with subsidy funding from the Cabinet Office, Government of Japan; the National Science Foundation; the Air Force Office of Scientific Research; and the U.S. Department of Energy. Other authors include Daniel M. Silevitch of Caltech and Scott E. Cooper of the Okinawa Institute of Science and Technology. Mandrus is also affiliated with the Oak Ridge National Laboratory. 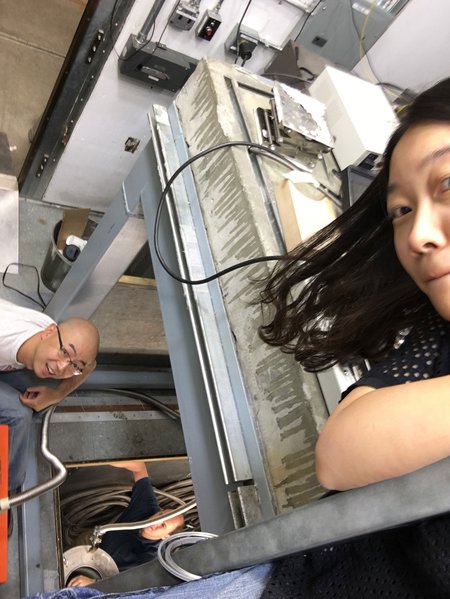 Yejun Feng (left), Yishu Wang (right), and Daniel Silevitch (bottom), are pictured here setting up an experiment in the Rosenbaum lab at Caltech. 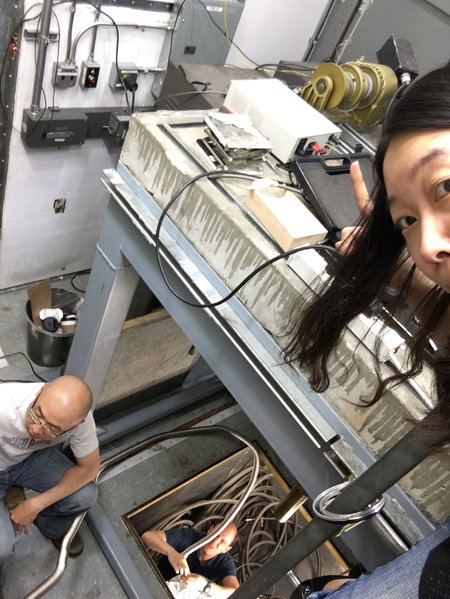 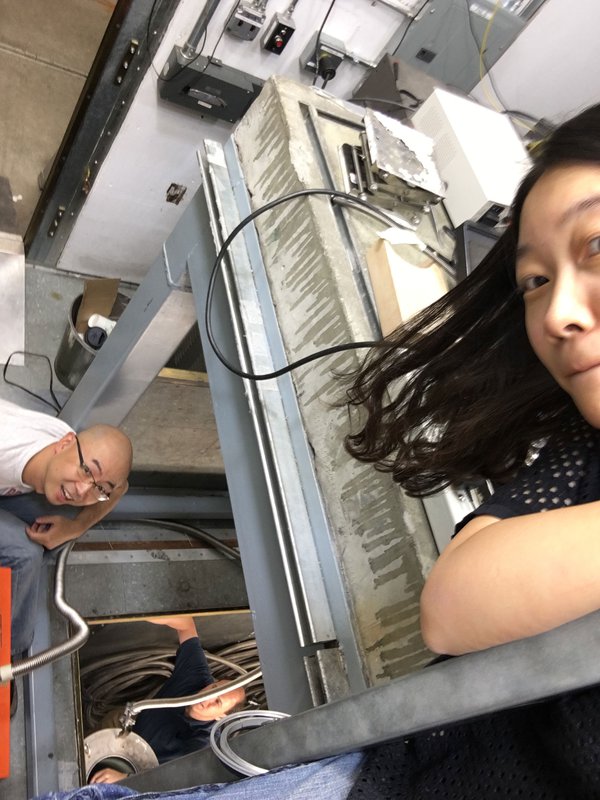 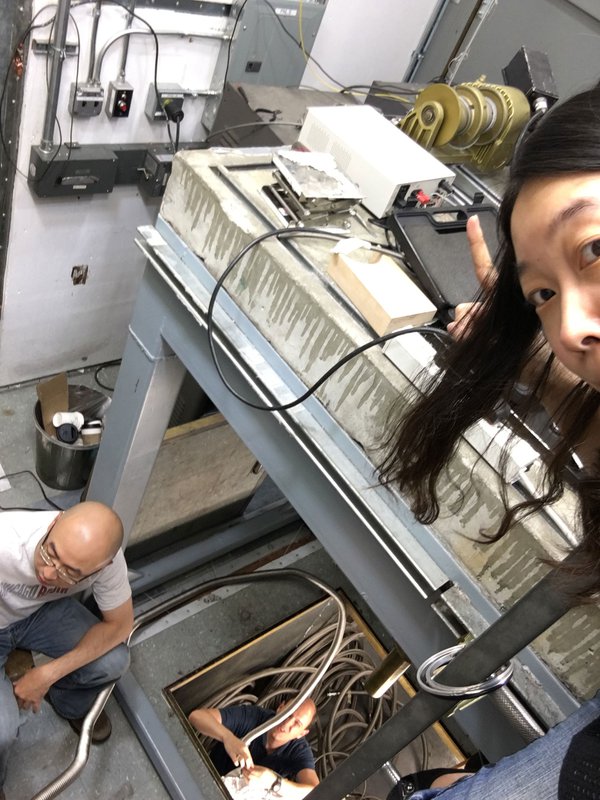 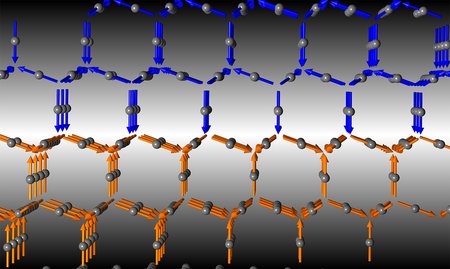 An illustration of two domains (blue and orange) divided by a domain wall (white area) in a material. The magnetic order is designated with organized arrows (electron spins) while the colors represent two different domains (but the same magnetic order). In the material pictured here, the domain walls are conductive and the domains are insulating. Credit: Yejun Feng
Image Lightbox 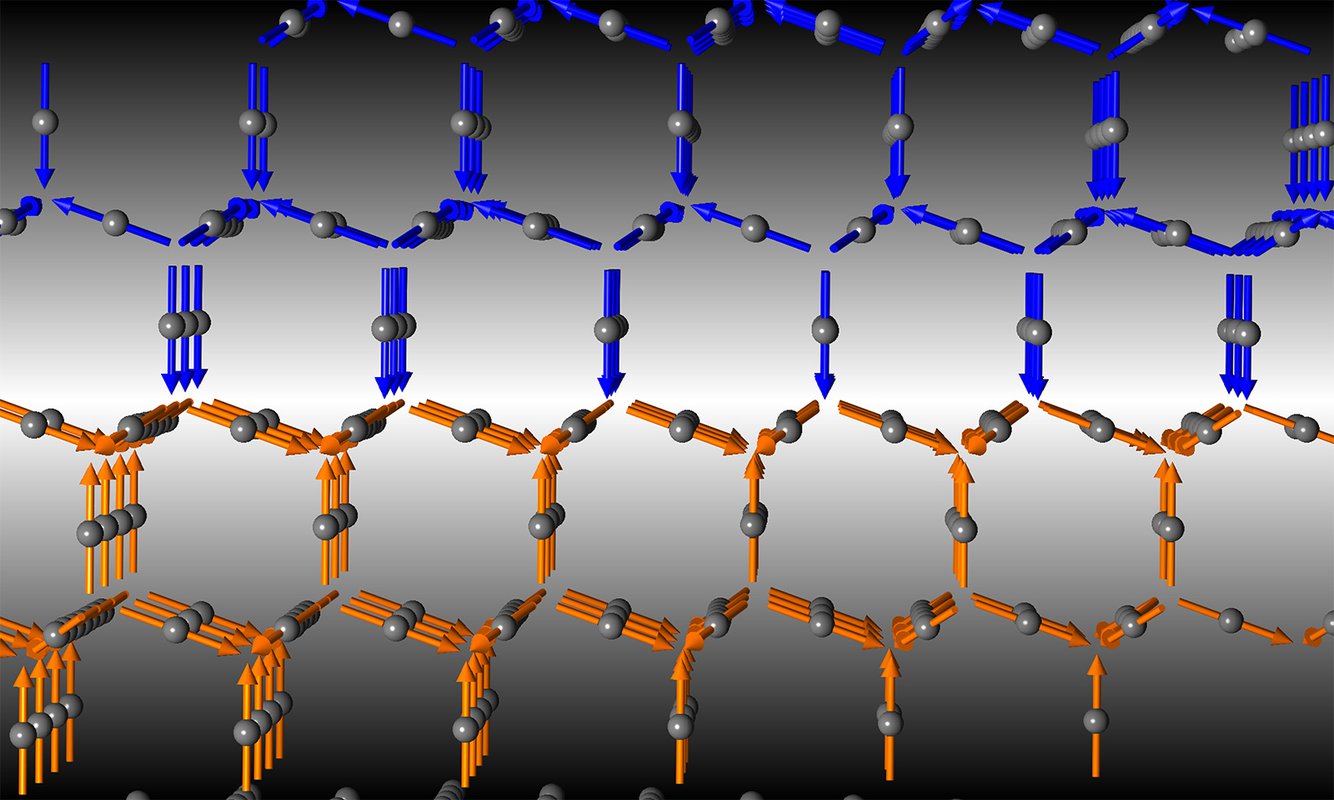 An illustration of two domains (blue and orange) divided by a domain wall (white area) in a material. The magnetic order is designated with organized arrows (electron spins) while the colors represent two different domains (but the same magnetic order). In the material pictured here, the domain walls are conductive and the domains are insulating.
Credit: Yejun Feng
Download Full Image
Subscribe
The Caltech Weekly