The lightweight skeletons of organisms such as sea sponges display a strength that far exceeds that of manmade products constructed from similar materials. Scientists have long suspected that the difference has to do with the hierarchical architecture of the biological materials—the way the silica-based skeletons are built up from different structural elements, some of which are measured on the scale of billionths of meters, or nanometers. Now engineers at the California Institute of Technology (Caltech) have mimicked such a structure by creating nanostructured, hollow ceramic scaffolds, and have found that the small building blocks, or unit cells, do indeed display remarkable strength and resistance to failure despite being more than 85 percent air.

"Inspired, in part, by hard biological materials and by earlier work by Toby Schaedler and a team from HRL Laboratories, Caltech, and UC Irvine on the fabrication of extremely lightweight microtrusses, we designed architectures with building blocks that are less than five microns long, meaning that they are not resolvable by the human eye," says Julia R. Greer, professor of materials science and mechanics at Caltech. "Constructing these architectures out of materials with nanometer dimensions has enabled us to decouple the materials' strength from their density and to fabricate so-called structural metamaterials which are very stiff yet extremely lightweight."

At the nanometer scale, solids have been shown to exhibit mechanical properties that differ substantially from those displayed by the same materials at larger scales. For example, Greer's group has shown previously that at the nanoscale, some metals are about 50 times stronger than usual, and some amorphous materials become ductile rather than brittle. "We are capitalizing on these size effects and using them to make real, three-dimensional structures," Greer says.

In an advance online publication of the journal Nature Materials, Greer and her students describe how the new structures were made and responded to applied forces.

The largest structure the team has fabricated thus far using the new method is a one-millimeter cube. Compression tests on the the entire structure indicate that not only the individual unit cells but also the complete architecture can be endowed with unusually high strength, depending on the material, which suggests that the general fabrication technique the researchers developed could be used to produce lightweight, mechanically robust small-scale components such as batteries, interfaces, catalysts, and implantable biomedical devices.

Greer says the work could fundamentally shift the way people think about the creation of materials. "With this approach, we can really start thinking about designing materials backward," she says. "I can start with a property and say that I want something that has this strength or this thermal conductivity, for example. Then I can design the optimal architecture with the optimal material at the relevant size and end up with the material I wanted."

The team first digitally designed a lattice structure featuring repeating octahedral unit cells—a design that mimics the type of periodic lattice structure seen in diatoms. Next, the researchers used a technique called two-photon lithography to turn that design into a three-dimensional polymer lattice. Then they uniformly coated that polymer lattice with thin layers of the ceramic material titanium nitride (TiN) and removed the polymer core, leaving a ceramic nanolattice. The lattice is constructed of hollow struts with walls no thicker than 75 nanometers.

"We are now able to design exactly the structure that we want to replicate and then process it in such a way that it's made out of almost any material class we'd like—for example, metals, ceramics, or semiconductors—at the right dimensions," Greer says.

In a second paper, scheduled for publication in the journal Advanced Engineering Materials, Greer's group demonstrates that similar nanostructured lattices could be made from gold rather than a ceramic. "Basically, once you've created the scaffold, you can use whatever technique will allow you to deposit a uniform layer of material on top of it," Greer says.

In the Nature Materials work, the team tested the individual octahedral cells of the final ceramic lattice and found that they had an unusually high tensile strength. Despite being repeatedly subjected to stress, the lattice cells did not break, whereas a much larger, solid piece of TiN would break at much lower stresses. Typical ceramics fail because of flaws—the imperfections, such as holes and voids, that they contain. "We believe the greater strength of these nanostructured materials comes from the fact that when samples become sufficiently small, their potential flaws also become very small, and the probability of finding a weak flaw within them becomes very low," Greer says. So although structural mechanics would predict that a cellular structure made of TiN would be weak because it has very thin walls, she says, "we can effectively trick this law by reducing the thickness or the size of the material and by tuning its microstructure, or atomic configurations."

Additional coauthors on the Nature Materials paper, "Fabrication and Deformation of Three-Dimensional Hollow Ceramic Nanostructures," are Dongchan Jang, who recently completed a postdoctoral fellowship in Greer's lab, Caltech graduate student Lucas Meza, and Frank Greer, formerly of the Jet Propulsion Laboratory (JPL). The work was supported by funding from the Dow-Resnick Innovation Fund at Caltech, DARPA's Materials with Controlled Microstructural Architecture program, and the Army Research Office through the Institute for Collaborative Biotechnologies at Caltech. Some of the work was carried out at JPL under a contract with NASA, and the Kavli Nanoscience Institute at Caltech provided support and infrastructure.

The lead author on the Advanced Engineering Materials paper, "Design and Fabrication of Hollow Rigid Nanolattices Via Two-Photon Lithography," is Caltech graduate student Lauren Montemayor. Meza is a coauthor. In addition to support from the Dow-Resnick Innovation Fund, this work received funding from an NSF Graduate Research Fellowship. 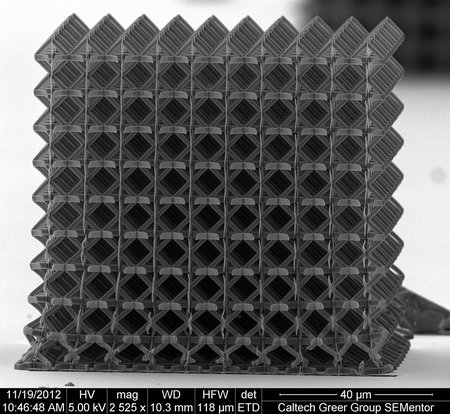 Three-dimensional, hollow titanium nitride nanotruss with tessellated octahedral geometry. Each unit cell is on the order of 10 microns, each strut length within the unit cell is about three to five microns, the diameter of each strut is less than one micron, and the thickness of titanium nitride is roughly 75 nanometers. Credit: Dongchan Jang and Lucas Meza
Image Lightbox 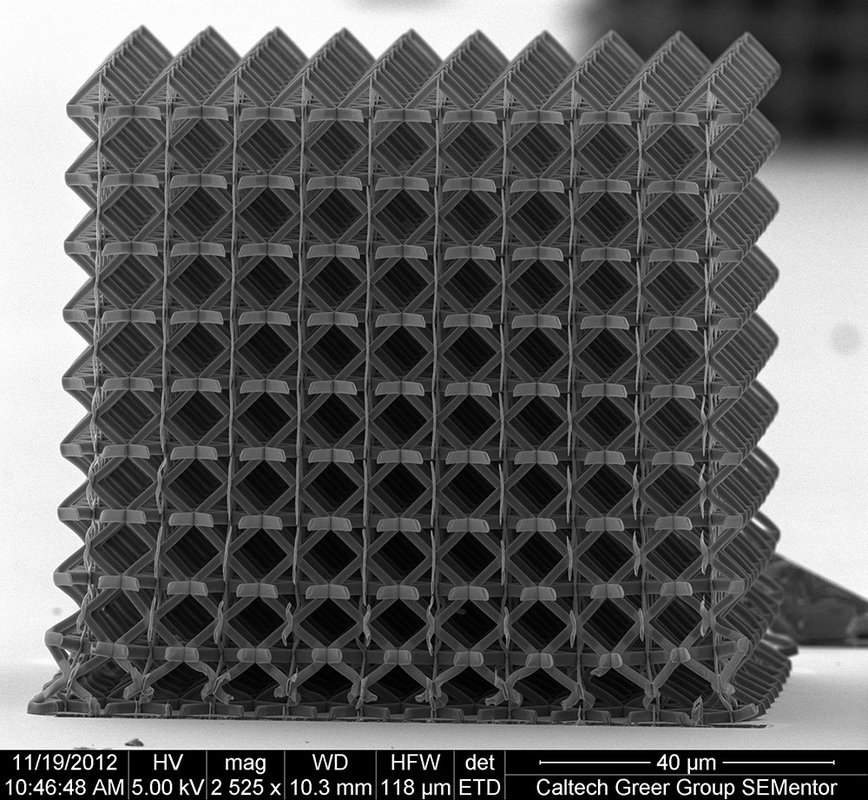 Three-dimensional, hollow titanium nitride nanotruss with tessellated octahedral geometry. Each unit cell is on the order of 10 microns, each strut length within the unit cell is about three to five microns, the diameter of each strut is less than one micron, and the thickness of titanium nitride is roughly 75 nanometers.
Credit: Dongchan Jang and Lucas Meza
Download Full Image
Subscribe
The Caltech Weekly