Looking at the Man in the Moon

PASADENA, Calif.—Many of us see a man in the moon—a human face smiling down at us from the lunar surface. The "face," of course, is just an illusion, shaped by the dark splotches of lunar maria (smooth plains formed from the lava of ancient volcanic eruptions).

Like a loyal friend, the man is always there, constantly gazing at us as the moon revolves around Earth, locked in what's called a synchronous orbit, in which the moon rotates exactly once every time it orbits Earth. But why did the moon settle into an orbit with the man—rather than the moon's crater-covered far side—facing Earth?

Previously, some scientists have thought the fact that we see the man is just the result of a coincidence, a sort of lunar coin toss, says Oded Aharonson, professor of planetary science at the California Institute of Technology (Caltech). But he and his colleagues have now found that is not the case. In the past, the moon spun around its axis faster than it does today, and their new analysis shows that the fact that the man now faces us may be a result of the rate at which the moon slowed down before becoming locked into its current orientation.

Aharonson, along with Peter Goldreich, the Lee DuBridge Professor of Astrophysics and Planetary Physics, Emeritus, and Re'em Sari of the Hebrew University of Jerusalem, describe their findings in a paper published online on February 27 in the journal Icarus.

Although the moon looks spherical, it is actually elongated, almost like a football. Not long after the moon formed just over four billion years ago, while it was still hot and largely molten, Earth's gravity began to stretch its new companion. When the moon cooled, its slightly oblong shape stuck. Today, the man in the moon occupies one of the two elongated ends.

Eventually, however, Earth's pull on the moon slowed down its rotation through a dissipative process first explained by Goldreich in the 1960s. Tidal forces tugged on the moon, creating another slight bulge—in addition to the moon's already-elongated shape—that moved to stay on whichever side was closest to Earth at that moment. The bulge continued to point toward Earth as the moon rotated through it, causing the moon's interior to squish and flex as the bulge changed position. The internal friction from this flexing acted as a brake that slowed the moon's spinning until its rotation rate matched its revolution rate, when it settled into a synchronous orbit.

In this way, as a result of Earth's gravity, the moon became locked into an orientation with its long axis pointing toward our planet. The question, then, is why the side that ended up facing Earth is the one with the man—especially since the reverse configuration is actually favored, the researchers say. The side of the moon without the man has higher mountains and an elevated topography, they explain. Based on a naive analysis of the physics, it might be expected for this side to face Earth, because its surface—and its mass—would be closer to Earth.

In the work described in the Icarus paper, the researchers analyzed the physics of the moon and discovered that what determines which side of the moon we see is the rate at which the moon slowed down its spinning—how fast it dissipated its rotational energy. If the moon had lost energy at a significantly different rate—say 100 times faster—than it really did, there would have been a 50/50 chance that the man would face us. In that scenario, Aharonson says, having the man face us would indeed have been merely the result of a coin flip. But, as it turns out, the moon's actual rate of energy dissipation was much slower—and that means the man in the moon had about two-to-one odds of facing us. "The coin was loaded," Aharonson says.

By tweaking the dissipation rate in computer simulations, the researchers were able to simulate moons that resulted with either the man or the mountainous far side facing us every single time. In other words, they were able to load the coin however they wanted.

But there is a caveat, he adds. The researchers' analysis is based on the present-day moon. "In the past, when the moon first locked, it could've had different properties," Aharonson notes. If that's the case, then the explanation for why we see the man might result in different odds. But, if the moon locked into its synchronous orbit relatively recently—within the last billion years or so—then there's a good chance the researchers' analysis is fitting.

The title of the Icarus paper is "Why do we see the man in the moon?" Support was provided by NASA's Lunar Reconnaissance Orbiter project. 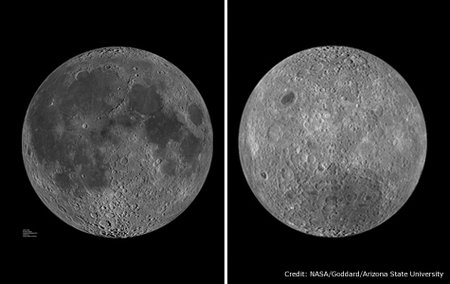 The moon's near side (left) is covered with dark splotches of lunar maria that look like a man's face when seen from Earth. The moon's far side (right), with its many craters and elevated topography, looks quite different.
Image Lightbox 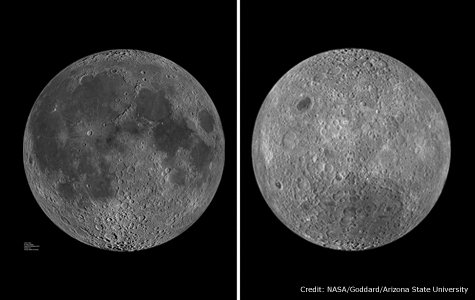 The moon's near side (left) is covered with dark splotches of lunar maria that look like a man's face when seen from Earth. The moon's far side (right), with its many craters and elevated topography, looks quite different.
Download Full Image
Subscribe
The Caltech Weekly