As the Advanced LIGO Project geared up last summer, 27 undergraduates from around the world became full partners in one of the biggest, most complex physics experiment ever. Their contributions ranged from creating hardware and software for current use to helping design next-generation detectors.

LIGO, the Laser Interferometer Gravitational-Wave Observatory, is designed to detect the ripples in the fabric of space and time produced by such violent events as supernova explosions or the mergers of pairs of black holes trapped in a death spiral. Such waves were proposed by Einstein as a consequence of general relativity. His theory turns 100 this November, and all of its other predictions have been confirmed; LIGO, a joint project of Caltech and MIT, entered the search with its first science run in 2002.

Gravitational waves are so subtle that the hunt requires ingenuity on a grand scale—each of LIGO's twin observatories, located in Hanford, Washington, and Livingston, Louisiana, consists of a four-kilometer-long, L-shaped interferometer containing hanging mirrors designed to bob on such a wave as it passes through. Lasers measure the mirrors' motions down to one-thousandth the diameter of a proton. Advanced LIGO, a package of upgrades that became operational on September 18, 2015, is increasing that sensitivity by a factor of 10.

Thanks to Caltech's Summer Undergraduate Research Fellowships (SURF) program, students have been part of LIGO since the 1990s—more than 350 of them. Some have gone on to careers in LIGO, and some are now mentoring students themselves. Anamaria Effler SURFed with LIGO in 2004 and 2005 before graduating from Caltech with a bachelor's degree in physics in 2006. But, she says, "I wasn't sure I wanted to go to grad school, so I worked as an operator at LIGO Hanford for three years." The experience moved her to enroll at Louisiana State, "the closest school to a LIGO site." Effler is now a Caltech postdoc at LIGO Livingston, and last summer she mentored an undergraduate from the University of Michigan–Ann Arbor in a project to track down noise sources generated within the interferometer itself.

Noise comes from everywhere, at all frequencies—from stray high-energy photons jostling the mirrors to low-pitched rumblings from within the earth itself. LIGO Hanford feels waves lapping at the beach, for example, even though the Pacific Ocean is more than 250 miles to the west. Elaborate electromechanical systems and sophisticated mathematical filters compensate for such things, but battling noise is like peeling an onion. Removing a layer reveals a fresh one.

Advanced LIGO will have to conquer "Newtonian noise," a slow vibration caused by fluctuations in the earth's density. Explains Professor of Physics Alan Weinstein, head of Caltech's astrophysical analysis group for LIGO, "When the ground shakes, it shakes the suspensions, which shake the mirrors. A perfect suspension keeps that shaking from reaching the mirrors, but that shaking also changes the local gravitational field. You can screen out mechanical motion, but you can't screen out gravity." He expects LIGO will encounter Newtonian noise at frequencies below 10 Hz, or cycles per second, where it will mask the gravitational waves radiated by doomed black-hole pairs up until their last few seconds of life. Weinstein's colleague, Professor of Physics Rana Adhikari, is trying to develop what are essentially high-performance noise-cancelling headphones—feed-forward systems that use inputs from seismometers and geophones to compute the noise's ever-shifting waveforms and manipulate the mirror suspensions to negate the noise's effects in real time. Student contributions included working on a prototype seismometer and testing noise-filtering software.

Other students used Einstein's equations to simulate the waves that such a merger would generate. Says postdoctoral researcher Tjonnie Li, who mentored four students, "General relativity allows us to predict the waves' shapes quite precisely." But many physicists believe that, just as general relativity goes beyond Newton's laws, so will another theory go beyond relativity. "LIGO will be a good test, because every detail of the signal we see should match the predictions," Li adds. "One of my students was modeling how long it should take a pair of black holes to merge under various scenarios. If they merge faster than expected, it would mean that some energy is escaping in some way that general relativity did not predict. This might not point you to the right explanation, but it does tell you that there's something missing." Furthermore, Li says, by comparing their simulations to LIGO's actual data, researchers "can infer something about how the fundamental forces interact with one another. They're all equally strong when matter gets that dense."

Just as Advanced LIGO marks the next generation of detectors, LIGO's undergraduates embody the next generation of researchers. In the 2014–15 academic year, two of LIGO's three incoming graduate students had SURFed here while earning their bachelor's degrees elsewhere. Says Li, "It takes a lot of effort from all of the mentors, and in particular Alan for organizing all of it, but the benefits are immediately visible. If their interest has been piqued, they often do their PhDs in this field. They either come here, or go on to other institutions that do LIGO." 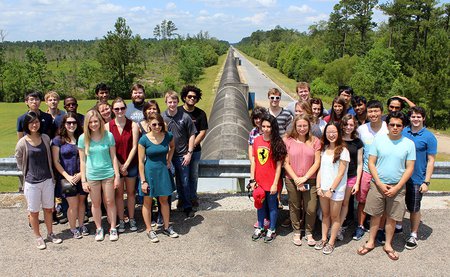 LIGO SURF students, class of 2015, on a bridge over the beam pipe at the LIGO facility in Livingston, Louisiana. Credit: LIGO/LLO/Caltech 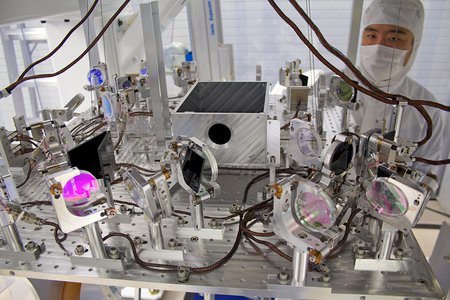 An engineer works on one of the suspension systems during the Advanced LIGO upgrade. Credit: LIGO/Caltech 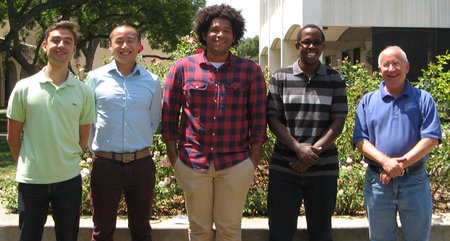 From left to right: Caltech graduate student Max Isi and postdoc Tjonnie Li, mentors; Carl Fields, an undergraduate from Arizona State; Albert Wandui, an undergraduate from Stanford; and Caltech physics professor Alan Weinstein. Fields and Wandui were 2015's Carl A. Rouse Fellows, sponsored jointly by the National Society of Black Physicists and the LIGO Laboratory. Rouse (MS '53, PhD '56) was the first African American to be granted a doctorate in physics from Caltech. Credit: LIGO/Caltech 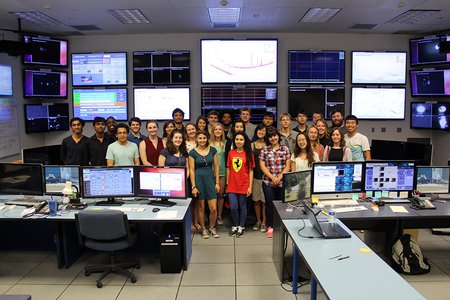 LIGO SURF students, class of 2015, in the control room n a bridge at the LIGO facility in Livingston, Louisiana. The large monitor over their heads displays the incoming data in real time. Credit: LIGO/LLO/Caltech
Image Gallery Lightbox 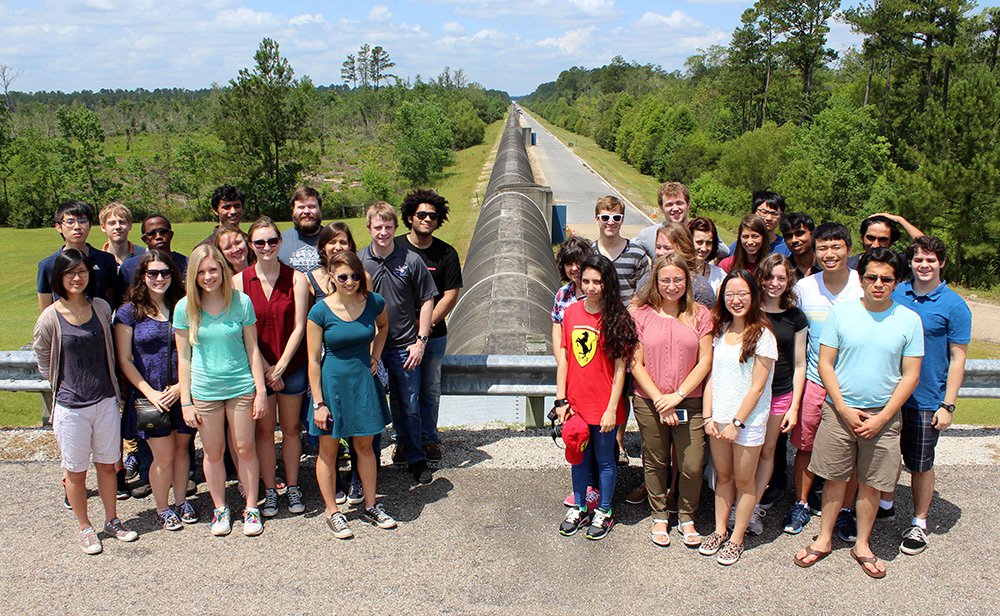 LIGO SURF students, class of 2015, on a bridge over the beam pipe at the LIGO facility in Livingston, Louisiana.
Credit: LIGO/LLO/Caltech
Download Full Image 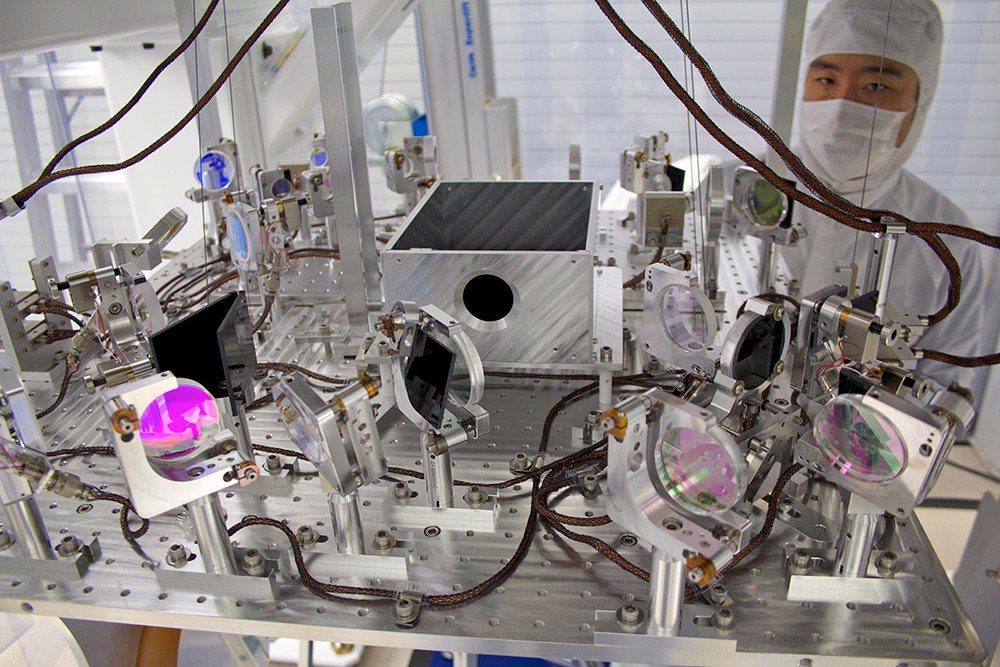 An engineer works on one of the suspension systems during the Advanced LIGO upgrade.
Credit: LIGO/Caltech
Download Full Image 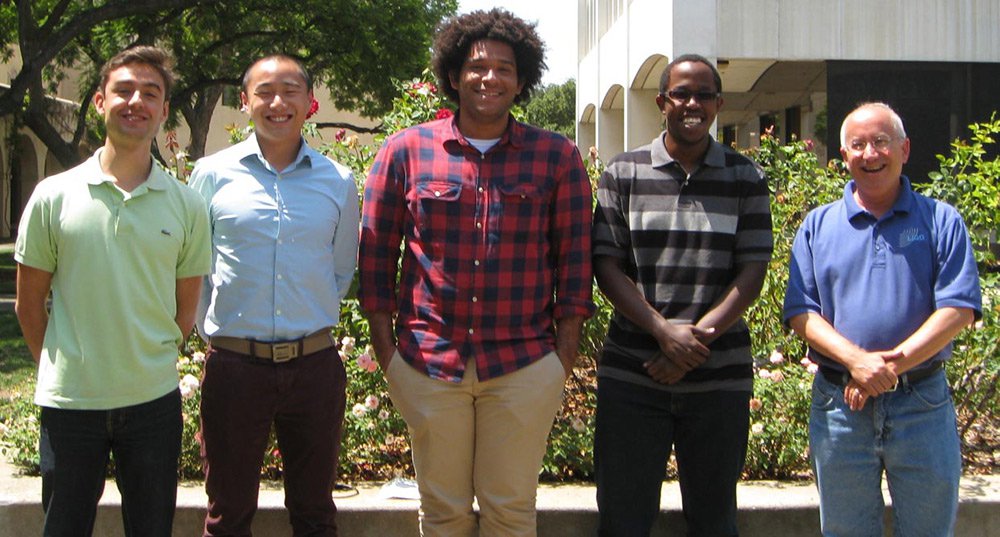 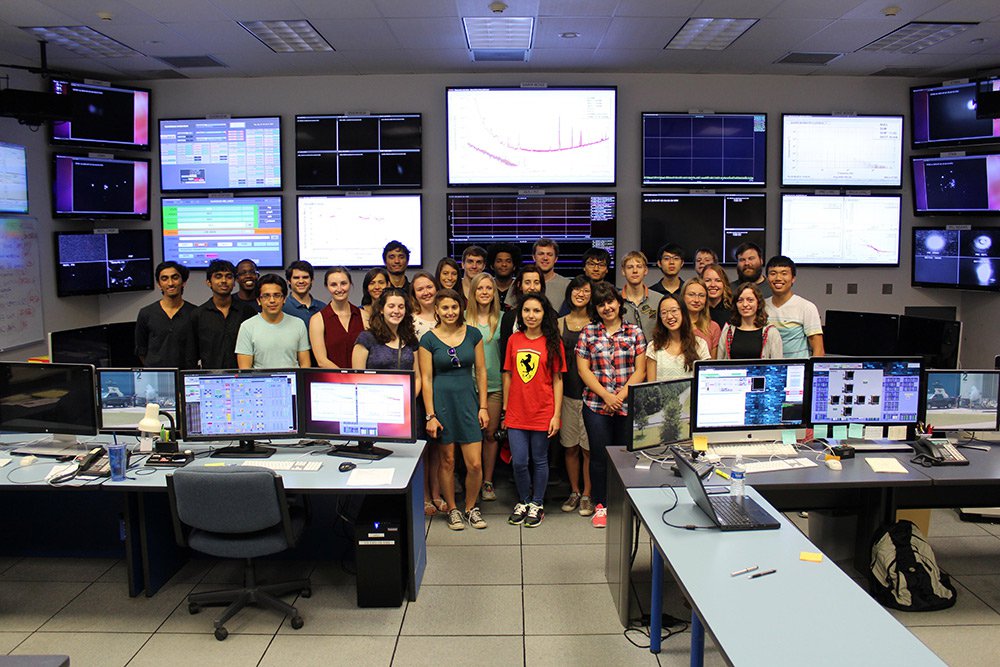 LIGO SURF students, class of 2015, in the control room n a bridge at the LIGO facility in Livingston, Louisiana. The large monitor over their heads displays the incoming data in real time.
Credit: LIGO/LLO/Caltech
Download Full Image