By simulating earthquakes in a lab, Caltech engineers have provided strong experimental support for a form of earthquake propagation now thought responsible for the magnitude-9.0 earthquake that devastated the coast of Japan in 2011.

Along some fault lines, which are the boundaries of tectonic plates, a fine-grained gravel is formed as the plates grind against one another. The influence of this gravel on earthquakes has long been the subject of scientific speculation. In a new paper appearing in the journal Nature on June 1, the Caltech researchers show that the fine gravel, known as rock gouge, first halts earthquake propagation, but then triggers the rebirth of earthquakes to generate powerful ruptures.

"Our novel experimental approach has enabled us to look into the earthquake process up close, and to uncover key features of rupture propagation and friction evolution in rock gouge," says Vito Rubino, research scientist and lead author of the Nature paper. "One of the main findings of our study is that fault sections previously thought to act as barriers against dynamic rupture may in fact host earthquakes, as a result of the activation of co-seismic friction weakening mechanisms." 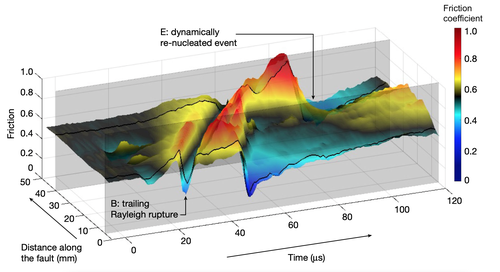 A three-dimensional visualization shows how rock gouge can arrest a rupture (in red) but, with a combination of dynamic stressing and dynamic weakening, will ultimately re-nucleate the rupture shortly thereafter (in blue). Credit: Rubino et. al., Nature, 2022
Image Lightbox 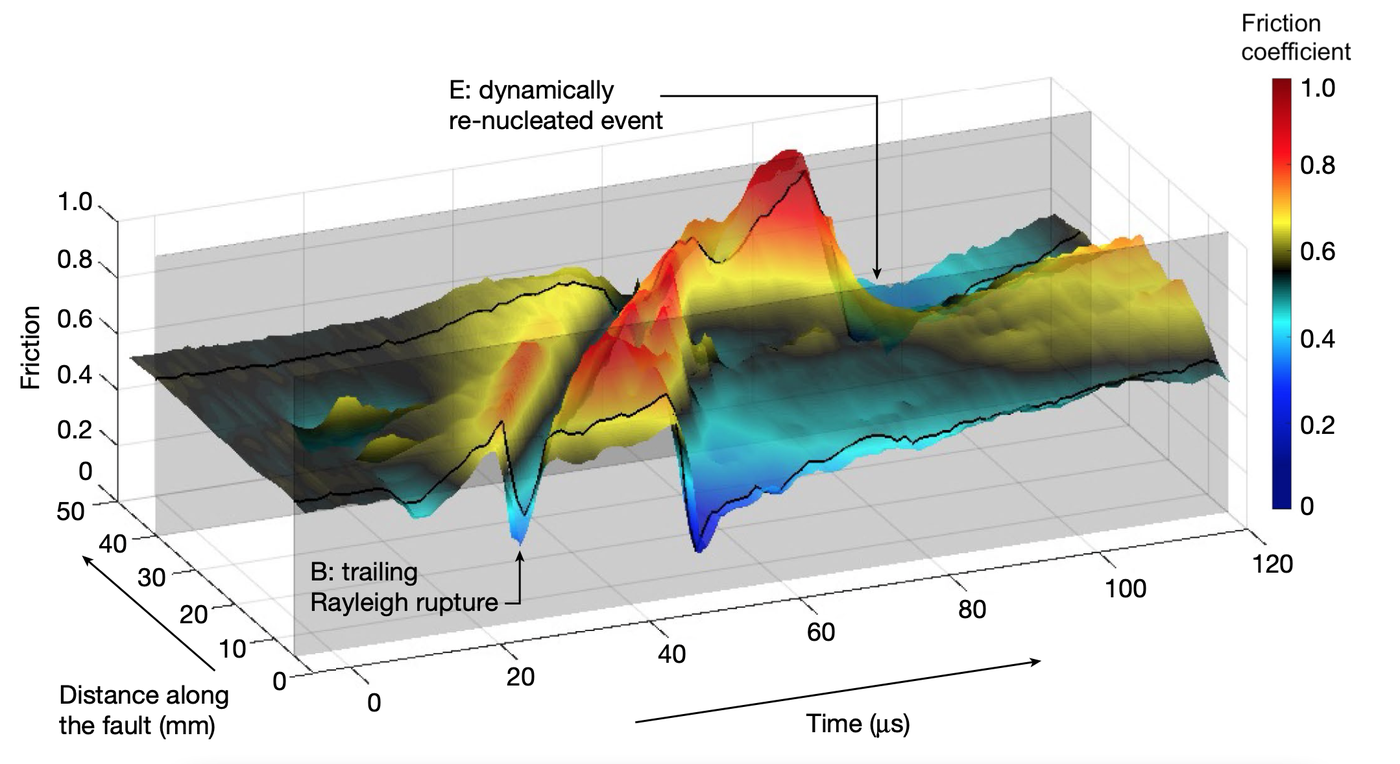 A three-dimensional visualization shows how rock gouge can arrest a rupture (in red) but, with a combination of dynamic stressing and dynamic weakening, will ultimately re-nucleate the rupture shortly thereafter (in blue).
Credit: Rubino et. al., Nature, 2022
Download Full Image

In the paper, Rubino and his co-authors Nadia Lapusta, the Lawrence A. Hanson, Jr., Professor of Mechanical Engineering and Geophysics, and Ares Rosakis, Theodore von Kármán Professor of Aeronautics and Mechanical Engineering, show that so-called "stable" or "creeping" faults are not actually immune to major ruptures after all, as previously suspected. Such faults occur when tectonic plates slide past one another slowly, without generating big quakes (for example, the currently creeping section of the San Andreas Fault in central California).

Instead, rock gouge has a complex behavior. It first acts as a barrier to the rupture, absorbing energy and blocking its progress. But, when the plates slide past each other with high enough velocity, the rock gouge interface weakens and dramatically reduces friction between the two plates, causing the re-emergence of the quake. This process is known as "renucleation."

"Based on the previous rich body of rock-friction experiments, we know that rock gouge can either strengthen with fault slip and act as a barrier, or weaken and promote earthquake rupture," Lapusta says. "However, these behaviors are typically considered to be separated in space, with weakening and strengthening occurring on different fault locations. Our experiments show how these behaviors can combine on the same fault locations during the same slip event, over the timescales of dynamic rupture, leading to intermittent slip and potentially turning a fault barrier into an earthquake-prone region."

The Nature study explores the role and reaction of rock gouge, a micrometer-sized granular material, to seismic activity. To simulate the effect of rock gouge on an earthquake's propagation, the team used Caltech's so-called seismological wind tunnel, founded by Rosakis and former Caltech Seismological Laboratory director Hiroo Kanamori, John E. and Hazel S. Smits Professor of Geophysics, Emeritus. The facility, in existence since 1999, allows engineers and scientists to study major earthquakes on a miniature scale.

To simulate an earthquake, the team first cut in half a transparent meter-sized block of a type of plastic known as Homalite. The bulk properties of Homalite enable dynamic rupture nucleation within samples as small as tens of centimeters in diameter; studying these effects in rock would require samples that are tens of meters in size.

The researchers then placed the two halves of the Homalite together under high pressure and shear (a situation in which the two halves want to slide against one another in opposite directions), simulating tectonic pressure that slowly builds up along a fault line. Between the pieces, fine-grained quartz powder was embedded as a stand-in for fault gouge. Next, the team put a small wire fuse between the two halves; its location was the "epicenter" of the earthquake they planned to simulate. As the simulated quake progressed, high-speed imaging technology was used to record its evolution, one millionth of a second at a time.

"Back in the late 1990s, when we were designing the 'seismological wind tunnel,' we could never have imagined its success in discovering such a rich spectrum of physical phenomena relating to frictional earthquake source processes and that such phenomena could rigorously be scaled to explain natural earthquake behavior occurring at massively different length scale around the globe," Rosakis says. "This is a testament of the tremendous power of the discipline of mechanics."

Next, the team plans to study the effects of fluids, which are naturally present in Earth's crust, on the frictional behavior of rock gouge.

The Nature paper is titled "Intermittent lab earthquakes in dynamically weakening fault gouge." This research was funded by the National Science Foundation (NSF), the U.S. Geological Survey, the NSF–IUCRC program at Caltech's Center for Geomechanics and Mitigation of Geohazards (GMG), and the Southern California Earthquake Center (SCEC).