Sending a spacecraft to Jupiter and into its extreme radiation environment—1,000 times more intense than Earth's—is a daring endeavor. On the evening of July 4, 2016, engineers and scientists at NASA's Jet Propulsion Laboratory in Pasadena put their ingenuity and years of efforts to the test as the Juno mission traveled through Jupiter's radiation belts en route to the planet. Cheers erupted at JPL's mission control at 8:53 p.m. Pacific Daylight Time, when Juno sent back signals indicating that the spacecraft had finished an engine burn that successfully placed it into orbit around Jupiter.

About an hour later, the mission team, clad in matching Juno polo shirts, entered JPL's Von Kármán Auditorium to an outpouring of cheers. Several team members took the stage for a news briefing, where they reported on the status of Juno.

"It's amazing, it feels wonderful, and it's also just the beginning," said JPL's Juno Project Scientist Steve Levin, describing how it felt to have made it into orbit around Jupiter.

Juno is now the first spacecraft to ever orbit the poles of Jupiter, and it will have the closest orbit of any mission yet, descending to within 3,000 miles above the cloud tops. Previous missions to Jupiter such as NASA's Voyager and Galileo spacecraft returned unprecedented images and data. However, those earlier probes orbited around the equator, leaving gaps in our maps and overall understanding of the solar system's most massive planet.

The Juno probe is currently in a 53.5-day orbit around Jupiter, as its instruments are checked out. On October 19, it will begin its 14-day science orbits, and will begin to look into Jupiter's clouds to investigate mysteries such as how this planet with a mass more than 300 times that of Earth formed. Juno will also gather information on the planet's magnetosphere, an invisible bubble of trapped charged particles and radiation that would appear to be bigger than the sun if viewable from Earth.

Caltech's Andrew Ingersoll, professor of planetary science and a Juno team member, says he is looking forward to the unexpected. Ingersoll has been involved with six other NASA missions—Pioneer Venus, Pioneer Saturn/Jupiter, Voyager 1 and 2, Mars Global Surveyor, Galileo, and Cassini.

"I live for the surprises," Ingersoll says. For example, the Voyager 1 mission in the late 1970s discovered that Io, a moon of Jupiter, had volcanoes and molten lava. "It was mind-blowing," he says.

This time, Ingersoll says he is most excited to address a question that has persisted for decades: how much water does Jupiter hold?

"We still don't know how much water is in Jupiter," he says. "But the answer to that question will help us understand how Earth got its oceans."

Scientists theorize that Earth, which would have been initially dry due to its proximity to the sun, received its water supply from comets and asteroids. The intense gravity of Jupiter would have scattered comets and asteroids toward Earth; some of those objects would have collided with Jupiter, delivering water to it as well. Knowing how much water Jupiter possesses will help test theories of our own oceans' origins.

"Water freezes out on the clouds of Jupiter, so we haven't been able to measure it," says Ingersoll. "The Galileo probe tried to measure water content, too, but it just happened to have been dropped into a particularly desert-like latitude."

To determine the amount of water throughout Jupiter, Juno's microwave radiometer will look about 300 miles below the clouds tops, where water vapor has not condensed out and is easier to detect. Jupiter's radiation belts give off microwave signals that would interfere with the radiometer's sensors, but because of Juno's vantage point below the belts, the instrument will be able to capture spectral information on water that cannot be obtained otherwise.

Using data from additional instruments, Juno also should reveal more about the persistent jet streams and storms that roil the surface of Jupiter, such as the famous Great Red Spot. Discovering how deep the storms go could offer insight into why they can last for hundreds of years. "When you stir cream into coffee, it swirls together to form a lighter color," Ingersoll says. "But on Jupiter, the storms don't dissipate. We have some ideas about why this occurs, but questions persist."

Caltech's two other Juno team members are also eager to analyze the data Juno will collect. Dave Stevenson, Marvin L. Goldberger Professor of Planetary Science, leads the mission's interiors working group, which will use information about Jupiter's magnetic field and gravity to study wind motions below the surface as well as to determine the mass of the core and structure of the planet. Ed Stone, David Morrisroe Professor of Physics and vice provost for special projects, is the Juno senior advisor for science and management, a position he earned based on his more than four decades of experience as the Voyager project scientist. Stone is looking forward to learning more about Jupiter's magnetosphere, which creates the planet's brightly glowing auroras.

Juno's instruments were turned off during the mission's orbit-insertion maneuver through Jupiter's radiation fields. The spacecraft now circles the planet in an elliptical orbit that safely avoids the radiation, so the instruments have been turned on. When Juno swings back around and passes closely over Jupiter on August 27, the instruments will be ready, and the world will get its first close-up look of the planet's poles. "We're ready for whatever Jupiter might throw at us," says Ingersoll. 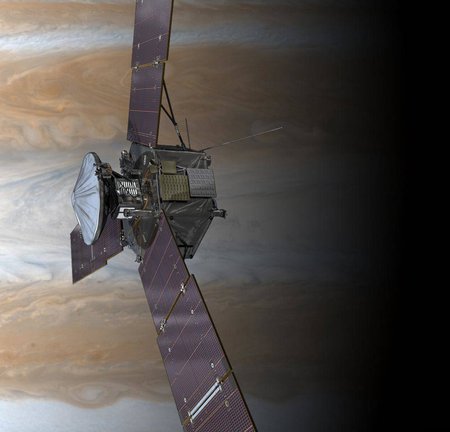 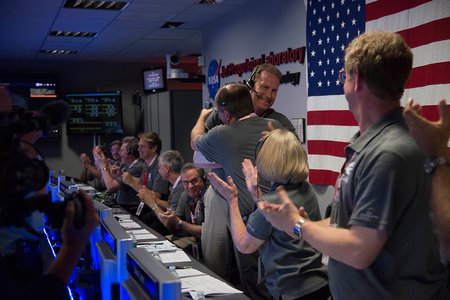 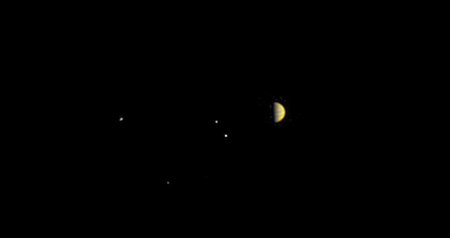 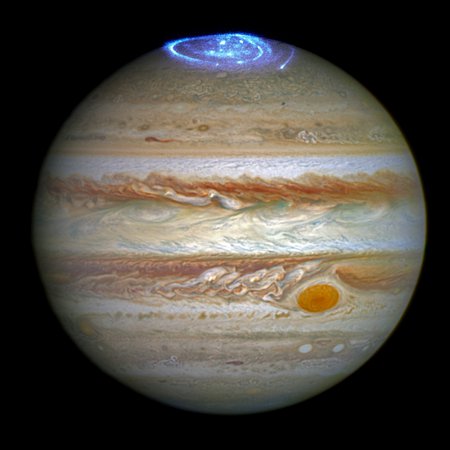 Jupiter's auroras as seen in ultraviolet light by NASA's Hubble Space Telescope. The color image of Jupiter itself was taken by Hubble at a different time. Credit: NASA, ESA, and J. Nichols (University of Leicester)
Image Gallery Lightbox 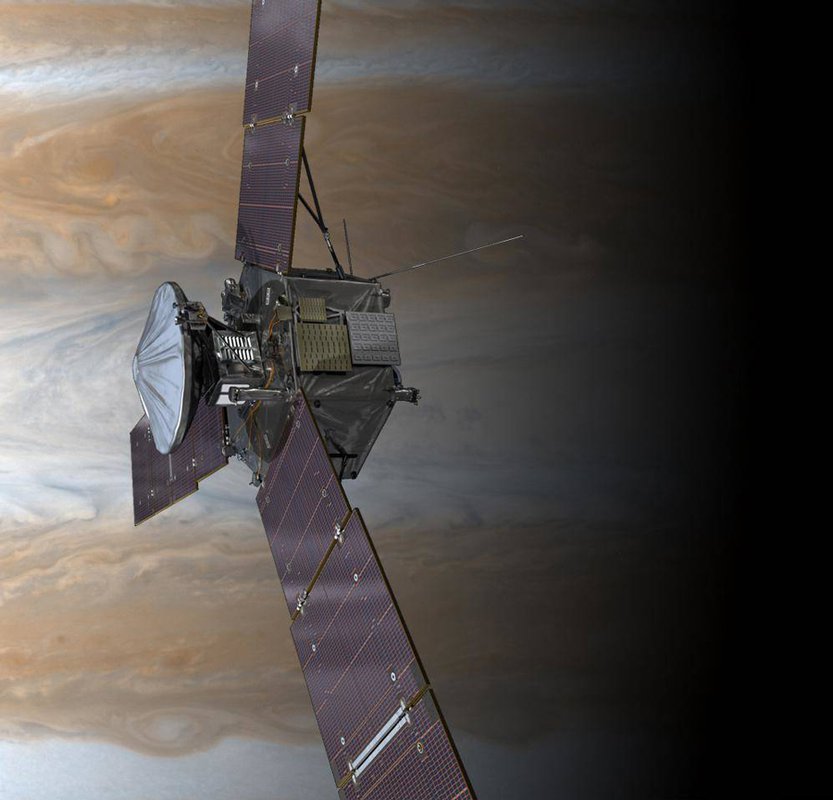 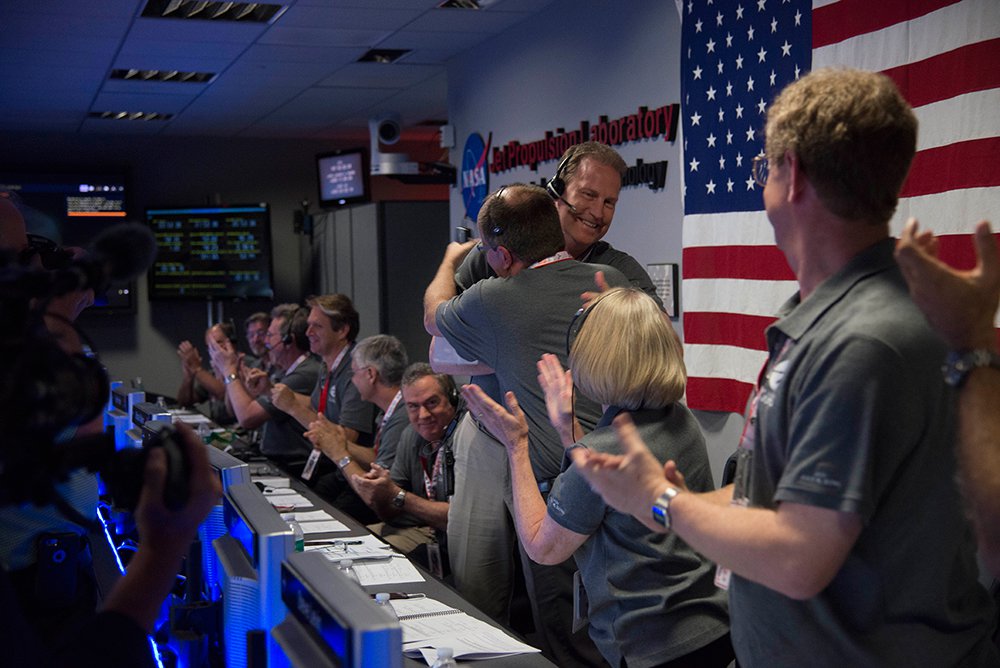 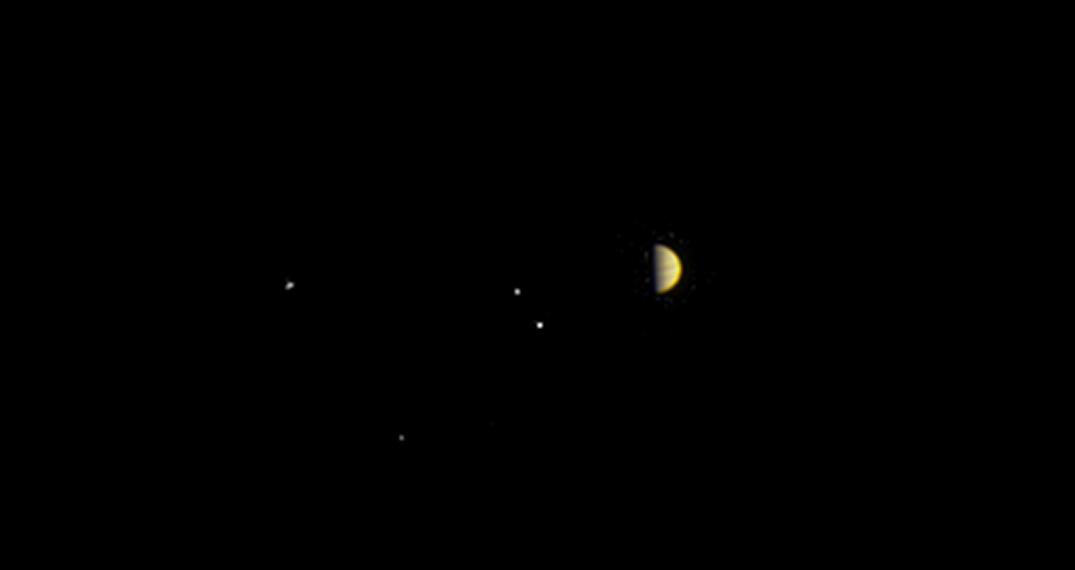 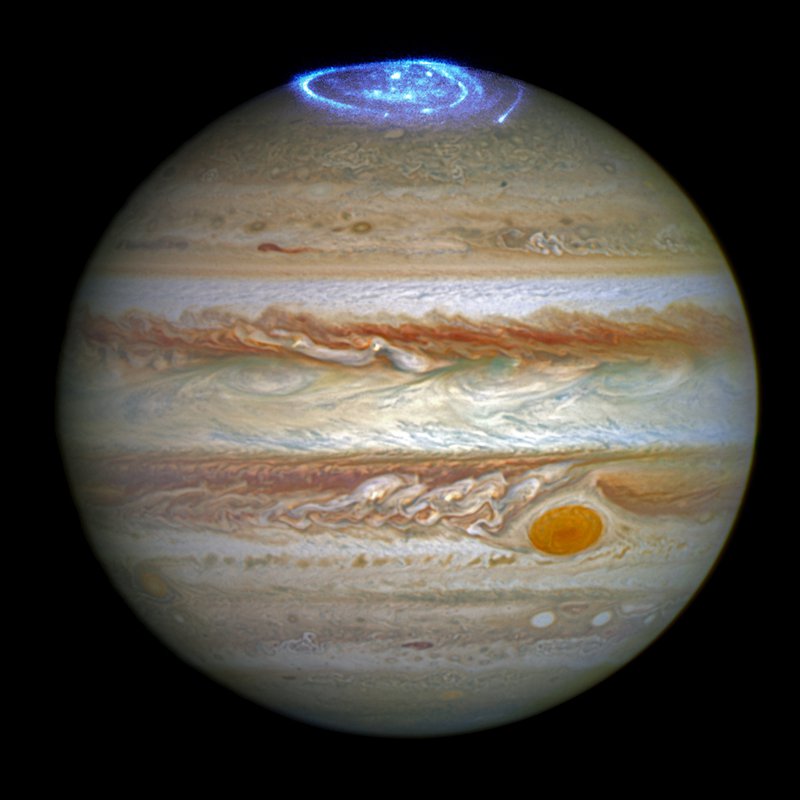 Jupiter's auroras as seen in ultraviolet light by NASA's Hubble Space Telescope. The color image of Jupiter itself was taken by Hubble at a different time.
Credit: NASA, ESA, and J. Nichols (University of Leicester)
Download Full Image