Caltech astronomers have taken unprecedented images of the intergalactic medium (IGM)—the diffuse gas that connects galaxies throughout the universe—with the Cosmic Web Imager, an instrument designed and built at Caltech. Until now, the structure of the IGM has mostly been a matter for theoretical speculation. However, with observations from the Cosmic Web Imager, deployed on the Hale 200-inch telescope at Palomar Observatory, astronomers are obtaining our first three-dimensional pictures of the IGM. The Cosmic Web Imager will make possible a new understanding of galactic and intergalactic dynamics, and it has already detected one possible spiral-galaxy-in-the-making that is three times the size of our Milky Way.

The Cosmic Web Imager was conceived and developed by Caltech professor of physics Christopher Martin. "I've been thinking about the intergalactic medium since I was a graduate student," says Martin. "Not only does it comprise most of the normal matter in the universe, it is also the medium in which galaxies form and grow."

Since the late 1980s and early 1990s, theoreticians have predicted that primordial gas from the Big Bang is not spread uniformly throughout space, but is instead distributed in channels that span galaxies and flow between them. This "cosmic web"—the IGM—is a network of smaller and larger filaments crisscrossing one another across the vastness of space and back through time to an era when galaxies were first forming and stars were being produced at a rapid rate.

Martin describes the diffuse gas of the IGM as "dim matter," to distinguish it from the bright matter of stars and galaxies, and the dark matter and energy that compose most of the universe. Though you might not think so on a bright sunny day or even a starlit night, fully 96 percent of the mass and energy in the universe is dark energy and dark matter (first inferred by Caltech's Fritz Zwicky in the 1930s), whose existence we know of only due to its effects on the remaining 4 percent that we can see: normal matter. Of this 4 percent that is normal matter, only one-quarter is made up of stars and galaxies, the bright objects that light our night sky. The remainder, which amounts to only about 3 percent of everything in the universe, is the IGM.

As Martin's name for the IGM suggests, "dim matter" is hard to see. Prior to the development of the Cosmic Web Imager, the IGM was observed primarily via foreground absorption of light—indicating the presence of matter—occurring between Earth and a distant object such as a quasar (the nucleus of a young galaxy).

Matt Matuszewski, a former graduate student at Caltech who helped to build the Cosmic Web Imager and is now an instrument scientist at Caltech, likens this line-of-sight view to observing a complex cityscape through a few narrow slits in a wall: "All you would know is that there is some concrete, windows, metal, pavement, maybe an occasional flash of color. Only by opening the slit can you see that there are buildings and skyscrapers and roads and bridges and cars and people walking the streets. Only by taking a picture can you understand how all these components fit together, and know that you are looking at a city."

Martin and his team have now seen the first glimpse of the city of dim matter. It is not full of skyscrapers and bridges, but it is both visually and scientifically exciting.

The first cosmic filaments observed by the Cosmic Web Imager are in the vicinity of two very bright objects: a quasar labeled QSO 1549+19 and a so-called Lyman alpha blob in an emerging galaxy cluster known as SSA22. These objects were chosen by Martin for initial observations because they are bright, lighting up the surrounding IGM and boosting its detectable signal.

Observations show a narrow filament, one million light-years long, flowing into the quasar, perhaps fueling the growth of the galaxy that hosts the quasar. Meanwhile, there are three filaments surrounding the Lyman alpha blob, with a measured spin that shows that the gas from these filaments is flowing into the blob and affecting its dynamics.

The Cosmic Web Imager is a spectrographic imager, taking pictures at many different wavelengths simultaneously. This is a powerful technique for investigating astronomical objects, as it makes it possible to not only see these objects but to learn about their composition, mass, and velocity. Under the conditions expected for cosmic web filaments, hydrogen is the dominant element and emits light at a specific ultraviolet wavelength called Lyman alpha. Earth's atmosphere blocks light at ultraviolet wavelengths, so one needs to be outside Earth's atmosphere, observing from a satellite or a high-altitude balloon, to observe the Lyman alpha signal.

However, if the Lyman alpha emission lies much further away from us—that is, it comes to us from an earlier time in the universe—then it arrives at a longer wavelength (a phenomenon known as redshifting). This brings the Lyman alpha signal into the visible spectrum such that it can pass through the atmosphere and be detected by ground-based telescopes like the Cosmic Web Imager.

The objects the Cosmic Web Imager has observed date to approximately 2 billion years after the Big Bang, a time of rapid star formation in galaxies. "In the case of the Lyman alpha blob," says Martin, "I think we're looking at a giant protogalactic disk. It's almost 300,000 light-years in diameter, three times the size of the Milky Way."

The Cosmic Web Imager was funded by grants from the NSF and Caltech. Having successfully deployed the instrument at the Palomar Observatory, Martin's group is now developing a more sensitive and versatile version of the Cosmic Web Imager for use at the W. M. Keck Observatory atop Mauna Kea in Hawaii. "The gaseous filaments and structures we see around the quasar and the Lyman alpha blob are unusually bright. Our goal is to eventually be able to see the average intergalactic medium everywhere. It's harder, but we'll get there," says Martin.

Plans are also under way for observations of the IGM from a telescope aboard a high-altitude balloon, FIREBALL (Faint Intergalactic Redshifted Emission Balloon); and from a satellite, ISTOS (Imaging Spectroscopic Telescope for Origins Surveys). By virtue of bypassing most, if not all, of our atmosphere, both instruments will enable observations of Lyman alpha emission—and therefore the IGM—that are closer to us; that is, that are from more recent epochs of the universe. 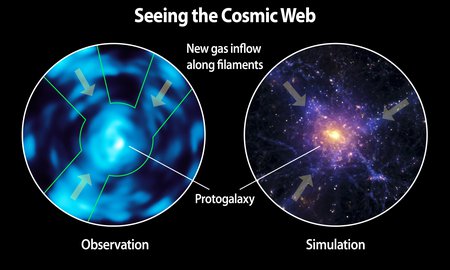 Comparison of Lyman alpha blob observed with Cosmic Web Imager and a simulation of the cosmic web based on theoretical predictions. Credit: Christopher Martin, Robert Hurt 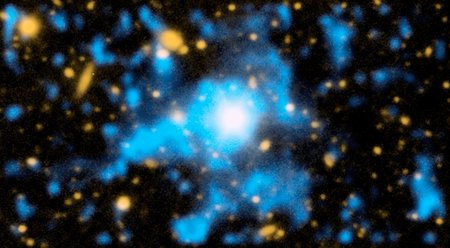 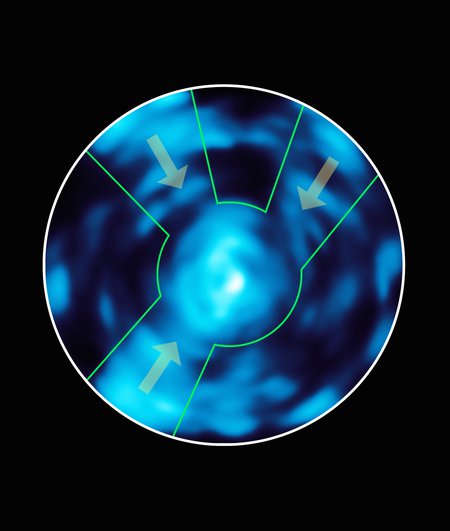 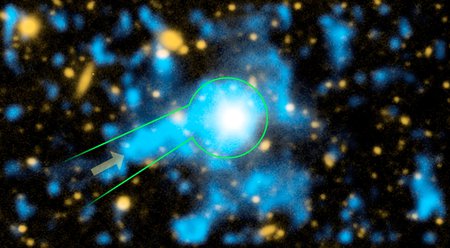 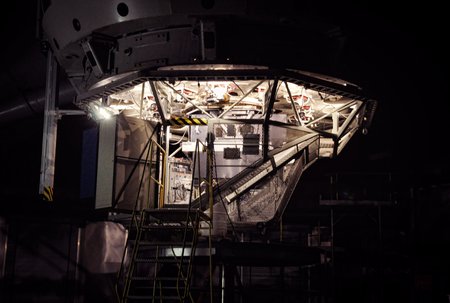 The Cosmic Web Imager installed in the Cassegrain cage of the Hale 200 inch telescope at Palomar Observatory. Credit: Anna Moore 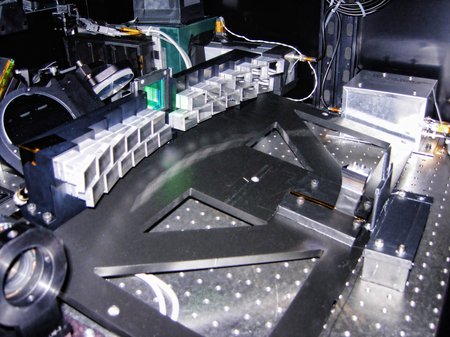 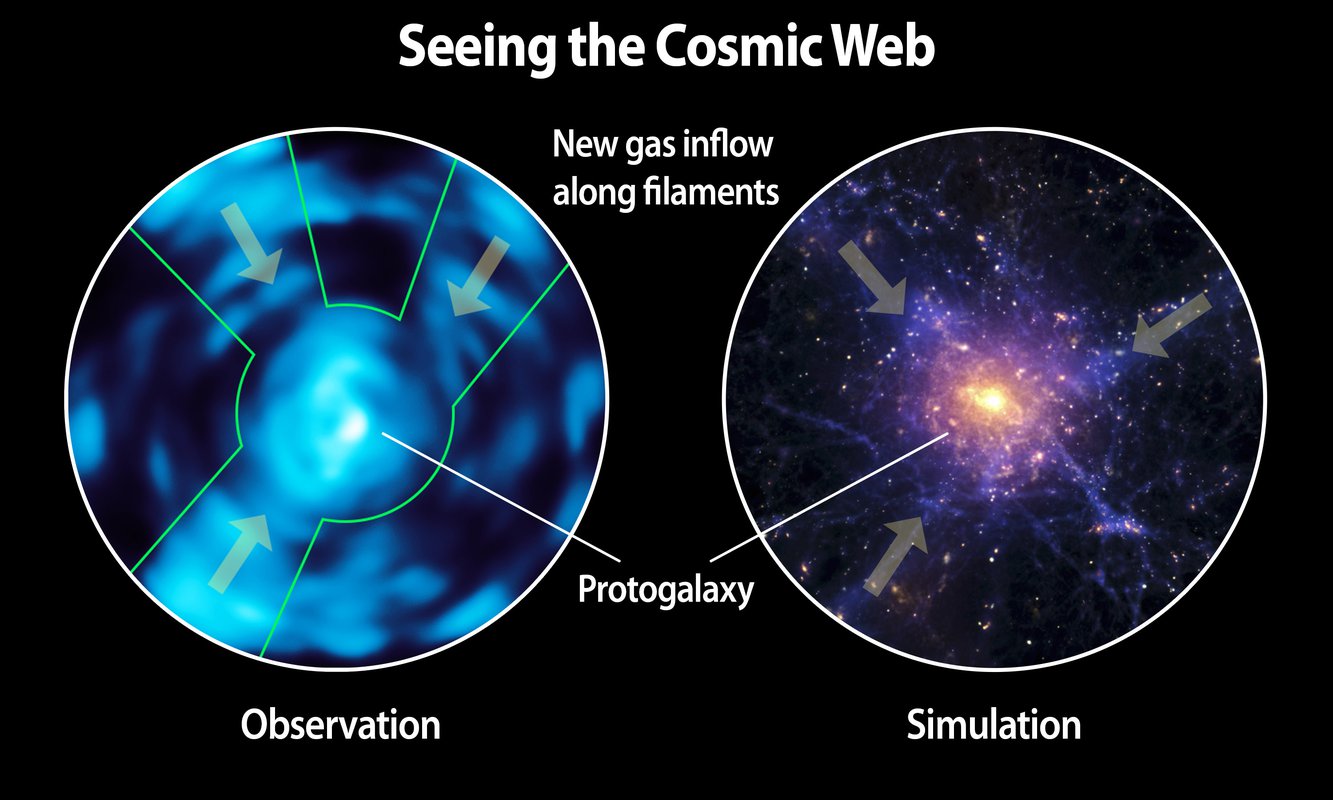 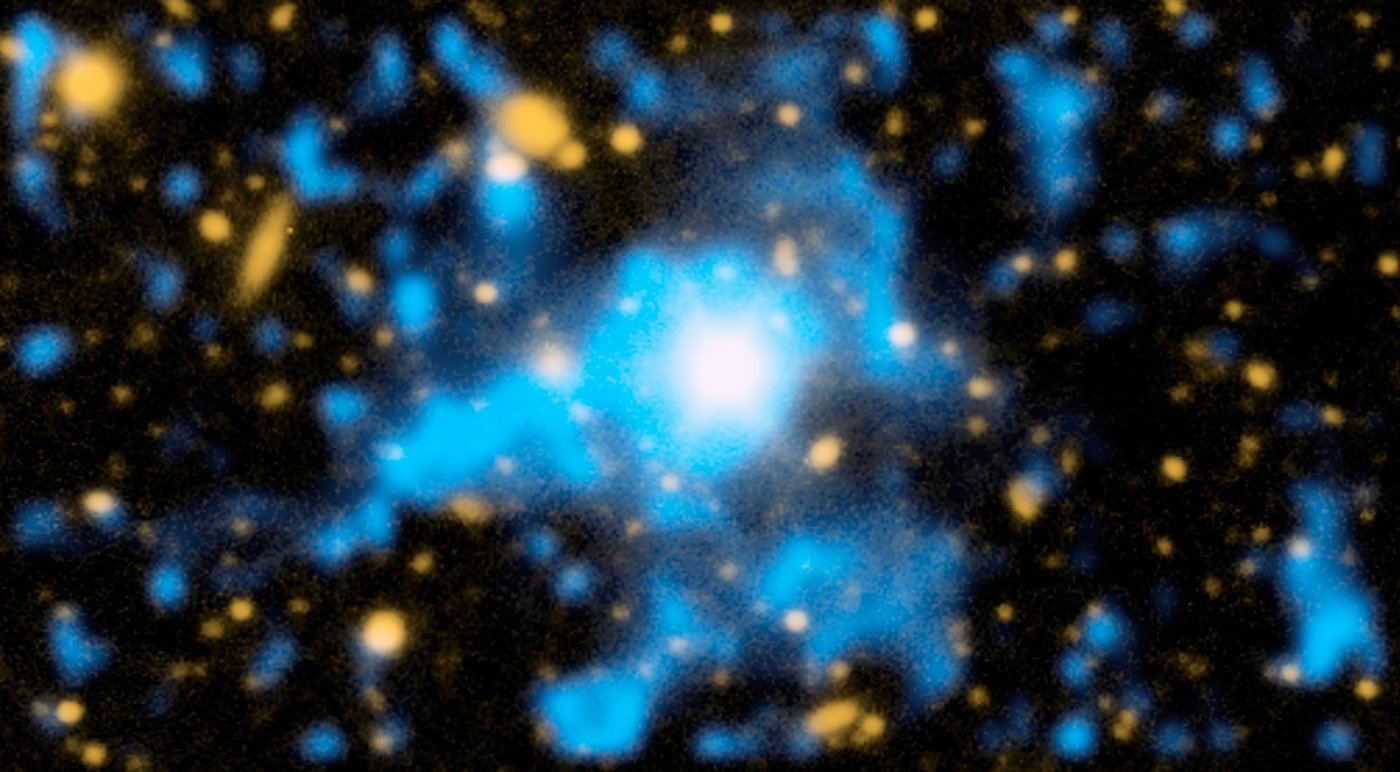 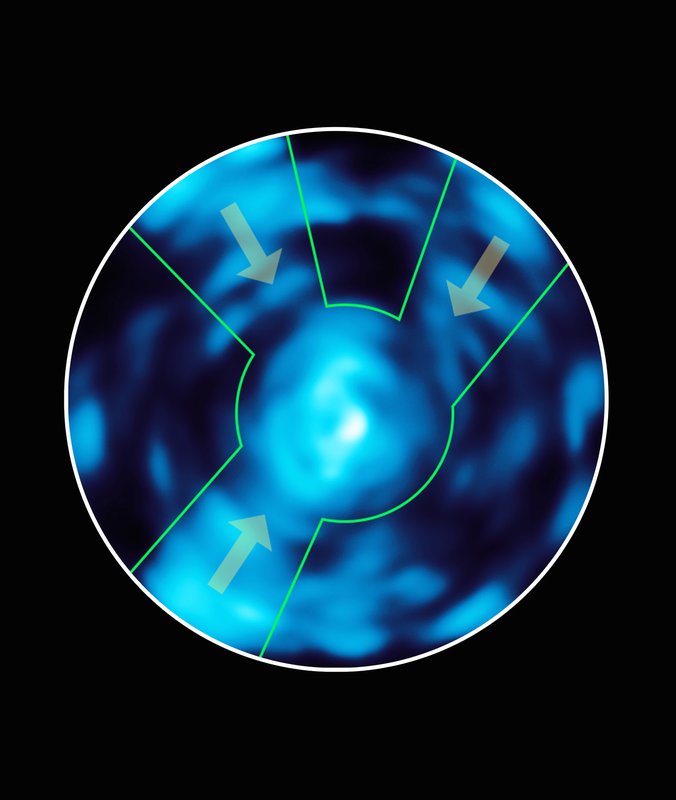 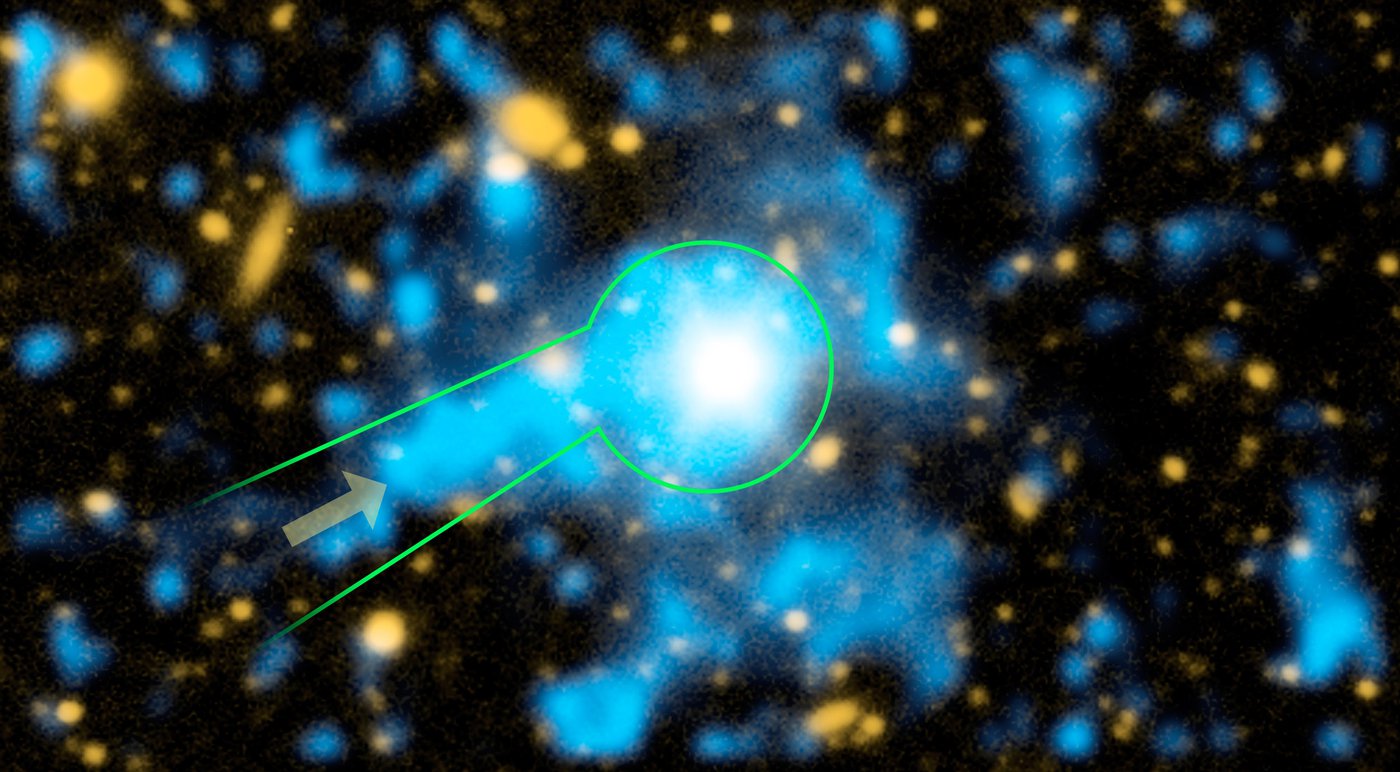 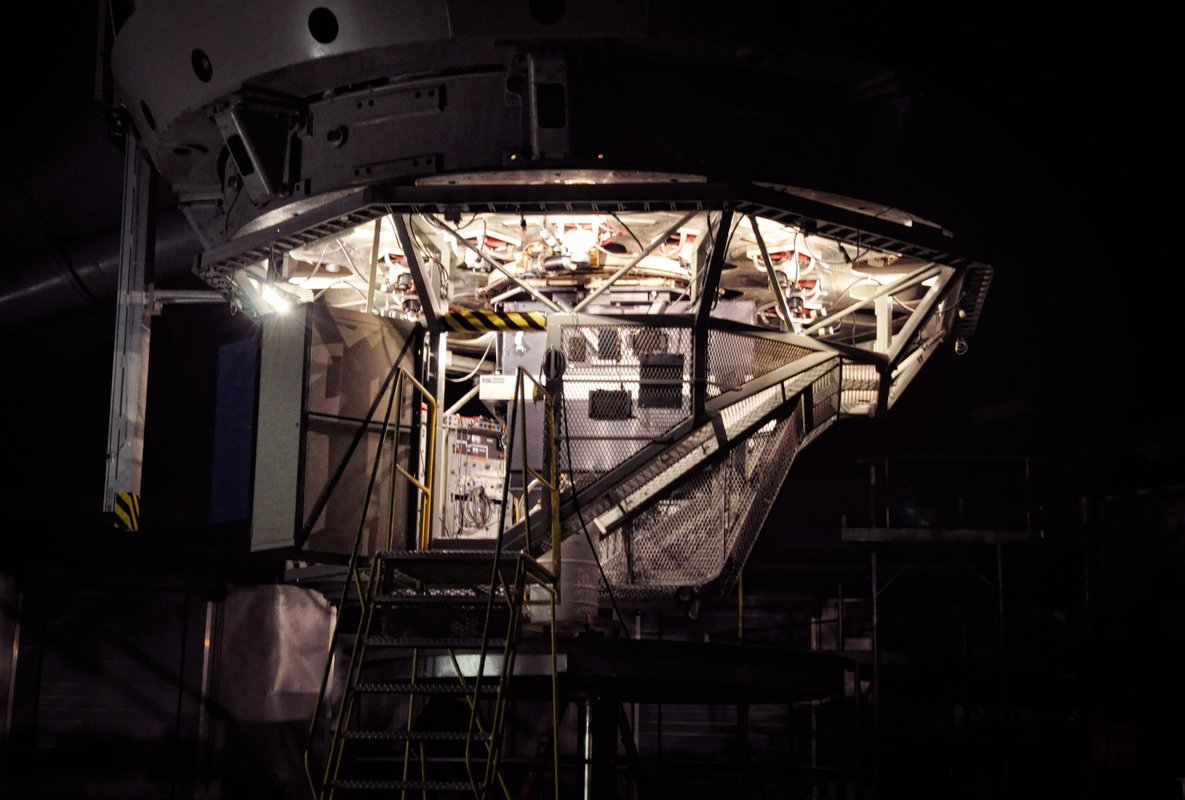 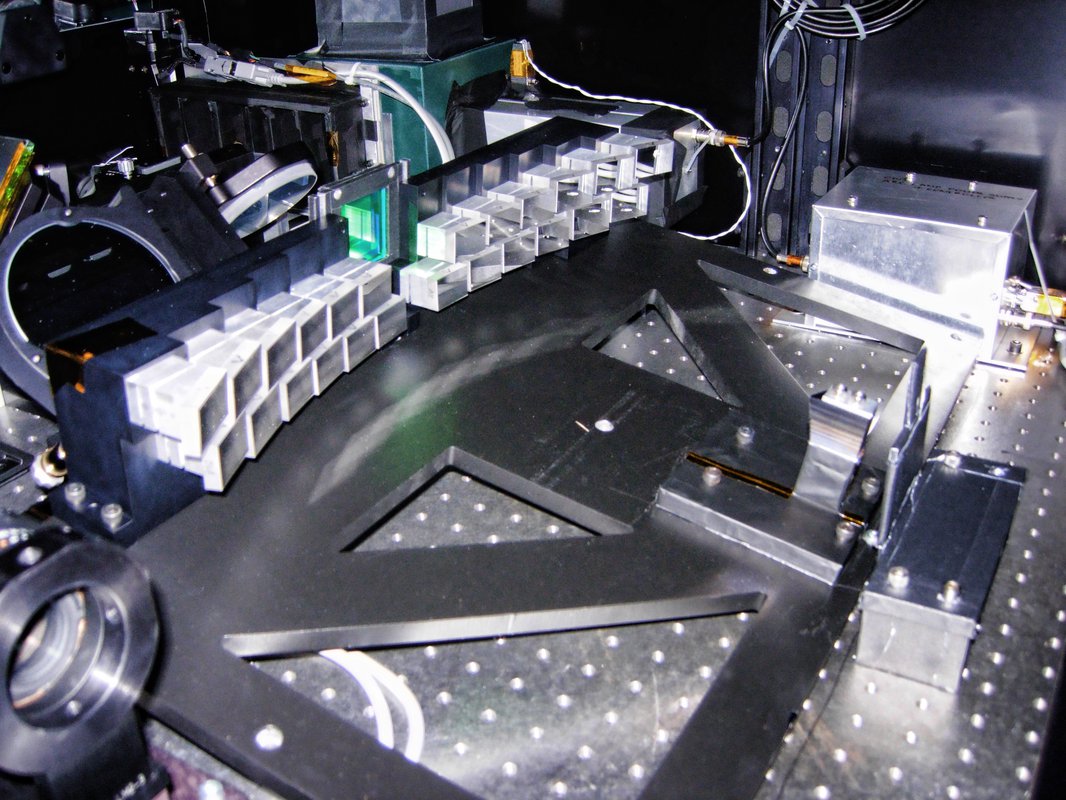