Cutting-edge mathematics today, at least to the uninitiated, often sounds as if it bears no relation to the arithmetic we all learned in grade school. What do topology and combinatorics and n-dimensional space have to do with addition, subtraction, multiplication, and division? Yet there remains within mathematics one vibrant field of study that makes constant reference to basic arithmetic: number theory. Number theory—the "queen of mathematics," according to the famous 19th century mathematician Carl Friedrich Gauss—takes integers as its starting point. Begin counting 1, 2, 3, and you enter the domain of number theory.

It is these equations that are the inspiration for a recent proof offered by Dinakar Ramakrishnan, Caltech's Taussky-Todd-Lonergan Professor of Mathematics and executive officer for mathematics, and his coauthor, Mladen Dimitrov, formerly an Olga Taussky and John Todd Instructor in Mathematics at Caltech and now professor of mathematics at the University of Lille in France. This proof involves homogeneous equations: equations in which all the terms have the same degree. For example, the polynomial xy + z2 has degree 2, and x2yz + xy3 has degree 4.  If we take an equation like xy = z2, one solution for (x, y, z) would be (1, 4, 2). Multiplying that solution by any rational number will give infinitely many rational solutions, but this is a trivial way to get solutions achieved simply by "scaling." These are not the type of answers Ramakrishnan and Dimitrov were searching for.

What Ramakrishnan and Dimitrov showed is that a specific collection of systems of homogeneous equations with six variables has only a finite number of rational solutions (up to scaling). Usually people look for integer solutions of Diophantine equations, but the first approach is to find solutions in rational numbers—those that can be expressed as a fraction of two integers.

Diophantus, after whom the Diophantine equations are named, is best known for his Arithmetica, which Ramakrishnan describes as "a collection of intriguing mathematical problems, some of them original to Diophantus, others an assemblage of earlier work, some of it possibly going back to the Babylonians." Diophantus lived in the city of Alexandria, in what is now Egypt, during the third century CE. What makes the Arithmetica unusual is that it continues to serve as the basis for some very interesting mathematics more than 1,700 years later.

Diophantus was interested primarily in positive integers. He was aware of the existence of rational numbers, since he knew integers could divide one another, but he seemed to regard negative numbers (which are also rational numbers and can be integers) as absurd and unreal. Present-day number theorists have no such discomfort with negative numbers, but they continue to be as fascinated by integers as Diophantus was. "Integers are very special," says Ramakrishnan. "They are kind of like musical notes on a clavier. If you change a note even slightly, you'll hear a dissonance. In a sense, integers can be thought of as the well-tempered states of mathematics. They are quite beautiful."

Diophantus was especially interested in integer solutions for homogeneous polynomial equations: those in which each term of the equation has the same degree (for example, x7 + y7 = z7 or x2y3z = w6). The classic example of a homogeneous polynomial equation is the Pythagorean theorem—x2 + y2 = z2—which defines the hypotenuse, z, the longest side of a right triangle, with respect to the perpendicular sides x and y. As early as 1600 BCE, the ancient Babylonians knew that there were many integer solutions to this equation (beginning with 32 + 42 = 52), though it was Pythagoras, a Greek mathematician living in the sixth century BCE, who gave his name to the formula, and Euclid who two centuries later proved that this equation has an infinite number of positive integer solutions, known as "Pythagorean triples" (such as 3, 4, 5; 5, 12, 13; or 39, 80, 89).

In 1637, French mathematician Pierre de Fermat famously wrote in the margin of Diophantus's Arithmetica that he had a "truly marvelous proof" showing that although there were an infinite number of positive integer solutions for x2 + y2 = z2, there were no positive integer solutions at all when the variables were raised to the power of three or higher (x3 + y3 = z3; x4 + y4 = z4 ; . . . ; xn + yn = zn). Fermat did not provide the actual proof; he claimed that the margin of Diophantus's book was too small to contain it. Fermat's conjecture (it was not yet a proof, though Fermat apparently believed he had one in his mind) remained unsolved until the early 1990s, when British mathematician Andrew Wiles created a complicated and unexpected proof that made use of previously unrelated mathematical principles.

In geometric terms, Fermat's conjecture and Wiles's proof, with their three variables, operate in three-dimensional space and can be described as points on a curve on the projective plane, drawn with x, y, z coordinates up to scaling. By moving to a greater number of variables, Ramakrishnan and Dimitrov are interested in identifying points on so-called hyperbolic surfaces. A hyperbolic surface is a negatively curved space, like a saddle—as opposed to a positively curved space like a sphere—in which the rules of Euclidean geometry no longer apply. A simple example of a hyperbolic surface is given by the simultaneous solution (where the values of the variables are held constant) of three equations: x15 + y5 = z5; x25 + w5 = z5; and x35 + w5 = y5. In the 1980s, German mathematician Gerd Faltings did pioneering work on the mathematics of hyperbolic curves, work that inspired Ramakrishnan and Dimitrov.

Ramakrishnan and Dimitrov's recent finding considers rational-number solutions for several systems of homogeneous polynomial equations describing hyperbolic surfaces. One solution is to set all the variables to zero. This solution is considered trivial; but are there any nontrivial solutions?

There are at least a few nontrivial solutions that Ramakrishnan and Dimitrov use as examples. Their challenge was to determine if there are finitely many or infinitely many rational solutions. They demonstrated—in a proof-by-contradiction that took nearly two years to complete—that the hyperbolic case they consider has only a finite number of solutions.

But, as Ramakrishnan remarks, there is no rest for number theorists, because "even if we solve another bunch of equations, there are still many more that are unsolved, enough for our descendants five hundred years from now."

For Ramakrishnan, this is not a counsel of despair. He continues to find mathematics exciting, especially the concept of the mathematical proof. As he points out, "In other ancient civilizations in the Middle East or India or China, they did some very complicated math, but it was more algorithmic, more related to computer science in my opinion than to philosophy. Whereas the Greeks emphasized proofs, rigorously establishing mathematical truths. There's nothing vague about it."

Apart from the inherent joy of pushing number theory forward through another generation, Ramakrishnan points out that this field has interesting applications in both science and everyday life. "Quite often in science, you are counting. Think of balancing chemical equations such as wCH4 + xO2 —> yCO2 + zH2O, in which methane oxidizes to produce carbon dioxide and water. This is a linear Diophantine equation."

Number theory also plays an important role in encryption. "Every time one visits a website with an https:// address," says Ramakrishnan, "it is likely that the website browser is using an encryption system that validates the certificate for the remote server to which one is trying to connect. The security keys that are exchanged point to a number-theoretic solution. Most people prefer equations with simple solutions, but in some situations, such as encryption, you actually want integer equations that are hard to solve without the key. This is where number theory comes in."

Ramakrishnan and Dimitrov's paper, "Compact arithmetic quotients of the complex 2-ball and a conjecture of Lang," is posted on the math arXiv, a Cornell University Library open e-print archive for papers in physics, mathematics, computer science, quantitative biology, and quantitative finance and statistics. 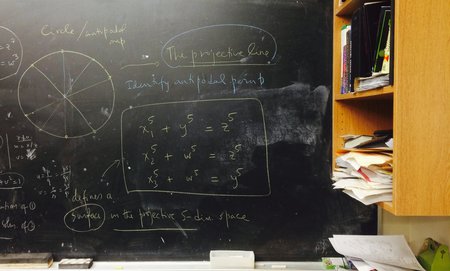 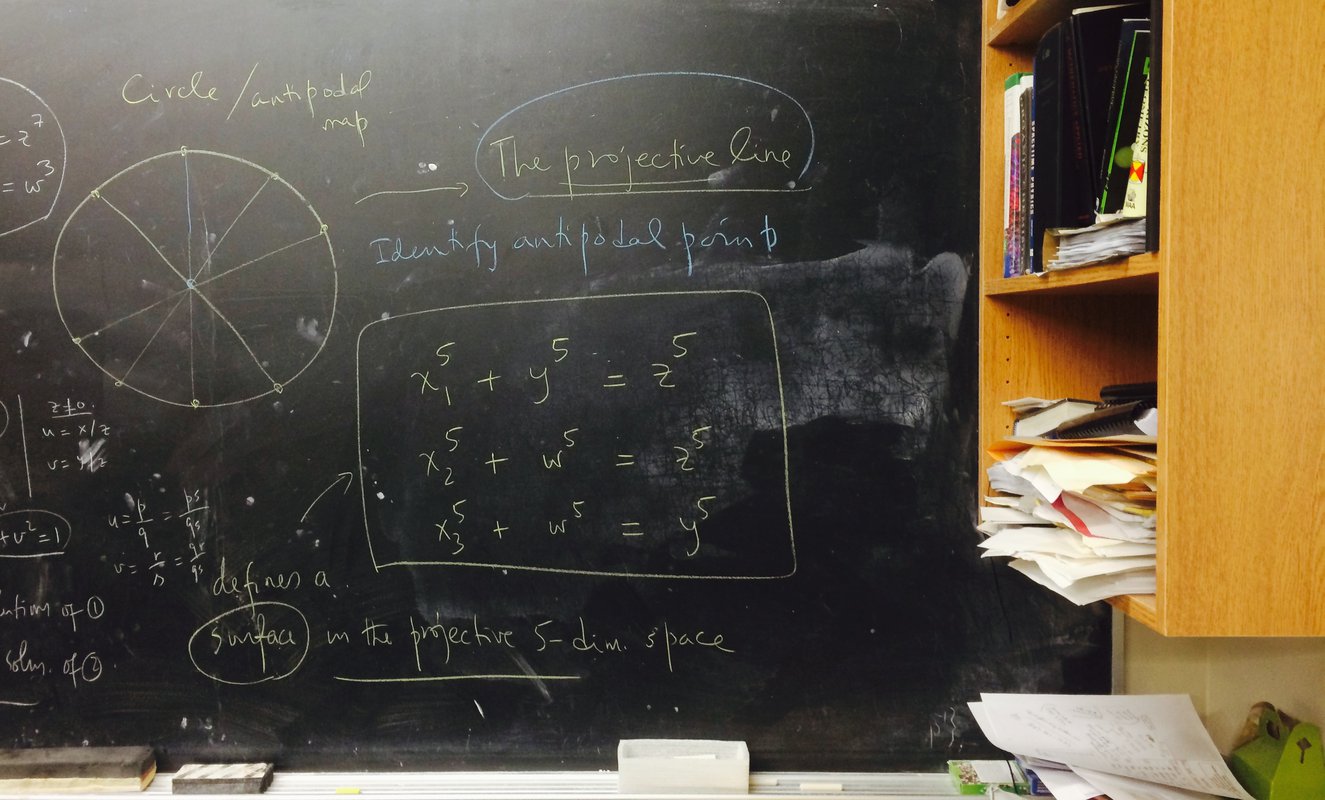