Early in the development of female embryos, a crucial event occurs in all cells: An X chromosome is silenced. Whereas males have only one X chromosome, females have two—which means they can have twice as many proteins generated from their X chromosomes. Too much of certain proteins can be lethal, so nature has figured out a way to turn off one X chromosome.

A new paper published in the journal Science highlights an essential step in this process, showing for the first time that changes to the three-dimensional structure of DNA in the nucleus are required for X-chromosome silencing, also known as X inactivation. More specifically, the study demonstrates that a single molecule called Xist is responsible for the DNA remodeling, and that these changes lead to chromosome silencing.

"We had this chicken and egg problem, because we knew DNA structure changes occurred during the process of X inactivation, but we didn't know whether these changes caused silencing or were merely a result of silencing," says Caltech Assistant Professor of Biology Mitchell Guttman, the leader of the research. "Beyond the X chromosome, our results highlight the important role that dynamic arrangement of DNA plays in turning on and off different genes."

The research is part of an international effort to understand better how DNA is packaged as a three-dimensional structure in the nucleus, and how changes to this structure lead to the silencing and activation of genes. Different genes—which are located on the DNA strands—are either turned on or off in any given cell; when they are on, they produce proteins. The shape and folding patterns of DNA control this process, but the details are unclear. A recently funded consortium established by the National Institutes of Health, called the 4D Nucleome program (with the fourth dimension being time), aims to solve this mystery of DNA architecture and its role in various human diseases such as cancer and premature aging diseases.

In the new study, the researchers focused on Xist, which was previously known to play a role in X-chromosome silencing. Xist belongs to a class a RNA molecules known as long non-coding RNA, or lncRNA (pronounced link RNA). Whereas traditional RNA molecules known as messenger RNAs act as templates that are made into proteins, lncRNAs such as Xist can directly bind to DNA to turn on and off genes. In the last decade, tens of thousands of lncRNAs have been discovered.

Previous studies have shown that Xist binds all along the DNA strands of silenced X chromosomes, but not to the active X chromosomes. Researchers also knew that changes to DNA's three-dimensional structure and position in the cell were associated with silencing. But how and if Xist played a role in the structural DNA changes was not known.

The new study outlines the process by which Xist orchestrates chromosome silencing and introduces a key player: a protein called the lamin B receptor, located in the envelope that surrounds a cell's nucleus.

"Our work demonstrates that Xist, through its direct interaction with the lamin B receptor, recruits the X chromosome to the nuclear envelope and through this leads to changes in the three-dimensional structure of DNA in the nucleus," says Chun-Kan Chen, a graduate student in Guttman's lab and lead author of the Science paper. "This process enables Xist to spread across the entire X chromosome to achieve chromosome-wide silencing—its essential role in embryonic development."

The X chromosome is a good model for studying the relationship between DNA structure and gene silencing, because the whole structure is inactivated by a single RNA molecule. However, other chromosomes experience more localized gene silencing. Guttman and his team are planning additional studies to probe the relationship between DNA's shifting shape and the regulation of other genes in cells. 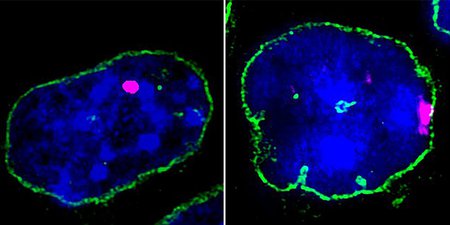 Cartoon explaining how the "lncRNA" molecule Xist orchestrates X-chromosome silencing. Xist binds to DNA in the cell nucleus, where it can silence some genes but not the majority of them. When Xist binds to a nuclear envelope protein called the lamin B receptor, the DNA is pulled over to the periphery of the nucleus. This causes the DNA to remodel its shape, and gives Xist access to other genes on the X-chromosome for silencing. Credit: Caltech
Image Gallery Lightbox 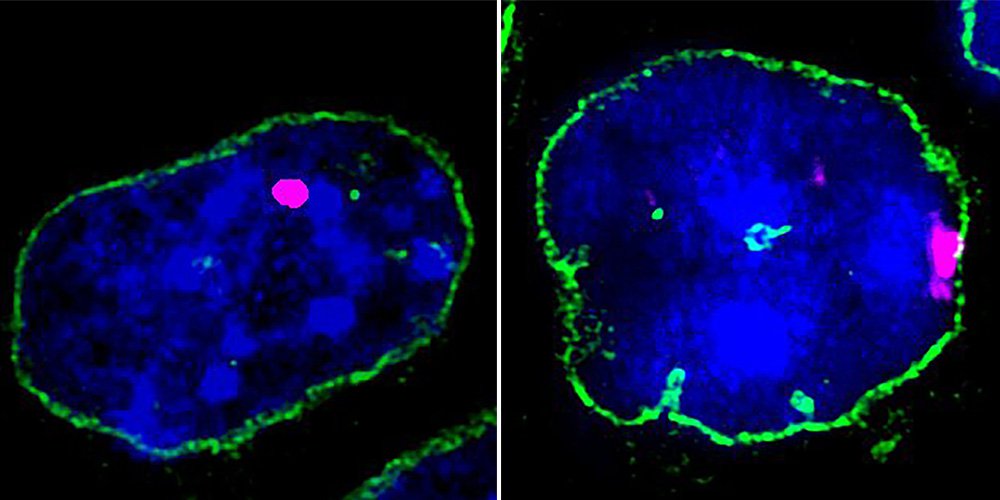 Cartoon explaining how the "lncRNA" molecule Xist orchestrates X-chromosome silencing. Xist binds to DNA in the cell nucleus, where it can silence some genes but not the majority of them. When Xist binds to a nuclear envelope protein called the lamin B receptor, the DNA is pulled over to the periphery of the nucleus. This causes the DNA to remodel its shape, and gives Xist access to other genes on the X-chromosome for silencing.
Credit: Caltech
Download Full Image