How a Giant 'Thermos Bottle' Will Help in Understanding Antimatter

One of the big questions physicists are trying to answer is what happened to all the antimatter in our universe. The universe was born out of a hot soup of both matter and antimatter particles (for example, the antiparticle to an electron is a positron). But something happened billions of years ago to tip the balance to matter, and antimatter disappeared. In fact, if this had not happened, we humans would not be here: when antimatter and matter particles collide, they transform into pure energy.

To address this mystery, researchers at Caltech are taking part in an ambitious multi-institutional project called the neutron Electric Dipole Moment experiment, or nEDM, funded by the U.S. Department of Energy and the National Science Foundation. The project will culminate in an experiment at the Oak Ridge National Laboratory in Tennessee in about three years. The idea is to look for what is called an electric dipole moment in neutrons—a phenomenon in which the charges within a neutron are such that one side of the neutron is a tad more negative than the other. This distortion, if large enough, could signal a breakdown in a type of symmetry in physics called charge parity, or CP, that is needed to explain the absence of antimatter in the universe.

Caltech is building a crucial part of the experiment—a giant cryovessel, pictured above, as well as magnetic shielding and coils to produce magnetic fields. The experiment inside the cryovessel, which can be thought of as a giant thermos bottle, will be chilled to temperatures as low as just one-half a degree above absolute zero, or 0.5 Kelvin (-459 degrees Fahrenheit). The idea is to spin ultracold neutrons in a magnetic field inside the chamber, in the same way that MRI machines spin protons in our bodies. An electric field would then be applied, and the researchers would look for very tiny changes in the way the neutrons are spinning—an indication of an electric dipole moment. The sensitivity of the nEDM experiment is equivalent to measuring a distortion in Earth's diameter of less than one one-hundredth the thickness of a human hair.

The Caltech team expects to deliver the cryovessel, with its magnetic shielding and magnetic field coils, to Oak Ridge in about a year and a half.

Members of the nEDM team stand in front of their magnetic cryovessel experimental apparatus in the Synchrotron Building at Caltech. From left to right: Wei Wanchun, research engineer; Marie Blatnick, graduate student, and Brad Filippone, the Francis L. Moseley Professor of Physics and Spokesperson for the nEDM experiment. 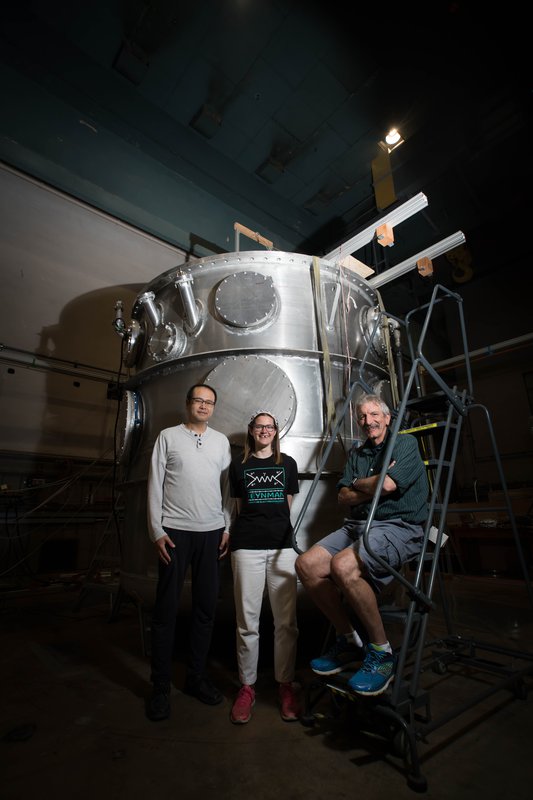 Members of the nEDM team stand in front of their magnetic cryovessel experimental apparatus in the Synchrotron Building at Caltech. From left to right: Wei Wanchun, research engineer; Marie Blatnick, graduate student, and Brad Filippone, the Francis L. Moseley Professor of Physics and Spokesperson for the nEDM experiment.
Credit: Caltech
Download Full Image 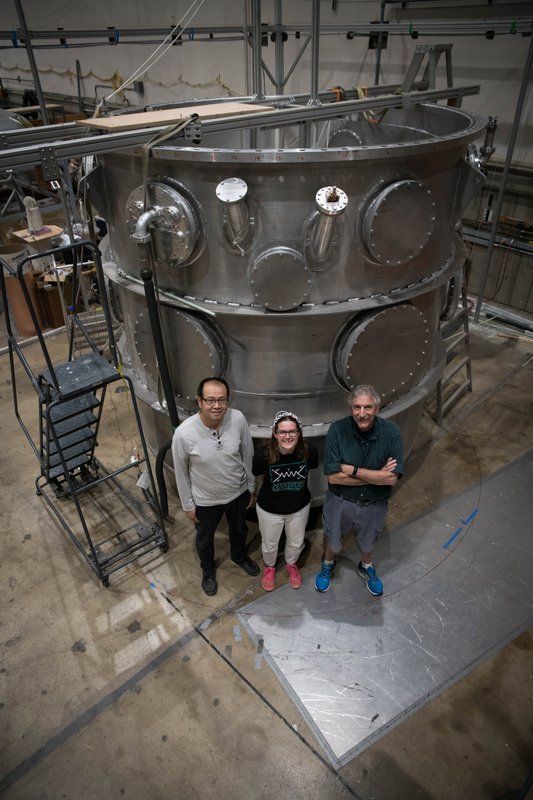