How Friction Evolves During an Earthquake

By simulating earthquakes in a lab, engineers at Caltech have documented the evolution of friction during an earthquake—measuring what could once only be inferred, and shedding light on one of the biggest unknowns in earthquake modeling.

"Friction plays a key role in how ruptures unzip faults in the earth's crust," says Vito Rubino, research scientist at Caltech's Division of Engineering and Applied Science (EAS). "Assumptions about dynamic friction affect a wide range of earthquake science predictions, including how fast ruptures will occur, the nature of ground shaking, and residual stress levels on faults. Yet the precise nature of dynamic friction remains one of the biggest unknowns in earthquake science."

Previously, it commonly had been believed that the evolution of dynamic friction was mainly governed by how far the fault slipped at each point as a rupture went by—that is, by the relative distance one side of a fault slides past the other during dynamic sliding. Analyzing earthquakes that were simulated in a lab, the team instead found that sliding history is important but the key long-term factor is actually the slip velocity—not just how far the fault slips, but how fast.

Rubino is the lead author on a paper on the team's findings that was published in Nature Communications on June 29. He collaborated with Caltech's Ares Rosakis, the Theodore von Kármán Professor of Aeronautics and Mechanical Engineering at EAS, and Nadia Lapusta, professor of mechanical engineering and geophysics, who has joint appointments with EAS and the Caltech Division of Geological and Planetary Sciences.

The team conducted the research at a Caltech facility, directed by Rosakis, that has been unofficially dubbed the "seismological wind tunnel." At the facility, researchers use advanced high-speed optical diagnostics and other techniques to study how earthquake ruptures occur.

"Our unique facility allows us to study dynamic friction laws by following individual, fast-moving shear ruptures and recording friction along their sliding faces in real time," Rosakis says. "This allows us for the first time to study friction point-wise and without having to assume that sliding occurs uniformly, as is done in classical friction studies," Rosakis adds.

To simulate an earthquake in the lab, the researchers first cut in half a transparent block of a type of plastic known as homalite, which has similar mechanical properties to rock. They then put the two pieces together under pressure, simulating the static friction that builds up along a fault line. Next, they placed a small nickel-chromium wire fuse at the location where they wanted the epicenter of the quake to be. Triggering the fuse produced a local pressure release, which reduced friction at that location, and allowed a very fast rupture to propagate up the miniature fault.

In this study, the team recorded these simulated earthquakes using a new diagnostic method that combines high-speed photography (at 2 million frames per second) with a technique called digital image correlation, in which individual frames are compared and contrasted with one another and changes between those images—indicating motion—are tracked with sub-pixel accuracy.

"Some numerical models of earthquake rupture, including the ones developed in my group at Caltech, have used friction laws with slip-velocity dependence, based on a collection of rock mechanics experiments and theories. It is gratifying to see those formulations validated by the spontaneous mini-earthquake ruptures in our study, " Lapusta says.

In future work, the team plans to use its observations to improve the existing mathematical models about the nature of dynamic friction and to help create new ones that better represent the experimental observations; such new models would improve computer earthquake simulations.

The study is titled "Understanding dynamic friction through spontaneously evolving laboratory earthquakes." This research was supported by the National Science Foundation, the U.S. Geological Survey, and the Southern California Earthquake Center. 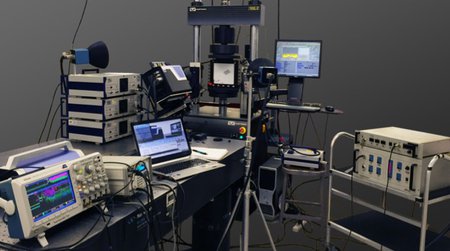 The "seismological wind tunnel" at Caltech. The white square block in the center is a plastic known as homalite that acts as an analogue for rock. It contains a miniature fault that is triggered via a nickel-chromium wire fuse to produce a tiny simulated earthquake. Credit: Courtesy of Vito Rubino
Image Lightbox 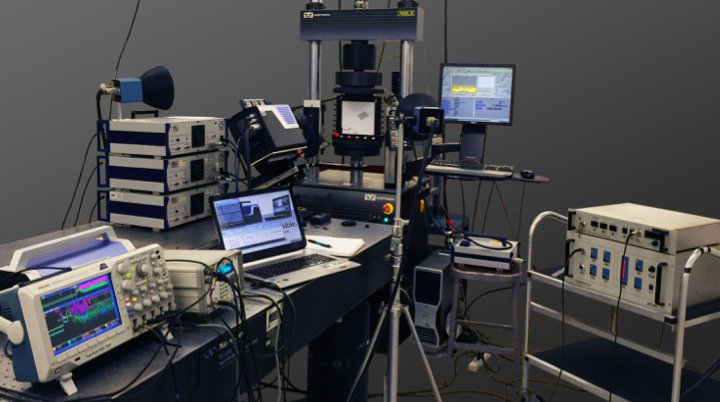 The "seismological wind tunnel" at Caltech. The white square block in the center is a plastic known as homalite that acts as an analogue for rock. It contains a miniature fault that is triggered via a nickel-chromium wire fuse to produce a tiny simulated earthquake.
Credit: Courtesy of Vito Rubino
Download Full Image
Subscribe
The Caltech Weekly