How Do You Test a Helicopter Bound for Mars?

The Ingenuity helicopter may be the first vehicle ever to fly on Mars, but Mars was not the first place it has ever flown. Before packaging it up and blasting it to the Red Planet, engineers at JPL gave the helicopter a trial run in a special wind tunnel designed with help from researchers at Caltech.

To simulate flying on a planet where the atmosphere is 100 times thinner than Earth's, a custom wind tunnel was built inside of an 85-foot-tall, 25-foot-diameter vacuum chamber at JPL, which Caltech manages for NASA. Pressure in the chamber was pumped down to approximate the Martian atmosphere, while an array of 441 pairs of individually controllable fans blew on the helicopter to simulate forward flight in the enclosed space.

The fan array was designed and built by JPL engineers with input from Caltech's Chris Dougherty (MS '16) and Marcel Veismann (MS '16), who are currently PhD students working with Mory Gharib (PhD '83), Hans W. Liepmann Professor of Aeronautics and Bioinspired Engineering and Booth-Kresa Leadership Chair of Caltech's Center for Autonomous Systems and Technologies (CAST). Dougherty and Veismann had previously overseen design and assemblage of a similar array of 1,296 pairs of fans for the Real Weather Wind Tunnel at CAST, which opened in 2017. Their design uses off-the-shelf computer cooling fans (albeit the most powerful ones currently available).

"This type of wind tunnel was particularly well suited for the intended applications, because the concept of using an array of small, cheap fans offers a space-efficient as well as cost-effective solution when compared to single-fan wind tunnels," Veismann says. "Furthermore, these types of fans are relatively robust and safe to operate, and the modularity allowed us to test how well the wall would perform prior to building the full-scale facility."

Jason Rabinovitch (MS '09, PhD '14), who was a mechanical engineer at JPL working on testing the helicopter, reached out to the CAST team in 2017. "I'd earned my PhD at GALCIT [the Graduate Aerospace Laboratories of the California Institute of Technology], so I was aware of CAST and its facilities," says Rabinovitch, who is now an assistant professor of mechanical engineering at the Stevens Institute of Technology in New Jersey.

Designing a helicopter to fly on Mars, which has lower gravity and far lower air pressure than Earth, presented a fresh set of challenges for JPL's engineers. Simply testing the helicopter required new facilities.

"Even in a big vacuum chamber, which this was, it would be impossible to free-fly forward in any meaningful way," Dougherty says. "So to test forward flight, it was either build the biggest vacuum chamber of all time, which would be time- and cost-prohibitive, or find a way to simulate the forward flight conditions of Mars in a sealed and space-confined environment. That's where our fan arrays come in."

Dougherty and Veismann designed CAST's fan array to simulate real-world terrestrial weather conditions in a partially enclosed environment, allowing researchers to test unmanned aerial vehicles under realistic conditions under Gharib's supervision. The 10-foot-by-10-foot array is housed in a three-story-tall drone arena. A computer program controls the action of more than 2,000 individual fans, allowing engineers to simulate just about any wind condition that a drone might encounter in the real world, from a light gust to a gale.

"If we want to build things that are going to operate in the real world, we need to test them in real-world conditions. That's why at CAST, we have facilities where autonomous systems face realistic challenges," says Gharib, director of CAST.

More importantly for the Mars helicopter, the fan array's software gives it the flexibility to reproducibly generate realistic turbulent flows on-demand as each fan sends and receives information on a second-by-second basis.

"We had a lot of aerodynamic questions," Rabinovitch says. "You want to understand the performance of the vehicle in a relevant environment. You want to ensure that the vehicle is stable when it flies on Mars, and that it performs as expected during a wide range of maneuvers." 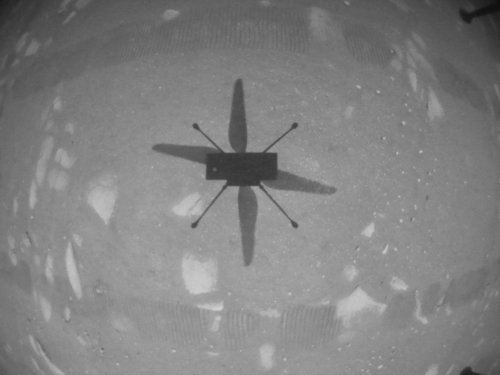 NASA's Ingenuity Mars Helicopter took this shot, capturing its own shadow, while hovering over the Martian surface on April 19, 2021, during the first instance of powered, controlled flight on another planet. Credit: NASA/JPL-Caltech
Image Lightbox 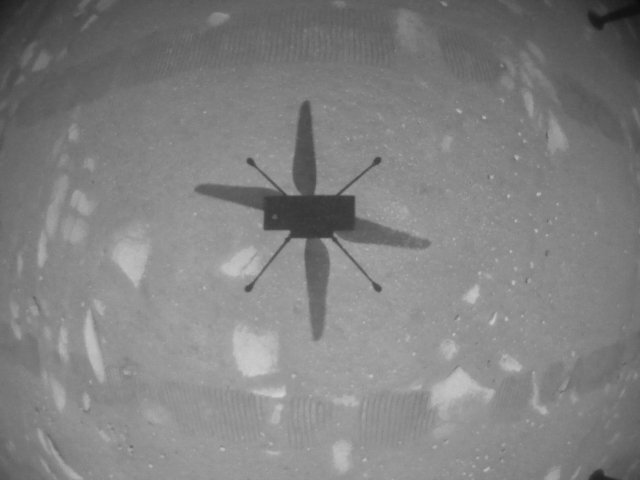 NASA's Ingenuity Mars Helicopter took this shot, capturing its own shadow, while hovering over the Martian surface on April 19, 2021, during the first instance of powered, controlled flight on another planet.
Credit: NASA/JPL-Caltech
Download Full Image

Counterintuitively, it was important for the Ingenuity test facility to be able to generate stable low-speed winds. Traditional wind tunnels, which have one giant fan, are designed to generate high-speed winds for testing aircraft that will fly at hundreds of miles per hour. The team investigated the possibility of using the Transonic Dynamics Tunnel (TDT) located at the NASA Langley Research Center, which is a wind-tunnel that is capable of producing flow conditions for testing aircraft traveling faster than the speed of sound at high altitudes on the earth. The Ingenuity helicopter, in contrast, travels at about 10 meters per second, or around 20 miles per hour.

"If we had gone to Langley, they would've had to idle their fan to get the windspeed we were looking for," says Amiee Quon, a mechanical integration engineer at JPL who helped to test the helicopter.

The JPL Mars Helicopter team secured the use of one of JPL's biggest vacuum chambers for the project. The chamber is 85 feet tall and 25 feet in diameter. It takes roughly two hours to pump out the air within to recreate the conditions of the Martian atmosphere.

Building an array of individually controllable fans inside of a vacuum chamber is not as simple as just assembling the units and turning them on. For one thing, the very nature of a vacuum chamber—the fact that it is sealed tightly—means there cannot be multiple wires running in and out. All inputs and outputs had to be streamlined and downsized

The facility itself has been important to JPL's Mars missions. "This is the chamber where we did the main thermal vacuum tests for all of the Mars rovers, which simulate space by pumping out all of the air and cycling through high and low temperatures. We had to keep it clean," Quon says. "We worried about dirt, but we also worried about off-gassing from the components on the fans." Due to contamination-control requirements, the JPL team had to rewire the fans, swapping out their stock polyvinyl chloride (PVC) wiring jackets with Teflon ones that release fewer chemical gases into the air.

"It was a lot of fun, but there were a lot of details to consider," says Quon. "We took a facility that is not designed for wind tunnel testing at all and turned it into a wind tunnel for the first time."

Because of the time required to pump down the chamber to mimic Mars's extremely low atmospheric pressure, any errors that occurred needed to be fixed remotely. For that, Dougherty and Veismann enlisted the help of Caltech Summer Undergraduate Research Fellowship (SURF) student Alejandro Stefan-Zavala.

"The type of fans that we use here have a built-in sensor that tells you how fast they are spinning, and you have to write some software to access that sensor," Stefan-Zavala says. "With 441 pairs of fans, there are a lot of sensors, and you want to know in real time what's going on so you can diagnose if something is not working properly." 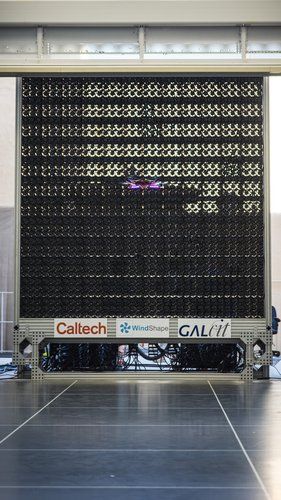 A quadrotor drone hovers in front of the wall of fans in the CAST Aerodrome.
Image Lightbox 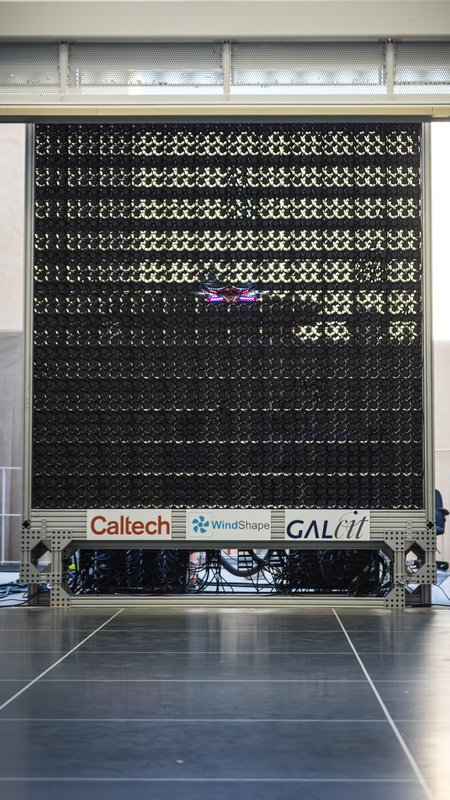 A quadrotor drone hovers in front of the wall of fans in the CAST Aerodrome.
Download Full Image

Instead, Stefan-Zavala developed custom software that remotely monitored the fans, and—if necessary—directed them to automatically reprogram themselves.

The project's feasibility study began in 2017 and testing was completed by mid-September 2018. Given the ongoing demand for the vacuum chamber to simulate the space environment—it is used as a space simulator by JPL researchers—the team had very little time to assemble the fan array, get it working, do the tests, and then break it all back down.

In the end, the fan array remained assembled for just a matter of weeks. "It was tight. We were working a lot of nights and weekends," Rabinovitch says.

Rabinovitch says that he was not surprised that the exceptional technical know-how needed to design a first-of-its-kind wind tunnel for testing a brand-new technology for Mars came from students. "These were Caltech graduate students," he says. "I wasn't surprised at that level of expertise."

Read more about the Mars Ingenuity helicopter at JPL News.