We may be capable of finding microbes in space—but if we did, could we tell what they were, and that they were alive?

This month the journal Astrobiology is publishing a special issue dedicated to the search for signs of life on Saturn's icy moon Enceladus. Included is a paper from Caltech's Jay Nadeau and colleagues offering evidence that a technique called digital holographic microscopy, which uses lasers to record 3-D images, may be our best bet for spotting extraterrestrial microbes.

No probe since NASA's Viking program in the late 1970s has explicitly searched for extraterrestrial life—that is, for actual living organisms. Rather, the focus has been on finding water. Enceladus has a lot of water—an ocean's worth, hidden beneath an icy shell that coats the entire surface. But even if life does exist there in some microbial fashion, the difficulty for scientists on Earth is identifying those microbes from 790 million miles away.

"It's harder to distinguish between a microbe and a speck of dust than you'd think," says Nadeau, research professor of medical engineering and aerospace in the Division of Engineering and Applied Science. "You have to differentiate between Brownian motion, which is the random motion of matter, and the intentional, self-directed motion of a living organism."

Enceladus is the sixth-largest moon of Saturn, and is 100,000 times less massive than Earth. As such, Enceladus has an escape velocity—the minimum speed needed for an object on the moon to escape its surface—of just 239 meters per second. That is a fraction of Earth's, which is a little over 11,000 meters per second.

Professor Jay Nadeau describes her lab's work and proposal to use new microscopes on spacecraft that could visit the icy moons of Enceladus (Saturn) and Europa (Jupiter) and to collect and search water samples for life.

Enceladus's minuscule escape velocity allows for an unusual phenomenon: enormous geysers, venting water vapor through cracks in the moon's icy shell, regularly jet out into space. When the Saturn probe Cassini flew by Enceladus in 2005, it spotted water vapor plumes in the south polar region blasting icy particles at nearly 2,000 kilometers per hour to an altitude of nearly 500 kilometers above the surface. Scientists calculated that as much as 250 kilograms of water vapor were released every second in each plume. Since those first observations, more than a hundred geysers have been spotted. This water is thought to replenish Saturn's diaphanous E ring, which would otherwise dissipate quickly, and was the subject of a recent announcement by NASA describing Enceladus as an "ocean world" that is the closest NASA has come to finding a place with the necessary ingredients for habitability.

Water blasting out into space offers a rare opportunity, says Nadeau. While landing on a foreign body is difficult and costly, a cheaper and easier option might be to send a probe to Enceladus and pass it through the jets, where it would collect water samples that could possibly contain microbes.

Assuming a probe were to do so, it would open up a few questions for engineers like Nadeau, who studies microbes in extreme environments. Could microbes survive a journey in one of those jets? If so, how could a probe collect samples without destroying those microbes? And if samples are collected, how could they be identified as living cells?

The problem with searching for microbes in a sample of water is that they can be difficult to identify. "The hardest thing about bacteria is that they just don't have a lot of cellular features," Nadeau says. Bacteria are usually blob-shaped and always tiny—smaller in diameter than a strand of hair. "Sometimes telling the difference between them and sand grains is very difficult," Nadeau says.

Some strategies for demonstrating that a microscopic speck is actually a living microbe involve searching for patterns in its structure or studying its specific chemical composition. While these methods are useful, they should be used in conjunction with direct observations of potential microbes, Nadeau says.

"Looking at patterns and chemistry is useful, but I think we need to take a step back and look for more general characteristics of living things, like the presence of motion. That is, if you see an E. coli, you know that it is alive—and not, say, a grain of sand—because of the way it is moving," she says. In earlier work, Nadeau suggested that the movement exhibited by many living organisms could potentially be used as a robust, chemistry-independent biosignature for extraterrestrial life. The motion of living organisms can also be triggered or enhanced by "feeding" the microbes electrons and watching them grow more active.

To study the motion of potential microbes from Enceladus's plumes, Nadeau proposes using an instrument called a digital holographic microscope that has been modified specifically for astrobiology.

In digital holographic microscopy, an object is illuminated with a laser and the light that bounces off the object and back to a detector is measured. This scattered light contains information about the amplitude (the intensity) of the scattered light, and about its phase (a separate property that can be used to tell how far the light traveled after it scattered). With the two types of information, a computer can reconstruct a 3-D image of the object—one that can show motion through all three dimensions.

"Digital holographic microscopy allows you to see and track even the tiniest of motions," Nadeau says. Furthermore, by tagging potential microbes with fluorescent dyes that bind to broad classes of molecules that are likely to be indicators of life—proteins, sugars, lipids, and nucleic acids—"you can tell what the microbes are made of," she says.

To study the technology's potential utility for analyzing extraterrestrial samples, Nadeau and her colleagues obtained samples of frigid water from the Arctic, which is sparsely populated with bacteria; those that are present are rendered sluggish by the cold temperatures.

With holographic microscopy, Nadeau was able to identify organisms with population densities of just 1,000 cells per milliliter of volume, similar to what exists in some of the most extreme environments on Earth, such as subglacial lakes.  For comparison, the open ocean contains about 10,000 cells per milliliter and a typical pond might have 1–10 million cells per milliliter. That low threshold for detection, coupled with the system's ability to test a lot of samples quickly (at a rate of about one milliliter per hour) and its few moving parts, makes it ideal for astrobiology, Nadeau says.

Next, the team will attempt to replicate their results using samples from other microbe-poor regions on Earth, such as Antarctica. 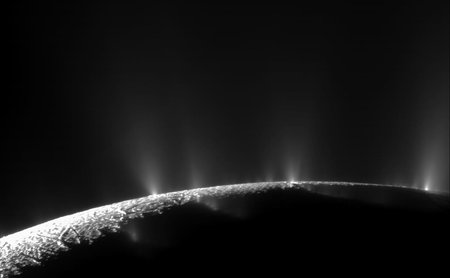 Plumes water ice and vapor spray from many locations near the south pole of Saturn's moon Enceladus, as documented by the Cassini-Huygens mission. Credit: NASA/JPL/Space Science Institute
Image Lightbox 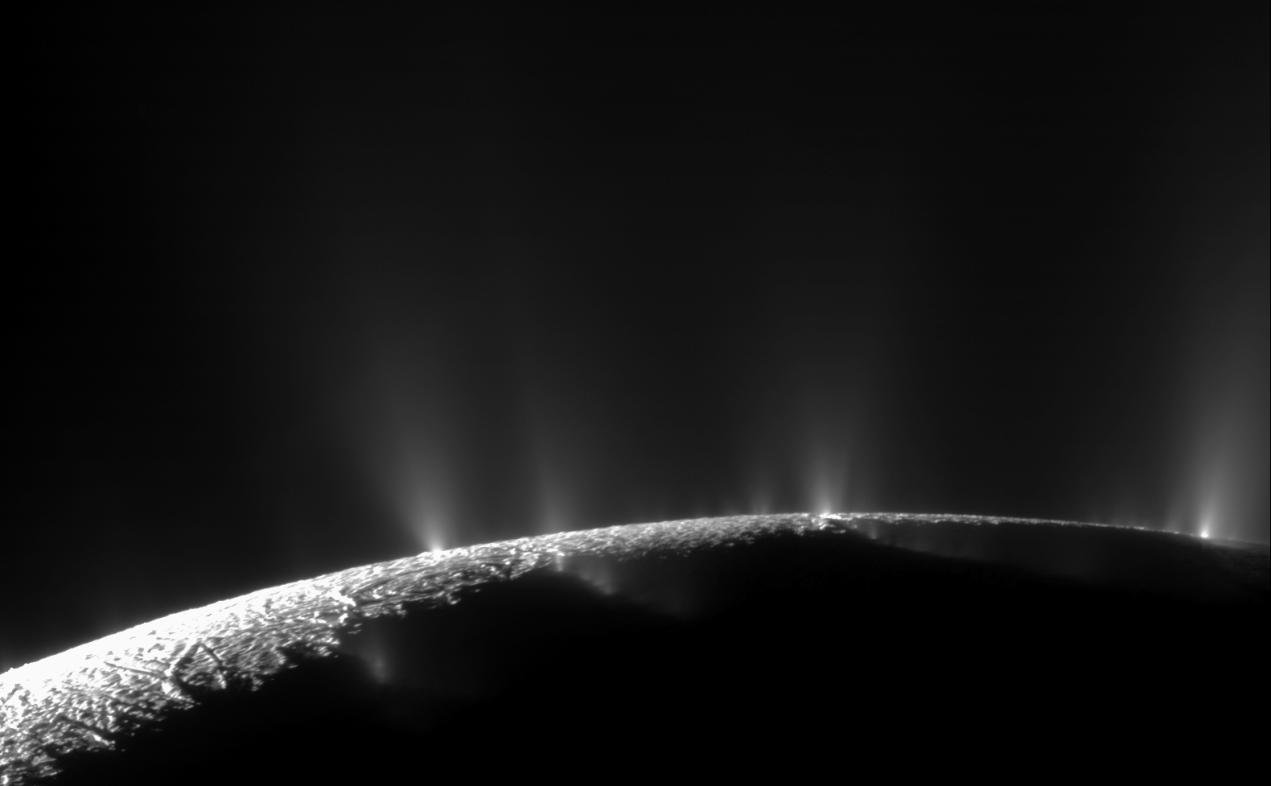 Share this
Tags
biological science & medicine earth & planetary science engineering interdisciplinary research
Related Links
> VIDEO: Gearing up to search for life on Enceladus   > Building a Microscope to Search for Signs of Life on Other Worlds
See All News   >