This event—which could raise surface temperatures by about 8 Kelvin (14 degrees Fahrenheit) globally—may occur at CO2 concentrations above 1,200 parts per million (ppm), according to the study, which was published in Nature Geoscience on February 25. For reference, the current concentration is around 410 ppm and rising. If the world continues burning fossil fuels at the current rate, Earth's CO2 level could rise above 1,200 ppm in the next century.

"I think and hope that technological changes will slow carbon emissions so that we do not actually reach such high CO2 concentrations. But our results show that there are dangerous climate change thresholds that we had been unaware of," says Caltech's Tapio Schneider, Theodore Y. Wu Professor of Environmental Science and Engineering and senior research scientist at the Jet Propulsion Laboratory, which Caltech manages for NASA. Schneider, the lead author of the study, notes that the 1,200-ppm threshold is a rough estimate rather than a firm number.

The study could help solve a longstanding mystery in paleoclimatology. Geological records indicate that during the Eocene (around 50 million years ago), the Arctic was frost free and home to crocodiles. However, according to existing climate models, CO2 levels would need to rise above 4,000 ppm to heat the planet enough for the Arctic to be that warm. This is more than twice as high as the likely CO2 concentration during this time period. However, a warming spike caused by the loss of stratus cloud decks could explain the appearance of the Eocene's hothouse climate.

Stratus cloud decks cover about 20 percent of subtropical oceans and are prevalent in the eastern portions of those oceans—for example, off the coasts of California or Peru. The clouds cool and shade the earth as they reflect the sunlight that hits them back into space. That makes them important for regulating Earth's surface temperature. The problem is that the turbulent air motions that sustain these clouds are too small to be resolvable in global climate models.

To circumvent the inability to resolve the clouds at a global scale, Schneider and his co-authors, Colleen Kaul and Kyle Pressel of the Pacific Northwest National Laboratory, created a small-scale model of a representative atmospheric section above a subtropical ocean, simulating the clouds and their turbulent motions over this ocean patch on supercomputers. They observed instability of the cloud decks followed by a spike in warming when CO2 levels exceeded 1,200 ppm. The researchers also found that once the cloud decks vanished, they did not reappear until CO2 levels dropped to levels substantially below where the instability first occurred.

"This research points to a blind spot in climate modeling," says Schneider, who is currently leading a consortium called the Climate Modeling Alliance (CliMA) in an effort to build a new climate model. CliMA will use data assimilation and machine-learning tools to fuse Earth observations and high-resolution simulations into a model that represents clouds and other important small-scale features better than existing models. One use of the new model will be to determine more precisely the CO2 level at which the instability of the cloud decks occurs.

The new paper is titled "Possible climate transitions from breakup of stratocumulus decks under greenhouse warming." Kaul and Pressel completed this work as research scientists in Schneider's lab. This research was supported by Caltech senior trustee Charles Trimble (BS '63, MS '64) and the GPS Chair's Council. 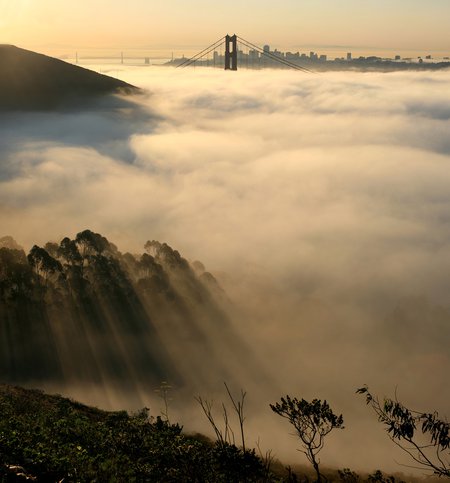