Warm, protected, and full of nutrients—the tiny intestines of a fruit fly are a perfect habitat for some bacteria. These bacteria, in turn, help the fly break down and digest food, keeping the insect's metabolism running smoothly. Now, Caltech researchers have shown that gut bacteria's influence on their hosts is not confined to metabolism—they also influence the fly's locomotion and movement. This work is the first to discover a direct molecular and cellular link between the microbiome and locomotion.

The work was done in the laboratory of Sarkis Mazmanian, the Luis B. and Nelly Soux Professor of Microbiology, a Heritage Medical Research Institute Investigator, and an affiliated faculty member of the Tianqiao and Chrissy Chen Institute for Neuroscience at Caltech. A paper describing the research will appear online in the journal Nature on October 24.

More than 80 percent of the food we eat is broken down by our microbiome—the communities of bacteria that live in our intestines, or gut. The microbiome regulates the levels and ratios of thousands of different nutrient molecules, used for essentially all biological functions. The Mazmanian laboratory studies how the gut microbiome influences these processes and organs throughout whole organisms.

Led by former graduate student Catherine Schretter, a team of Caltech researchers set out to study Drosophila (fruit flies) to determine what, if any, effect the gut microbiome had on a particular fundamental behavior: locomotion. Schretter, now a postdoctoral scholar at Howard Hughes Medical Institute's Janelia Research Campus, performed the work for her doctoral thesis, which she defended in August 2018; she will officially receive her degree in 2019.

First, the researchers compared conventional flies with a normal gut microbiome to flies that were axenic, or lacking any bacteria in their gut. The axenic flies exhibited increased locomotion, walking around hyperactively, similar to how starving flies behave when they are searching for food. The team discovered that specific bacteria, including Lactobacillus brevis and Escherichia coli, restored the fly's locomotion to normal levels.

But how does an enzyme in the gut affect a fly's motor movements, which are generally considered to be controlled by neurons and muscles? The team found that the effects of xylose isomerase were negated by either removal of a neurochemical called octopamine or the silencing of octopaminergic neurons (neurons that produce octopamine), suggesting that both are involved in the mediation of the effects of xylose isomerase on movement. For example, if there is too much activation of octopaminergic neurons—which are known to be involved in both movement and metabolism—a fly will be hyperactive.

Though the exact mechanism through which xylose isomerase affects these neurons remains to be determined, the new work strongly points to the existence of a link between the microbiome and neural control of locomotion.

"It's not surprising that an enzyme involved in sugar metabolism is linked to locomotion, because both metabolism and locomotion are so fundamental for foraging, mating, evading predators, and other key behaviors. Our work supports this connection," says Schretter. "This work illustrates how different organs can have a system-wide effect on the whole organism. For us, it was about shifting our thinking from a focus on individual organs to a full, holistic view."

"We know that what we eat affects our behavior. For example, sugar gives us quick bursts of energy," says Mazmanian. "But I think the link we have showed between metabolism and locomotion is likely much more fundamental than a sugar rush. Our work suggests that gut bacteria are necessary to tune the overall health status of the animal, its homeostasis."

Though the discovery was made in simple fruit flies, it suggests directions for further studies to be done in more complex animals, such as mice.

"There are studies that show that mice without microbiomes behave hyperactively," says Mazmanian. "The neurons that respond to xylose isomerase in flies, the octopamine neurons, are not directly found in mammals, but mice do have a similar counterpart to octopamine, namely noradrenaline. This work sets the stage for hypotheses and targets to be tested in mammalian systems. Additionally, because our laboratory studies Parkinson's disease, where patients have motor symptoms, we are very interested in neurological pathways linking the gut and the brain as potential targets for new drugs. While we are still far from this reality, the current study provides conceptual support that the microbiome may modulate locomotion in mammals."

The paper is titled, "A gut microbial factor modulates locomotor behavior in Drosophila." In addition to Schretter and Mazmanian, co-authors are Jost Vielmetter, director of the Protein Expression Center at Caltech's Beckman Institute; Imre Bartos, Zsuzsa Marka, and Szabolcs Marka of Columbia University; and Sulabha Argade of UC San Diego. Funding was provided by Caltech's Center for Environmental Microbial Interactions, the National Institutes of Health, and the Heritage Medical Research Institute. 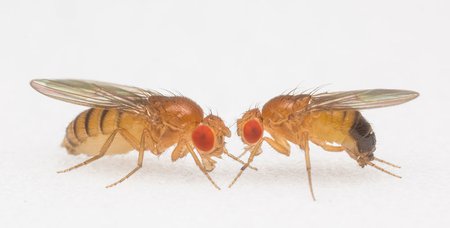 A female fly, lacking a microbiome, tracked using the Caltech FlyTracker software. This experimental setup allowed researchers to compare the locomotive behavior of flies with and without bacteria residing in their guts. Credit: Courtesy of the Mazmanian laboratory
Image Gallery Lightbox 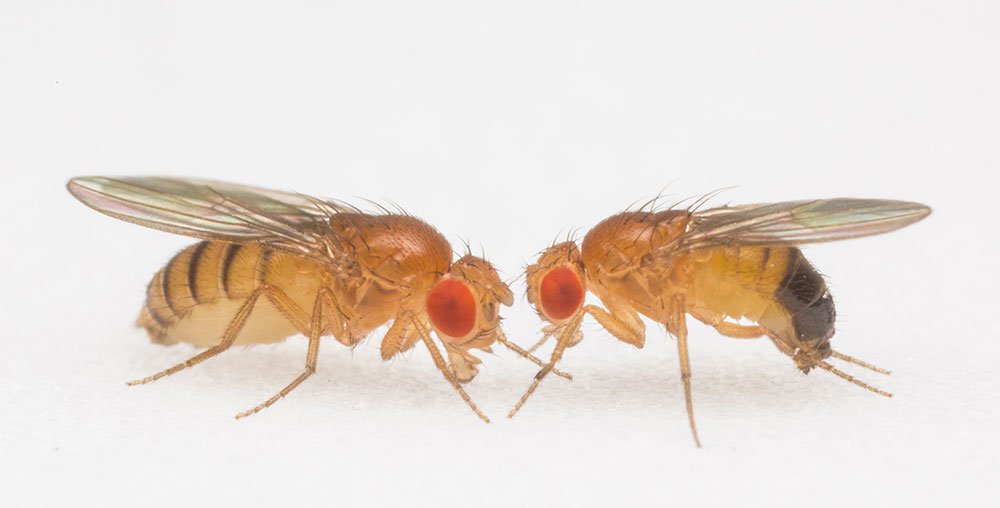 A female fly, lacking a microbiome, tracked using the Caltech FlyTracker software. This experimental setup allowed researchers to compare the locomotive behavior of flies with and without bacteria residing in their guts.
Credit: Courtesy of the Mazmanian laboratory
Download Full Image