PASADENA, Calif.--The surface landscape of Mars, divided into lowlands in the north and highlands in the south, has long perplexed planetary scientists. Was it sculpted by several small impacts, via mantle convection in the planet's interior, or by one giant impact? Now scientists at the California Institute of Technology have shown through computer modeling that the Mars dichotomy, as the divided terrain has been termed, can indeed be explained by one giant impact early in the planet's history.

"The dichotomy is arguably the oldest feature on Mars," notes Oded Aharonson, associate professor of planetary science at Caltech and an author of the study. The feature arose more than four billion years ago, before the rest of the planet's complex geologic history was superimposed.

Scientists had previously discounted the idea that a single, giant impactor could have created the lower elevations and thinner crust of Mars's northern region, says Margarita Marinova, a graduate student in Caltech's Division of Geological and Planetary Sciences (GPS) and lead author of the study, which appears June 26 in the journal Nature. This special issue of the journal features a trio of papers on the Mars dichotomy.

For one thing, Marinova explains, it was thought that a single impact would leave a circular footprint, but the outline of the northern lowlands region is elliptical. There is also a distinct lack of a crater rim: topography increases smoothly from the lowlands to the highlands without a lip of concentrated material in between, as is the case in small craters. Finally, it was believed that a giant impactor would obliterate the record of its own occurrence by melting a large fraction of the planet and forming a magma ocean.

"We set out to show that it's possible to make a big hole without melting the majority of the surface of Mars," Aharonson says. The team modeled a range of projectile parameters that could yield a cavity the size and ellipticity of the Mars lowlands without melting the whole planet or making a crater rim.

After cranking 500 simulations combining various energies, velocities, and impact angles through the GPS division's Beowulf-class computer cluster CITerra, the researchers narrowed in on a "sweet spot"--a range of single-impact parameters that would make exactly the type of crater found on Mars. Although a large impact had been suggested (and discounted) in the past, Aharonson says, computers weren't fast enough to run the models. "The ability to search for parameters that allow an impact compatible with observations is enabled by the dedicated machine at Caltech," he adds.

The favored simulation conditions outlined by the sweet spot suggest an impact energy of around 10 to the 29 joules, which is equivalent to 100 billion gigatons of TNT. The impactor would have hit Mars at an angle between 30 and 60 degrees while traveling at 6 to 10 kilometers per second. By combining these factors, Marinova calculated that the projectile was roughly 1,600 to 2,700 kilometers across.

Estimates of the energy of the Mars impact place it squarely between the impact that is thought to have led to the extinction of dinosaurs on Earth 65 million years ago and the one believed to have extruded our planet's moon four billion years ago.

Indeed, the timing of formation of our moon and the Mars dichotomy is not coincidental, Marinova notes. "This size range of impacts only occurred early in solar system history," she says. The results of this study are also applicable to understanding large impact events on other heavenly bodies, like the Aitken Basin on the moon and the Caloris Basin on Mercury.

The Caltech study comes at a time of renewed interest in the ancient crustal feature on Mars, Aharonson notes. Also in this issue of Nature, Jeffrey Andrews-Hanna and Maria Zuber of MIT and Bruce Banerdt of JPL examine the gravitational and topographic signature of the dichotomy with information from the Mars orbiters. Another accompanying report, from a group at UC Santa Cruz led by Francis Nimmo, explores the expected consequences of mega-impacts.

The other author on this study is Erik Asphaug, a professor of earth and planetary sciences at UC Santa Cruz. 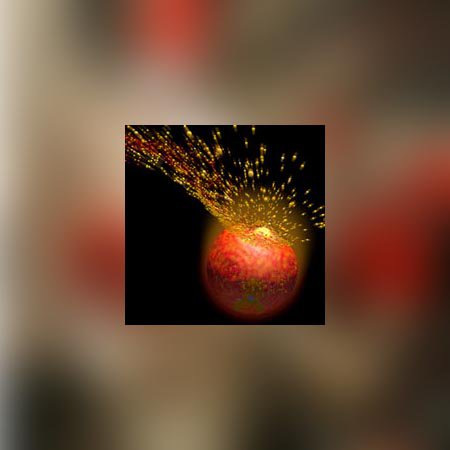