Getting the Lead Out

Caltech geochemist Clair Patterson (1922–1995) helped galvanize the environmental movement 50 years ago when he announced that highly toxic lead could be found essentially everywhere on Earth, including in our own bodies—and that very little of it was due to natural causes.

In a paper published in the September 1965 issue of Archives of Environmental Health, Patterson challenged the prevailing belief that industrial and natural sources contributed roughly equal amounts of ingestible lead, and that the aggregate level we absorbed was safe. Instead, he wrote, "A new approach to this matter suggests that the average resident of the United States is being subjected to severe chronic lead insult." He estimated that our "lead burden" was as much as 100 times that of our preindustrial ancestors—often to just below the threshold of acute toxicity.

Lead poisoning was known to the ancients. Vitruvius, designer of aqueducts for Julius Caesar, wrote in Book VIII of De Architectura that "water is much more wholesome from earthenware pipes than from lead pipes . . . [water] seems to be made injurious by lead." Lead accumulates in the body, where it can have profound effects on the central nervous system. Children exposed to high lead levels often acquire permanent learning disabilities and behavioral disorders.

When Patterson arrived at Caltech as a research fellow in geochemistry in 1952, he was looking not to save the world but to figure out how old it was. Doing so required him to measure the precise amounts of various isotopes of uranium and lead. (Isotopes are atoms of the same element that contain different numbers of neutrons in their nuclei.) Uranium-238 decays very, very slowly into lead-206, while uranium-235 decays less slowly into lead-207. Both rates are well known, so measuring the ratios of lead atoms to uranium ones shows how much uranium has disappeared and allows the sample's age to be calculated.

Patterson presumed that the inner solar system's rocky planets and meteorites had all coalesced at the same time, and that the meteorites had survived essentially unchanged ever since. Using an instrument called a mass spectrometer and working in a clean room he had designed and built himself, Patterson counted the individual lead atoms in a meteorite sample recovered from Canyon Diablo near Meteor Crater, Arizona. In a landmark paper published in 1956, he established Earth's age as 4.55 billion years.

However, there are four common isotopes of lead, and Patterson had to take them all into account in his calculations. He had announced his findings at a conference in 1955, and he had continued to refine his results as the paper worked its way through the review process. But there he hit a snag—his analytical skills had become so finely honed that he was finding lead everywhere. He needed to know the source of this contamination in order to eliminate it, and he took it on himself to find out.

Patterson's 1965 Environmental Health paper summarized that work. With M. Tatsumoto of the U.S. Geological Survey, he found that the ocean off of southern California was lead-laden at the surface but that the contamination disappeared rapidly with depth. They concluded that the likely culprit was tetraethyl lead, a widespread gasoline additive that emerged from the tailpipe of automobiles as very fine lead particles. Patterson and research fellow T. J. Chow crisscrossed the Pacific aboard research vessels run by the Scripps Institution of Oceanography at UC San Diego and found the same profile of lead levels versus depth. Then, in the winter of 1962–63, Patterson and Tatsumoto collected snow at an altitude of 7,000 feet on Mount Lassen in northern California. The lead contamination there was 10 to 100 times worse than at sea. Patterson concluded that it had fallen from the skies. Its isotopic fingerprint was a perfect match for air samples from Los Angeles—located 500 miles to the south. It also matched gasoline samples obtained by Chow in San Diego. Furthermore, the isotope fingerprint was different from that of lead found in prehistoric sediments off the California coast.

"The atmosphere of the northern hemisphere contains about 1,000 times more than natural amounts of lead," Patterson wrote, and he called for the "elimination of some of the most serious sources of lead pollution such as lead alkyls [i.e., tetraethyl lead], insecticides, food can solder, water service pipes, kitchenware glazes, and paints; and a reevaluation by persons in positions of responsibility in the field of public health of their role in the matter."

Patterson's paper was his first shot in the war against lead pollution, bureaucratic inertia, and big business that he would wage for the rest of his life. He won: the Clean Air Act of 1970 authorized the development of national air-quality standards, including emission controls on cars. In 1976, the Environmental Protection Agency reported that more than 100,000 tons of lead went into gasoline every month; by 1980 that figure would be less than 50,000 tons, and the concentration of lead in the average American's blood would drop by nearly 50 percent as well. The Consumer Product Safety Commission would ban lead-based indoor house paints in 1977 (flakes containing brightly colored lead pigments often found their way into children's mouths). And in 1986, the EPA prohibited tetraethyl lead in gasoline. 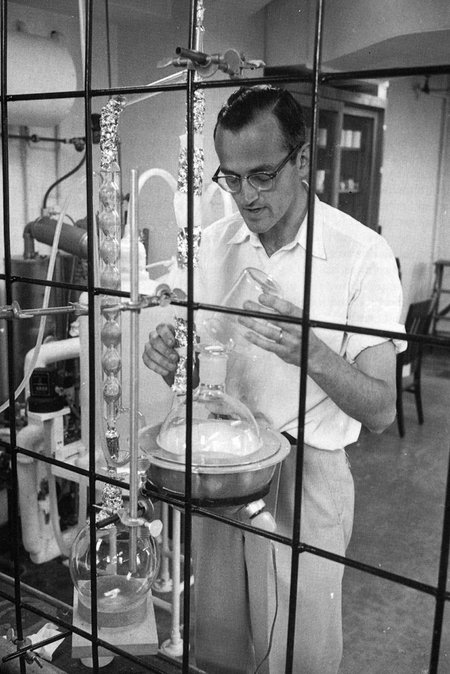 In his sleuthing for trace amounts of lead, Caltech geochemist Clair Patterson redistills a reagent in this 1957 photograph. He didn't trust the purity of commercial chemicals. Credit: Caltech E&S Magazine, Volume 60, Number 1, 1997 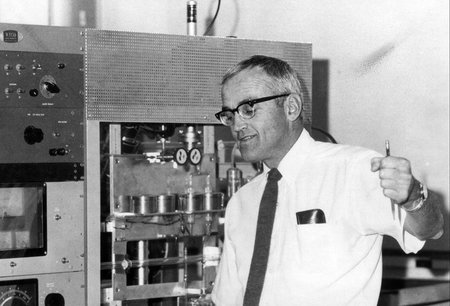 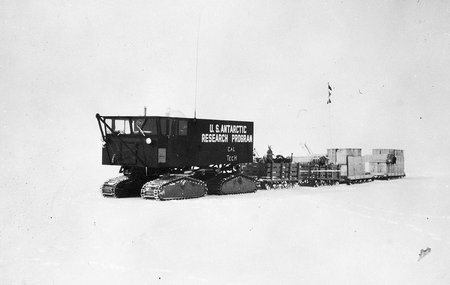 In 1966, the year after his paper was published, Patterson joined an expedition to Antarctica to see if lead pollution had made its way to the ends of the earth. It had. Credit: Caltech Archives
Image Gallery Lightbox 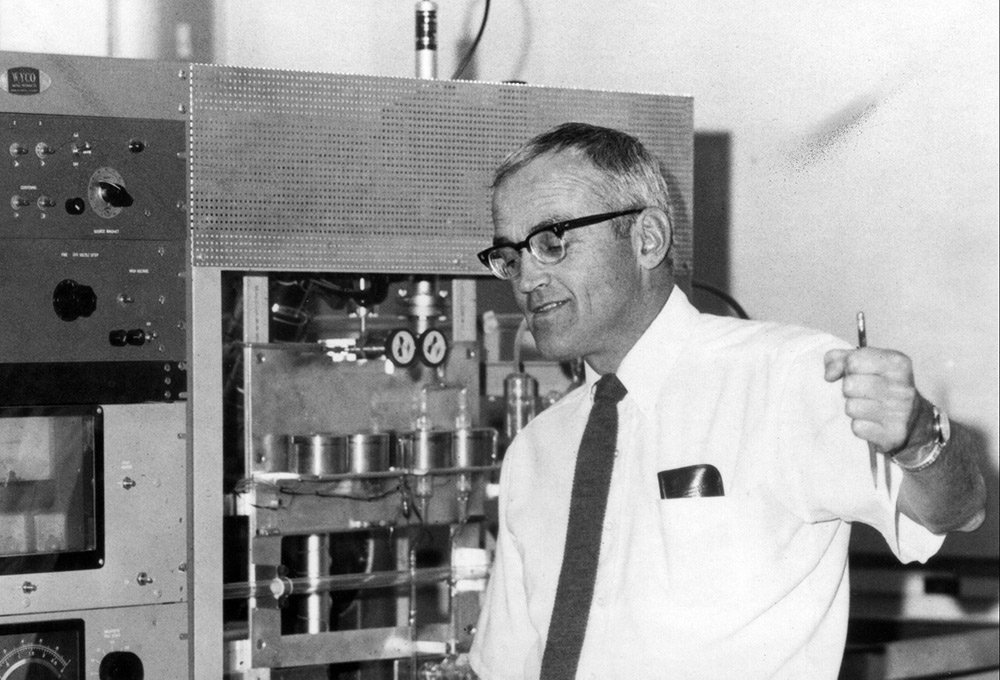 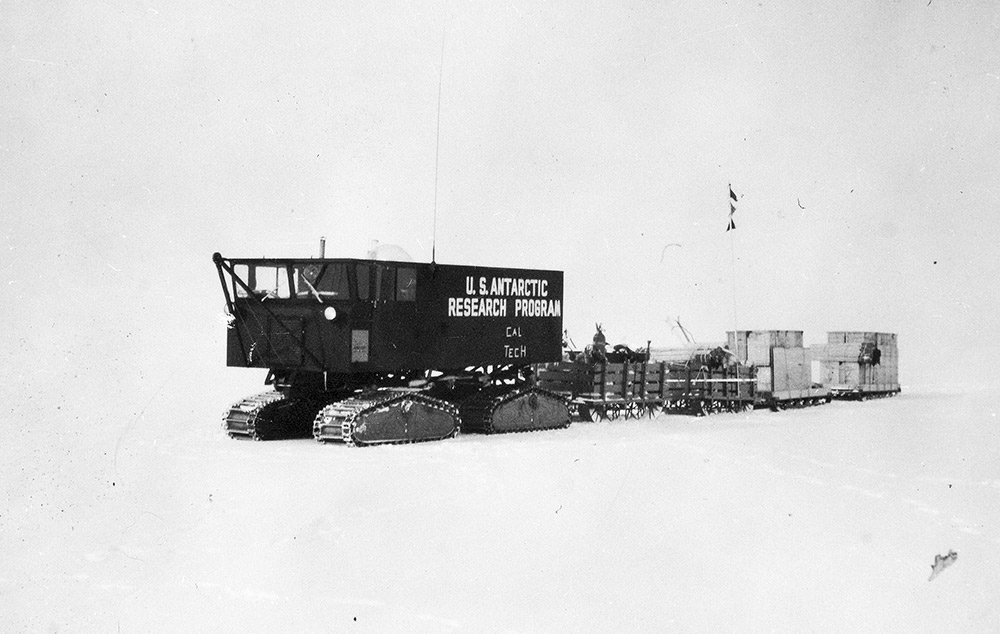 In 1966, the year after his paper was published, Patterson joined an expedition to Antarctica to see if lead pollution had made its way to the ends of the earth. It had.
Credit: Caltech Archives
Download Full Image