Getting To Know Super-Earths

"If you have a coin and flip it just once, what does that tell you about the odds of heads versus tails?" asks Heather Knutson, assistant professor of planetary science at Caltech. "It tells you almost nothing. It's the same with planetary systems," she says.

For as long as astronomers have been looking to the skies, we have had just one planetary system—our own—to study in depth. That means we have only gotten to know a handful of possible outcomes of the planet formation process, and we cannot say much about whether the features observed in our solar system are common or rare when compared to planetary systems orbiting other stars.

That is beginning to change. NASA's Kepler spacecraft, which launched on a planet-hunting mission in 2009, searched one small patch of the sky and identified more than 4,000 candidate exoplanets—worlds orbiting stars other than our own sun. It was the first survey to provide a definitive look at the relative frequency of planets as a function of size. That is, to ask, 'How common are gas giant planets, like Jupiter, compared to planets that look a lot more like Earth?'

Kepler's results suggest that small planets are much more common than big ones. Interestingly, the most common planets are those that are just a bit larger than Earth but smaller than Neptune—the so-called super-Earths.

However, despite being common in our local corner of the galaxy, there are no examples of super-Earths in our own solar system. Our current observations tell us something about the sizes and orbits of these newly discovered worlds, but we have very little insight into their compositions.

"We are left with this situation where super-Earths appear to be the most common kind of exoplanet in the galaxy, but we don't know what they're made of," says Knutson.

There are a number of possibilities. A super-Earth could be just that: a bigger version of Earth—mostly rocky, with an atmosphere. Then again, it could be a mini-Neptune, with a large rock-ice core encapsulated in a thick envelope of hydrogen and helium. Or it could be a water world—a rocky core enveloped in a blanket of water and perhaps an atmosphere composed of steam (depending on the temperature of the planet).

"It's really interesting to think about these planets because they could have so many different compositions, and knowing their composition will tell us a lot about how planets form," Knutson says. For example, because planets in this size range acquire most of their mass by pulling in and incorporating solid material, water worlds initially must have formed far away from their parent stars, where temperatures were cold enough for water to freeze. Most of the super-Earths known today orbit very close to their host stars. If water-dominated super-Earths turn out to be common, it would indicate that most of these worlds did not form in their present locations but instead migrated in from more distant orbits.

In addition to thinking about exoplanets, Knutson and her students use space-based observatories like the Hubble and Spitzer Space Telescopes to learn more about the distant worlds. For example, the researchers analyze the starlight that filters through a planet's atmosphere as it passes in front of its star to learn about the composition of the atmosphere. Molecular species present in the planet's atmosphere absorb light at particular wavelengths. Therefore, by using Hubble and Spitzer to view the planet and its atmosphere at a number of different wavelengths, the researchers can determine which chemical compounds are present.

To date, nearly two dozen planets have been characterized with this technique. These observations have shown that the enormous gas giant exoplanets known as hot-Jupiters have water, carbon monoxide, hydrogen, helium—and potentially carbon dioxide and methane—in their atmospheres.

However, right now super-Earths are the hot topic. Unfortunately, although hundreds of super-Earths have been found, only a few are close enough and orbiting bright enough stars for astronomers to study in this way using currently available telescopes.

The first super-Earth that the astronomical community targeted for atmospheric studies was GJ 1214b, in the constellation Ophiuchus. Based on its average density (determined from its mass and radius), it was clear from the start that the planet was not entirely rocky. However, its density could be equally well matched by either a primarily water composition or a Neptune-like composition with a rocky core surrounded by a thick gas envelope. Information about the atmosphere could help astronomers determine which one it was: a mini-Neptune's atmosphere should contain lots of molecular hydrogen, while a water world's atmosphere should be water dominated.

GJ 1214b has been a popular target for the Hubble Space Telescope since its discovery in 2009. Disappointingly, after a first Hubble campaign led by researchers at the Harvard-Smithsonian Center for Astrophysics, the spectrum came back featureless—there were no chemical signatures in the atmosphere. After a second set of more sensitive observations led by researchers at the University of Chicago returned the same result, it became clear that a high cloud deck must be masking the signature of absorption from the planet's atmosphere.

"It's exciting to know that there are clouds on the planet, but the clouds are getting in the way of what we actually wanted to know, which is what is this super-Earth made of?" explains Knutson.

Now Knutson's team has studied a second super-Earth: HD 97658b, in the constellation Leo. They report their findings in the current issue of The Astrophysical Journal. The researchers used Hubble to measure the decrease in light when the planet passed in front of its parent star over a range of infrared wavelengths in order to detect small changes caused by water vapor in the planet's atmosphere.

However, again the data came back featureless. One explanation is that HD 97658b is also enveloped in clouds. However, Knutson says, it is also possible that the planet has an atmosphere that is lacking hydrogen. Because such an atmosphere could be very compact, it would make the telltale fingerprints of water vapor and other molecules very small and hard to detect. "Our data are not precise enough to tell whether it's clouds or the absence of hydrogen in the atmosphere that's causing the spectrum to be flat," she says. "This was just a quick first look to give us a rough idea of what the atmosphere looked like. Over the next year, we will use Hubble to observe this planet again in more detail. We hope those observations will provide a clear answer to the current mystery."

It appears that clouds are going to continue to pose a real challenge in studies of super-Earths, so Knutson and other researchers are working to understand the composition of the clouds around these planets and the conditions under which they form. The hope is that they will get to the point where they can predict which worlds will be shrouded in clouds. "If we can then target planets that we think should be cloud-free, that will help us make optimal use of Hubble's time," she says.

Looking to the future, Knutson says there is only one more known super-Earth that can be targeted for atmospheric studies with current telescopes. But new surveys, such as NASA's extended Kepler K2 mission and the Transiting Exoplanet Survey Satellite (TESS), slated for launch in 2017, should identify a large sample of new targets.

Of course, she says, astronomers would love to study exoplanets the size of Earth, but these worlds are just a bit too small and too difficult to observe with Hubble and Spitzer. NASA's James Webb Space Telescope, which is scheduled for launch in 2018, will provide the first opportunity to study more Earth-like worlds. "Super-Earths are at the edge of what we can study right now," Knutson says. "But super-Earths are a good consolation prize—they're interesting in their own right, and they give us a chance to explore new kinds of worlds with no analog in our own solar system." 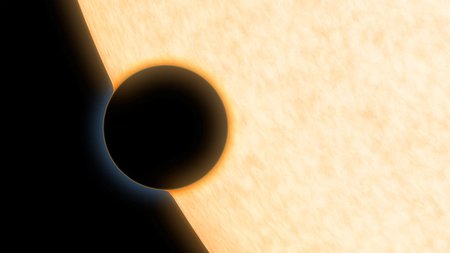 This is an artist's concept of the silhouette of the extrasolar planet HAT-P-11b as it passes its parent star. Credit: NASA/JPL-Caltech
Image Lightbox 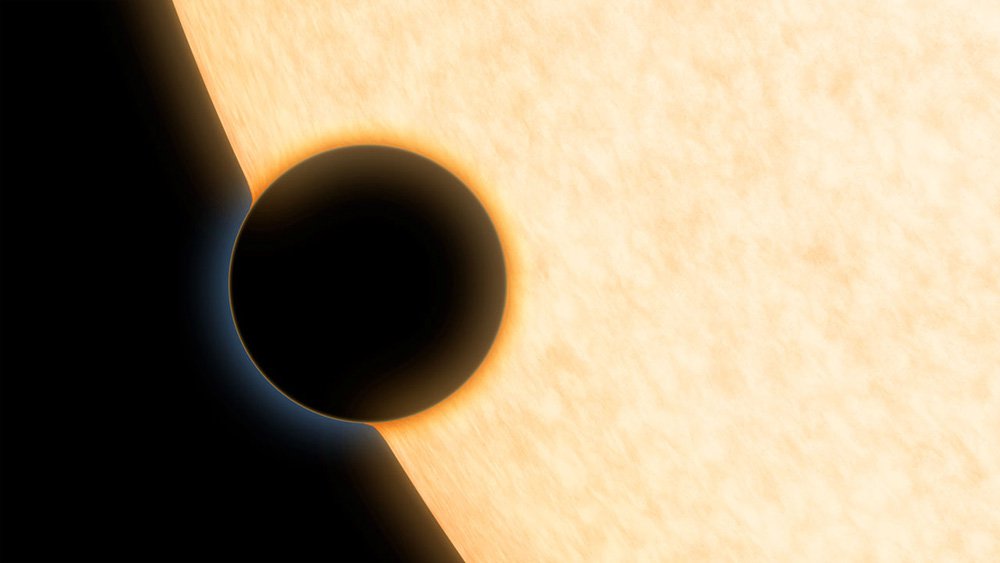 This is an artist's concept of the silhouette of the extrasolar planet HAT-P-11b as it passes its parent star.
Credit: NASA/JPL-Caltech
Download Full Image
Subscribe
The Caltech Weekly