LONG BEACH--Geologists report new evidence for a fault beneath Los Angeles that could cause damaging earthquakes in the future.

According to Michael Oskin, a graduate student at the California Institute of Technology (Caltech), the new study concerns an 11-mile-long, previously known geologic fold that runs through the hills north and east of Downtown Los Angeles. This fold provides indirect evidence for an underlying fault.

"Our evidence from the surface is that the fold is still growing," says Oskin. "This indicates that the fault that lies beneath it must also be active."

The fold, first associated with earthquakes at the time of the Whittier Narrows Earthquake, in 1987, is formally known as the Elysian Park Anticlinorium and runs northwest-southeast from Hollywood to Whittier Narrows. Three smaller "wrinkles" formed upon the southwest-facing flank of this fold have been investigated in detail by the Caltech scientists.

Their studies of sediment deposited by the Los Angeles River and its tributaries indicate that these small folds have been active during the past 60,000 years. During that time, the area has been contracting north-south at a rate of at least a half-millimeter per year.

"Our evidence that this structure is active does not increase the overall hazard in the metropolitan region," says coauthor Kerry Sieh, a professor of geology at Caltech. "Rather, it allows us to be more specific about how, where, and how fast deformation is occurring in the area.

The length of the surface features suggests that the underlying fault is about 11 miles in length and may extend 10 or so miles into the earth. Such a fault, if it ruptured all at once, could produce a 6.5- to 6.8-magnitude earthquake.

The rate of deformation suggests that such events might occur, on average, about once every one to three thousand years.

Oskin and Sieh reported on their work at the Geological Society of America meeting in Long Beach April 7, 1998. 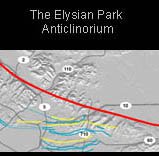