Capitalizing on a new insight into HIV's strategy for evading antibodies—proteins produced by the immune system to identify and wipe out invading objects such as viruses—Caltech researchers have developed antibody-based molecules that are more than 100 times better than our bodies' own defenses at binding to and neutralizing HIV, when tested in vitro. The work suggests a novel approach that could be used to engineer more effective HIV-fighting drugs.

"Based on the work that we have done, we now think we know how to make a really potent therapeutic that would not only work at relatively low concentrations but would also force the virus to mutate along pathways that would make it less fit and therefore more susceptible to elimination," says Pamela Bjorkman, the Max Delbrück Professor of Biology and an investigator with the Howard Hughes Medical Institute. "If you were able to give this to someone who already had HIV, you might even be able to clear the infection."

The researchers describe the work in the January 29 issue of Cell. Rachel Galimidi, a graduate student in Bjorkman's lab at Caltech, is lead author on the paper.

The researchers hypothesized that one of the reasons the immune system is less effective against HIV than other viruses involves the small number and low density of spikes on HIV's surface. These spikes, each one a cluster of three protein subunits, stick up from the surface of the virus and are the targets of antibodies that neutralize HIV. While most viruses are covered with hundreds of these spikes, HIV has only 10 to 20, making the average distance between the spikes quite long.

That distance is important with respect to the mechanism that naturally occurring antibodies use to capture their viral targets. Antibodies are Y-shaped proteins that evolved to grab onto their targets with both "arms." However, if the spikes are few and far between—as is the case with HIV—it is likely that an antibody will bind with only one arm, making its connection to the virus weaker (and easier for a mutation of the spike to render the antibody ineffective).

To test their hypothesis, Bjorkman's group genetically engineered antibody-based molecules that can bind with both arms to a single spike. They started with the virus-binding parts, or Fabs, of broadly neutralizing antibodies—proteins produced naturally by a small percentage of HIV-positive individuals that are able to fight multiple strains of HIV until the virus mutates. When given in combination, these antibodies are quite effective. Rather than making Y-shaped antibodies, the Caltech group simply connected two Fabs—often from different antibodies, to mimic combination therapies—with different lengths of spacers composed of DNA.

Why DNA? In order to engineer antibodies that could latch onto a spike twice, they needed to know which Fabs to use and how long to make the connection between them so that both could readily bind to a single spike. Previously, various members of Bjorkman's group had tried to make educated guesses based on what is known of the viral spike structure, but the large number of possible variations in terms of which Fabs to use and how far apart they should be, made the problem intractable.

In the new work, Bjorkman and Galimidi struck upon the idea of using DNA as a "molecular ruler." It is well known that each base pair in double-stranded DNA is separated by 3.4 angstroms. Therefore, by incorporating varying lengths of DNA between two Fabs, they could systematically test for the best neutralizer and then derive the distance between the Fabs from the length of the DNA. They also tested different combinations of Fabs from various antibodies—sometimes incorporating two different Fabs, sometimes using two of the same.

"Most of these didn't work at all," says Bjorkman, which was reassuring because it suggested that any improvements the researchers saw were not just created by an artifact, such as the addition of DNA.

But some of the fabricated molecules worked very well. The researchers found that the molecules that combined Fabs from two different antibodies performed the best, showing an improvement of 10 to 1,000 times in their ability to neutralize HIV, as compared to naturally occurring antibodies. Depending on the Fabs used, the optimal length for the DNA linker was between 40 and 62 base pairs (corresponding to 13 and 21 nanometers, respectively).

Taking this finding to the next level in the most successful of these new molecules, the researchers replaced the piece of DNA with a protein linker of roughly the same length composed of 12 copies of a protein called tetratricopeptide repeat. The end product was an all-protein antibody-based reagent designed to bind with both Fabs to a single HIV spike.

"That one also worked, showing more than 30-fold average increased potency compared with the parental antibodies," says Bjorkman. "That is proof of principle that this can be done using protein-based reagents."

The greater potency suggests that a reagent made of these antibody-based molecules could work at lower concentrations, making a potential therapeutic less expensive and decreasing the risk of adverse reactions in patients.

"I think that our work sheds light on the potential therapeutic strategies that biotech companies should be using—and that we will be using—in order to make a better antibody reagent to combat HIV," says Galimidi. "A lot of companies discount antibody reagents because of the virus's ability to evade antibody pressure, focusing instead on small molecules as drug therapies. Our new reagents illustrate a way to get around that."

The Caltech team is currently working to produce larger quantities of the new reagents so that they can test them in humanized mice—specialized mice carrying human immune cells that, unlike most mice, are sensitive to HIV.

Along with Galimidi and Bjorkman, additional Caltech authors on the paper, "Intra-Spike Crosslinking Overcomes Antibody Evasion by HIV-1," include Maria Politzer, a lab assistant; and Anthony West, a senior research specialist. Joshua Klein, a former Caltech graduate student (PhD '09), and Shiyu Bai, a former technician in the Bjorkman lab, also contributed to the work; they are currently at Google and Case Western Reserve University School of Medicine, respectively. Michael Seaman of Beth Israel Deaconess Medical Center and Michel Nussenzweig of the Rockefeller University in New York are also coauthors. The work was supported by the National Institutes of Health through a Director's Pioneer Award and a grant from the HIV Vaccine Research and Design Program, as well as grants from the Collaboration for AIDS Vaccine Discovery and the Bill and Melinda Gates Foundation. Nussenzweig is also an investigator with the Howard Hughes Medical Institute. 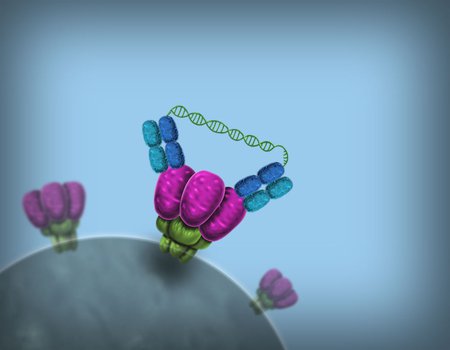 Antibodies generally attack a virus by binding with both of their "arms" to two of the spikes sticking up from the surface of the virus. Caltech researchers propose that HIV's low spike density makes it hard for antibodies to do this. The biologists engineered antibody-based molecules that can bind to a single HIV spike with both arms and showed that the new molecules are more than 100 times better than naturally occurring antibodies at binding to and neutralizing HIV. Credit: Lance Hayashida/Caltech Office of Strategic Communications and the Bjorkman Laboratory/Caltech 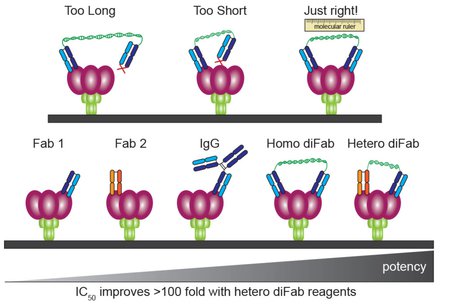 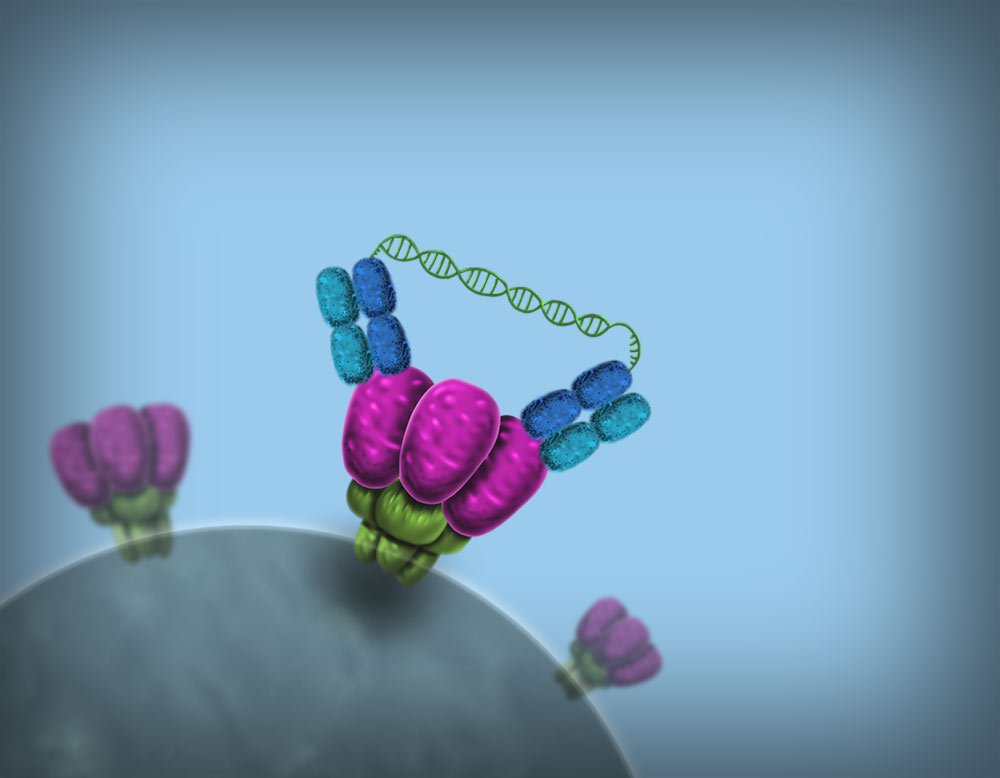 Antibodies generally attack a virus by binding with both of their "arms" to two of the spikes sticking up from the surface of the virus. Caltech researchers propose that HIV's low spike density makes it hard for antibodies to do this. The biologists engineered antibody-based molecules that can bind to a single HIV spike with both arms and showed that the new molecules are more than 100 times better than naturally occurring antibodies at binding to and neutralizing HIV.
Credit: Lance Hayashida/Caltech Office of Strategic Communications and the Bjorkman Laboratory/Caltech
Download Full Image 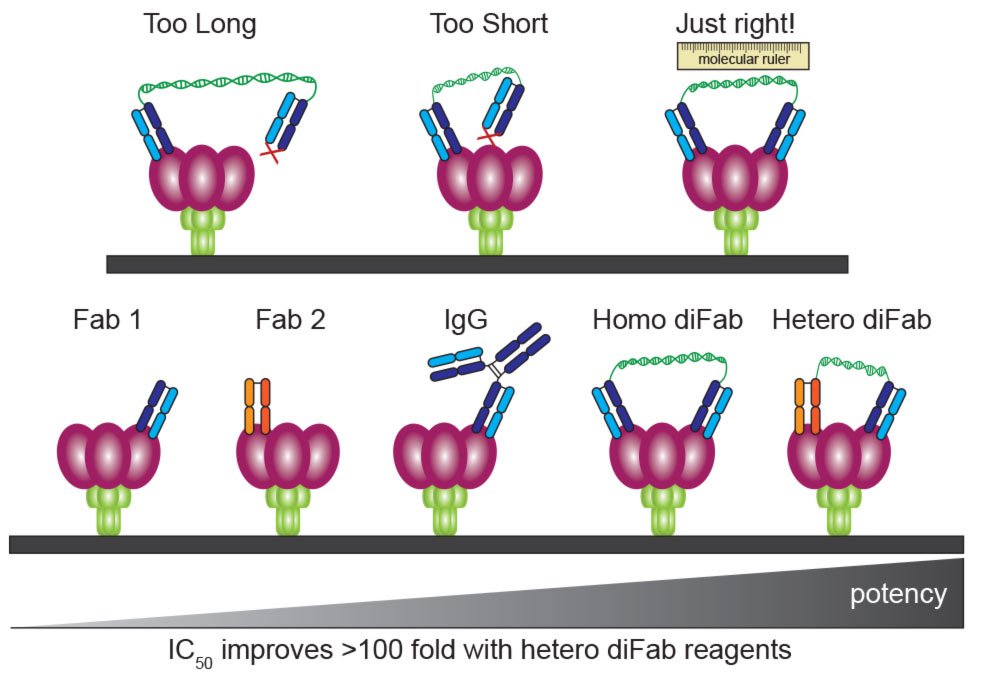 Caltech researchers used DNA as a "molecular ruler" to determine the ideal length to link two virus-binding parts, or Fabs, of antibodies. They also experimented with different mixes of Fabs—either two of the same or two different.
Credit: Rachel Galimidi
Download Full Image