Every drop of rain that falls on the land follows a specific path. Water wants to flow downward, and terrain guides it from streams, to rivers, to the ocean (though some journeys end in a basin such as the Great Salt Lake or Death Valley). Paul Asimow, Caltech's Eleanor and John R. McMillan Professor of Geology and Geochemistry, challenged his students to trace the paths that water takes. For their final assignment for the course Ge 1: Earth and Environment, each student chose a spot near their hometown from which to follow a raindrop through its watershed.

"One student chose his grandparents' house on a bluff above Bozeman, Montana," Asimow says. "Great choice. Drainage from there goes into the East Gallatin River, to the Gallatin River, to the Missouri, to the Mississippi, and out to the Gulf of Mexico downstream of New Orleans. The dams and other disturbances to the flow show up beautifully in the resulting topographic profile."

Under more normal circumstances, Asimow's students learn to read the land in part by going out into the world. Previous classes capped off the course with a field trip to California's Owens Valley, a place caught between two towering mountain ranges that has been the scene of famous disputes over water usage, and which remains a clear example of how erosion shaped the earth. Because of the COVID-19 pandemic, however, a field trip was not possible, so Asimow invented the drop-of-water assignment as a virtual trip.

3D rendering of water's path from Will Dembski's home in Iowa to the Gulf of Mexico
Credit: Will Dembski
Image Lightbox 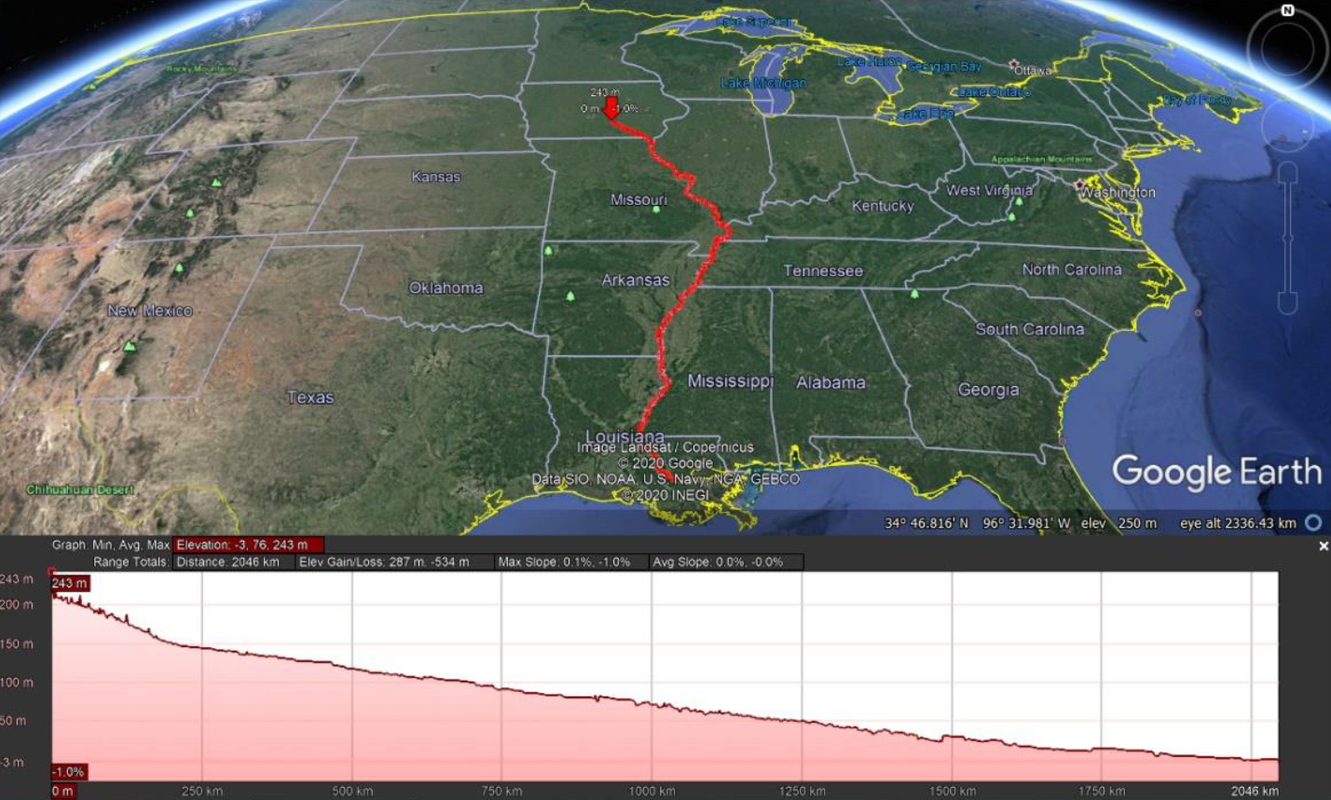 3D rendering of water's path from Will Dembski's home in Iowa to the Gulf of Mexico
Credit: Will Dembski
Download Full Image

To make the project as accessible as possible, Asimow used publicly available tools. Google Earth, he says, can display U.S. Geologic Survey topographic maps overlaid on satellite imagery in three dimensions. This allowed students to define the watershed in which they live and track the downstream direction that water flows. Before giving the assignment, he beta-tested it with his TAs, including Caltech seniors Karen Pham and Sarah Crucilla. "One thing that was cool was how customizable it was," Pham says. "My roommate did it, and when he started mapping things out, his drainage path fell into the Trinity River in Texas. And he said, ‘Oh, this is cool because I know my mom and dad have been canoeing on this river before.'"

The reinvention of the field trip was just one area where Asimow adapted Ge 1 for remote learning. Typically, the course's lab sessions give students hands-on experience with rock samples to handle, scratch, and experiment upon. To replicate that experience, he turned to a service where geology professors around the world have uploaded virtual models that a user can turn and study in 3-D. "We found models that match the minerals that we normally look at in the lab, and we found some rock models for students to look at," Crucilla says. "By doing that, we still could have a little bit of an interactive experience. Students could move the models around. They could observe what was going on rather than us just telling them."

A virtual mineral students could move around. Credit: Caltech

Asimow also dropped off mineral kits at his TAs' off-campus homes (while maintaining social distance, of course) so that during lab hours on Zoom, the TAs could act as the student's hands. For example, while classifying a material, a student may need to perform a scratch test on it, which determines the material's hardness by trying to scratch it with various materials. "As a TA, you could grab the thing and say, 'This is specimen three,'" Pham says. "You'd hold it up to your laptop and scratch it and try and show them the material, and then say, 'No, there's no scratch.'"

For Crucilla and Pham, both of whom graduated this spring, the impact of COVID-19 on Caltech's academic experience this spring has inspired them to think differently about both teaching and learning. For Crucilla, recorded Zoom lectures provided a helpful opportunity to rewind and rewatch material. She and Pham both worried whether they would be able to connect with their lab students without being able to share physical space with them and whether students would be able to engage with the material, but everyone figured out how to make Zoom work.

"The lab went pretty well," Crucilla says. "It seemed students were able to use the technology, which is something I was worried about just because it can be a little bit slow on computers to render the models. But I think students learned a lot."

This is part of a continuing series about innovative ways the Caltech community has approached remote teaching and learning during the COVID-19 pandemic, aided by the Center for Teaching, Learning, and Outreach (CTLO) and Academic Media Technologies.

"Caltech faculty, instructors, TAs, and students have shown tremendous flexibility as they adapted our unique educational experiences to online formats," says CTLO director Cassandra Horii. "This sudden transition taught us a lot about the challenges involved, from the technology to how you interact verbally and visually, to aligning schedules across time zones. Ultimately, perfecting these methods can only enhance our options and flexibility." Caltech offered nearly 400 courses online during the spring 2020 term, bringing together approximately 250 instructors, 340 TAs, and more than 1,400 students online.