"It is a privilege to be part of this talented interdisciplinary team and groundbreaking collaborative project," says Anderson, who will be focusing on identifying cell types within brain regions, such as the amygdala and hypothalamus, that control emotional behaviors. "The fundamental question to be resolved is whether cell types are, indeed, the most useful biological unit for understanding how the brain implements its computations and functions."

"We are essentially cartographers mapping out an unknown space, but the unknown space is the brain," says Pachter, who will focus on developing ways to measure gene expression in large groups of individual cells. "There hasn't yet been a single-cell analysis at this scale performed for any kind of tissue, let alone something as complex as the brain. I think the data collected by this project will open the door to conceptual questions that haven't been approachable before."

"A brain circuit program for understanding the sensorimotor basis of behavior"

Dickinson is the lead principal investigator on a collaborative project with Caltech, Harvard University, Columbia University, University of Washington, and Stanford University. Their project aims to develop a comprehensive theory of behavior in the Drosophila fly that incorporates neural processes operating across hierarchical levels—from circuits that regulate the action of individual muscles to those that regulate behavioral sequences and decisions.

"We have remarkable genetic tools in Drosophila that allow us to manipulate and probe individual cells," says Dickinson. "Our experiments will allow us to examine the function of neurons in intact behaving animals as they walk and fly, exploring for food. The result of our effort will be a new synthesis of how a fully embodied brain works to generate behavior."

Richard Murray is a co-principal investigator and has collaborated extensively with Dickinson on modeling and analyzing the biological systems of insect flight control.

"The collective expertise of these research teams spans the entire nervous system, from the sensory periphery to the motor periphery, and it includes experts in every experimental technique we require—molecular genetics, electrophysiology, optical imaging, biomechanics, quantitative behavioral analysis, control theory, and dynamic network theory," says Murray. "We will exploit mathematical approaches—control theory and dynamic network theory in particular—that are well suited to model feedback and the flow of information through and among different processing stages in the brain."

"The self-tuning brain: cellular and circuit mechanisms of behavioral resilience"

Lois is the principal investigator on a collaboration between Caltech, Boston University, and the University of Washington that aims to understand how the songbird brain heals itself after disease or injury. Songbirds have neural circuits involved in song production and these circuits, after being genetically manipulated to disrupt song, can actually recover and once again produce their original song.

"A major goal in clinical neuroscience is to develop efficient treatments to prevent or minimize the loss of brain function caused by pathological decreases or increases of neuronal activity, which are hallmarks of a wide variety of neurological disorders," says Lois. "Interestingly, in some instances, the brain has evolved mechanisms to partially correct abnormal neuronal function. We will use songbirds to understand the adaptive mechanisms that restore brain function. This cannot only provide insight into the functioning of the normal brain but also guide future approaches to ameliorate loss of brain function caused by disease or injury."

Since the Initiative's inception in 2013, 17 researchers from Caltech have received BRAIN grants. In December 2016, Caltech became the home of the Tianqiao and Chrissy Chen Institute for Neuroscience. 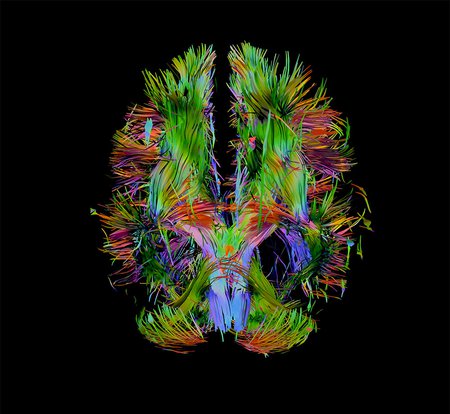 Visualization of white matter fiber organization from diffusion MRI of the brain of a patient with agenesis of the corpus callosum. Credit: Mike Tyszka, Caltech Brain Imaging Center
Image Lightbox 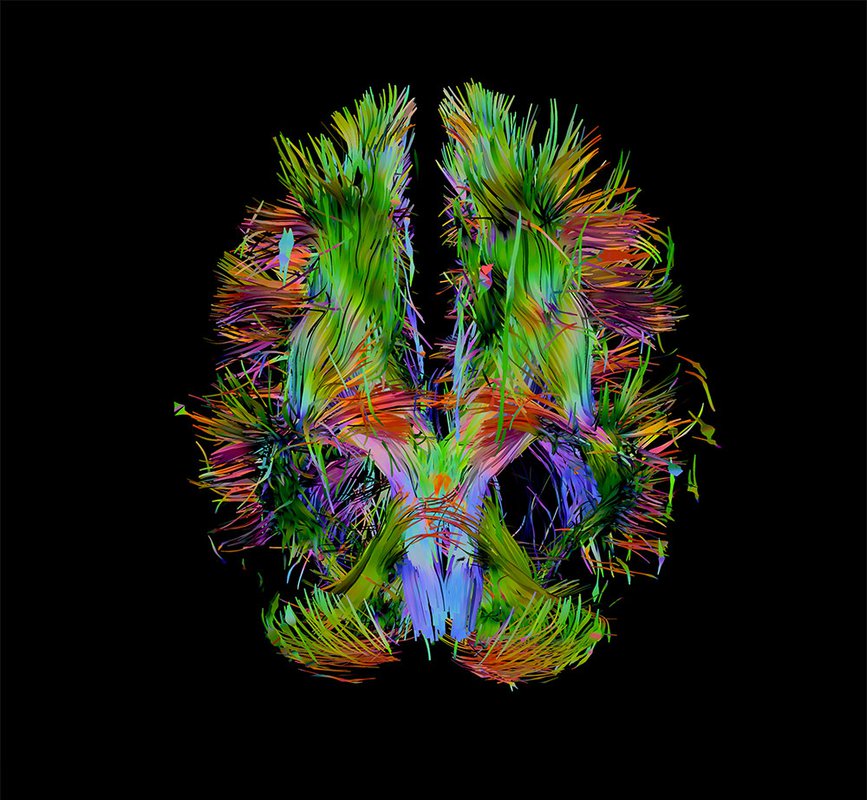