Although researchers have determined the ages of rocks from other planetary bodies, the actual experiments—like analyzing meteorites and moon rocks—have always been done on Earth. Now, for the first time, researchers have successfully determined the age of a Martian rock—with experiments performed on Mars. The work, led by geochemist Ken Farley of the California Institute of Technology (Caltech), could not only help in understanding the geologic history of Mars but also aid in the search for evidence of ancient life on the planet.

Many of the experiments carried out by the Mars Science Laboratory (MSL) mission's Curiosity rover were painstakingly planned by NASA scientists more than a decade ago. However, shortly before the rover left Earth in 2011, NASA's participating scientist program asked researchers from all over the world to submit new ideas for experiments that could be performed with the MSL's already-designed instruments. Farley, W.M. Keck Foundation Professor of Geochemistry and one of the 29 selected participating scientists, submitted a proposal that outlined a set of techniques similar to those already used for dating rocks on Earth, to determine the age of rocks on Mars. Findings from the first such experiment on the Red Planet—published by Farley and coworkers this week in a collection of Curiosity papers in the journal Science Express—provide the first age determinations performed on another planet.

The paper is one of six appearing in the journal that reports results from the analysis of data and observations obtained during Curiosity's exploration at Yellowknife Bay—an expanse of bare bedrock in Gale Crater about 500 meters from the rover's landing site. The smooth floor of Yellowknife Bay is made up of a fine-grained sedimentary rock, or mudstone, that researchers think was deposited on the bed of an ancient Martian lake.

In March, Curiosity drilled holes into the mudstone and collected powdered rock samples from two locations about three meters apart. Once the rock samples were drilled, Curiosity's robotic arm delivered the rock powder to the Sample Analysis on Mars (SAM) instrument, where it was used for a variety of chemical analyses, including the geochronology—or rock dating—techniques.

One technique, potassium-argon dating, determines the age of a rock sample by measuring how much argon gas it contains. Over time, atoms of the radioactive form of potassium—an isotope called potassium-40—will decay within a rock to spontaneously form stable atoms of argon-40. This decay occurs at a known rate, so by determining the amount of argon-40 in a sample, researchers can calculate the sample's age.

Although the potassium-argon method has been used to date rocks on Earth for many decades, these types of measurements require sophisticated lab equipment that could not easily be transported and used on another planet. Farley had the idea of performing the experiment on Mars using the SAM instrument. There, the sample was heated to temperatures high enough that the gasses within the rock were released and could be analyzed by an onboard mass spectrometer.

Farley and his colleagues determined the age of the mudstone to be about 3.86 to 4.56 billion years old. "In one sense, this is an utterly unsurprising result—it's the number that everybody expected," Farley says.

Indeed, prior to Curiosity's geochronology experiment, researchers using the "crater counting" method had estimated the age of Gale Crater and its surroundings to be between 3.6 and 4.1 billion years old. Crater counting relies on the simple fact that planetary surfaces are repeatedly bombarded with objects that scar their surface with impact craters; a surface with many impact craters is presumed to be older than one with fewer craters. Although this method is simple, it has large uncertainties.

"What was surprising was that our result—from a technique that was implemented on Mars with little planning on Earth—got a number that is exactly what crater counting predicted," Farley says. "MSL instruments weren't designed for this purpose, and we weren't sure if the experiment was going to work, but the fact that our number is consistent with previous estimates suggests that the technique works, and it works quite well."

The researchers do, however, acknowledge that there is some uncertainty in their measurement. One reason is that mudstone is a sedimentary rock—formed in layers over a span of millions of years from material that eroded off of the crater walls—and thus the age of the sample drilled by Curiosity really represents the combined age of those bits and pieces. So while the mudstone indicates the existence of an ancient lake—and a habitable environment some time in the planet's distant past—neither crater counting nor potassium-argon dating can directly determine exactly when this was.

To provide an answer for how the geology of Yellowknife Bay has changed over time, Farley and his colleagues also designed an experiment using a method called surface exposure dating. "The surface of Mars, the surface of Earth, and basically all surfaces in the solar system are being bombarded by cosmic rays," explains Farley, and when these rays—very high-energy protons—blast into an atom, the atom's nucleus shatters, creating isotopes of other elements. Cosmic rays can only penetrate about two to three meters below the surface, so the abundance of cosmic-ray-debris isotopes in rock indicates how long that rock has been on the surface.

Using the SAM mass spectrometer to measure the abundance of three isotopes that result from cosmic-ray bombardment—helium-3, neon-21, and argon-36—Farley and his colleagues calculated that the mudstone at Yellowknife Bay has been exposed at the surface for about 80 million years. "All three of the isotopes give exactly the same answer; they all have their independent sources of uncertainty and complications, but they all give exactly the same answer. That is probably the most remarkable thing I've ever seen as a scientist, given the difficulty of the analyses," Farley says.

This also helps researchers looking for evidence of past life on Mars. Cosmic rays are known to degrade the organic molecules that may be telltale fossils of ancient life. However, because the rock at Yellowknife Bay has only been exposed to cosmic rays for 80 million years—a relatively small sliver of geologic time—"the potential for organic preservation at the site where we drilled is better than many people had guessed," Farley says.

Furthermore, the "young" surface exposure offers insight into the erosion history of the site. "When we first came up with this number, the geologists said, 'Yes, now we get it, now we understand why this rock surface is so clean and there is no sand or rubble,'" Farley says.

The exposure of rock in Yellowknife Bay has been caused by wind erosion. Over time, as wind blows sand against the small cliffs, or scarps, that bound the Yellowknife outcrop, the scarps erode back, revealing new rock that previously was not exposed to cosmic rays.

"Imagine that you are in this site a hundred million years ago; the area that we drilled in was covered by at least a few meters of rock. At 80 million years ago, wind would have caused this scarp to migrate across the surface and the rock below the scarp would have gone from being buried—and safe from cosmic rays—to exposed," Farley explains. Geologists have developed a relatively well-understood model, called the scarp retreat model, to explain how this type of environment evolves. "That gives us some idea about why the environment looks like it does and it also gives us an idea of where to look for rocks that are even less exposed to cosmic rays," and thus are more likely to have preserved organic molecules, Farley says.

Curiosity is now long gone from Yellowknife Bay, off to new drilling sites on the route to Mount Sharp where more dating can be done. "Had we known about this before we left Yellowknife Bay, we might have done an experiment to test the prediction that cosmic-ray irradiation should be reduced as you go in the downwind direction, closer to the scarp, indicating a newer, more recently exposed rock, and increased irradiation when you go in the upwind direction, indicating a rock exposed to the surface longer ago," Farley says. "We'll likely drill in January, and the team is definitely focused on finding another scarp to test this on."

This information could also be important for Curiosity chief scientist John Grotzinger, Caltech's Fletcher Jones Professor of Geology. In another paper in the same issue of Science Express, Grotzinger—who studies the history of Mars as a habitable environment—and colleagues examined the physical characteristics of the rock layers in and near Yellowknife Bay. They concluded that the environment was habitable less than 4 billion years ago, which is a relatively late point in the planet's history.

Farley's work is published in a paper titled "In-situ radiometric and exposure age dating of the Martian surface." Other Caltech coauthors on the study include Grotzinger, graduate student Hayden B. Miller, and Edward Stolper. 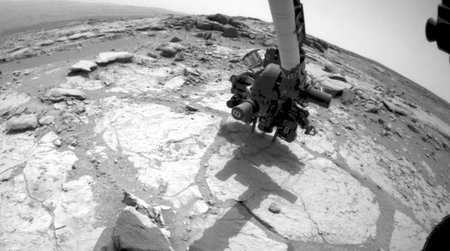 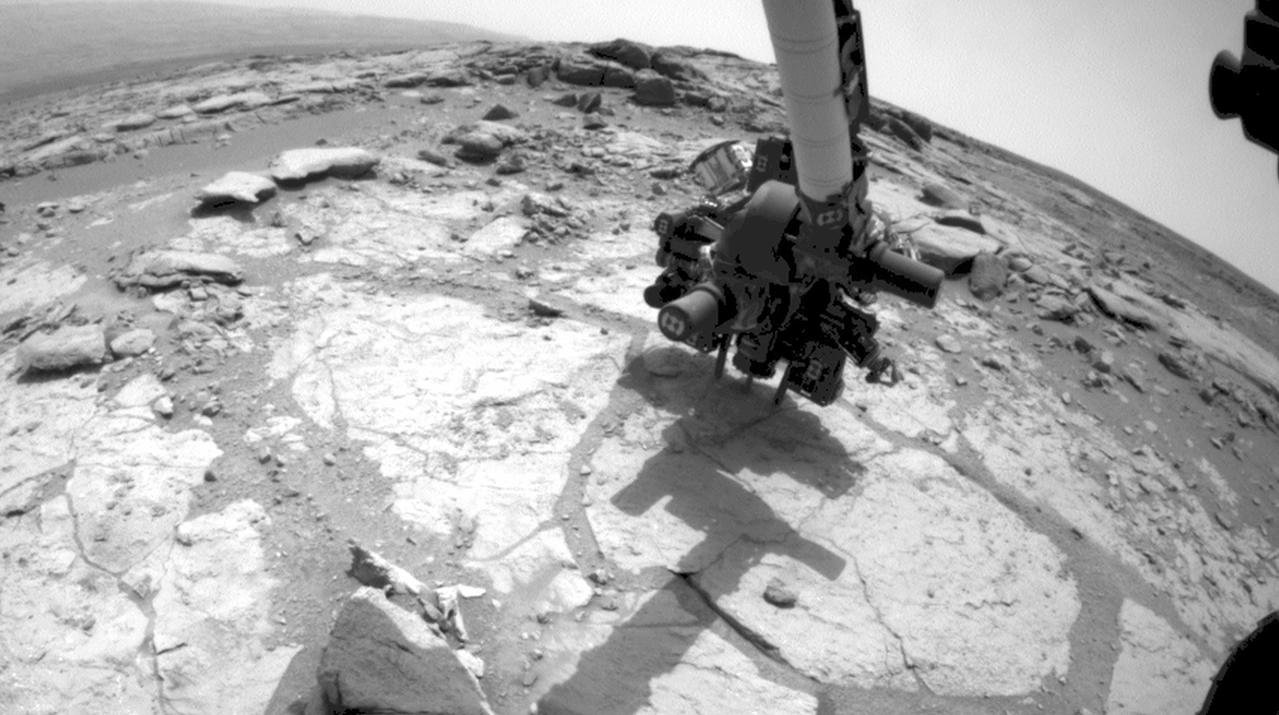