One hundred years ago, in 1913, Alfred H. Sturtevant helped lay the foundations of modern biology by mapping the relative location of a series of genes on a chromosome. Chromosomes are the long threads in the cell's nucleus that had been discovered in the 1880s in cells undergoing division; however, their role in the process—if any—was unclear. Sturtevant was a graduate student at Columbia University at the time, studying patterns of heredity in Thomas Hunt Morgan's lab. Morgan would found Caltech's biology department in 1928, bringing Sturtevant with him as a professor.

Plants and animals have been bred to enhance specific traits—the speed of a stallion, or the sweetness of a grape—since the dawn of civilization. And everyone knew that if you were tall, blond, and blue-eyed, the odds were that your kids would be, too. But how these characteristics were passed down from parent to child—or whether they were simply products of one's environment and could be induced by, say, eating more eels—was a mystery, as was the appearance of the occasional redhead in a dark-haired family.

A monk named Gregor Mendel in an abbey in what is now the Czech Republic had in fact divined the secret in the mid-1800s, but his "Experiments on Plant Hybridization," published in 1866 in the Proceedings of the Natural History Society of Brno, did not exactly make a splash in scientific circles. Patiently crossbreeding various strains of pea plants, Mendel had compiled pedigrees for such traits as green pods versus yellow pods as they appeared in some 29,000 plants grown over several generations. He concluded that these characteristics were represented by "factors" that were somehow passed down from each individual to its offspring.

Mendel had trained as a physicist before entering the priesthood, and, as they say, he did the math. Working backward from his tallies of how often each individual trait appeared in every generation, he concluded that every plant carried not one but two copies of each factor, and that they need not be identical. Some factors were dominant—for example, any plant having even a single copy of the green factor would have green pods. Others were recessive—only pea plants with two copies of the yellow factor had yellow pods.

The act of pollination shuffled the factors: each parent contributed only one of its two copies, and there was a 50-50 chance as to which copy it would be. Thus the seeds coming from a pair of plants carrying one green-pod factor and one yellow would contain, in equal number, green-green (resulting in green pods), green-yellow (also resulting in green pods), yellow-green (ditto) and yellow-yellow—a three-to-one ratio of green pods to yellow ones. Mendel also concluded that every factor was inherited independently—whether a pod was yellow or green had no bearing on whether it was lumpy or smooth. The calculations got trickier with each additional factor and successive generation, but the ratios between all the possible outcomes still reduced to simple whole numbers.

Mendel's work was rediscovered at the turn of the 20th century. By then it was known that chromosomes always came in pairs of equal length in body cells. Furthermore, egg cells and sperm cells had only half the usual number of chromosomes—and unpairable ones at that. The potential connection between chromosome counts and Mendel's math dawned on several people—not including Morgan, who was skeptical not only of Mendel but of Darwin and the entire notion of natural selection. "Nature," Morgan wrote in Popular Science Monthly in 1905, "makes new species outright."

Morgan began to change his mind after he started breeding fruit flies in 1909. Their short lives (10 days from egg to adult) and incredible fecundity (you could breed them by the millions, and he did) made them an ideal lab animal for experimental zoology—the recently coined term "genetics" had yet to catch on—and the fact that they took up very little lab space didn't hurt. He kept hundreds of strains, each in its own quart-sized milk bottle stoppered with a sponge to let fresh air in. And, as he was about to discover, it was going to be very handy that the genus Drosophila has only four pairs of chromosomes, versus 23 for humans.

One of these four pairs determined the fly's sex. It was known by then that female flies had two so-called X chromosomes, paired in the usual way. Male flies had only one X chromosome, mismatched with a much shorter Y. Fruit flies normally have red eyes, but in 1910 Morgan discovered a mutant in which the males, and only the males, had white eyes. This could only happen, he reasoned, if the alteration had occurred in the sex chromosome; and if this one trait was physically associated with a specific chromosome, the same was probably true for others.

But as more and more mutations were discovered, it became apparent that Mendel's math wasn't working. Rather than every trait being inherited independently, some of them, such as eye color and body color, tended to get passed down together—but not consistently. In 1911, Morgan proposed that any collection of traits apparently linked to one another must reside on the same chromosome, along which they were arrayed like stations on a railroad line. Chromosome pairs had been observed to twist together during the early stages of egg- and sperm-cell formation, and it was conceivable that pieces of each chromosome might break off and trade places during this intimate embrace. If the breaks occurred at random, the odds of two traits crossing over would be much higher if they lay close to each other.

Which brings us, at long last, to Morgan's grad student Alfred Sturtevant. Sturtevant realized that if a given chromosome was the same length in all flies, and if genes had specific physical locations on it, the "distance" between any two genes should be a fixed number—and one that he could measure by how often they were inherited together. In other words, no matter which milk bottle a batch of flies came from, any pair of mutations would show a consistent crossover percentage from generation to generation. Furthermore, if these "distances" were real, he could use them to work out the genes' relative locations—if the distance between genes A and C was exactly equal to the distances from A to B and B to C, clearly gene B lay between A and C.

Sturtevant was so excited by his idea that, in archetypal Techer fashion, he blew off his homework that night to explore it. With data from tens of thousands of flies at his disposal, he counted how often various traits—as many as three at a time—were inherited together, and calculated the percentages for each batch of flies.  Then, since nobody knew how long a chromosome actually was, he took each 1 percent decline in crossover frequency as equivalent to inserting one unit of distance between the pair of genes in question. He showed his "map" to Morgan the following morning; the impressed professor saw to its prompt publication.

Sturtevant got his PhD the following year and stayed on in what was now known around the world as "the fly room." Morgan moved the lab lock, stock, and milk bottles from Columbia to Caltech in 1928, and in 1933 he became the Institute's second Nobel laureate. Sturtevant came with Morgan as part of the deal, and his maps of genetic linkages remain the gold standard today—although the unit of measure he invented is now, ironically, called the centimorgan. Both men spent the balance of their careers here, ushering in the first golden era of molecular biology. 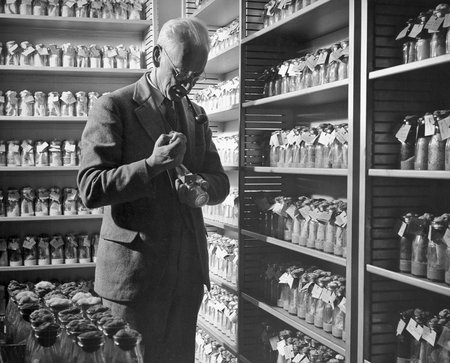 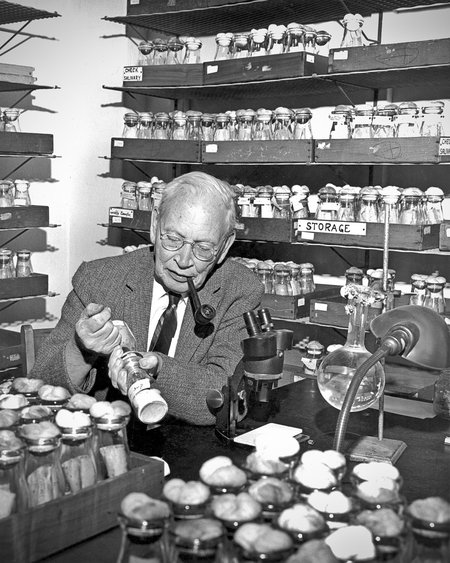 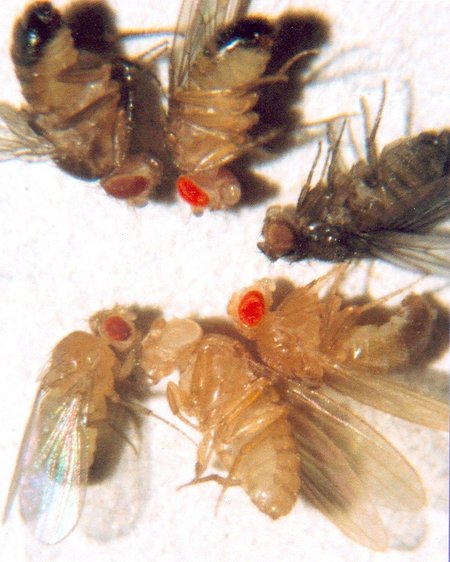 In the fruit fly, red eyes and black bodies are the norm, products of the dominant forms of their respective genes. Recessive forms produce other colors. Clockwise, from the top: brown eyes, cinnabar (a shade of deep red), sepia, vermilion (a shade of orange-red), white, and red. The white-eyed fly also has a yellow body. Credit: Wikimedia Commons 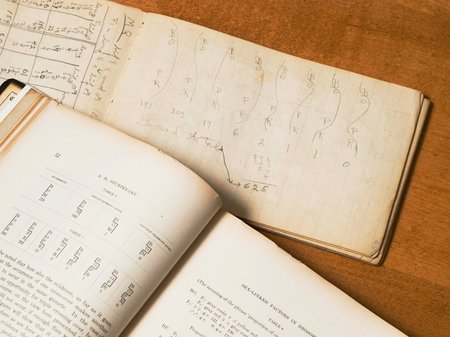 This page from Sturtevant's lab notes shows the inheritance patterns of four genes he abbreviated as B, O, P, and R. In the leftmost column, for example, he counted 393 flies in which all four genes came from the same parent. In the adjoining column, 203 flies got genes B and O from one parent and genes P and R from the other. B stands for black bodies (versus yellow); O is for eosin (a strain in which the eyes have a pinkish-yellowish cast instead of the normal red); P is for vermillion eyes (v Credit: Seth Hansen/Caltech
Image Gallery Lightbox 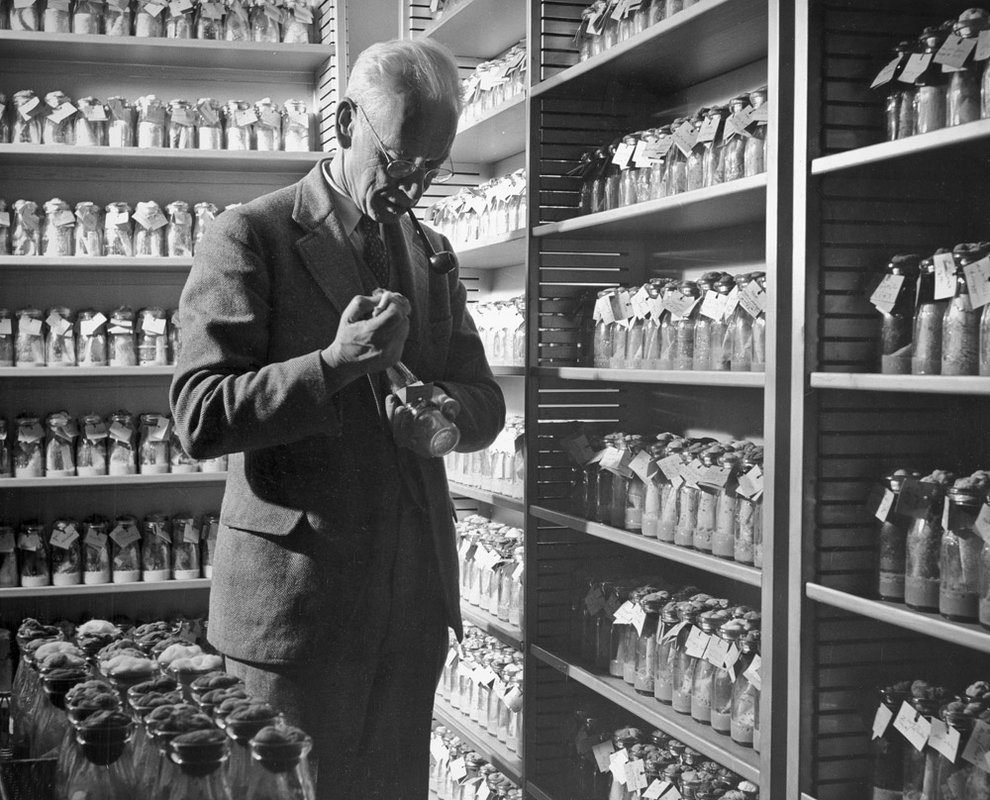 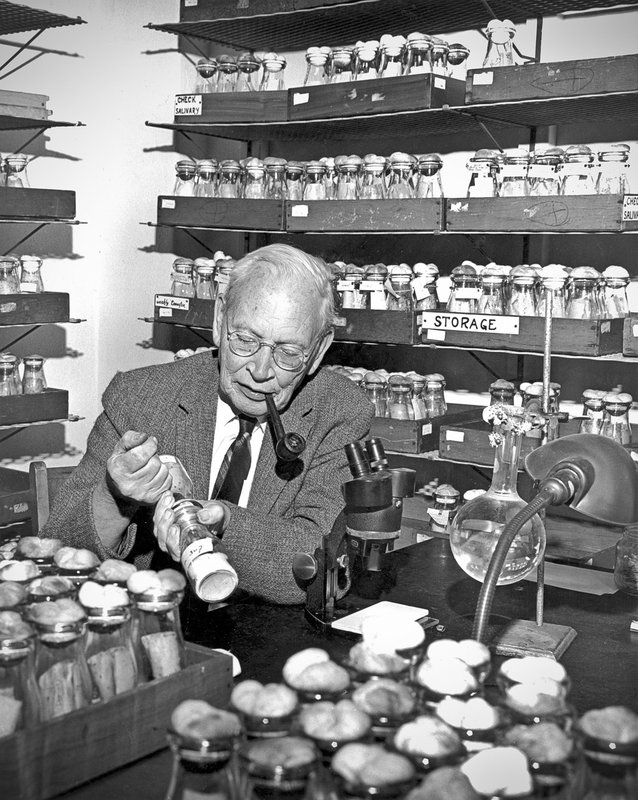 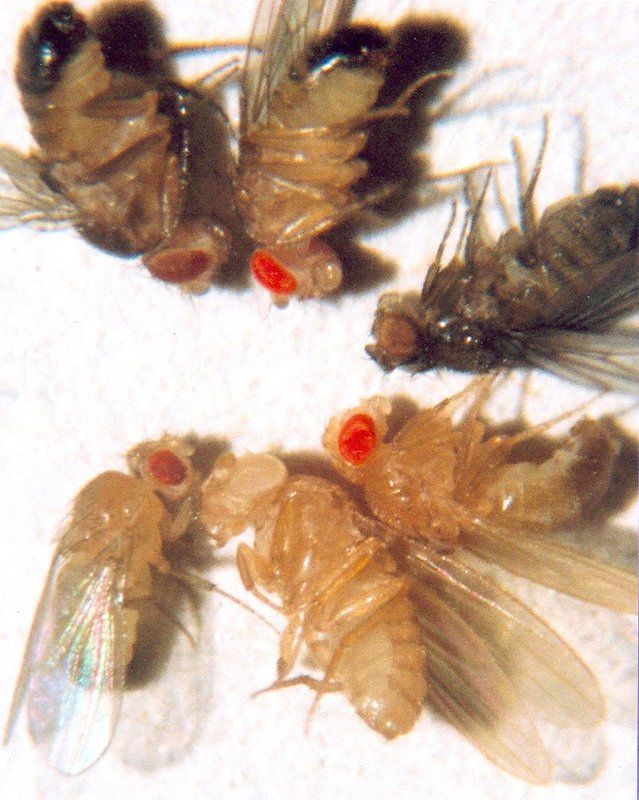 In the fruit fly, red eyes and black bodies are the norm, products of the dominant forms of their respective genes. Recessive forms produce other colors. Clockwise, from the top: brown eyes, cinnabar (a shade of deep red), sepia, vermilion (a shade of orange-red), white, and red. The white-eyed fly also has a yellow body.
Credit: Wikimedia Commons
Download Full Image 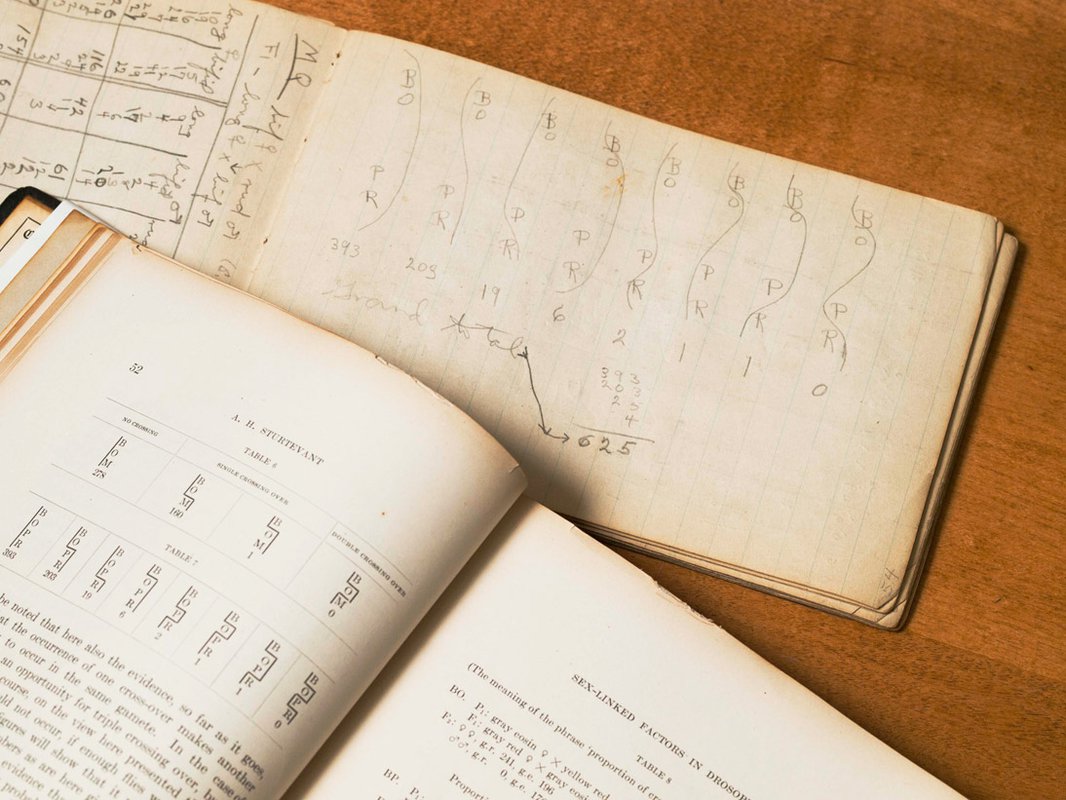 This page from Sturtevant's lab notes shows the inheritance patterns of four genes he abbreviated as B, O, P, and R. In the leftmost column, for example, he counted 393 flies in which all four genes came from the same parent. In the adjoining column, 203 flies got genes B and O from one parent and genes P and R from the other. B stands for black bodies (versus yellow); O is for eosin (a strain in which the eyes have a pinkish-yellowish cast instead of the normal red); P is for vermillion eyes (v
Credit: Seth Hansen/Caltech
Download Full Image