When one encounters a group of fruit flies invading their kitchen, it probably appears as if the whole group is vying for a sweet treat. But a closer look would likely reveal the male flies in the group are putting up more of a fight, particularly if ripe fruit or female flies are present. According to the latest studies from the fly laboratory of California Institute of Technology (Caltech) biologist David Anderson, male Drosophilae, commonly known as fruit flies, fight more than their female counterparts because they have special cells in their brains that promote fighting. These cells appear to be absent in the brains of female fruit flies.

"The sex-specific cells that we identified exert their effects on fighting by releasing a particular type of neuropeptide, or hormone, that has also been implicated in aggression in mammals including mouse and rat," says Anderson, the Seymour Benzer Professor of Biology at Caltech, and corresponding author of the study. "In addition, there are some recent papers implicating increased levels of this hormone in people with personality disorders that lead to higher levels of aggression."

The team's findings are outlined in the January 16 version of the journal Cell.

At first glance, a fruit fly may seem nothing like a human being. But look much closer, at a genetic level, and you will find that many of the genes seen in these flies are also present—and play similar roles—in humans. However, while such conservation holds for genes involved in basic cellular functions and in development, whether it was also true for genes controlling complex social behaviors like aggression was far from clear.

"Our studies are the first, to our knowledge, to identify a gene that plays a conserved role in aggression all the way from flies to humans," explains Anderson, who is also a Howard Hughes Medical Institute investigator. If that is true for one such gene, it is also is likely true for others, Anderson says. "Our study validates using fruit flies as a model to discover new genes that may also control aggression in humans."

The less-complex nervous system of the fruit fly makes them easier to study than people or even mice, another genetic model organism. For this particular study, the research team created a small library consisting of different fly lines; in each line, a different set of specific neurons was genetically labeled and could be artificially activated, with each neuron type secreting a different neuropeptide. Forty such lines were tested for their ability to increase aggression when their labeled neurons were activated. The one that produced the most dramatic increase in aggression had neurons expressing a particular neuropeptide called tachykinin, or Tk.

Next, Anderson and his colleagues used a set of genetic tools to identify exactly which neurons were responsible for the effect on aggression and to see if the gene that encodes for Tk also controls aggressive behavior by acting in that cell.

"We had to winnow away the different cells to find exactly which ones were involved in aggression—that's how we discovered that within this line, there was a male-specific set of neurons that was responsible for increased aggressive behavior," explains Kenta Asahina, a postdoctoral scholar in Anderson's lab and lead author of the study. Male-specific neurons controlling courtship behavior had previously been identified in flies, but this was the first time a male-specific neuron was found that specifically controls aggression. Having identified that neuron, the team was then able to modify its gene expression. Says Asahina, "We found that if you overproduce the gene in that cell and then stimulate the cell, you get an even stronger effect to promote aggression than if you stimulate the cell without overproducing the gene."

In fact, combining cell activation and the overproduction of the neuropeptide, which is released when the cell is activated, caused the flies to attack targets they normally would not. For example, when the researchers eliminated cues that normally promote aggression in a target fly — such as pheromones — the flies containing the hyperactivated "aggression" neurons attacked those targets despite the absence of the cues.

Moreover, this combined activation of the cell and the gene produced such a strong effect that the researchers were even able to get a fly to attack an inanimate object—a fly-sized magnet—when it was moved around in an arena.

Such behavior had never been observed previously. "A normal fly will chase the magnet, but will never attack the magnet," Asahina explains. "By over-activating these neurons, we are able to get the fly to attack an object that displays none of the normal signals that are required to elicit aggression from another fly."

"These results suggest that what these neurons are doing is promoting a state of aggressive arousal in the fly," Anderson says. "This elevated level of aggressiveness drives the fly to attack targets it would normally ignore. I wouldn't anthropomorphize the fly and say that it has increased 'anger,' but activating these neurons greatly lowers its threshold for attack."

The finding that these neurons are present in the brains of male but not female flies indicates that this sex difference in aggressive behavior is genetically based. At the same time, Asahina stresses, finding a gene that influences aggression does not mean that aggression is controlled only by genes and always genetically programmed.

"This is a very important distinction, because when people hear about a gene implicated in behavior, they automatically think it means that the behavior is genetically determined. But that is not necessarily the case," he says. "The key point here is that we can say something about how the gene acts to influence this behavior—that is, is by functioning as a chemical messenger in cells that control this behavior in the brain. We've been able to study the problem of aggressive behavior at two levels, the cell level and the gene level, and to link those studies together by genetic experiments."

This research, Anderson says, has given his team a beachhead into the circuitry in the fly brain that controls aggression, a behavior that they will continue to try to decode.

"We have to use this point of entry to discover the larger circuit in which those cells function," Anderson says. "If aggression is like a car, and if more aggression is like a car going faster, we want to know if what we're doing when we trigger these cells is stepping on the gas or taking the foot off the brake. And we want to know where and how that's happening in the brain. That's going to take a lot of work."

Additional Caltech authors on the Cell paper, "Male-specific Tachykinin-expressing neurons control sex differences in levels of aggressiveness in Drosophila," are Kiichi Watanabe, Brian J. Duistermars, Eric Hoopfer, Carlos Roberto González, Eyrún Arna Eyjólfsdóttir, and Pietro Perona. Their work was supported by the National Institutes of Health, a grant from the Gordon and Betty Moore Foundation, the Japan Society for the Promotion of Science, and the Howard Hughes Medical Institute. 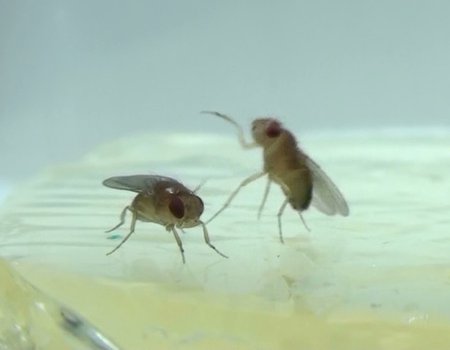 One male fly lunges at another in a show of aggression. Credit: Anderson Lab/Caltech 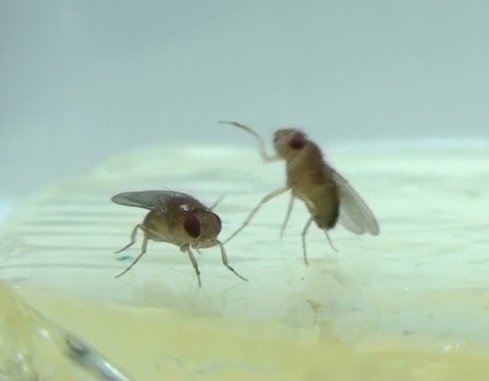 One male fly lunges at another in a show of aggression.
Credit: Anderson Lab/Caltech
Download Full Image