In November, Caltech and the City of Pasadena unveiled a new citywide fiber optic earthquake detector capable of mapping how temblors are shaking the city at millimeter-scale resolution.

A month and a half later, while millions of spectators watched floats and bands parade down Colorado Boulevard, Caltech researchers watched the seismic signal of those floats and bands, captured in fine detail by the array.

"The Rose Parade is an amazing cultural event in Pasadena, and the floats and bands run right on top of our newly established fiber seismic array," says Zhongwen Zhan (MS '08, PhD '13), assistant professor of geophysics and the lead researcher on the fiber optic project. Zhan is the corresponding author of a paper about the Rose Parade's seismic signature, published on May 6 in Seismological Research Letters.

The Pasadena Array takes advantage of two currently unused, or "dark," strands of the City of Pasadena's fiber optic cable network, which is typically buried just below ground and stretches in a large loop around the city. Two laser emitters shoot beams of light through the cables. The cables have tiny imperfections every few meters that reflect back a minuscule portion of the light to the source, where it is tracked and recorded. In this manner, each imperfection acts as a trackable waypoint along the fiber optic cable. Seismic waves moving through the ground cause the cable to expand and contract slightly, which changes the travel time of light to and from these waypoints. Thus, the imperfections act like individual "virtual" seismometers that allow seismologists to observe the motion of seismic waves. The technique is known as Distributed Acoustic Sensing, or DAS.

The Pasadena Array has more than 5,000 of these virtual sensors; about 400 were positioned along the Rose Parade route. Zhan found that heavy floats—those weighing about 16,000 to 18,000 kilograms—produced distinct long-period signals, while marching bands produced weaker long-period signals but strong signals in the 1.0–10 Hz frequency band.

Digging into the data, Zhan was able to spot the most ground-shaking marching bands: those from Southern University and A&M College, and the hometown Pasadena City College Honor Band. He also detected the gap caused when the float "Mrs. Meyer's Clean Day" got stuck at the corner of Colorado and Sierra Madre boulevards for six minutes.

"The 2020 Rose Parade provided a rare calibration opportunity with well-controlled unidirectional traffic and heavy, slow-moving vehicles right on top of a section of the array. The Pasadena Array performed as well as expected," Zhan says.

The study is titled "Rose Parade seismology: signatures of floats and bands on optical fiber." Caltech co-authors are postdoctoral scholar Xin Wang and graduate student Ethan F. Williams (MS '19); other co-authors include Martin Karrenbach at OptaSense Inc.; Miguel González Herráez at the University of Alcalá, Spain; and Hugo Fidalgo Martins at CSIC, Spain. This research was supported by a five-year agreement with the City of Pasadena to use the dark fiber; a National Science Foundation CAREER Award; and the Caltech-JPL President's and Director's Research and Development Fund (PDRDF). 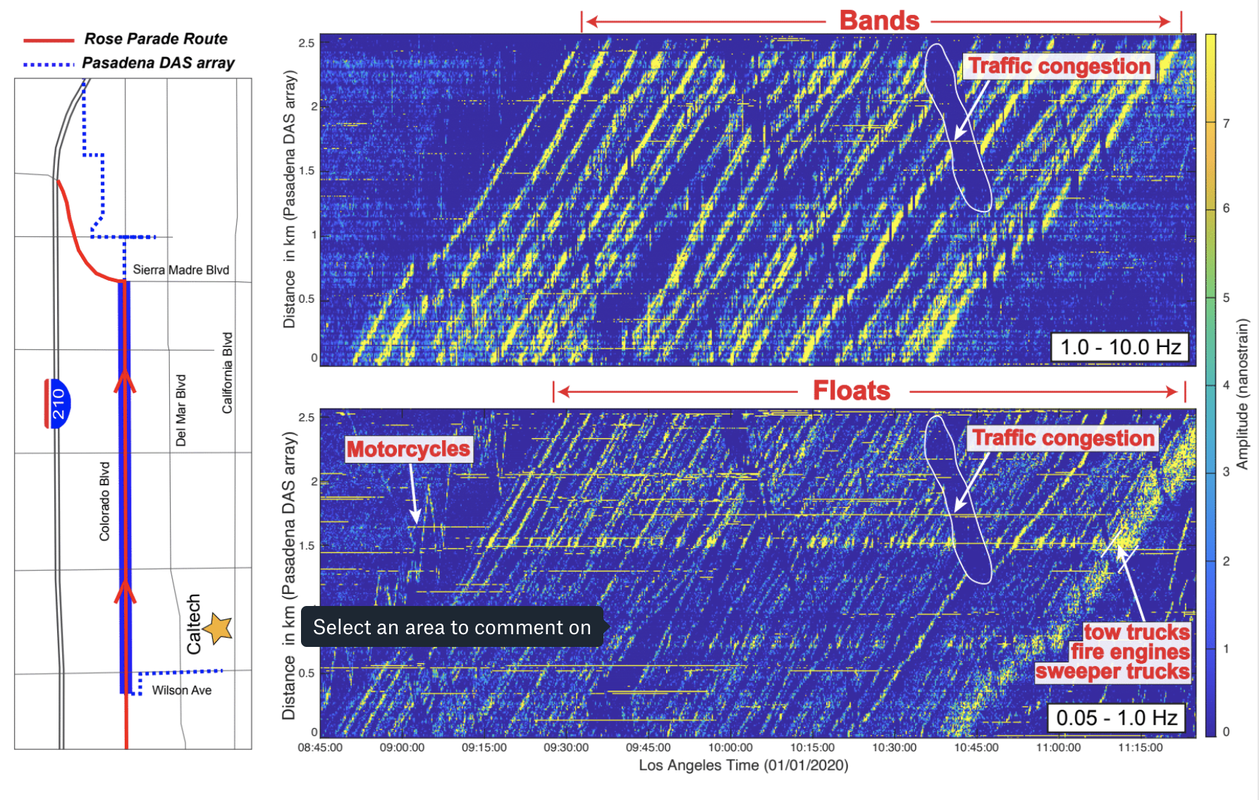