Boehm, the William L. Valentine Professor of Physics, Emeritus, was born on June 9, 1924 in Basel, Switzerland, to Hans and Marguerite Boehm. Boehm grew up in a musical family; his parents played in string quartets, and as a youth he picked up the flute, which he played with zeal for decades.

Boehm's early years were marked by war. Basel is located at the junction of the borders separating Switzerland, Germany, and France. Early in World War II, Germany and Italy intended to invade Switzerland in the planned but canceled Operation Tannenbaum; later in the conflict, Basel was accidentally bombed by an Allied aircraft.

"You know, Switzerland was not involved directly in the war, but we were surrounded by war," Boehm recalled in a 1999 interview for the Caltech Archives. "We had food rationing, and there was bombing going on not far from Basel. And everybody was in the military service—my father was, and my brothers."

Boehm himself spent a year in military service near the Rhine River but arranged it so that he could continue his academic studies sporadically, focusing on physics. Among other things, he attended lectures by Jean Weigle, at the time a professor of physics in Geneva (he was a research associate in biology at Caltech from 1949–68). Boehm earned a diplom (an academic degree) from the Federal Institute of Technology (ETH Zurich) in 1948 and a PhD in physics from the same institute in 1951.

Boehm had no shortage of inspiring mentors in the sciences. As a teenager, he met and began to assist Walter Rudolf Hess, who would later earn the Nobel Prize in Physiology or Medicine in 1949 for mapping the areas of the brain that control internal organs. Boehm continued working under Hess as a university student conducting research on brain waves. Then, while earning his PhD, he took classes from Wolfgang Pauli, who had just won the 1945 Nobel Prize in Physics for his discovery of the "Pauli exclusion principle." Pauli sat on Boehm's PhD committee in 1951.

In 1952, Boehm moved to the United States at the invitation of Columbia University nuclear physicist Chien-Shiung Wu. A few years after Boehm's arrival at Columbia, Wu would upend the known laws of physics by demonstrating that, in contrast to other physical forces, weak interactions among decaying particles are not always "symmetrical." Prior to the so-called Wu Experiment (for which the 1957 Nobel Prize in Physics was awarded to her colleagues Tsung-Dao Lee and Chen-Ning Yang; she won the inaugural Wolf Prize in Physics in 1978 for the work), it was theorized that the current world and a mirror image of the world would be identical, just with left and right swapped, or symmetrical.

The Wu Experiment examined the beta decay of a radioactive isotope of cobalt, cobalt-60, and found that the angular momentum of the isotope's nucleus, or its nuclear "spin," would be the same in a mirror world as in our own—not the opposite. That discovery would help shape Boehm's career. For years afterward, he investigated asymmetries in physical forces called "parity violations."

Boehm worked with Wu in New York for a year and a half, and during that time, he connected with Pierre Marmier, a friend from Zurich who was then a postdoc at Caltech. Marmier encouraged Boehm to apply for a position at the Institute. He received offers from both Caltech and Stanford University, and ultimately chose to come to Pasadena. As Boehm recalled in his interview with the Archives, "At Caltech, I was told, 'You won't have any teaching obligation. You can do research. You have a one-year appointment, but it may be renewed. And then we'll see.' So then I thought, well, I have no family, I have no obligations, I prefer to do research. I liked Caltech. And that's when I decided to come here."

Boehm accepted a position as a research fellow at Caltech in July 1953, became an assistant professor in 1958, and earned tenure in 1961. During that period, Boehm became friends (and camping buddies) with Max Delbrück, professor of biology, who would go on to win the 1969 Nobel Prize in Physiology or Medicine with Salvador Luria and Alfred Hershey for work on the replication mechanism and the genetic structure of viruses.

Despite his initial reservations, Boehm taught several courses covering mechanics, electricity, and magnetism. "I enjoyed it, but I preferred research," Boehm said. "Teaching was never my greatest love, I must say, but I didn't mind; it was part of my duty."

While in Los Angeles, Boehm met Ruth Sommerhalder, who was also from Basel, and they married on November 26, 1956.

At Caltech, Boehm became the head of a group known as "Physics 34," which was also led by Petr Vogel, a senior research associate in physics, emeritus; and Herb Henrikson (BS '53). The group had three or four postdocs and a commensurate number of graduate students at any given time.

The group was based in the Norman Bridge Laboratory of Physics, West, ("West Bridge"), which at the time was also called Building 33. "Not sure why we were Physics 34 in Building 33," says Peter Fisher (PhD '88), Boehm's former graduate student and now head of the physics department at MIT. Boehm took over Physics 34 from Jesse DuMond (BS '16, PhD '29), professor of physics, who pioneered precision instrumentation, inventing and constructing several new spectrometers. The research Boehm conducted in the 1950s and 1960s pertained to nuclear structure and particle behavior, especially the parity violation that Wu had demonstrated. He was among the first to use nuclear physics techniques to do fundamental research on weak interactions and the nature of neutrinos (nearly massless subatomic particles that almost never interact with normal matter).

In the late '50s, several schools—including his alma mater, ETH Zurich—offered Boehm the opportunity to return to Europe to teach. But the casual, congenial atmosphere at Caltech kept Boehm in Pasadena. For example, "You could talk to [Richard] Feynman—no big deal, anytime—and it was wonderful," Boehm said in 1999. (In his famous Feynman Lectures on Physics, Feynman would go on to reference Boehm's work confirming that electrons spin mostly to the left)

In one experiment, Boehm and Physics 34 attempted to measure the precise change in energy level, due to the Strong interaction, that occurs when a hydrogen atom captures a pion (a subatomic particle) and becomes pionic hydrogen. "Herb Henrikson described it as pushing an elephant out a window of a 747 flying at 30,000 feet, and then as the elephant hits the ground, trying to measure the sound made by its eyelashes," says former graduate student Paul Lee (BS '67, MS '69, PhD '71), now professor emeritus of physics and astronomy at Cal State Northridge. "It took about 10 people four years, but we were finally able to establish a limit on that energy change that was better than what people had done before."

In another experiment, the team searched for signs of neutrinoless double beta decay—an oft-sought-but-never-detected theoretical phenomenon. In regular beta decay, a single neutron decays into a proton, electron, and an antineutrino. In double beta decay, which has been observed in a handful of isotopes, two neutrons decay simultaneously in the same atomic nucleus.

If, as some have suggested, neutrinos are their own antiparticles, then the two neutrinos produced by a double beta decay could potentially annihilate one another. According to the standard model of physics, such an event cannot happen. Observing the event, therefore, would challenge physicists current understanding of the world. "It's a huge deal," says Fisher, who did his dissertation at Caltech on the experiment. "If you see this, you know a fundamental rule of physics has been broken."

The 14 isotopes known to be capable of double beta decay have incredibly long half-lives, making detecting them difficult at best. To search for a neutrinoless double beta decay event, Physics 34 set up a multi-institution experiment with the Université de Neuchâtel and the Paul Scherrer Institute (both in in Switzerland) at a site called the Gotthard Road Tunnel, which runs through a mountain in the Alps where kilometers of solid rock create a "quiet" environment to study rare particle interactions. The search for the event continues today, and the project proved to be a model for multi-institution physics collaborations.

Vogel credits Boehm with initiating, in the 1980s, the first experiment at a nuclear reactor to look for neutrino oscillations—that is, spontaneous changes of a neutrino's "flavor." (Neutrinos come in three distinct flavors that we are currently aware of: electron neutrino, muon neutrino and tau neutrino based on their association with other subatomic particles.) The experiment, located in Grenoble, France, "was the first of its type, and now that's a huge field," Vogel says. "He was a pioneer of understanding the fact that nuclear reactors are prolific sources of neutrinos, particularly suitable for experiments of this type."

Colleagues describe Boehm as adept at any skill to which he applied himself. For example, in addition to his native language, German, he spoke French, English, and some Italian, and he learned Latin and Greek in school. "He was incredibly well read. On the plane to Europe, he would read Proust in French because he enjoyed that sort of thing," Lee says.

"He certainly didn't micromanage. He did not go in the lab very often, but he had strong technical skills," Fisher says. He recalls a time when the lab's helium leak detector—an old and complicated piece of machinery the size of a washing machine on wheels—broke. "We had it apart because it was broken, and there were vacuum tubes inside, which was completely baffling to us," Fisher says. This was during the 1980s; vacuum tubes in such equipment had been phased out in favor of transistors starting in the '60s. But Boehm was not the sort to simply throw something away that worked well just because of its age, Fisher says. As the graduate students struggled with the antiquated machinery, Boehm walked in and, from the doorway, diagnosed the problem as a "sparky 5Y3 [vacuum tube]."

"He went to a cabinet, and there was a lifetime supply of every part you'd ever need, including 5Y3s. He plugged in the right one, and suddenly the machine worked," Fisher says. "That was very, very Felix."

Boehm's academic career was cut short by the onset of macular degeneration, a progressive disease that robs individuals of their central vision. It affects more than 6 million people globally every year and is the leading cause of vision loss in people aged 50 and older. Unable to efficiently read, Boehm retired in 1995. "He played flute until, in the end, the loss of his eyesight cost him the music, too," Lee says.

But, Lee adds, "Felix never complained. He accepted everything and was totally stoic about what happened." Boehm did, however, refuse to accept that his diminished vision might prevent him from being up to date with the latest in his field and so installed a machine in his house that enlarged the text of the latest published physics papers to a size that he could painstakingly read, a few words at a time.

Boehm, who became Valentine Professor in 1985, was elected to the National Academy of Sciences in 1983 and the American Association for the Advancement of Science in 2006, and was a fellow of the American Physical Society. He received the Alexander von Humboldt Award in 1980 and, in 1995, received the Tom W. Bonner Prize in Nuclear Physics for "his measurements of positron polarization in beta decay and their impact on the development of the V-A theory of weak interactions, his pioneering studies providing convincing evidence for parity violation in nuclear transitions, and his frontier defining searches for violations of time-reversal invariance in nuclei and for neutrino oscillations."

Boehm is survived by his wife, Ruth, and their sons, Marcus and Claude. 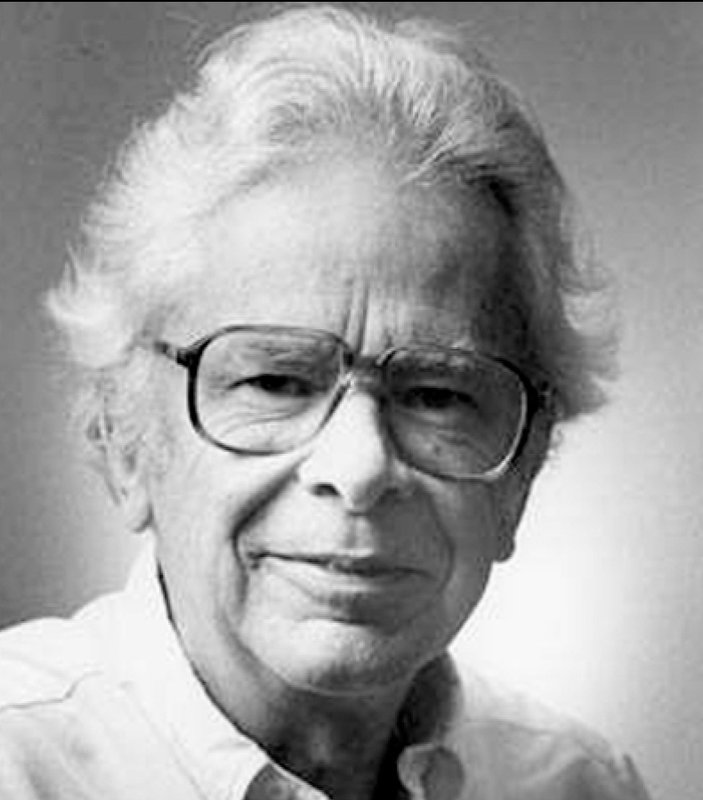