In 2014, the Defense Advanced Research Projects Agency (DARPA) launched the Direct On-Chip Digital Optical Synthesizer (DODOS) program, with the goal of finding a way to synthesize optical frequencies with the same exactness as radio and microwave frequencies. Four years later, that promise is on the verge of paying off—with an important contribution from applied scientists at Caltech.

Radio and microwave frequency synthesis is so fundamental that it can be easily taken for granted. It, for example, enables cellular communications systems to operate at specific frequencies automatically—but a fine level of control is not yet available on a practical level for optical signals.

However, in April, DARPA and the National Institute of Standards and Technology (NIST) announced that a team of researchers including members from NIST, UC Santa Barbara, and Caltech had made significant progress in creating a chip-based means of miniaturizing an optical synthesizer that can emit specific frequencies of light.

"The goal is to shrink laboratory-grade capabilities down to the size of a sugar cube for use in applications like LIDAR, coherent communications, chemical sensing, and precision metrology," according to Gordon Keeler, the DARPA program manager leading DODOS.

Until the creation of devices called optical frequency combs, which won half of the Nobel Prize for Physics in 2005, it was nearly impossible to generate light on demand at an exact frequency with precision, says Caltech's Kerry Vahala, the Ted and Ginger Jenkins Professor of Information Science and Technology and Applied Physics and leader of the Caltech team.

Optical frequency combs use pulses of light from which individual frequencies—colors—can be identified based on the precise timing of the pulses.

However, even with the development of optical frequency combs, optical synthesizers have proven difficult to miniaturize.

The prototype frequency synthesizer technology unveiled in April, however, requires only four microchips, each about 5 millimeters by 10 millimeters in size. The miniature device synthesizes frequencies on demand with about 1 Hertz accuracy, meaning that it faithfully creates specified light frequencies that are accurate to 15 significant digits—that is, to one part in a quadrillion.

The Caltech frequency comb relies on finely constructed optical resonators—basically, circular racetracks for trapped photons that can emit regularly timed pulses of light. To create the finely spaced comb teeth, the Caltech resonator must be about 100 times larger than the NIST device. Its larger size can potentially make this comb very power hungry.

"Too much power in a small space can damage any electronics to which the resonator is connected," Vahala says. "Also, in the future, these synthesizer devices could operate on battery power in smartphone-sized devices where they cannot draw much power."

That is where the Caltech comb shines, so to speak. Its resonator racetrack recirculates the photons hundreds of thousands of times so that specific frequencies can be generated with minimal amounts of power. 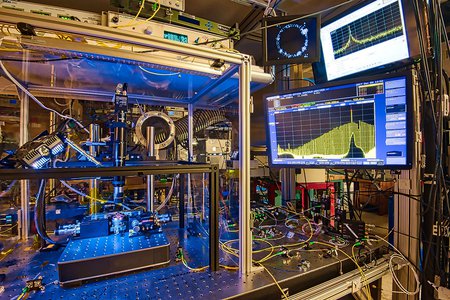 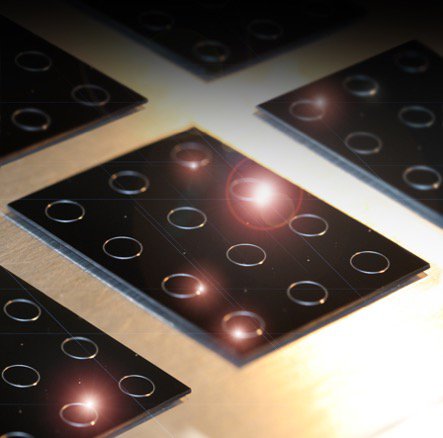 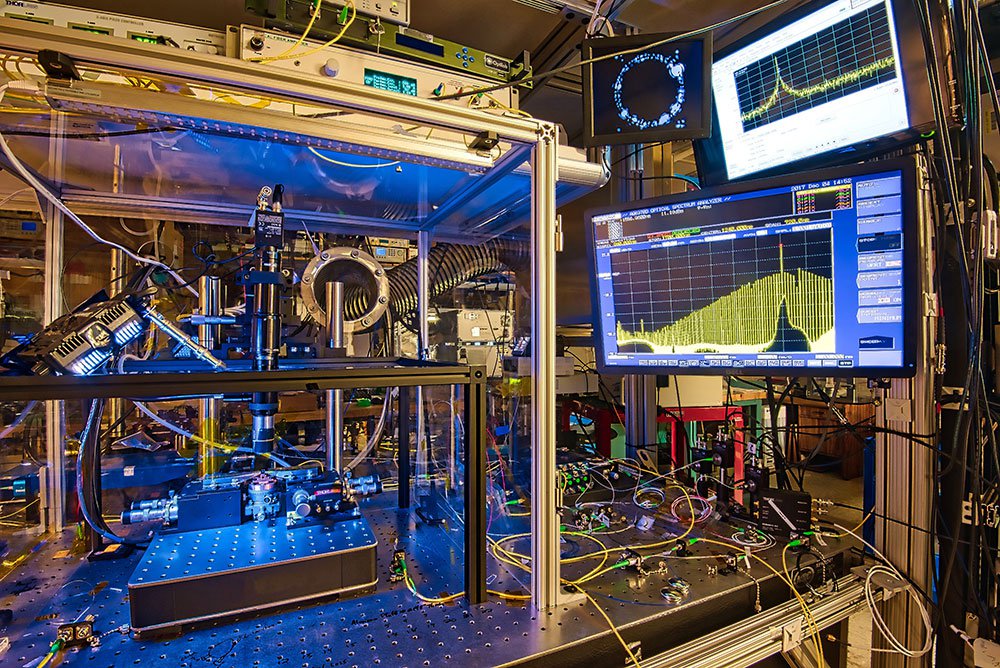