An Equation to Describe the Competition Between Genes

In biology, scientists typically conduct experiments first, and then develop mathematical or computer models afterward to show how the collected data fit with theory. In his work, Rob Phillips flips that practice on its head. The Caltech biophysicist tackles questions in cellular biology as a physicist would—by first formulating a model that can make predictions and then testing those predictions. Using this strategy, Phillips and his group have recently developed a mathematical model that accounts for the way genes compete with each other for the proteins that regulate their expression.

A paper describing the work appears in the current issue of the journal Cell. The lead authors on the paper are Robert Brewster and Franz Weinert, postdoctoral scholars in Phillips's lab.

"The thing that makes this study really interesting is that we did our calculations before we ever did any experiments," says Phillips, the Fred and Nancy Morris Professor of Biophysics and Biology at Caltech and principal investigator on the study. "Just as it is amazing that we have equations for the orbits of planets around stars, I think it's amazing that we are beginning to be able to write equations that predict the complex behaviors of a living cell."

A number of research teams are interested in modeling gene expression—accurately describing all the processes involved in going from a gene to the protein or other product encoded by that DNA. For simplicity's sake, though, most such models do not take competition into consideration. Instead, they assume that each gene has plenty of whatever it needs in order to be expressed—including the regulatory proteins called transcription factors. However, Phillips points out, there often is not enough transcription factor around to regulate all of the genes in a cell.  For one thing, multiple copies of a gene can exist within the same cell. For example, in the case of genes expressed on circular pieces of DNA known as plasmids, it is common to find hundreds of copies in a single cell. In addition, many transcription factors are capable of binding to a variety of different genes. So, as in a game of musical chairs, the genes must compete for a scarce resource—the transcription factors.

Phillips and his colleagues wanted to create a more realistic model by adding in this competition. To do so, they looked at how the level of gene expression varies depending on the amount of transcription factor present in the cell. To limit complexity, they worked with a relatively simple case—a gene in the bacterium E. coli that has just one binding site where a transcription factor can attach. In this case, when the transcription factor binds to the gene, it actually prevents the gene from making its product—it represses expression.

To build their mathematical model, the researchers first considered all the various ways in which the available transcription factor can interact with the copies of this particular gene that are present in the cell, and then developed a statistical theory to represent the situation.

"Imagine that you go into an auditorium, and you know there are a certain number of seats and a certain number of people. There are many different seating arrangements that could accommodate all of those people," Phillips says. "If you wanted to, you could systematically enumerate all of those arrangements and figure out things about the statistics—how often two people will be sitting next to each other if it's purely random, and so on. That's basically what we did with these genes and transcription factors."

Using the resulting model, the researchers were able to make predictions about what would happen if the level of transcription factor and the number of gene copies were independently varied so that the proteins were either in high demand or there were plenty to go around, for example.

The team found that the experimental data matched the predictions they had made extremely well. "As expected, we find that there are two interesting regimes," says Brewster. "One is that there's just not enough protein to fill the demand. Therefore, all copies of the gene cannot be repressed simultaneously, and some portion will glow green all the time. In that case, there are correlations between the various copies of the genes. They know, in some sense, that the others exist. The second case is that there is a ton of this transcription factor around; in that case, the genes act almost exactly as if the other genes aren't there—there is enough protein to shut off all of the genes simultaneously."

The data fit so well with their model, in fact, that Phillips and his colleagues were able to use plots of the data to predict how many copies of the plasmid would be found in a cell as it grew and multiplied at various points throughout the cell cycle.

"Many times in science you start out trying to understand something, and then you get so good at understanding it that you are able to use it as a tool to measure something else," says Phillips. "Our model has become a tool for measuring the dynamics of how plasmids multiply. And the dynamics of how they multiply isn't what we would have naively expected. That's a little hint that we're pursuing right now."

Overall, he says, "this shows that the assertion that biology is too complicated to be predictive might be overly pessimistic, at least in the context of bacteria."

The work described in the paper, "The Transcription Factor Titration Effect Dictates Level of Gene Expression," was supported by the National Institutes of Health and by the Fondation Pierre-Gilles de Gennes. Additional coauthors are Mattias Rydenfelt, a graduate student in physics at Caltech; Hernan Garcia, a former member of Phillips's lab who is now at Princeton University; and Dan Song, a graduate student at Harvard Medical School. 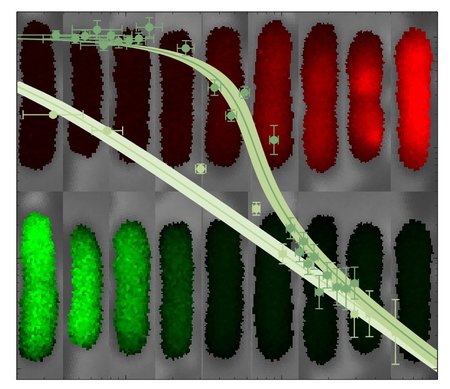 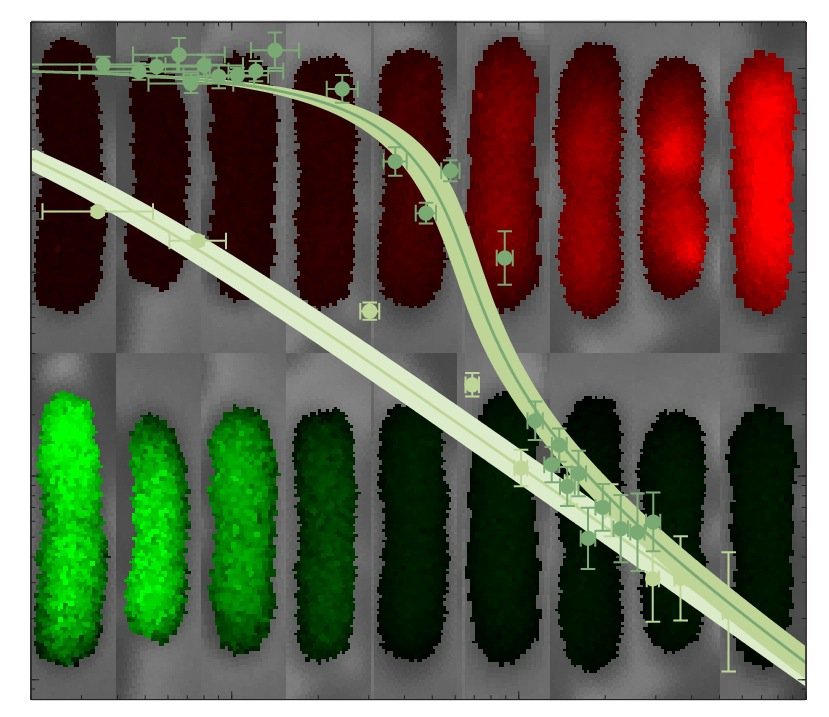 The background images show cells that have been repressed to different extents. Red fluorescence corresponds to the "repressor" transcription factors that turn off the genes that produce the green fluorescent protein. The two graphs in the foreground show the level of green fluorescent protein produced as a function of the level of repressor.
Download Full Image
Subscribe
The Caltech Weekly