A team of engineers and scientists at Caltech and ETH Zurich have developed an artificial skin capable of detecting temperature changes using a mechanism similar to the one used by the organ that allows pit vipers to sense their prey.

The material could be grafted onto prosthetic limbs to restore temperature sensing in amputees. It could also be applied to first-aid bandages to alert health professionals of a temperature increase—a sign of infection—in wounds.

A paper about the new material will be published in Science Robotics on February 1.

While fabricating synthetic woods in a petri dish, a team led by Caltech's Chiara Daraio created a material that exhibited an electrical response to temperature changes in the lab. It turned out that the component responsible for the temperature sensitivity was pectin, a long-chain molecule present in plant cell walls.

"Pectin is widely used in the food industry as a jellifying agent; it's what you use to make jam. So it's easy to obtain and also very cheap," says Daraio, professor of mechanical engineering and applied physics in the Division of Engineering and Applied Science.

Chiara Daraio, professor of mechanical engineering and applied physics in the Division of Engineering and Applied Science, explains how the new temperature-sensitive artificial skin works.

Intrigued, the team shifted its attention to pectin and ultimately created a thin, transparent flexible film of pectin and water, which can be as little as 20 micrometers thick (equivalent to the diameter of a human hair). Pectin molecules in the film have a weakly bonded double-strand structure that contains calcium ions. As temperature increases, these bonds break down and the double strands "unzip," releasing the positively charged calcium ions.

Either the increased concentration of free calcium ions or their increased mobility (likely both, the researchers speculate) results in a decrease in the electrical resistance throughout the material, which can be detected with a multimeter connected to electrodes embedded in the film.

The film senses temperature using a mechanism similar—but not identical—to the pit organs in vipers, which allow the snakes to sense warm prey in the dark by detecting radiated heat. In those organs, ion channels in the cell membrane of sensory nerve fibers expand as temperature increases. This dilation allows calcium ions to flow, triggering electrical impulses.

So far, the skin is capable of detecting these tiny changes across a range of temperatures roughly between 5 to 50 degrees Celsius (about 41 to 158 degrees Fahrenheit), which is useful for robotics and biomedical applications. Next, Daraio's team would like to boost that up to 90 degrees Celsius (194 degrees Fahrenheit). This would make pectin sensors useful for industrial applications, such as thermal sensors in consumer electronics or robotic skins to augment human-robot interactions. To do so, they will need to change the fabrication process they now use to create the material, as that process leads to the presence of water—which tends to bubble or evaporate at high temperatures. 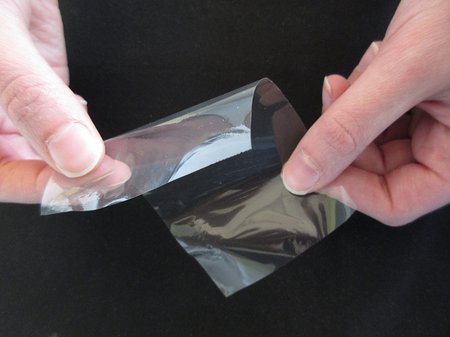 The new material can be as little as 20 micrometers thick, and is both transparent and flexible. Credit: Caltech Chiara Daraio, professor of mechanical engineering and applied physics in the Division of Engineering and Applied Science, explains how the new temperature-sensitive artificial skin works.
Image Lightbox 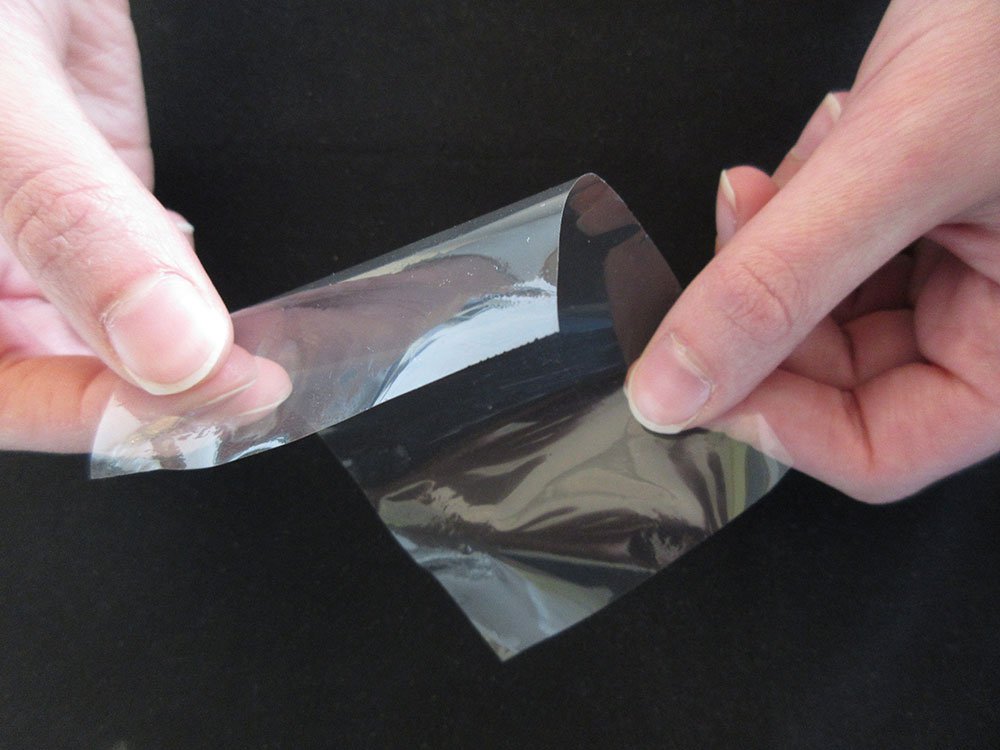 The new material can be as little as 20 micrometers thick, and is both transparent and flexible.
Credit: Caltech
Download Full Image
Subscribe
The Caltech Weekly