Do Fruit Flies Have Emotions?

A fruit fly starts buzzing around food at a picnic, so you wave your hand over the insect and shoo it away. But when the insect flees the scene, is it doing so because it is actually afraid? Using fruit flies to study the basic components of emotion, a new Caltech study reports that a fly's response to a shadowy overhead stimulus might be analogous to a negative emotional state such as fear—a finding that could one day help us understand the neural circuitry involved in human emotion.

The study, which was done in the laboratory of David Anderson, Seymour Benzer Professor of Biology and an investigator with the Howard Hughes Medical Institute, was published online May 14 in the journal Current Biology.

Insects are an important model for the study of emotion; although mice are closer to humans on the evolutionary family tree, the fruit fly has a much simpler neurological system that is easier to study. However, studying emotions in insects or any other animal can also be tricky. Because researchers know the experience of human emotion, they might anthropomorphize those of an insect—just as you might assume that the shooed-away fly left your plate because it was afraid of your hand. But there are several problems with such an assumption, says postdoctoral scholar William T. Gibson, first author of the paper.

"There are two difficulties with taking your own experiences and then saying that maybe these are happening in a fly. First, a fly's brain is very different from yours, and second, a fly's evolutionary history is so different from yours that even if you could prove beyond any doubt that flies have emotions, those emotions probably wouldn't be the same ones that you have," he says. "For these reasons, in our study, we wanted to take an objective approach."

Anderson and Gibson and their colleagues did this by deconstructing the idea of an emotion into basic building blocks—so-called emotion primitives, a concept previously developed by Anderson and Ralph Adolphs, Bren Professor of Psychology and Neuroscience and professor of biology.

"There has been ongoing debate for decades about what 'emotion' means, and there is no generally accepted definition. In an article that Ralph Adolphs and I recently wrote, we put forth the view that emotions are a type of internal brain state with certain general properties that can exist independently of subjective, conscious feelings, which can only be studied in humans," Anderson says. "That means we can study such brain states in animal models like flies or mice without worrying about whether they have 'feelings' or not. We use the behaviors that express those states as a readout."

Gibson explains by analogy that emotions can be broken down into these emotion primitives much as a secondary color, such as orange, can be separated into two primary colors, yellow and red. "And if we can show that fruit flies display all of these separate but necessary primitives, we then may be able to make the argument that they also have an emotion, like fear."

The emotion primitives analyzed in the fly study can be understood in the context of a stimulus associated with human fear: the sound of a gunshot. If you hear a gun fire, the sound may trigger a negative feeling. This feeling, a primitive called valence, will probably cause you to behave differently for several minutes afterward. This is a primitive called persistence. Repeated exposure to the stimulus should also produce a greater emotional response—a primitive called scalability; for example, the sound of 10 gunshots would make you more afraid than the sound of one shot.

Gibson says that another primitive of fear is that it is generalized to different contexts, meaning that if you were eating lunch or were otherwise occupied when the gun fired, the fear would take over, distracting you from your lunch. Trans-situationality is another primitive that could cause you to produce the same fearful reaction in response to an unrelated stimulus—such as the sound of a car backfiring.

The researchers chose to study these five primitives by observing the insects in the presence of a fear-inducing stimulus. Because defensive behavioral responses to overhead visual threats are common in many animals, the researchers created an apparatus that would pass a dark paddle over the flies' habitat. The flies' movements were then tracked using a software program created in collaboration with Pietro Perona, the Allen E. Puckett Professor of Electrical Engineering.

The researchers analyzed the flies' responses to the stimulus and found that the insects displayed all of these emotion primitives. For example, responses were scalable: when the paddle passed overhead, the flies would either freeze, or jump away from the stimulus, or enter a state of elevated arousal, and each response increased with the number of times the stimulus was delivered. And when hungry flies were gathered around food, the stimulus would cause them to leave the food for several seconds and run around the arena until their state of elevated arousal decayed and they returned to the food—exhibiting the primitives of context generalization and persistence.

"These experiments provide objective evidence that visual stimuli designed to mimic an overhead predator can induce a persistent and scalable internal state of defensive arousal in flies, which can influence their subsequent behavior for minutes after the threat has passed," Anderson says. "For us, that's a big step beyond just casually intuiting that a fly fleeing a visual threat must be 'afraid,' based on our anthropomorphic assumptions. It suggests that the flies' response to the threat is richer and more complicated than a robotic-like avoidance reflex."

In the future, the researchers say that they plan to combine the new technique with genetically based techniques and imaging of brain activity to identify the neural circuitry that underlies these defensive behaviors. Their end goal is to identify specific populations of neurons in the fruit fly brain that are necessary for emotion primitives—and whether these functions are conserved in higher organisms, such as mice or even humans.

Although the presence of these primitives suggests that the flies might be reacting to the stimulus based on some kind of emotion, the researchers are quick to point out that this new information does not prove—nor did it set out to establish—that flies can experience fear, or happiness, or anger, or any other feelings.

"Our work can get at questions about mechanism and questions about the functional properties of emotion states, but we cannot get at the question of whether or not flies have feelings," Gibson says.

The study, titled "Behavioral Responses to a Repetitive Stimulus Express a Persistent State of Defensive Arousal in Drosophila," was published in the journal Current Biology. In addition to Gibson, Anderson, and Perona, Caltech coauthors include graduate student Carlos Gonzalez, undergraduate Rebecca Du, former research assistants Conchi Fernandez and Panna Felsen (BS '09, MS '10), and former postdoctoral scholar Michael Maire. Coauthors Lakshminarayanan Ramasamy and Tanya Tabachnik are from the Janelia Research Campus of the Howard Hughes Medical Institute (HHMI). The work was funded by the National Institutes of Health, HHMI, and the Gordon and Betty Moore Foundation. 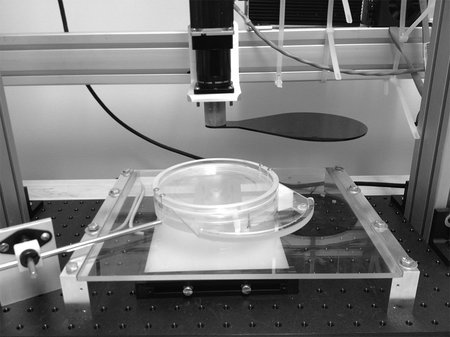 Experimental apparatus, including the walking arena for the flies, and the shadow paddle. Credit: William T. Gibson/Caltech

Freezing and escape in response to an overhead shadow. A single fly walks back and forth, and briefly grooms, before a shadow moves overhead. The fly jumps and freezes in place, its wings and other appendages held motionless. After about 5 seconds, the fly suddenly breaks its freezing posture, and escapes. Credit: William T. Gibson/Caltech 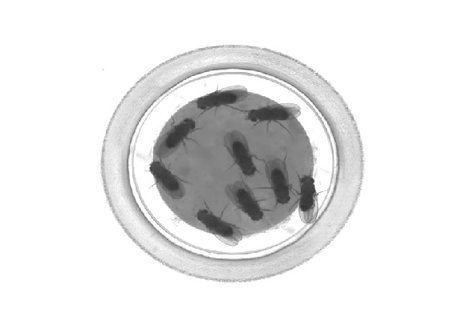 A close-up view of the flies on the food patch. Credit: William T. Gibson/Caltech Freezing and escape in response to an overhead shadow. A single fly walks back and forth, and briefly grooms, before a shadow moves overhead. The fly jumps and freezes in place, its wings and other appendages held motionless. After about 5 seconds, the fly suddenly breaks its freezing posture, and escapes. Flies responding to the shadow while on food. Credit: Reprinted from Current Biology, In Press, Gibson et al., Behavioral Responses to a Repetitive Visual Threat Stimulus Express a Persistent State of Defensive Arousal in Drosophila, Copyright 2015, with permission from Elsevier.
Image Gallery Lightbox 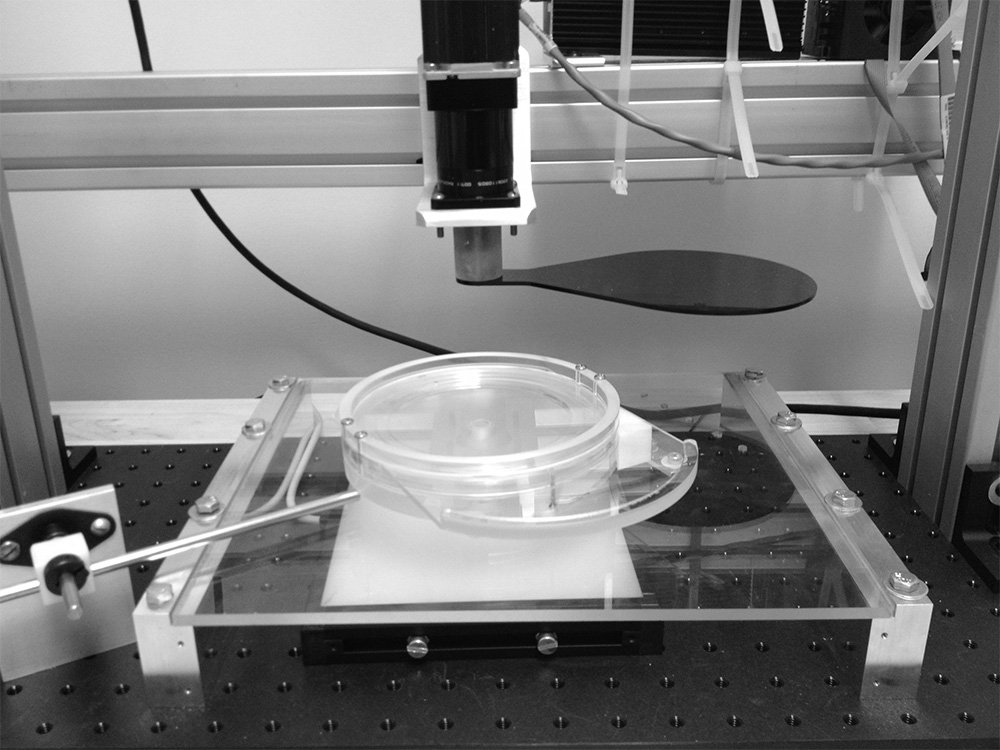 Experimental apparatus, including the walking arena for the flies, and the shadow paddle.
Credit: William T. Gibson/Caltech
Download Full Image

Freezing and escape in response to an overhead shadow. A single fly walks back and forth, and briefly grooms, before a shadow moves overhead. The fly jumps and freezes in place, its wings and other appendages held motionless. After about 5 seconds, the fly suddenly breaks its freezing posture, and escapes.
Credit: William T. Gibson/Caltech
Download Full Image 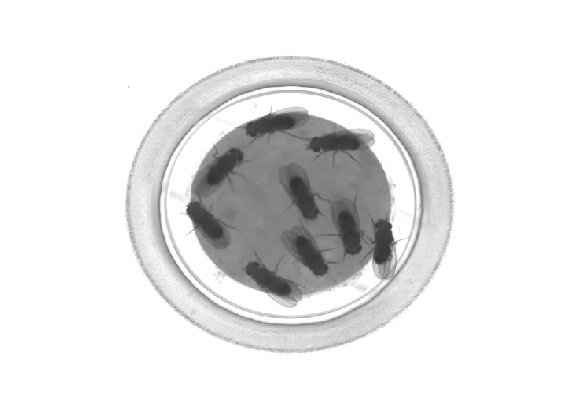