Discovering a New Stage in the Galactic Lifecycle

On its own, dust seems fairly unremarkable. However, by observing the clouds of gas and dust within a galaxy, astronomers can determine important information about the history of star formation and the evolution of galaxies. Now thanks to the unprecedented sensitivity of the telescope at the Atacama Large Millimeter Array (ALMA) in Chile, a Caltech-led team has been able to observe the dust contents of galaxies as seen just 1 billion years after the Big Bang—a time period known as redshift 5-6. These are the earliest average-sized galaxies to ever be directly observed and characterized in this way.

The work is published in the June 25 edition of the journal Nature.

Dust in galaxies is created by the elements released during the formation and collapse of stars. Although the most abundant elements in the universe—hydrogen and helium—were created by the Big Bang, stars are responsible for making all of the heavier elements in the universe, such as carbon, oxygen, nitrogen, and iron. And because young, distant galaxies have had less time to make stars, these galaxies should contain less dust. Previous observations had suggested this, but until now nobody could directly measure the dust in these faraway galaxies.

"Before we started this study, we knew that stars formed out of these clouds of gas and dust, and we knew that star formation was probably somehow different in the early universe, where dust is likely less common. But the previous information only really hinted that the properties of the gas and the dust in earlier galaxies were different than in galaxies we see around us today. We wanted to find data that showed that," says Peter Capak, a staff scientist at the Infrared Processing and Analysis Center (IPAC) at Caltech and the first author of the study.

Armed with the high sensitivity of ALMA, Capak and his colleagues set out to perform a direct analysis of the dust in these very early galaxies.

Young, faraway galaxies are often difficult to observe because they appear very dim from Earth. Previous observations of these young galaxies, which formed just 1 billion years after the Big Bang, were made with the Hubble Space Telescope and the W. M. Keck Observatory—both of which detect light in the near-infrared and visible bands of the electromagnetic spectrum. The color of these galaxies at these wavelengths can be used to make inferences about the dust—for example, galaxies that appear bluer in color tend to have less dust, while those that are red have more dust. However, other effects like the age of the stars and our distance from the galaxy can mimic the effects of dust, making it difficult to understand exactly what the color means.

The researchers began their observations by first analyzing these early galaxies with the Keck Observatory. Keck confirmed the distance from the galaxies as redshift greater than 5—verifying that the galaxies were at least as young as they previously had been thought to be. The researchers then observed the same galaxies using ALMA to detect light at the longer millimeter and submillimeter wavelengths of light. The ALMA readings provided a wealth of information that could not be seen with visible-light telescopes, including details about the dust and gas content of these very early galaxies.

Capak and his colleagues were able to use ALMA to—for the first time—directly view the dust and gas clouds of nine average-sized galaxies during this epoch. Specifically, they focused on a feature called the carbon II spectral line, which comes from carbon atoms in the gas around newly formed stars. The carbon line itself traces this gas, while the data collected around the carbon line traces a so-called continuum emission, which provides a measurement of the dust. The researchers knew that the carbon line was bright enough to be seen in mature, dust-filled nearby galaxies, so they reasoned that the line would be even brighter if there was indeed less dust in the young faraway galaxies.

Using the carbon line, their results confirmed what had previously been suggested by the data from Hubble and Keck: these older galaxies contained, on average, 12 times less dust than galaxies from 2 billion years later (at a redshift of approximately 4).

"In galaxies like our Milky Way or nearby Andromeda, all of the stars form in very dusty environments, so more than half of the light that is observed from young stars is absorbed by the dust," Capak says. "But in these faraway galaxies we observed with ALMA, less than 20 percent of the light is being absorbed. In the local universe, only very young galaxies and very odd ones look like that. So what we're showing is that the normal galaxy at these very high redshifts doesn't look like the normal galaxy today. Clearly there is something different going on."

That "something different" gives astronomers like Capak a peek into the lifecycle of galaxies. Galaxies form because gas and dust are present and eventually turn into stars—which then die, creating even more gas and dust, and releasing energy. Because it is impossible to watch this evolution from young galaxy to old galaxy happen in real time on the scale of a human lifespan, the researchers use telescopes like ALMA to take a survey of galaxies at different evolutionary stages. Capak and his colleagues believe that this lack of dust in early galaxies signifies a never-before-seen evolutionary stage for galaxies.

"This result is really exciting. It's the first time that we're seeing the gas that the stars are forming out of in the early universe. We are starting to see the transition from just gas to the first generation of galaxies to more mature systems like those around us today. Furthermore, because the carbon line is so bright, we can now easily find even more distant galaxies that formed even longer ago, sooner after the Big Bang," Capak says.

Lin Yan, a staff scientist at IPAC and coauthor on the paper, says that their results are also especially important because they represent typical early galaxies. "Galaxies come in different sizes. Earlier observations could only spot the largest or the brightest galaxies, and those tend to be very special—they actually appear very rarely in the population," she says. "Our findings tell you something about a typical galaxy in that early epoch, so they're results can be observed as a whole, not just as special cases."

Yan says that their ability to analyze the properties of these and earlier galaxies will only expand with ALMA's newly completed capabilities. During the study, ALMA was operating with only a portion of its antennas, 20 at the time; the capabilities to see and analyze distant galaxies will be further improved now that the array is complete with 66 antennas, Yan adds.

"This is just an initial observation, and we've only just started to peek into this really distant universe at redshift of a little over 5. An astronomer's dream is basically to go as far distant as we can. And when it's complete, we should be able to see all the distant galaxies that we've only ever dreamed of seeing," she says.

The findings are published in a paper titled, "Galaxies at redshifts 5 to 6 with systematically low dust content and high [C II] emission." The work was supported by funds from NASA and the European Union's Seventh Framework Program. Nick Scoville, the Francis L. Moseley Professor of Astronomy, was an additional coauthor on this paper. In addition to Keck, Hubble, and ALMA data, observations from the Spitzer Space Telescope were used to measure the stellar mass and age of the galaxies in this study. Coauthors and collaborators from other institutions include C. Carilli, G. Jones, C.M. Casey, D. Riechers, K. Sheth, C.M. Corollo, O. Ilbert, A. Karim, O. LeFevre, S. Lilly, and V. Smolcic. 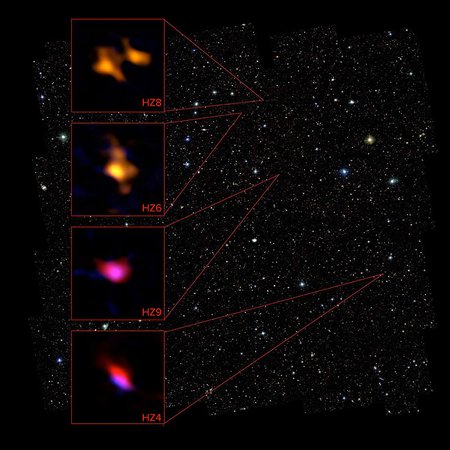 Using ALMA, astronomers surveyed an array of normal galaxies seen when the Universe was only 1 billion years old. They detected the glow of ionized carbon filling the space between the stars, indicating these galaxies were fully formed but chemically immature, when compared to similar galaxies a few billion years later. The ALMA data for four of these galaxies is show in relation to objects in the COSMOS field taken with the Hubble Space Telescope. Credit: ALMA (NRAO/ESO/NAOJ), P. Capak; B. Saxton (NRAO/AUI/NSF), NASA/ESA Hubble
Image Lightbox 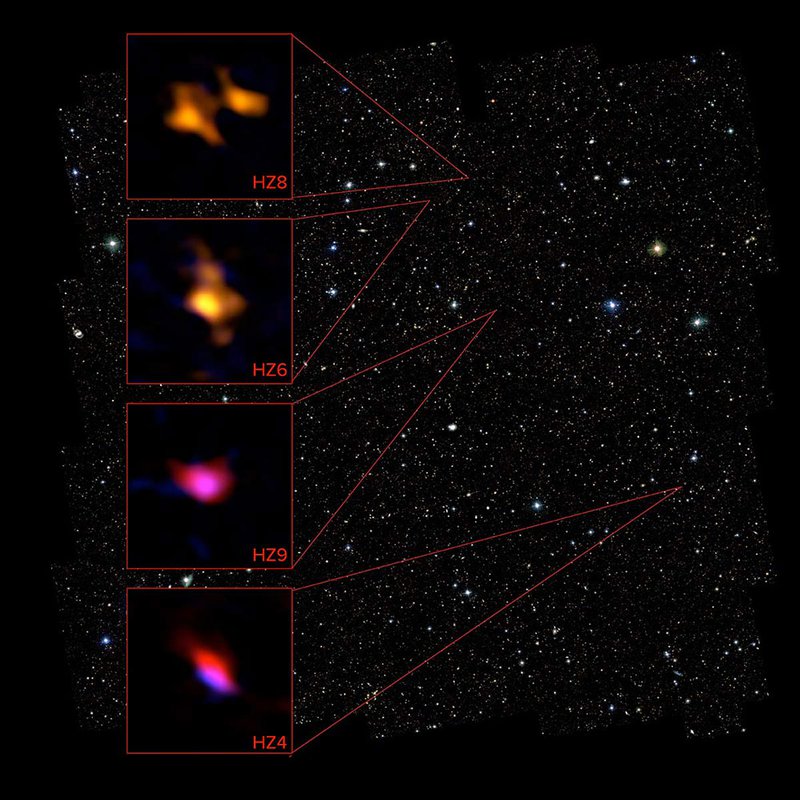 Using ALMA, astronomers surveyed an array of normal galaxies seen when the Universe was only 1 billion years old. They detected the glow of ionized carbon filling the space between the stars, indicating these galaxies were fully formed but chemically immature, when compared to similar galaxies a few billion years later. The ALMA data for four of these galaxies is show in relation to objects in the COSMOS field taken with the Hubble Space Telescope.
Credit: ALMA (NRAO/ESO/NAOJ), P. Capak; B. Saxton (NRAO/AUI/NSF), NASA/ESA Hubble
Download Full Image
Subscribe
The Caltech Weekly