Developing a Picture of the Earth's Mantle

Deep inside the earth, seismic observations reveal that three distinct structures make up the boundary between the earth's metallic core and overlying silicate mantle at a depth of about 2,900 kilometers—an area whose composition is key to understanding the evolution and dynamics of our planet. These structures include remnants of subducted plates that originated near the earth's surface, ultralow-velocity zones believed to be enriched in iron, and large dense provinces of unknown composition and mineralogy. A team led by Caltech's Jennifer Jackson, professor of mineral physics has new evidence for the origin of these features that occur at the core-mantle boundary.

"We have discovered that bridgmanite, the most abundant mineral on our planet, is a reasonable candidate for the material that makes up these dense provinces that occupy about 20 percent of the core-mantle boundary surface, and rise up to a depth of about 1,500 kilometers. Integrated by volume that's about the size of our moon!" says Jackson, coauthor of a study that outlines these findings and appears online in the Journal of Geophysical Research: Solid Earth. "This finding represents a breakthrough because although bridgmanite is the earth's most abundant mineral, we only recently have had the ability to precisely measure samples of it in an environment similar to what we think the materials are experiencing inside the earth."

Previously, says Jackson, it was not clear whether bridgmanite, a perovskite structured form of (Mg,Fe)SiO3, could explain seismic observations and geodynamic modeling efforts of these large dense provinces. She and her team show that indeed they do, but these structures need to be propped up by external forces, such as the pinching action provided by cold and dense subducted slabs at the base of the mantle.

Jackson, along with then Caltech graduate student Aaron Wolf (PhD '13), now a research scientist at the University of Michigan at Ann Arbor, and researchers from Argonne National Laboratory, came to these conclusions by taking precise X-ray measurements of synthetic bridgmanite samples compressed by diamond anvil cells to over 1 million times the earth's atmospheric pressure and heated to thousands of degrees Celsius.

The measurements were done utilizing two different beamlines at the Advanced Photon Source of Argonne National Laboratory in Illinois, where the team used powerful X-rays to measure the state of bridgmanite under the physical conditions of the earth's lower mantle to learn more about its stiffness and density under such conditions. The density controls the buoyancy—whether or not these bridgmanite provinces will lie flat on the core-mantle boundary or rise up. This information allowed the researchers to compare the results to seismic observations of the core-mantle boundary region.

"With these new measurements of bridgmanite at deep-mantle conditions, we show that these provinces are very likely to be dense and iron-rich, helping them to remain stable over geologic time," says Wolf.

Using a technique known as synchrotron Mössbauer spectroscopy, the team also measured the behavior of iron in the crystal structure of bridgmanite, and found that iron-bearing bridgmanite remained stable at extreme temperatures (more than 2,000 degrees Celsius) and pressure (up to 130 gigapascals). There had been some reports that iron-bearing bridgmanite breaks down under extreme conditions, but the team found no evidence for any breakdown or reactions.

"This is the first study to combine high-accuracy density and stiffness measurements with Mössbauer spectroscopy, allowing us to pinpoint iron's behavior within bridgmanite," says Wolf. "Our results also show that these provinces cannot possibly contain a large complement of radiogenic elements, placing strong constraints on their origin. If present, these radiogenic elements would have rapidly heated and destabilized the piles, contradicting many previous simulations that indicate that they are likely hundreds of millions of years old."

In addition, the experiments suggest that the rest of the lower mantle is not 100 percent bridgmanite as had been previously suggested. "We've shown that other phases, or minerals, must be present in the mantle to satisfy average geophysical observations," says Jackson. "Until we made these measurements, the thermal properties were not known with enough precision and accuracy to uniquely constrain the mineralogy."

"There is still a lot of work to be done, such as identifying the dynamics of subducting slabs, which we believe plays a role in providing an external force to shape these large bridgmanite provinces," she says. "We know that the earth did not start out this way. The provinces had to evolve within the global system, and we think these findings may help large-scale geodynamic modeling that involves tectonic plate reconstructions."

The results of the study were published in a paper titled "The thermal equation of state of (Mg,Fe)SiO3 bridgmanite (perovskite) and implications for lower mantle structures." In addition to Jackson and Wolf, other authors on the study are Przemeslaw Dera and Vitali B. Prakapenka from the Center for Advanced Radiation Sources at Argonne National Laboratory. Support for this research was provided by the National Science Foundation, the Turner Postdoctoral Fellowship at the University of Michigan, and the California Institute of Technology. 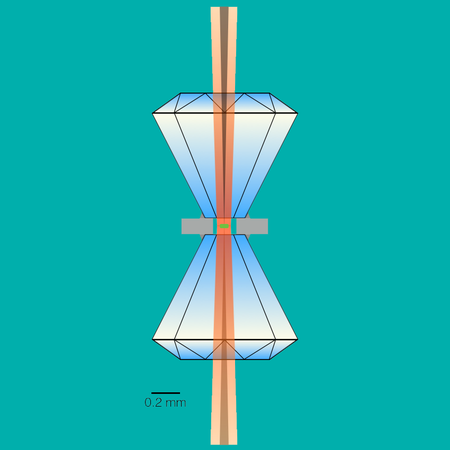 This illustration shows a bridgmanite sample that is being laser-heated between two diamond anvils. This set-up allows researchers to measure a sample at compressions over 1 million times the earth's atmospheric pressure, while being heated to thousands of degrees Celsius. Credit: Aaron Wolf and Jennifer Jackson, Caltech 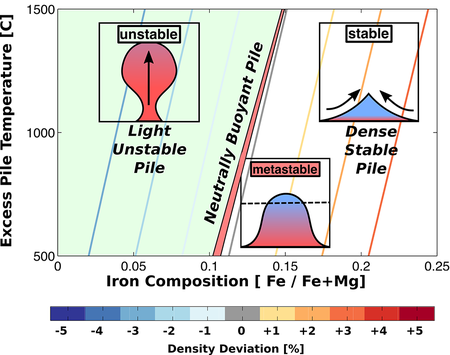 This schematic shows different scenarios of bridgmanite provinces that Jennifer Jackson and colleagues explored in their research. Their results found that the scenario at right aligns most closely with geophysical constraints of the lower mantle. Credit: Aaron Wolf and Jennifer Jackson, Caltech
Image Gallery Lightbox 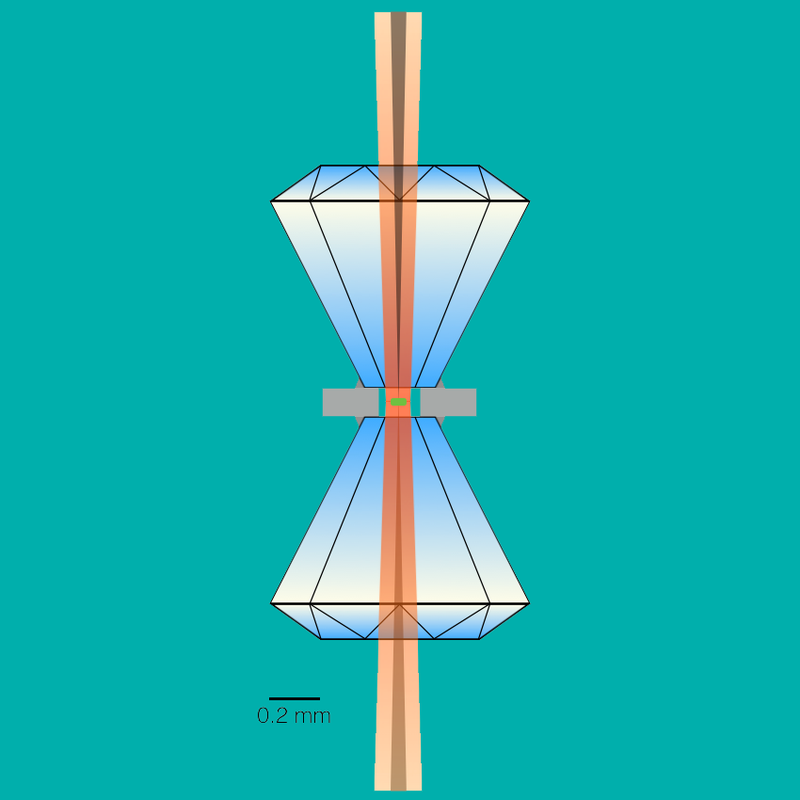 This illustration shows a bridgmanite sample that is being laser-heated between two diamond anvils. This set-up allows researchers to measure a sample at compressions over 1 million times the earth's atmospheric pressure, while being heated to thousands of degrees Celsius.
Credit: Aaron Wolf and Jennifer Jackson, Caltech
Download Full Image 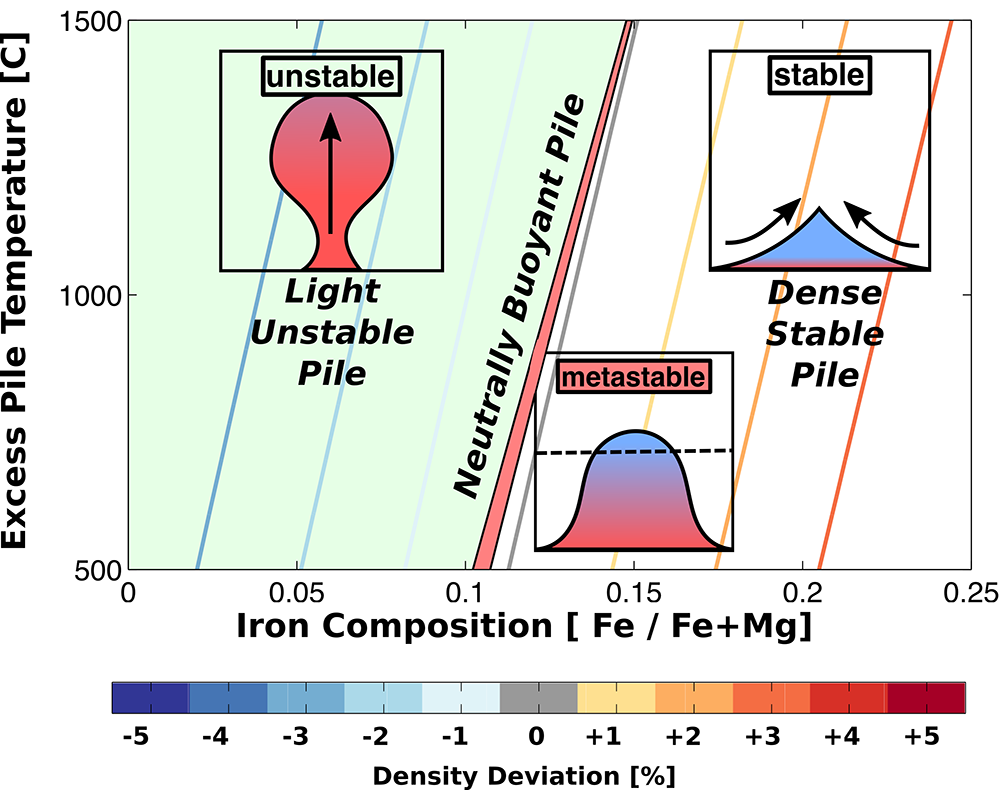 This schematic shows different scenarios of bridgmanite provinces that Jennifer Jackson and colleagues explored in their research. Their results found that the scenario at right aligns most closely with geophysical constraints of the lower mantle.
Credit: Aaron Wolf and Jennifer Jackson, Caltech
Download Full Image