Developing the Next Generation of Microsensors

PASADENA, Calif.—Imagine navigating through a grocery store with your cell phone. As you turn down the bread aisle, ads and coupons for hot dog buns and English muffins pop up on your screen. The electronics industry would like to make such personal navigators a reality, but, to do so, they need the next generation of microsensors.

Thanks to an ultrasensitive accelerometer—a type of motion detector—developed by researchers at the California Institute of Technology (Caltech) and the University of Rochester, this new class of microsensors is a step closer to reality. Beyond consumer electronics, such sensors could help with oil and gas exploration deep within the earth, could improve the stabilization systems of fighter jets, and could even be used in some biomedical applications where more traditional sensors cannot operate.

Caltech professor of applied physics Oskar Painter and his team describe the new device and its capabilities in an advance online publication of the journal Nature Photonics.

Rather than using an electrical circuit to gauge movements, their accelerometer uses laser light. And despite the device's tiny size, it is an extremely sensitive probe of motion. Thanks to its low mass, it can also operate at a large range of frequencies, meaning that it is sensitive to motions that occur in tens of microseconds, thousands of times faster than the motions that the most sensitive sensors used today can detect.

"The new engineered structures we made show that optical sensors of very high performance are possible, and one can miniaturize them and integrate them so that they could one day be commercialized," says Painter, who is also codirector of Caltech's Kavli Nanoscience Institute.

Although the average person may not notice them, microchip accelerometers are quite common in our daily lives. They are used in vehicle airbag deployment systems, in navigation systems, and in conjunction with other types of sensors in cameras and cell phones. They have successfully moved into commercial use because they can be made very small and at low cost.

Accelerometers work by using a sensitive displacement detector to measure the motion of a flexibly mounted mass, called a proof mass. Most commonly, that detector is an electrical circuit. But because laser light is one of the most sensitive ways to measure position, there has been interest in making such a device with an optical readout. For example, projects such as the Laser Interferometer Gravitational-Wave Observatory (LIGO) rely on optical interferometers, which use laser light reflecting off mirrors separated by kilometers of distance to sensitively measure relative motion of the end mirrors. Lasers can have very little intrinsic noise—meaning that their intensity fluctuates little—and are typically limited by the quantum properties of light itself, so they make it much easier to detect very small movements.

People have tried, with limited success, to make miniature versions of these large-scale interferometers. One stumbling block for miniaturization has been that, in general, the larger the proof mass, the larger the resulting motion when the sensor is accelerated. So it is typically easier to detect accelerations with larger sensors. Also, when dealing with light rather than electrons—as in optical accelerometers—it is a challenge to integrate all the components (the lasers, detectors, and interferometer) into a micropackage.

"What our work really shows is that we can take a silicon microchip and scale this concept of a large-scale optical interferometer all the way down to the nanoscale," Painter says. "The key is this little optical cavity we engineered to read out the motion."

The optical cavity is only about 20 microns (millionths of a meter) long, a single micron wide, and a few tenths of a micron thick. It consists of two silicon nanobeams, situated like the two sides of a zipper, with one side attached to the proof mass. When laser light enters the system, the nanobeams act like a "light pipe," guiding the light into an area where it bounces back and forth between holes in the nanobeams. When the tethered proof mass moves, it changes the gap between the two nanobeams, resulting in a change in the intensity of the laser light being reflected out of the system. The reflected laser signal is in fact tremendously sensitive to the motion of the proof mass, with displacements as small as a few femtometers (roughly the diameter of a proton) being probed on the timescale of a second.

"Most sensors are completely limited by thermal noise, or mechanical vibrations—they jiggle around at room temperature, and applied accelerations get lost in that noise," Painter says. "In our device, the light applies a force that tends to reduce the thermal motion, cooling the system." This cooling—down to a temperature of three kelvins (about –270°C) in the current devices—increases the range of accelerations that the device can measure, making it capable of measuring both extremely small and extremely large accelerations.

"We made a very sensitive sensor that, at the same time, can also measure very large accelerations, which is valuable in many applications," Painter says.

The team envisions its optical accelerometers becoming integrated with lasers and detectors in silicon microchips. Microelectronics companies have been working for the past 10 or 15 years to try to integrate lasers and optics into their silicon microelectronics. Painter says that a lot of engineering work still needs to be done to make this happen, but adds that "because of the technological advancements that have been made by these companies, it looks like one can actually start making microversions of these very sensitive optical interferometers."

"Professor Painter's research in this area nicely illustrates how the Engineering and Applied Science faculty at Caltech are working at the edges of fundamental science to invent the technologies of the future," says Ares Rosakis, chair of Caltech's Division of Engineering and Applied Science.  "It is very exciting to envision the ways this research might transform the microelectronics industry and our daily lives."

The lead authors on the paper, titled "A high-resolution microchip optomechanical accelerometer," have all worked in Painter's lab. Alexander Krause and Tim Blasius are currently graduate students at Caltech, while Martin Winger is a former postdoctoral scholar who now works for a sensor company called Sensirion in Zurich, Switzerland. This work was performed in collaboration with Qiang Lin, a former postdoctoral scholar of the Painter group, who now leads his own research group at the University of Rochester. The work is supported by the Defense Advanced Research Projects Administration QuASaR program, the National Science Foundation Graduate Research Fellowship Program, and Intellectual Ventures. 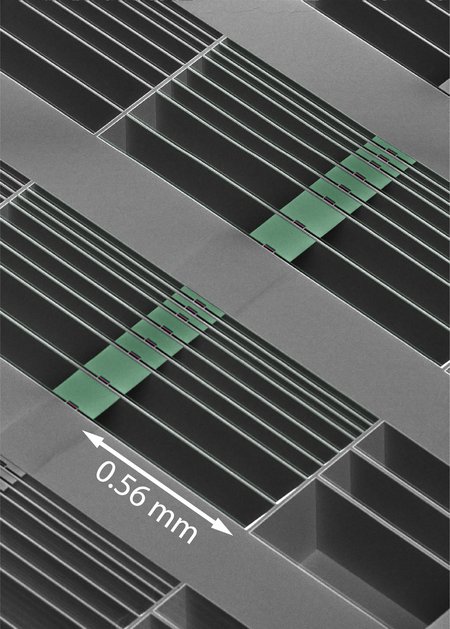 Scanning electron microscope image of an array of optomechanical accelerometer devices formed in the surface of a silicon microchip. Highlighted green areas represent proof masses which are suspended by nanoscale tethers across the open etched areas of the chip. Even smaller, and barely visible, are pink highlighted optical cavities which sensitively read out the motion of the proof masses. Credit: Martin Winger
Image Lightbox 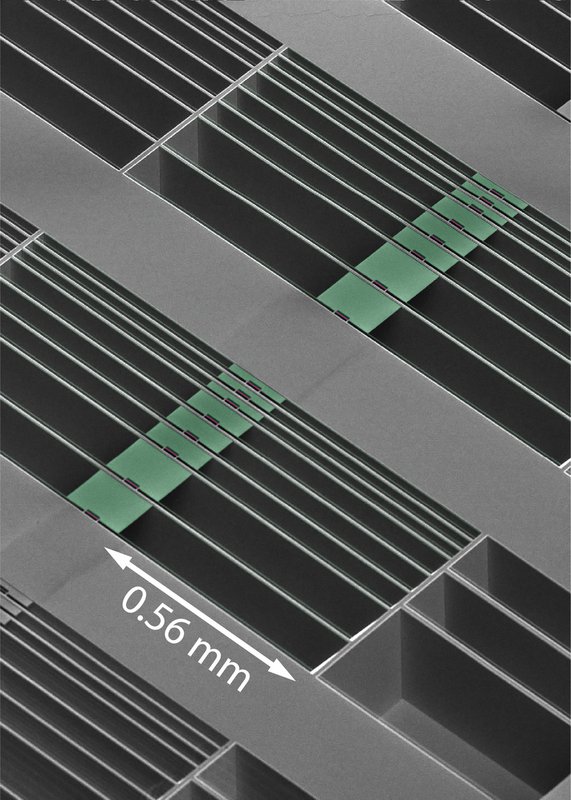 Scanning electron microscope image of an array of optomechanical accelerometer devices formed in the surface of a silicon microchip. Highlighted green areas represent proof masses which are suspended by nanoscale tethers across the open etched areas of the chip. Even smaller, and barely visible, are pink highlighted optical cavities which sensitively read out the motion of the proof masses.
Credit: Martin Winger
Download Full Image
Subscribe
The Caltech Weekly