A Detailed Look at HIV in Action

The human intestinal tract, or gut, is best known for its role in digestion. But this collection of organs also plays a prominent role in the immune system. In fact, it is one of the first parts of the body that is attacked in the early stages of an HIV infection. Knowing how the virus infects cells and accumulates in this area is critical to developing new therapies for the over 33 million people worldwide living with HIV. Researchers at the California Institute of Technology (Caltech) are the first to have utilized high-resolution electron microscopy to look at HIV infection within the actual tissue of an infected organism, providing perhaps the most detailed characterization yet of HIV infection in the gut.

The team's findings are described in the January 30 issue of PLOS Pathogens.

"Looking at a real infection within real tissue is a big advance," says Mark Ladinsky, an electron microscope scientist at Caltech and lead author of the paper. "With something like HIV, it's usually very difficult and dangerous to do because the virus is an infectious agent. We used an animal model implanted with human tissue so we can study the actual virus under, essentially, its normal circumstances."

Ladinsky worked with Pamela Bjorkman, Max Delbrück Professor of Biology at Caltech, to take three-dimensional images of normal cells along with HIV-infected tissues from the gut of a mouse model engineered to have a human immune system. The team used a technique called electron tomography, in which a tissue sample is embedded in plastic and placed under a high-powered microscope. Then the sample is tilted incrementally through a course of 120 degrees, and pictures are taken of it at one-degree intervals. All of the images are then very carefully aligned with one another and, through a process called back projection, turned into a 3-D reconstruction that allows different places within the volume to be viewed one pixel at a time.

By procuring such detailed images, Ladinsky and Bjorkman were able to confirm several observations of HIV made in prior, in vitro studies, including the structure and behavior of the virus as it buds off of infected cells and moves into the surrounding tissue and structural details of HIV budding from cells within an infected tissue. The team also described several novel observations, including the existence of "pools" of HIV in between cells, evidence that HIV can infect new cells both by direct contact or by free viruses in the same tissue, and that pools of HIV can be found deep in the gut.

"The study suggests that an infected cell releases newly formed viruses in a semisynchronous wave pattern," explains Ladinsky. "It doesn't look like one virus buds off and then another in a random way. Rather, it appears that groups of virus bud off from a given cell within a certain time frame and then, a little while later, another group does the same, and then another, and so on."

The team came to this conclusion by identifying single infected cells using electron microscopy. Then they looked for HIV particles at different distances from the original cell and saw that the groups of particles were more mature as their distance from the infected cell increased.

"This finding showed that indeed these cells were producing waves of virus rather than individual ones, which was a neat observation," says Ladinsky.

In addition to producing waves of virus, infected cells are also thought to spread HIV through direct contact with their neighbors. Bjorkman and Ladinsky were able to visualize this phenomenon, known as a virological synapse, using electron microscopy.

"We were able to see one cell producing a viral bud that is contacting the cell next to it, suggesting that it's about to infect directly," Ladinsky says. "The space between those two cells represents the virological synapse."

Finally, the team found pools of HIV accumulating between cells where there was no indication of a virological synapse. This suggested that a virological synapse, which may be protected from some of the body's immune defenses, is not the only way in which HIV can infect new cells. The finding of HIV transfer via free pools of free virus offers hope that treatment with protein-based drugs, such as antibodies, could be an effective means of augmenting or replacing current treatment regimens that use small-molecule antiretroviral drugs.

"We saw these pools of virus in places where we had not initially expected to see them, down deep in the intestine," he explains. "Most of the immune cells in the gut are found higher up, so finding large amounts of the virus in the crypt regions was surprising."

The team will continue their efforts to look at HIV and related viruses under natural conditions using additional animal models, and potentially people.

"The end goal is to look at a native infection in human tissue to get a real picture of how it's working inside the body, and hopefully make a positive difference in fighting this epidemic," says Bjorkman.

Additional authors on the PLOS Pathogens paper, "Electron Tomography of HIV-1 Infection in Gut-Associated Lymphoid Tissue," are Collin Kieffer, a postdoctoral scholar in biology at Caltech; Gregory Olson and Douglas S. Kwon from the Ragon Institute of Massachusetts General Hospital (MGH), MIT, and Harvard; and Maud Deruaz, Vladimir Vrbanac, and Andrew M. Tager from MGH and Harvard Medical School. The work was supported by the Center for the Structural Biology of Cellular Host Elements in Egress, Trafficking and Assembly of HIV (CHEETAH). 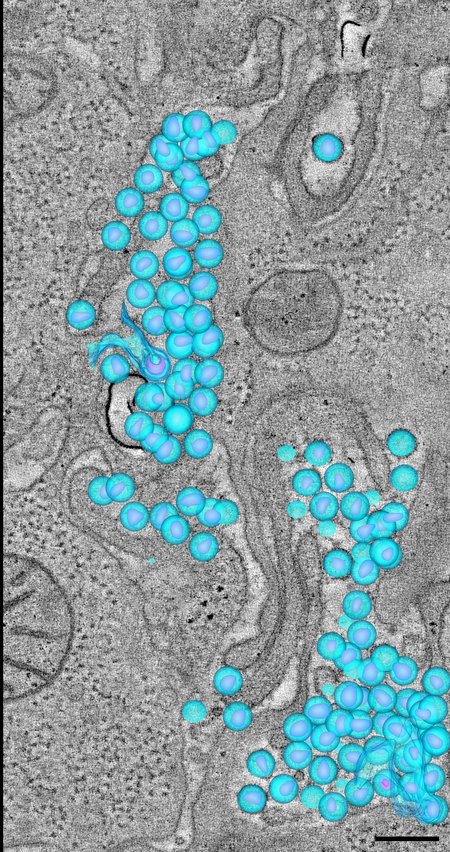 A tomographic reconstruction of the colon shows the location of large pools of HIV-1 virus particles (in blue) located in the spaces between adjacent cells. The purple objects within each sphere represent the conical cores that are one of the structural hallmarks of the HIV virus. Credit: Mark Ladinsky/Caltech
Image Lightbox 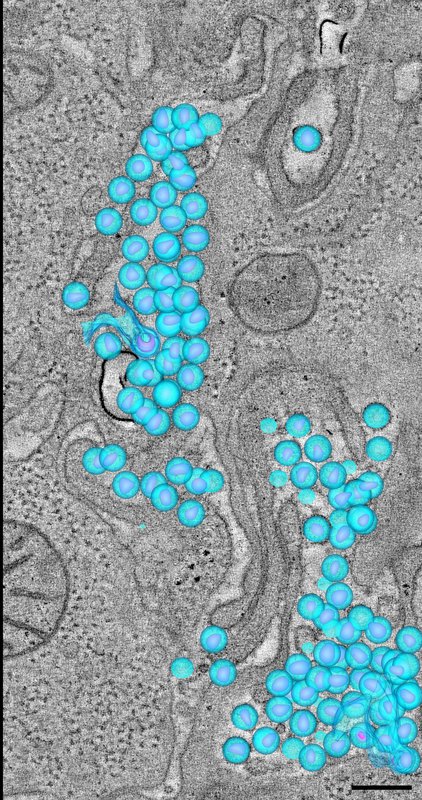 A tomographic reconstruction of the colon shows the location of large pools of HIV-1 virus particles (in blue) located in the spaces between adjacent cells. The purple objects within each sphere represent the conical cores that are one of the structural hallmarks of the HIV virus.
Credit: Mark Ladinsky/Caltech
Download Full Image
Subscribe
The Caltech Weekly