The Advanced LIGO Project, a major upgrade that will increase the sensitivity of the Laser Interferometer Gravitational-wave Observatories instruments by a factor of 10 and provide a 1,000-fold increase in the number of astrophysical candidates for gravitational wave signals, was officially dedicated today in a ceremony held at the LIGO Hanford facility in Richland, Washington.

LIGO was designed and is operated by Caltech and MIT, with funding from the National Science Foundation (NSF). Advanced LIGO, also funded by the NSF, will begin its first searches for gravitational waves in the fall of this year.

"We've spent the past seven years putting together the most sensitive gravitational-wave detector ever built. Commissioning the detectors has gone extremely well thus far, and we are looking forward to our first science run with Advanced LIGO beginning later in 2015.  This is a very exciting time for the field," says Caltech's David H. Reitze, executive director of the LIGO Project.

"Advanced LIGO represents a critically important step forward in our continuing effort to understand the extraordinary mysteries of our universe," says Córdova. "It gives scientists a highly sophisticated instrument for detecting gravitational waves, which we believe carry with them information about their dynamic origins and about the nature of gravity that cannot be obtained by conventional astronomical tools."

"This is a particularly thrilling event, marking the opening of a new window on the universe, one that will allow us to see the final cataclysmic moments in the lives of stars that would otherwise be invisible to us," says Soifer.

Predicted by Albert Einstein in 1916 as a consequence of his general theory of relativity, gravitational waves are ripples in the fabric of space and time produced by violent events in the distant universe—for example, by the collision of two black holes or by the cores of supernova explosions. Gravitational waves are emitted by accelerating masses much in the same way as radio waves are produced by accelerating charges, such as electrons in antennas. As they travel to Earth, these ripples in the space-time fabric bring with them information about their violent origins and about the nature of gravity that cannot be obtained by other astronomical tools.

Although they have not yet been detected directly, the influence of gravitational waves on a binary pulsar system (two neutron stars orbiting each other) has been measured accurately and is in excellent agreement with the predictions. Scientists therefore have great confidence that gravitational waves exist. But a direct detection will confirm Einstein's vision of the waves and allow a fascinating new window into cataclysms in the cosmos.

LIGO was originally proposed as a means of detecting these gravitational waves. Each of the 4-km-long L-shaped LIGO interferometers (one each at LIGO Hanford and at the LIGO observatory in Livingston, Louisiana) use a laser split into two beams that travel back and forth down long arms (which are beam tubes from which the air has been evacuated). The beams are used to monitor the distance between precisely configured mirrors. According to Einstein's theory, the relative distance between the mirrors will change very slightly when a gravitational wave passes by.

The original configuration of LIGO was sensitive enough to detect a change in the lengths of the 4-km arms by a distance one-thousandth the size of a proton; this is like accurately measuring the distance from Earth to the nearest star—3 light years—to within the width of a human hair. Advanced LIGO, which will utilize the infrastructure of LIGO, will be 10 times more sensitive.

Included in the upgrade were changes in the lasers (180-watt highly stabilized systems), optics (40-kg fused-silica "test mass" mirrors suspended by fused-silica fibers), seismic isolation systems (using inertial sensing and feedback), and in how the microscopic motion (less than one billionth of one billionth of a meter) of the test masses is detected.

The change of more than a factor of 10 in sensitivity also comes with a significant increase in the sensitive frequency range. This will allow Advanced LIGO to look at the last minutes of the life of pairs of massive black holes as they spiral closer, coalesce into one larger black hole, and then vibrate much like two soap bubbles becoming one. It will also allow the instrument to pinpoint periodic signals from the many known pulsars that radiate in the range from 500 to 1,000 Hertz (frequencies that correspond to high notes on an organ).

Advanced LIGO will also be used to search for the gravitational cosmic background—allowing tests of theories about the development of the universe only 10-35 seconds after the Big Bang.

Several international partners including the Max Planck Institute for Gravitational Physics, the Albert Einstein Institute, the Laser Zentrum Hannover, and the Leibniz Universität Hannover in Germany; an Australian consortium of universities, led by the Australian National University and the University of Adelaide, and supported by the Australian Research Council; partners in the United Kingdom funded by the Science and Technology Facilities Council; and the University of Florida and Columbia University, provided significant contributions of equipment, labor, and expertise. 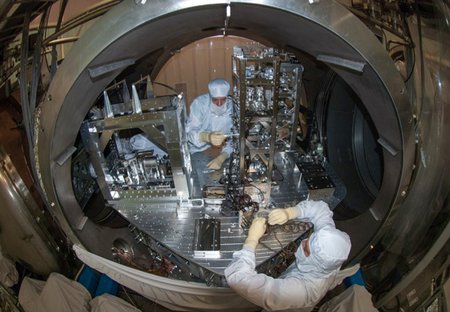 Researchers installing some of the small suspended LIGO mirrors in the vacuum system. Credit: Courtesy of LIGO Laboratory 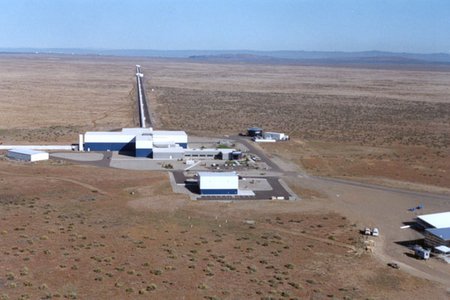 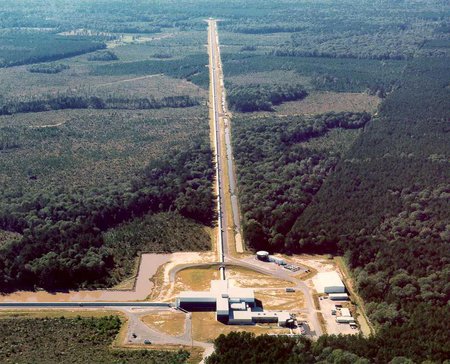 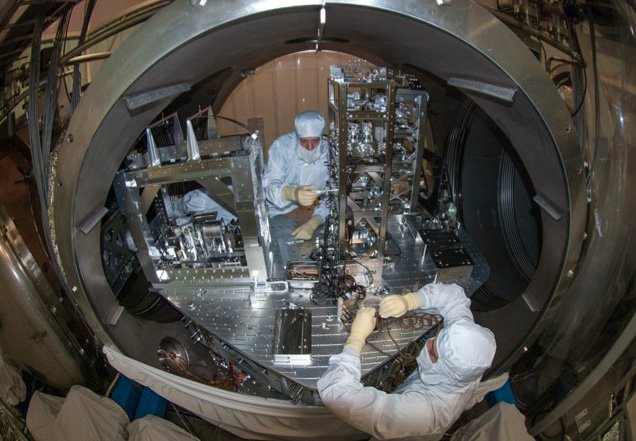 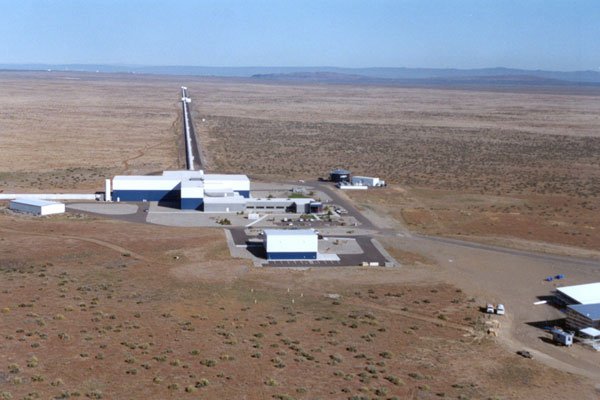 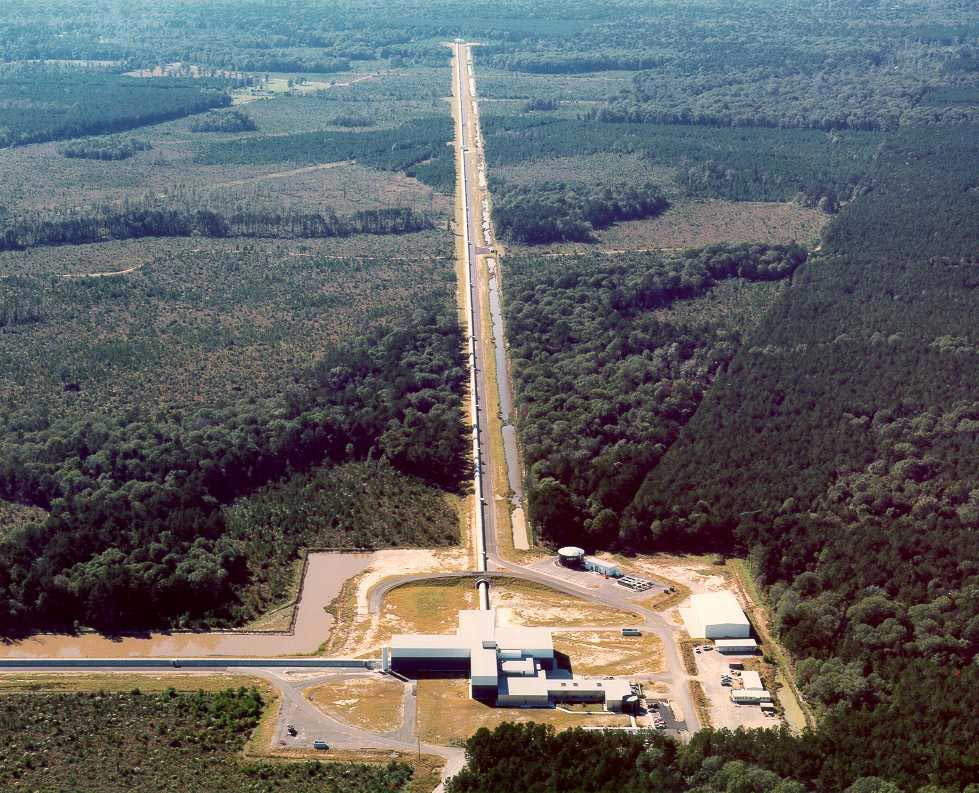