Curious Tilt of the Sun Traced to Undiscovered Planet

Planet Nine—the undiscovered planet at the edge of the solar system that was predicted by the work of Caltech's Konstantin Batygin and Mike Brown in January 2016—appears to be responsible for the unusual tilt of the sun, according to a new study.

The large and distant planet may be adding a wobble to the solar system, giving the appearance that the sun is tilted slightly.

"Because Planet Nine is so massive and has an orbit tilted compared to the other planets, the solar system has no choice but to slowly twist out of alignment," says Elizabeth Bailey, a graduate student at Caltech and lead author of a study announcing the discovery.

All of the planets orbit in a flat plane with respect to the sun, roughly within a couple degrees of each other. That plane, however, rotates at a six-degree tilt with respect to the sun—giving the appearance that the sun itself is cocked off at an angle. Until now, no one had found a compelling explanation to produce such an effect. "It's such a deep-rooted mystery and so difficult to explain that people just don't talk about it," says Brown, the Richard and Barbara Rosenberg Professor of Planetary Astronomy.

Brown and Batygin's discovery of evidence that the sun is orbited by an as-yet-unseen planet—that is about 10 times the size of Earth with an orbit that is about 20 times farther from the sun on average than Neptune's—changes the physics. Planet Nine, based on their calculations, appears to orbit at about 30 degrees off from the other planets' orbital plane—in the process, influencing the orbit of a large population of objects in the Kuiper Belt, which is how Brown and Batygin came to suspect a planet existed there in the first place.

"It continues to amaze us; every time we look carefully we continue to find that Planet Nine explains something about the solar system that had long been a mystery," says Batygin, an assistant professor of planetary science.

Their findings have been accepted for publication in an upcoming issue of the Astronomical Journal, and will be presented on October 18 at the American Astronomical Society's Division for Planetary Sciences annual meeting, held in Pasadena.

The tilt of the solar system's orbital plane has long befuddled astronomers because of the way the planets formed: as a spinning cloud slowly collapsing first into a disk and then into objects orbiting a central star.

Planet Nine's unusual orbit, however, adds a multi-billion-year wobble to that system. Mathematically, given the hypothesized size and distance of Planet Nine, a six-degree tilt fits perfectly, Brown says.

The next question, then, is how did Planet Nine achieve its unusual orbit? Though that remains to be determined, Batygin suggests that the planet may have been ejected from the neighborhood of the gas giants by Jupiter, or perhaps may have been influenced by the gravitational pull of other stellar bodies in the solar system's extreme past.

For now, Brown and Batygin continue to work with colleagues throughout the world to search the night sky for signs of Planet Nine along the path they predicted in January. That search, Brown says, may take three years or more. 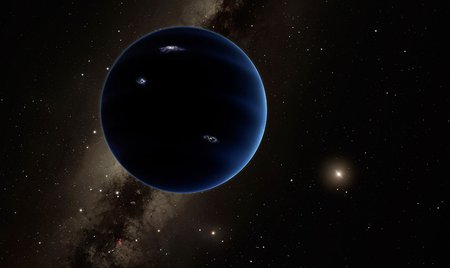 This artistic rendering shows the distant view from Planet Nine back towards the sun. The planet is thought to be gaseous, similar to Uranus and Neptune. Hypothetical lightning lights up the night side. Credit: Caltech/R. Hurt (IPAC) Credit: Caltech
Image Lightbox 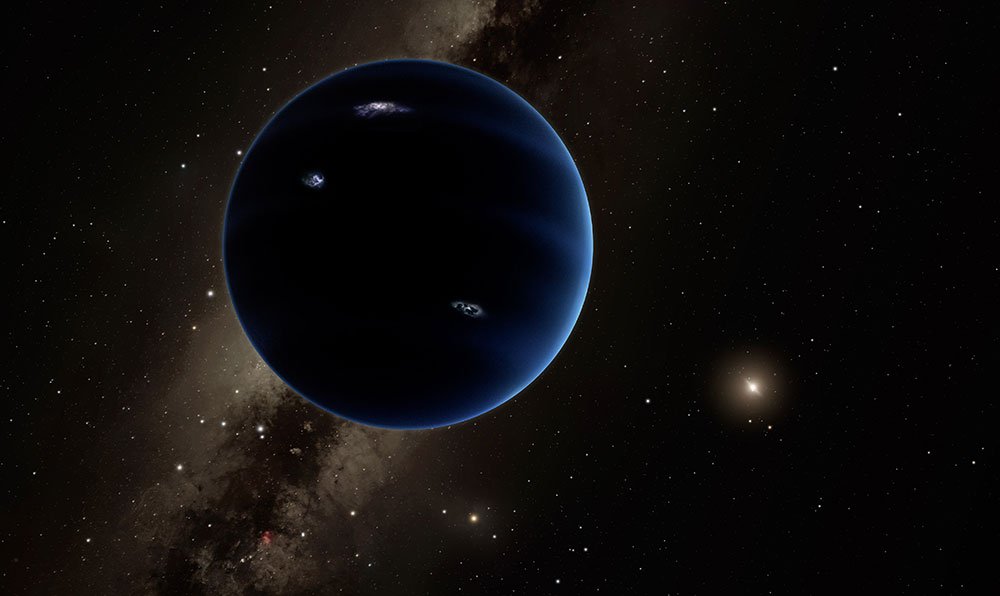 This artistic rendering shows the distant view from Planet Nine back towards the sun. The planet is thought to be gaseous, similar to Uranus and Neptune. Hypothetical lightning lights up the night side.
Credit: Caltech/R. Hurt (IPAC)
Download Full Image
Subscribe
The Caltech Weekly