Humanity's reliance on fossil fuels is often thought of in the context of energy, but petroleum and natural gas are also important sources of raw materials for the manufacture of commodity chemicals. In concert with efforts to develop sustainable sources of energy, like wind and solar, there has been an increasing push to develop technologies that allow the production of chemicals from renewable resources.

A new technology developed by researchers at Caltech and the University of Toronto aims to do just that by using renewable energy to convert carbon dioxide (CO2), one of the major greenhouse gases, into ethylene, a widely used chemical precursor to make, for example polyethylene, the world's most commonly used plastic.

Previous findings at Caltech by the research groups of Theodor Agapie (PhD '07), professor of chemistry, and Jonas Peters, Bren Professor of Chemistry and director of the Resnick Sustainability Institute, showed that organic molecules known as arylpyridiniums help a copper electrode selectively convert CO2 into fuel precursors containing multiple carbon atoms, such as ethanol, ethylene, and propanol. To improve this technology, Agapie and Peters partnered with professor Edward Sargent at the University of Toronto. Combining arylpyridiniums with a much higher surface-area copper electrocatalyst previously developed in the Sargent group, the researchers were able to convert CO2 into ethylene with the highest efficiencies ever reported to date.

"Achieving high selectivities for desirable C-C coupled products from the electroreduction of CO2 has been challenging," Agapie says. "Taking advantage of expertise from a multidisciplinary team, this study demonstrates that ethylene, a particularly useful molecule, can be made in high yields under mild conditions."

Lead authors Fengwang Li, postdoctoral scholar at the University of Toronto, and Arnaud Thevenon and Alonso Rosas-Hernández, postdoctoral scholars at Caltech, screened a variety of arylpyridiniums to optimize the copper electrocatalyst. Together, the Caltech and University of Toronto teams used a combination of laboratory work and computer simulations to explore the possible role of the arylpyridiniums for enhancing the efficiency and lifetime of the electrocatalytic system.

"Essential to translating fundamental discoveries in the arena of solar fuels to real-world applications is demonstrating that industrially relevant current densities can be achieved and sustained over prolonged periods," Peters says. "That is an emphasis of this study."

Funding for the research was provided by the Ontario Research Fund; the Natural Sciences and Engineering Research Council of Canada; the CIFAR Bio-Inspired Solar Energy Program; and the Joint Center for Artificial Photosynthesis, a U.S. Department of Energy DOE Energy Innovation Hub. 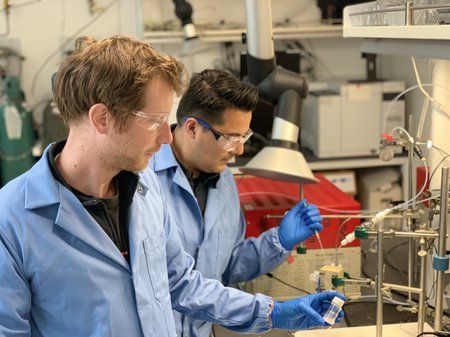