PASADENA, Calif.—Scientists have long dreamed of creating a quantum computer—a device rooted in the bizarre phenomena that transpire at the level of the very small, where quantum mechanics rules the scene. It is believed that such new computers could process currently unsolvable problems in seconds.

Researchers have tried using various quantum systems, such as atoms or ions, as the basic, transistor-like units in simple quantum computation devices. Now, laying the groundwork for an on-chip optical quantum network, a team of researchers, including Andrei Faraon from the California Institute of Technology (Caltech), has shown that defects in diamond can be used as quantum building blocks that interact with one another via photons, the basic units of light.

The device is simple enough—it involves a tiny ring resonator and a tunnel-like optical waveguide, which both funnel light. Both structures, each only a few hundred nanometers wide, are etched in a diamond membrane and positioned close together atop a glass substrate. Within the resonator lies a nitrogen-vacancy center (NV center)—a defect in the structure of diamond in which a nitrogen atom replaces a carbon atom, and in which a nearby spot usually reserved for another carbon atom is simply empty. Such NV centers are photoluminescent, meaning they absorb and emit photons.

"These NV centers are like the building blocks of the network, and we need to make them interact—like having an electrical current connecting one transistor to another," explains Faraon, lead author on a paper describing the work in the New Journal of Physics. "In this case, photons do that job."

In recent years, diamond has become a heavily researched material for use in quantum photonic devices in part because the diamond lattice is able to protect impurities from excessive interactions. The so-called quietness it affords enables impurities—such as NV centers—to store information unaltered for relatively long periods of time.

To begin their experiment, the researchers first cool the device below 10 Kelvin (−441.67 degrees Fahrenheit) and then shine green laser light on the NV center, causing it to reach an excited state and then emit red light. As the red light circles within the resonator, it constructively interferes with itself, increasing its intensity. Slowly, the light then leaks into the nearby waveguide, which channels the photons out through gratings at either end, scattering the light out of the plane of the chip.

The emitted photons have the property of being correlated, or entangled, with the NV center from which they came. This mysterious quality of entanglement, which makes two quantum states inextricably linked in such a way that any information you learn about one provides information about the other, is a necessary ingredient for quantum computation. It enables a large amount of information to be stored and processed by fewer components that take up a small amount of space.

And that's important because, in order to make a quantum computer, you would need millions—maybe billions—of these units. "As you can see, we're just working at making one or a few," Faraon says. "But there are other applications down the line that are easier to achieve." For example, a quantum network with a couple hundred units could simulate the behavior of a complex molecule—a task that conventional computers struggle with.

Going forward, Faraon plans to investigate whether other materials can behave similarly to diamond in an optical quantum network.

In addition to Faraon, the authors on the paper, "Quantum photonic devices in single-crystal diamond," are Charles Santori, Zhihong Huang, Kai-Mei Fu, Victor Acosta, David Fattal, and Raymond Beausoleil of Hewlett-Packard Laboratories, in Palo Alto, California. Fu is now an assistant professor at the University of Washington in Seattle, Washington. The work was supported by the Defense Advanced Research Projects Agency and The Regents of the University of California. 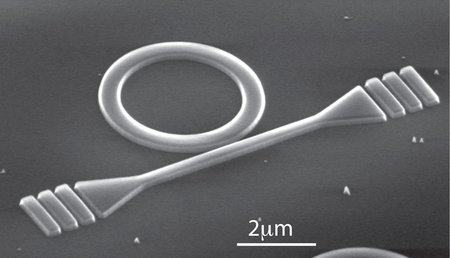 A scanning electron microscope image of one of the quantum photonic devices Andrei Faraon and his colleagues created. It features a micro-ring resonator coupled to a waveguide. Credit: Faraon/Caltech
Image Lightbox 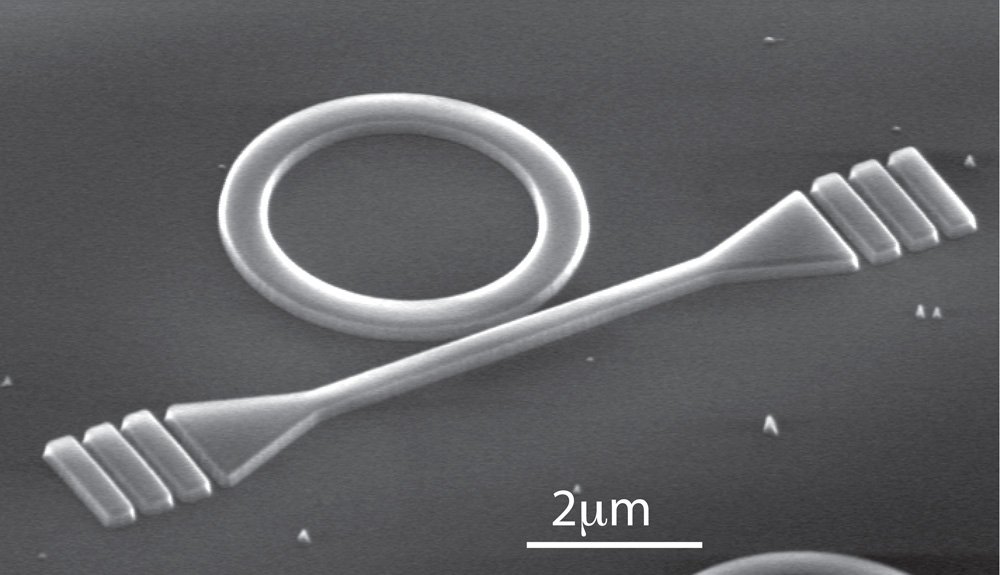 A scanning electron microscope image of one of the quantum photonic devices Andrei Faraon and his colleagues created. It features a micro-ring resonator coupled to a waveguide.
Credit: Faraon/Caltech
Download Full Image
Subscribe
The Caltech Weekly