Researchers have long wondered what mechanisms and motives underlie altruism and what can be done to increase generous behavior. Looking for new insights in these basic questions, Caltech researchers used functional brain imaging to study neural activity in test subjects during generous or selfish choices that involve monetary rewards. They found that altruistic behavior could be explained and predicted by a simple computational model in which individuals make choices by weighting the impact of their decisions on themselves and others.

A paper about the work appears in the July 15 issue of the journal Neuron.

"Generosity does not have to be a difficult decision," says study lead Cendri Hutcherson, an assistant professor at the University of Toronto. Indeed, altruism becomes easier, the study found, when decision-makers consider how their actions will benefit the other person. The study also found that quick decisions led to more generous behavior— and less financial gain for the person making the choices.

Hutcherson conducted the work as a postdoctoral researcher in the laboratory of Antonio Rangel (BS '93), the Bing Professor of Neuroscience, Behavioral Biology, and Economics at Caltech.

Past research has supported seemingly opposing views about whether or not altruism is an innate behavior or one that requires effort. For example, some psychologists argue that human beings are intrinsically selfish. Others say that we are by nature prosocial and only selfish when we take time to realize we can get away with selfishness. And still others argue that willpower plays a role in altruism—in other words, that we need to exercise self-control to be generous. But the question remains open, and just what mechanisms in the brain affect this kind of decision-making has been unclear.

To find out, Hutcherson, Rangel, and colleague Benjamin Bushong (PhD '13), a visiting professor at the Harvard Business School, used functional magnetic resonance imaging (fMRI) to examine the brain activity of 51 subjects as they decided to make either generous or selfish choices under a variety of conditions.

The decisions of the subjects resulted in either financial gain or loss for themselves or another person, who would remain anonymous to the subject. The amount of money in question ranged from $0 to $100.

The study falls within the scope of a discipline known as neuroeconomics, which seeks to characterize the computations made by the brain to make different classes of decisions as well as the neural circuits that implement those computations.

The researchers used an experimental paradigm from economics called the Dictator Game. They asked the subjects to choose between actions that either result in their own economic gain, in a financial reward for another person, or some combination of the two. For example, the subject might be asked to sacrifice $25 so that the other person might gain $100. If the proposal was rejected there was a default award of $50 for each. To keep the decision making simple, subjects were given a four-second limit in which to make their choices.

The study was also able to determine under what circumstances generous choices occurred and whether they were made more rapidly than selfish ones or vice versa.

Academics have long debated the origins and biological underpinnings of altruism. "One of the big debates has been about whether human beings are, by nature, selfish and require self-control or willpower in order to inhibit these selfish impulses," Hutcherson says. "Some people have suggested that if a generous choice is faster, it is automatic, intuitive, and that you didn't need self-control to do it. If, however, more time is required to make a generous choice, that would be evidence that we have to override our selfish tendencies to be generous—that it takes more mental 'machinery.'"

"You can come up with counterexamples to either argument," Hutcherson explains. "We have all had experiences where it felt hard to be nice to others, but we can also come up with examples where people have been extraordinarily altruistic. You hear about people who run into burning buildings to save complete strangers and said that they didn't give it a second thought. The question of why people can make these choices without really thinking is a complex one.

In the experiments, the researchers found that participants were willing to sacrifice money to help the other person an average of 21 percent of the time—even though the identity of recipient of the cash award was unknown to the test subject.

Recorded fMRI scans of the subjects' brains, taken while they made their decisions, suggested that different brain areas represent one's own and others' interests. Self-oriented values correlated with activity in the ventral striatum, an area linked to basic reward processing. Other-oriented values correlated with activation of the temporoparietal junction, which has been implicated in empathy. Hutcherson believes this is evidence that people are more likely to give away resources if they already have in mind how their donation will benefit someone else.

The study also indicates that self-control may be less of a factor in altruistic decision making than previously thought. Rather, the more one considers the well-being of another, the easier it is to behave generously. Alternatively, the more one focuses on one's own well-being, the more difficult altruistic choices become.

"Our data show that the sense of gratification from acting generously comes from knowing that you only had to give up a little bit to help someone else a lot," Hutcherson says. "If we can highlight the utility of an action that is fairly trivial for ourselves—for example, the notion that for the price of a cup of coffee you can help a starving child—the model predicts that people will be more likely to behave generously. But if you have to give up a lot to give another person only a small benefit, that's not so motivating. The satisfaction to the giver has to be worth the sacrifice."

Hutcherson notes that such research may help to reveal how people can be encouraged to act more often in the interest of others and may have broader applications in many areas of human behavior, including charitable giving, military training, and criminal rehabilitation.

The work in the paper, titled "A neurocomputational model of altruistic choice and its implications," was funded by the National Science Foundation, the Gordon and Betty Moore Foundation, and the Lipper Foundation. 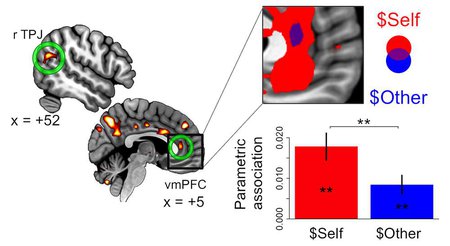 Different brain regions value money for oneself and others separately. Other areas combine these values to make a generous choice. Credit: Rangel Neuroeconomics Laboratory/Caltech 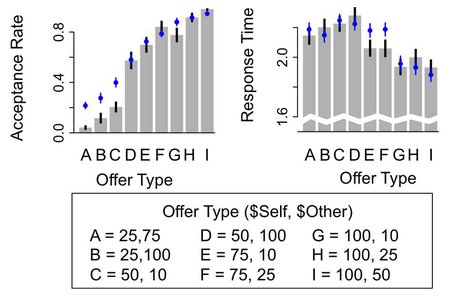 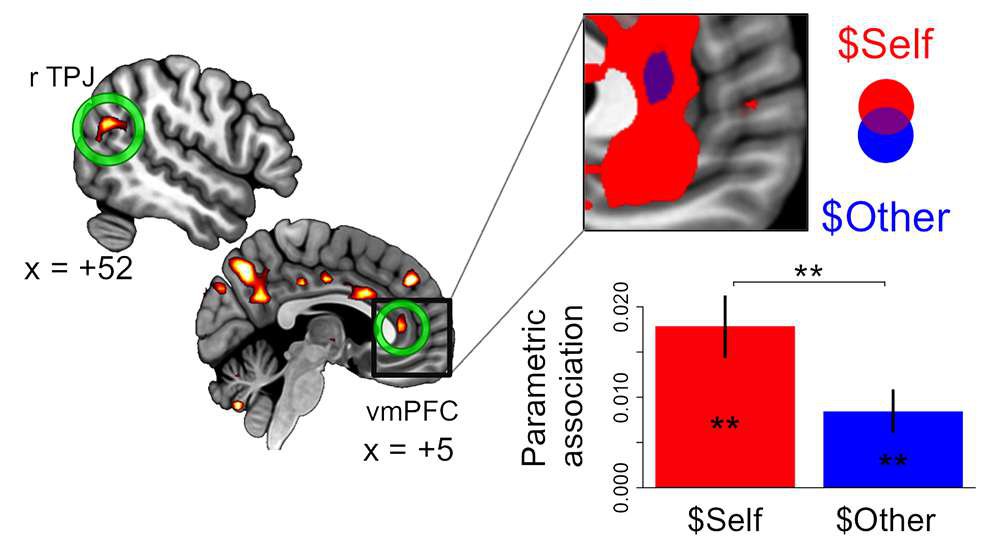 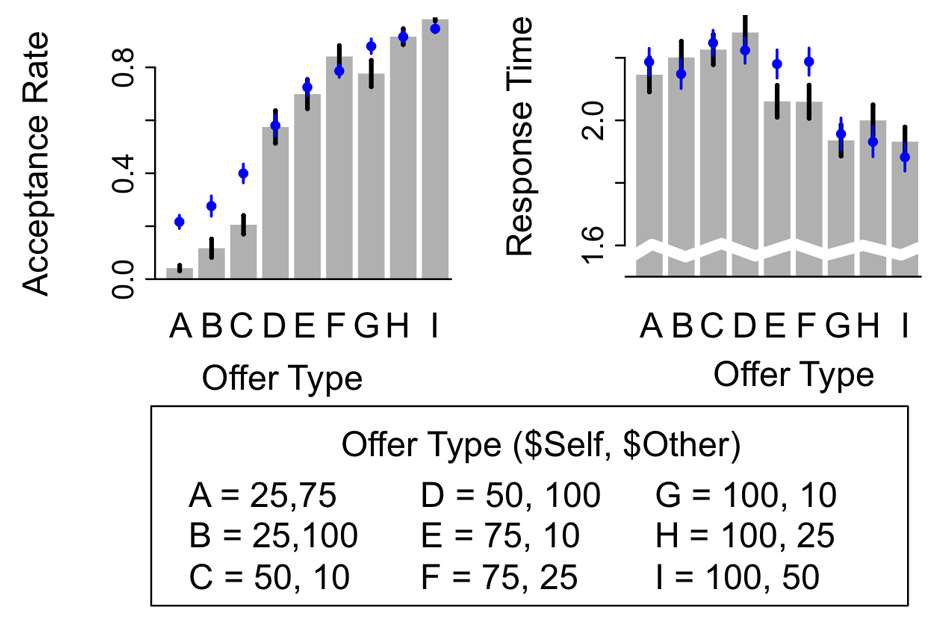