Last week, Caltech's Institute for Quantum Information and Matter (IQIM) honored the legacy and contributions of theoretical physicist Richard Feynman, marking 50 years since he received the Nobel Prize in Physics for his work on quantum electrodynamics. Feynman spent much of his career working to understand better the laws and implications of quantum mechanics—the rules that dictate the bizarre behavior of matter at the scale of individual atoms and particles. He foresaw how quantum mechanics could lead to the development of nanotechnology and even a quantum computer that could solve problems that would be intractable for conventional computers. Over two days, IQIM hosted two events to celebrate that vision by exploring the research and development currently underway at what might be called the quantum frontier.

The first event, "One Entangled Evening," aimed to delight, educate, and inspire an audience not only of scientists and engineers but also of artists, entertainers, and members of the public. Among the highlights of the evening were a video tribute to Feynman by Microsoft cofounder Bill Gates; a song and dance about quantum mechanics performed by artist Gia Mora and John Preskill, the Richard P. Feynman Professor of Theoretical Physics at Caltech and director of IQIM; and a screening of a short video titled Anyone Can Quantum, narrated by actor Keanu Reeves and featuring actor Paul Rudd playing a game of "quantum chess" with renowned physicist Stephen Hawking.

The following day, IQIM hosted an all-day Quantum Summit that brought together scientists and engineers from academia and industry to discuss progress in the quantum realm.

One session featured a panel discussion about the future of quantum computers with researchers from Google, HP Laboratories, IBM, Intel, the Institute for Quantum Computing, and Microsoft. Moderated by Jennifer Ouellette, senior science editor at Gizmodo.com, the discussion started with brief descriptions of the approach that each company or institute is taking in the quest for a quantum computer as well as answers to the questions, "Why quantum computing, and why now?"

Ray Beausoleil leads the Large-Scale Integrated Photonics research group at HP Laboratories. His team is currently trying to put thousands of nonlinear optical devices on a chip and to get them interacting coherently—in a way that their quantum properties are not disturbed by outside noise. As for his answer to the "Why quantum now?" question, "If you're a big computer company, you're looking at quantum computing because you know that, depending on your point of view … Moore's Law is in danger of being over," he explained. "So we have to start thinking more energetically about what computing will look like in 10 to 20 years."

"People have been saying that Moore's Law was over since about the time Richard Feynman proposed the quantum computer," countered Jim Clarke, manager of quantum hardware and novel memory research at Intel. Intel was cofounded by Gordon Moore (PhD '54), the originator of Moore's Law—the 1965 prediction that the amount of processing power, based on the number of transistors in a circuit, will double about every two years. "My take is Moore's Law is not ending," Clarke continued. "In fact, I think we need at least a couple more generations of Moore's Law just to be able to enable a large-scale quantum computer."

IBM Fellow Charles Bennett said that IBM is working to get a small number of superconducting qubits to work coherently and to understand what those qubits are doing. "That is a tremendous task, and we're putting a lot of effort into that," he said.

Parsa Bonderson, a theoretical physicist from Microsoft's Station Q at UC Santa Barbara, said that while Microsoft is keeping its eyes on a number of approaches, its main focus is on topological quantum computing, an idea devised in the 1990s by Alexei Kitaev, now the Ronald and Maxine Linde Professor of Theoretical Physics and Mathematics at Caltech. The approach attempts to develop much more stable qubits, known as topological qubits, that would be less sensitive to the disturbances that destroy the quantum properties of all other qubits. (Jason Alicea, professor of theoretical physics at Caltech, provided an overview of topological quantum computing in an earlier session at the summit.)

And why now? Bonderson answered, "We're starting to really feel like this could be within reach this time."

Google, for one, seems to agree. The company made headlines in 2013 when it bought a system from D-Wave Systems, a startup company that has built an early prototype of a limited quantum computer. Google's main goal, noted its director of engineering Hartmut Neven, is "to get a practical quantum computer as quickly as we can."

What can be done with a quantum computer? Krysta Svore, a senior researcher in Microsoft's Quantum Architectures and Computation Group, works to address that question and presented a number of potential answers in a morning session at the summit. Some of the ideas that reach beyond improving scientists' ability to study quantum systems include improving machine learning and simulating chemicals and chemical reactions more precisely in order to facilitate drug design and improving machine learning.

Ouellette asked the panelists what they thought might be possible with a small quantum computer, perhaps with 100 qubits.

Ray Laflamme, executive director of the Institute for Quantum Computing at the University of Waterloo, in Ontario, said he would use such a computer to help train students, postdocs, and young faculty "to think quantumly."

Intel's Clarke spoke about modeling the dynamics of molecules, including ozone and carbon dioxide, which are just out of reach of conventional computers. "Well, that's climate change, so that resonates with a lot of people," he said. "If you go even further, you get into the protein space. … Misfolded proteins are the genesis of so many diseases—cancer, multiple sclerosis, and others."

Microsoft's Bonderson suggested that a small quantum computer might be useful for designing a better quantum computer. And Bennett reminded everyone that the quantum computer would likely do more than simply provide more processing power. "It's not going to be the solution to the supposed problem of the demise of Moore's Law. It's going to change things in a way that is more interesting," he said. "It's like saying if we've got radio, how much better does that make things than if we just had the telegraph or we just had post offices?"

Beausoleil added that he would not let himself try to determine how the quantum computer should be used. Instead, he said, "I'd put it online as rapidly as possible and let people who are not physicists start experimenting."

And Google's Neven talked about the potential applications of a full-fledged quantum computer in the artificial intelligence (AI) field. Noting that formulating fundamental laws of physics is extremely difficult and something that only a tiny fraction of people can do, he said, "The question is: Is this really a task that, as physics develops further, remains a human task? Or is this, rather, a task that we should hand over to machines?"

He said that he believed that forms of artificial intelligence could prove to be better physicists and that quantum computing would be involved. "I would dare to conjecture that the most creative systems we will ever see will be quantum AI systems," he said.

During other sessions at the summit, John Martinis of Google spoke about quantum simulation with superconducting qubits; Oskar Painter, the John G. Braun Professor of Applied Physics at Caltech, presented on acoustic quantum transducers; and David Wineland, a Nobel laureate from National Institute of Standards and Technology, described the latest thinking on entangled trapped ions.

IQIM, which spans Caltech's Divisions of Physics, Mathematics and Astronomy and Engineering and Applied Science, is a Physics Frontiers Center supported by the National Science Foundation and by the Gordon and Betty Moore Foundation. 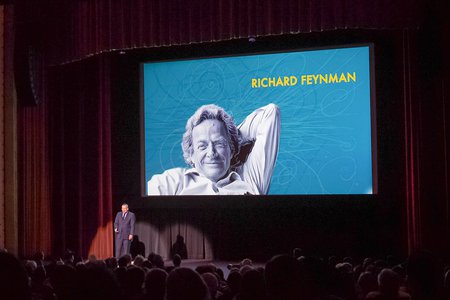 John Preskill, the Richard P. Feynman Professor of Theoretical Physics at Caltech and director of the Institute for Quantum Information and Matter, presenting during the "One Entangled Evening" event. Credit: Elizabeth Eisenstein Photography 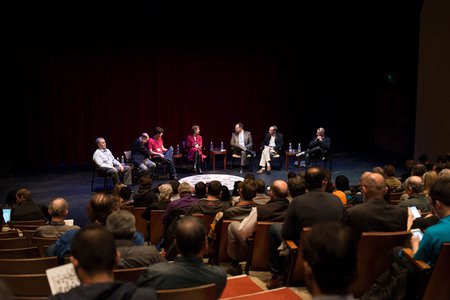 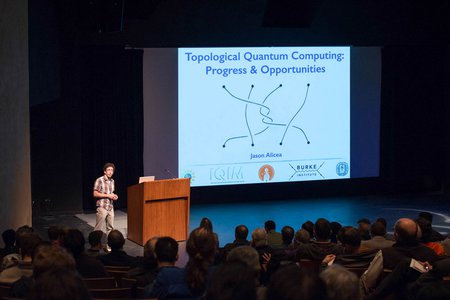 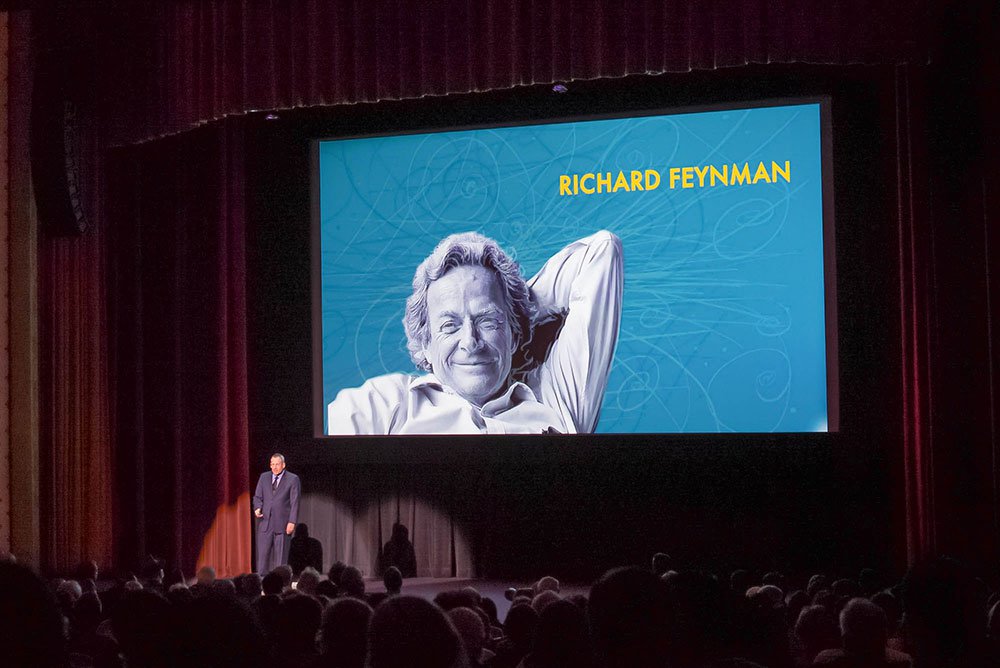 John Preskill, the Richard P. Feynman Professor of Theoretical Physics at Caltech and director of the Institute for Quantum Information and Matter, presenting during the "One Entangled Evening" event.
Credit: Elizabeth Eisenstein Photography
Download Full Image 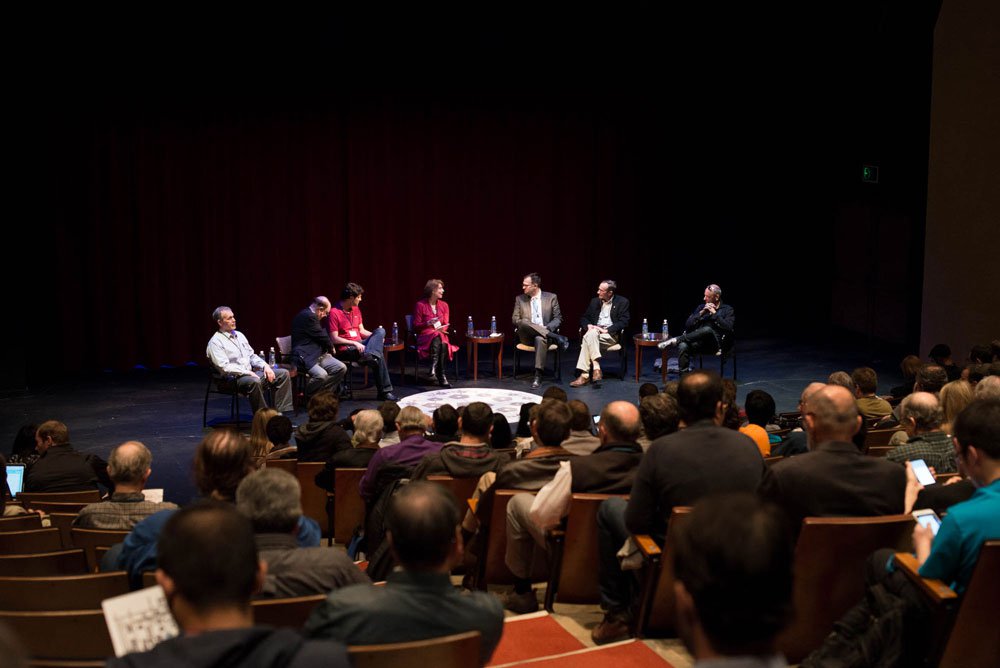 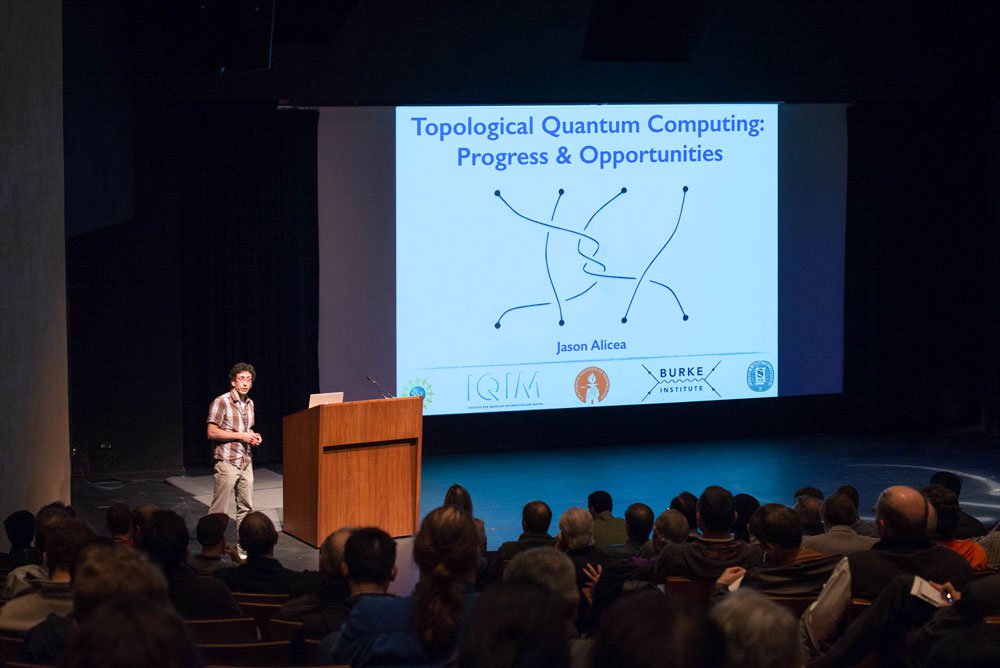