Skip to main content
Home  /  About  /  News  /  Consumers Will Pay More for Goods They Can Touch, Caltech Researchers Say

Consumers Will Pay More for Goods They Can Touch, Caltech Researchers Say

PASADENA, Calif.—We've all heard the predictions: e-commerce is going to be the death of traditional commerce; online shopping spells the end of the neighborhood brick-and-mortar store.

While it's true that online commerce has had an impact on all types of retail stores, it's not time to bring out the wrecking ball quite yet, says a team of researchers from the California Institute of Technology (Caltech).

Their investigations into how subjects assign value to consumer goods—and how those values depend on the way in which those goods are presented—are being published in the September issue of the American Economic Review.

The question they address is at the heart of economics and marketing: Does the form in which an item is presented to consumers affect their willingness to pay for it?

Put more simply, says Antonio Rangel, professor of neuroscience and economics at Caltech, "At a restaurant, does it matter whether they simply list the name of the dessert, show a picture of the dessert, or bring the dessert cart around?"

Most behavioral theories assume that the form of the presentation should not matter, notes Caltech graduate student Benjamin Bushong. "Some models suggest that choices amongst objects shouldn't vary with their descriptions or by the procedure by which the choice is made," he says. "However, our experiments show that the form in which the items are presented matters a lot. In fact, our research measures in monetary terms just how much those different displays matter."

Initially, the Caltech team made these measurements by presenting foods to hungry subjects in three different forms: in a text-only format; in a high-resolution photograph; and in a tray placed in front of the subjects. "Then we measured their willingness to pay for the food," explains Rangel.

As it turned out, there was no difference between the values subjects put on the food depicted in the text and in the picture. But the bids on the food on the tray right in front of the subjects were an average of 50 percent higher than the bids on either of the other two presentations.

"We were quite surprised to find that the text display and the image display led to similar bids," admits Bushong. "Initially, we thought people would bid more in the face of more information or seemingly emotional content. This finding could explain why we don't see more pictorial menus in restaurants—they simply aren't worth the cost!"

While the food experiments' results were intriguing, says Rangel, "We couldn't stop there." After all, the smell of the food might have made it more appealing to the experiment's subjects. And so, to take that variable out of play, the team chose different "goods" to present—a variety of trinkets from the Caltech bookstore—and again measured the effect of display on willingness to pay.

The results were the same as during the food experiments. The subjects were willing to pay, on average, 50 percent more for items they could reach out and touch than for those presented in text or picture form. "We knew then that whatever is driving this effect is a more general response," says Rangel.

But what was driving the effect? The team's initial hypothesis was that the behavior is driven by a classic Pavlovian response. "Behavioral neuroscience suggests that when I put something appetizing in front of you, your brain activates motor programs that lead to your making contact with that item and consuming it," Rangel explains. "We hypothesized that if there's no way for you to touch the item, then the Pavlovian motor response would be absent, and your drive to consume the item thus significantly lessened."

To test this hypothesis, the team put up a plexiglass barrier between the subject and the items up for bid. And, as predicted, once the possibility of physical contact with the item had been extinguished, the value the subjects gave to that item dropped to the same level as the text- and picture-based items.

"Even if you don't touch the item," says Rangel, "the fact that it is physically present seems to be enough. This Pavlovian response is more likely to be deployed when making contact with the stimulus is a possibility."

What does all this mean in the real world? At the very least, it suggests that your local bookstore—where you can reach out and ruffle a paperback's pages—may have more staying power than e-commerce experts might think.

In addition to Rangel and Bushong, the coauthors on American Economic Review paper, "Pavlovian Processes in Consumer Choice: The Physical Presence of a Good Increases Willingness-to-pay," are former Caltech undergraduate student Lindsay King and Colin Camerer, the Robert Kirby Professor of Behavioral Economics. Their work was supported by the Gordon and Betty Moore Foundation. 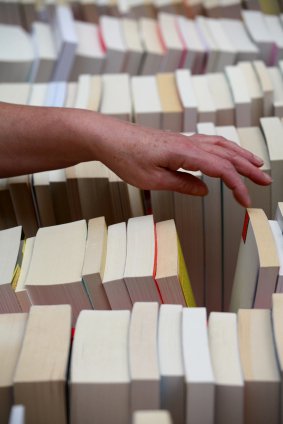